In 2019, the Visual Arts Department acquired a late eighteenth-century portrait of the merchant and philanthropist, Charles Weston (1731-1809). Born in Calcutta (Kolkata) of both Indian and British descent, Weston’s portrait is an important document of the Anglo-Indian community in India. 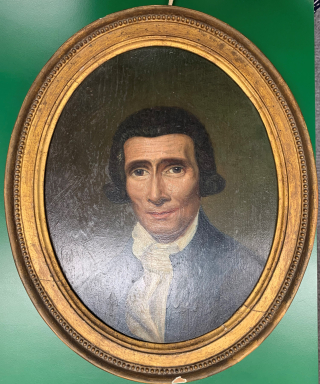 His father was William Weston, registrar of the mayor’s court in Calcutta. Little is known of his mother, although she may have been Mrs. Mary Ballantine who married a William Weston in 1731 (Hawes 2004).

Weston had an accomplished career despite the obstacles he would have faced as someone of mixed ancestry. He began as an apprentice to the surgeon John Zephaniah Holwell (1711-1798), who became a lifelong friend and provided Weston with capital to start his business. Weston accumulated his wealth through commerce, investment in property, and sheer luck – in 1778, he won Tiretta’s Bazar in the Calcutta lottery, which was worth Rs 196,000 and provided him with a monthly earning of Rs 3,500 (Hawes 2004). An eminent Calcutta citizen, Weston’s Lane in the city was named after him. He was also one of two Anglo-Indians to sit on the jury of the infamous trial of Maharaja Nandakumar in 1775 (Hawes 1996, 56). By the 1790s, Anglo-Indians would no longer be permitted to serve on Calcutta juries, and this was later amended in 1827 to allow Christians to serve (Anderson 2015, 14). Weston was married twice - to Amelia de Rozario in 1758, and after her death, to Constantia Weston. Constantia died in 1801 and was buried at the convent of Bandel, on the banks of the Hooghly River. A portrait of Constantia was published in Bengal Past and Present in 1915.

Weston was an active philanthropist and is said to have donated 100 gold mohurs monthly to the poor. He also served as the parish clerk for St. John’s Church, Calcutta. After his death, he left a charitable fund worth Rs 100,000 to be managed by the church and used towards poverty relief. His will also left bequests to many friends and dependents (Hawes 2004). 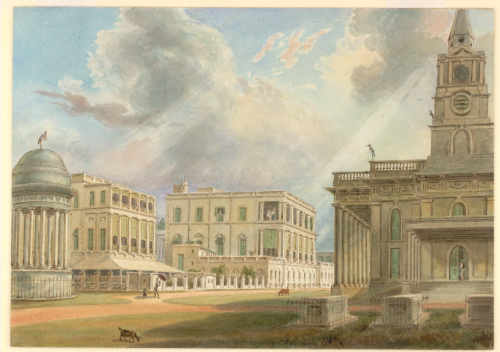 Another portrait of Weston is housed in the vestry of St. John’s Church. It shows Weston wearing a cotton handkerchief around his head, which he wore to keep warm when in his home as he suffered from rheumatism. A reproduction of this painting also features in the publication Calcutta Faces and Places in Pre-Camera Days produced by the Calcutta Historical Society in 1910.

Weston died in 1809 and his grave can still be visited at South Park Street Cemetery, Kolkata (Calcutta). His epitaph reads: he led a life marked “by benevolence and charity, seldom equalled, and never yet exceeded in British India” (The Bengal Obituary 1851, 94). He was survived by his eldest son, Charles Weston (1763-1813) and by his grandchildren.

The acquisition of his portrait complements archival materials already held within the British Library’s collection that are related to Weston’s life and estate. For instance, the India Office Records and Private Papers Collection contains a copy of his will (IOR/L/AG/34/29/22) and an inventory taken after his death (IOR/L/AG/34/27/41).

The Bengal Obituary: Or, a Record to Perpetuate the Memory of Departed Worth (1851), Holmes and Co.