The art of small things (1): Verse markers in Qur’an manuscripts from Southeast Asia

Studies of the art of the Qur’an usually start with the beautiful illuminated frames across two facing pages that are naturally the most visually striking parts of the book, but all too often the studies also stop there. In fact, it is often in smaller features that geographical origin is most readily determined, through deep-seated attachments to certain preferred formats of page layout. The British Library holds eight Qur’an manuscripts from Southeast Asia representing three regional traditions, with one from Patani on the East Coast of the Malay peninsula (Or 15227), three from Aceh on the northern tip of Sumatra (Or 15406, Or 16034, Or 16915), and four from Java (Add 12312, Add 12343, Or 16877) including one from the island of Madura (Or 15877). Drawing on these and Qur'an manuscripts from Indonesia digitised through the Endangered Archives Programme, we will explore the art of minor decorative elements in Qur’an manuscripts, starting with the smallest of all: verse markers. 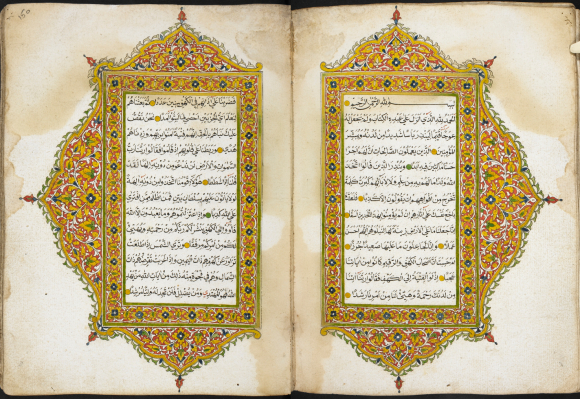 In the absence of punctuation in Arabic script, and to support correct recitation, from at least the 10th century onwards Qur’an manuscripts were generally copied with small graphic devices separating each verse or aya. In Qur’ans from Southeast Asia, these verse markers are invariably small circles, generally varying in size from between 3 to 7 mm in diameter, and with olour schemes that differ between regions. 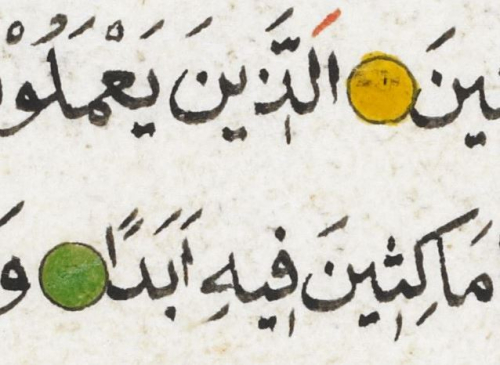 Detail from the Patani Qur’an shown above, with two differently coloured round verse markers, each 3 mm in diameter. British Library, Or 15227, f. 149v (detail)

Presented below is one line from each of the eight Qur’an manuscripts from Southeast Asia in the British Library, showing the start of the same verse (Surat al-Kahf, Q.18:8, ‘And lo! We shall make all that is therein a barren mound’), to show the shape and placement of the verse markers, with comments on each regional tradition.

On the East Coast of the Malay peninsula, Qur’an manuscripts normally indicate verse breaks with small red-ink circles.  More de luxe volumes, especially from the Terengganu school, have black or red ink circles filled with yellow pigment, and in the most lavish cases, gold. As shown above, the fine small Patani Qur’an in the British Library, Or 15227, has black circles filled with yellow (or occasionally green) paint. While copying the Qur’anic text, the scribe has taken care to leave enough space for the round verse markers to sit on the line adjacent to the words.

In the three Acehnese Qur’ans shown below, only in one manuscript (Or 15406) has space been left on the line to fit in the verse markers; in the two other manuscripts the verse markers have had to be placed above the line. In Aceh, verse markers in illuminated Qur’an manuscripts are nearly always black ink circles which are coloured in with yellow. This colour scheme is found in all three Qur’an manuscripts from Aceh in the British Library shown below, although on the page in question in Or 16034, the scribe has forgotten to colour in the verse markers, which have been left as black ink circles. In this manuscript, we can see clearly the small black ink dots that the scribe left while copying out the text to indicate the breaks between the verses, as a guide for placing the markers.

In Qur’an manuscripts copied in the Javanese tradition, verse markers are invariably red ink circles. In the four Javanese Qur’ans in the British Library, only in one manuscript are the markers placed on the line of writing, while in three others they are located above the lines. In all these manuscripts too we can see the scribal mark left to indicate where the verse markers should be placed, but in the Qur’an from Madura, the scribe has forgotten to draw a red circle around the second caret mark placed above the line at the end of the verse Q.18:8.

All these small scribal lapses are interesting because they serve to illustrate clearly the three-stage order of working: firstly, the scribe would copy the text, usually placing a small black mark to indicate clearly the placement of a verse marker. After the text was completed, the next stage was to draw in with red or black ink the circles of the verse markers. If the markers were to be coloured, the third stage was to fill them in with pigment.

The round verse markers in Qur’ans from Southeast Asia are indeed the smallest artistic elements in the manuscripts, but they are also the basic buildings blocks of more elaborate graphic devices that sometimes blossom into remarkable artworks. These are used to indicate larger textual divisions such as juz’ or thirtieth parts of the Qur’an and subdivisions thereof, or the ends of suras or chapters. These composite roundels can range from the very basic models found in Javanese manuscripts to more artistic illuminated compositions in Acehnese Qur’ans, and can reach even more elaborate heights in other genres of manuscripts such as Kitab Mawlid texts. 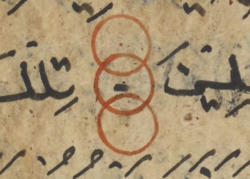 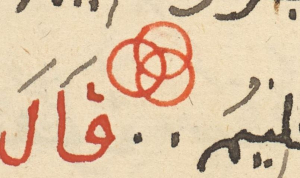 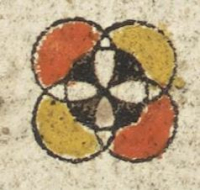 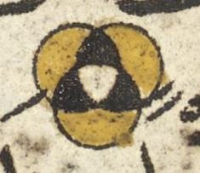 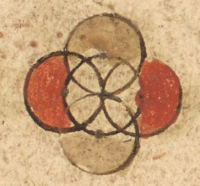 Coloured composite roundels marking subdivisions of a juz’ in Acehnese Qur’an manuscripts. British Library, (left and centre) Or 16915, (right) Or 15406.

As can be seen in the images, all the verse markers are perfect circles that were drawn mechanically with a compass, as is evident from the small black dot or indent discernible in the centre of nearly all the circles. The ubiquity of these perfect circles, in Qur’an manuscripts of every varying level of competence (for example, the Javanese Qur’an Or 16877 is copied in a very poor hand), suggests that rather than using a dedicated tool, they may have been made through an easily-learned scribal technique of somehow pivoting the nib of the pen around a sharp point. The use of a sharp-pointed implement is proven by some back-lit images taken to show the watermarks in a manuscript of a sermon from Kerinci, digitised through the Endangered Archives Programme (EAP117/9/1/3), which highlight the tiny holes created in the making of the composite roundels; similar observations have been made in Islamic manuscripts from Mindanao. However, the precise method of drawing these small circles, whether by using a tool or a technique, remains at present undocumented, and a field for future study. 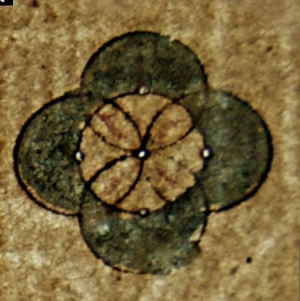 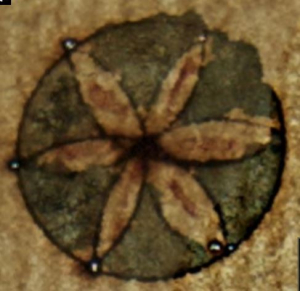 Pinprick pivot holes made in the paper during the creation of decorative composite roundels, in a sermon from Kerinci, Jambi, shown below, probably written in the 1830s. EAP117/9/1/3, 6 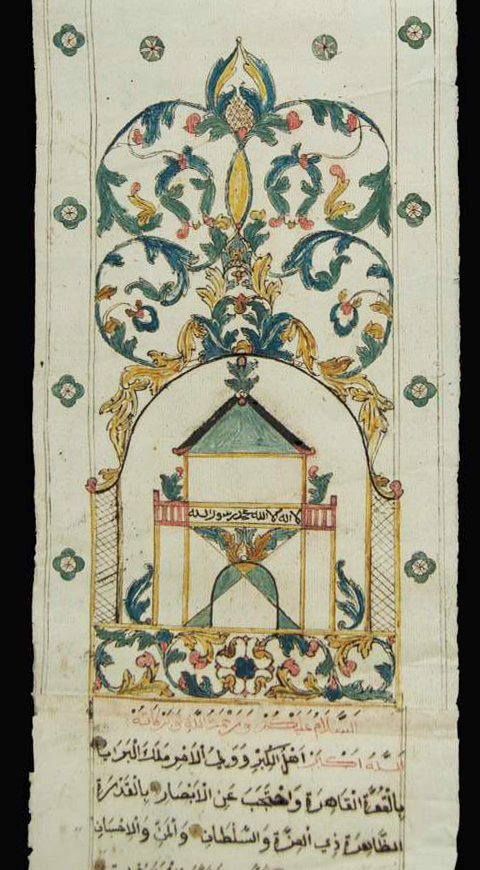 Occasionally small hand-drawn circles are also found in Qur’an manuscripts from Southeast Asia, and these are especially common in central Sumatra and areas in the Minangkabau sphere of influence, as in the Qur’an below.

This is the first of a five-part series on ‘The art of small things’ in Qur’an manuscripts from Southeast Asia in the British Library. The first part is on Verse markers; the second on Text frames; the third on Surah headings; the fourth on Juz’ markers; and the fifth and final part is on ruku' and maqra' Recitation indicators.

Posted by Annabel Gallop at 1:11 AM