Three Qur’an manuscripts from Aceh in the British Library

Aceh is renowned as one of the most fervently Islamic regions of Southeast Asia. Situated on the northern tip of the island of Sumatra, it was the site of the first Muslim kingdoms in the archipelago in the 13th century, and Aceh has also produced many famous Islamic scholars and writers. There are probably more illuminated Qur’an manuscripts known today from Aceh than from anywhere else in the Malay world, and nearly all conform closely to what can be termed the Acehnese style of manuscript illumination (cf. Gallop 2004). The British Library holds three Qur’an manuscripts from Aceh, and all have been fully digitised. An especially fine example of this genre is Or 16915, which has three superb pairs of illuminated frames and further marginal ornaments throughout the manuscript indicating standard divisions of the Qur’anic text into thirty parts of equal length or juz’. As can be seen in the illustration above, the text boxes on two facing pages are surrounded by rectangular borders, with the vertical borders extended upwards and downwards. On the three outer sides of each page are arches, and those on the vertical sides are flanked by a pair of ‘wings’ or foliate tendrils. The palette is centred on red, yellow and black ink, but the most important colour is the reserved white of the background paper, which carries the main motif, usually a scrolling vine. Gold is never used in the illumination of Acehnese Qur’an manuscripts. In the final pair of illuminated frames from the same manuscript, shown below, the arches are ogival rather than triangular, but all elements still conform to the precepts of the Acehnese style. 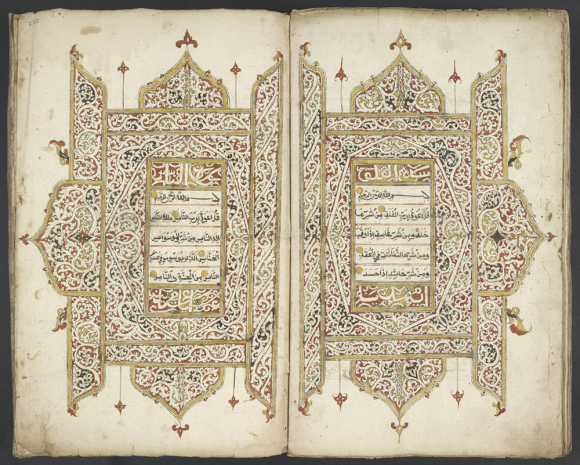 The other two manuscripts are simpler bibliographic productions, but both were also created with decorated frames at the beginning, middle and end of the book. However, Or 16034 is now missing the first few folios, and thus also the initial illuminated frames which it would undoubtedly have had. It still has illuminated frames in the middle, which, as is the case with all Acehnese Qur’ans, are located at the start of the textual mid-point of the Qur’an, at the start of the 16th juz’, in Surat al-Kahf, verse 75, indicated here with the line in red ink. Although the decorated frames are cruder in design and execution than those shown above, they illustrate well both the degree of conformity to, yet variation possible within, the parameters of the Acehnese style. 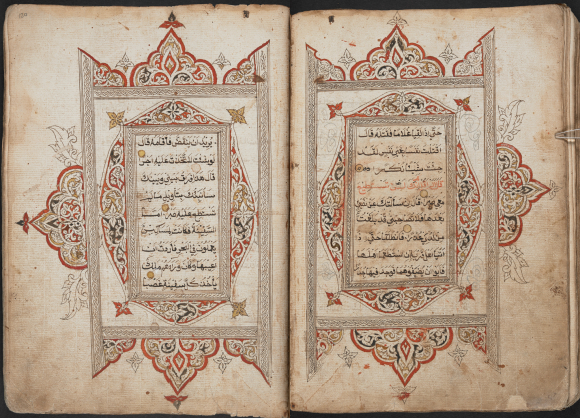 Probably the most interesting feature of this Qur’an manuscript is that the final pair of illuminated frames, which are located after the end of the Qur’anic text, were left blank. While at first glance it might be assumed that they were unfinished, in fact this is a distinctively Acehnese phenomenon, and scores of examples of such blank illuminated frames in Qur'an manuscripts from Aceh have been documented. In most cases they appear to have been designed to contain a prayer to be recited on completion of the Qur’an, or the final chapters of the Qur’an, or a repetition of the first chapter, Surat al-Fatihah. In Or 16034 the first words of a prayer have been written but the attempt then petered out, leaving only a few doodled pencil marks. 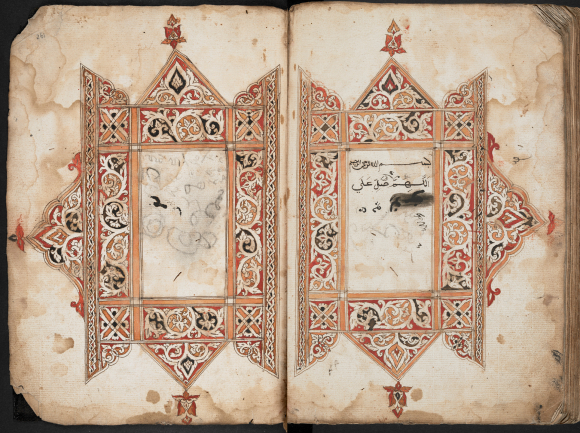 The third Qur’an manuscript, Or 15604, has three pairs of double monochrome frames. These should not be regarded as ‘unfinished’ examples of manuscript art, for so many examples of Acehnese manuscripts with monochrome decoration can be found that this should be regarded as a standard variant of the Acehnese style. In all other aspects, these decorated frames are typical of the Acehnese style save that, unusually, both the initial and final pairs of frames are lacking the arches and flanking tendrils on the outer vertical sides, although these are present in the (very damaged) middle frames. 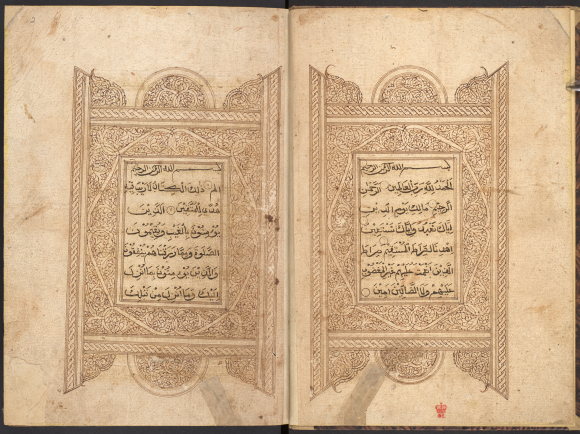 Monochrome decorated frames, without side arches, at the beginning of a Qur’an from Aceh, 19th century. British Library, Or 15406, ff. 1v-2r. 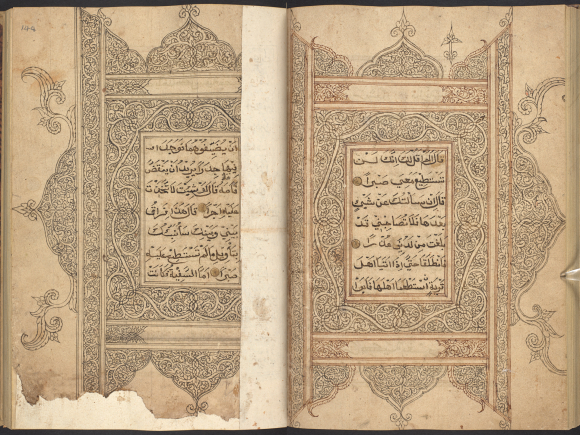 Both these two simpler Qur’an manuscripts display one of the most characteristic features of Acehnese illumination less evident in the finer Or 16915, namely the plaited rope border. This deceptively simple and seemingly universal motif is in fact fundamental to the Acehnese style, while almost never being encountered in Qur’an manuscripts from any other part of Southeast Asia.

All three Qur’an manuscript from Aceh in the British Library were produced with three pairs of decorated frames, albeit with differing degrees of artistry and finesse. However, Or 16915 is a much more lavish example of book art as all the textual divisions within the Qur’an are marked with beautiful marginal ornaments. The Qur’an is traditionally divided into thirty juz’ or parts of equal length to facilitate its recitation within a complete month, especially the blessed month of Ramadan.  Each juz’ can also be subdivided into regular fractions of half (nisf), quarters (rubu‘) and eighths (thumn), and all these divisions are indicated in Or 16915 with ornamented medallions placed in the margin. The start of each new juz’ is also highlighted with a small composite roundel composed of intersecting circles within the text itself, and by setting the first line within red-ruled frames and writing the first verse in red ink. In the other two Acehnese Qur’ans, Or 15406 and Or 16034, the first line of each new juz’ is also written in red ink, and in Or 16034 is usually also marked by a composite roundel, but there are no decorative devices in the margins. 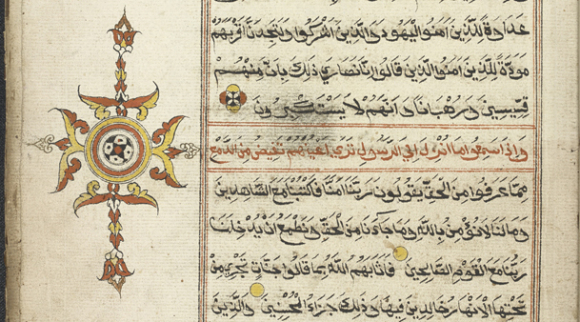 It is probably in the minor decorative features that the umbilical cord linking all three Qur’an manuscripts from Aceh is revealed most clearly. Thus all three manuscripts – despite evidently varying places and dates of production within Aceh – have text frames of exactly the same composition, namely a series of four parallel ruled lines (described from inside out) of red-black-red-black ink. This is the one of two frame schemes found in nearly all Acehnese Qur’an manuscripts, the other being the less common red-red-black (cf. Gallop 2007: 195).

Lastly, all three Qur’an manuscripts are also linked by the smallest common ornamental element: the aya or verse markers, which in Acehnese Qur’ans are invariably small black circles, drawn mechanically with a compass-like tool, coloured in with yellow pigment. 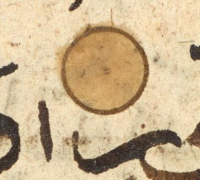 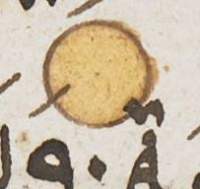 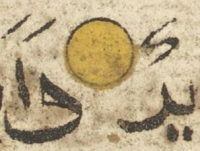 None of these three manuscripts is dated, but Or 16915 is written on English paper made by J Whatman watermarked with the date '1819', suggesting it was copied sometime in the 1820s.  The two other manuscripts are copied on Italian paper with the tre lune watermark of three crescent moons, indicating 19th century production. It is very rare to find colophons in Southeast Asian Qur'an manuscripts, but Or 15406 does have an endowment (waqf) statement at the end naming the owner:  Inilah Qur'an milik Teungku Ti orang baruh duduk pada nanggroe Lam Kubu tetapi Qur'an ini diwakaf pada tangan Teungku Abdul Kadir Lam Siwi intaha kalam tamma, ‘This is the Qur'an belonging to Teungku Ti, from the coastal lowlands, residing in Lam Kubu, but this Qur'an has been inalienably endowed into the hands of Teungku Abdul Kadir of Lam Siwi, finis.’ 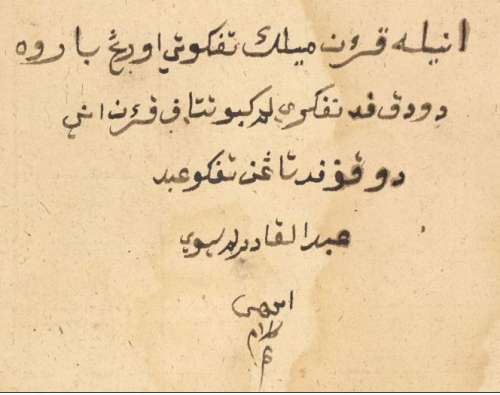 Posted by Annabel Gallop at 1:10 AM