The art of small things (2): Text frames in Qur’an manuscripts from Southeast Asia

At first glance, one of the simplest ways to identify a Qur’an manuscript in Southeast Asia – thus distinguishing copies of the Holy Book from the hundreds of other Islamic manuscripts written in Arabic script, whether in Arabic or in a local language such as Malay or Javanese – is that on every page, the text is usually enclosed within a frame. There are certainly other, non-Qur’anic, manuscripts with text borders, but probably no other Islamic text in the Malay world is so consistently presented with a frame on every page. At key junctures of the Qur'an, such as the first and last pages, or at the start of certain significant chapters, these frames may be exquisite artistic constructions, embellished with floral and foliate motifs, such as shown below in a Qur’an manuscript from Patani. However, even on all the other ‘regular’ pages in between, the text will still be framed. 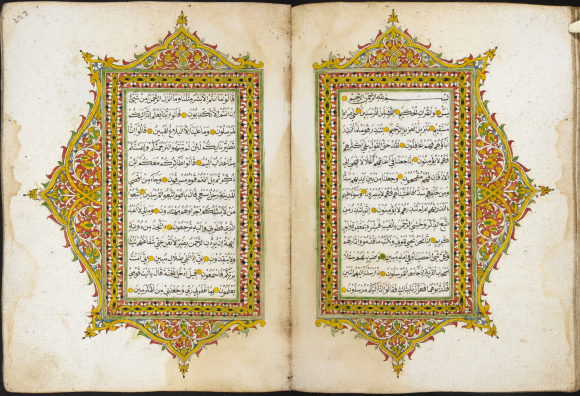 The text frames in Southeast Asian Qur’an manuscripts always consist of a series of ruled lines. The schematic composition of these frames – in terms of the colour and order of the lines – is extraordinarily faithfully adhered to within each region, although sometimes there may be more than one preferred pattern within a single region. Text frames can thus be a key indicator of the geographical origin of a Qur’an manuscript, and may help to identify a manuscript when a study of the larger decorated elements is inconclusive. Some of the most characteristic patterns of text frames will be explored below with reference to the small collection of eight Qur’an manuscripts from Southeast Asia held in the British Library, all of which have been fully digitised, as well as Qur'an manuscripts from Indonesia digitised through the Endangered Archives Programme (EAP).

Along the East Coast of the Malay peninsula, two standard patterns of text frames are encountered. Most of the smaller, simpler Patani-style Qur’an manuscripts will have text frames of three ruled lines, black-black-red (here and elsewhere I follow the convention of describing the lines from inside out). More lavish manuscripts, generally produced within the Terengganu school but also sometimes in the Patani/Kelantan style, will have a more complex set of frames of black-thick yellow-black-black-red lines, and in the most sumptuous manuscripts the yellow might be replaced with gold. The exceptionally fine small Patani Qur’an in the British Library pictured above (Or 15227) has these black-thick yellow-black-black-red frames on every page.

Text frames in a Qur’an from Patani of black-thick yellow-black-black-red lines, typical of the fine East Coast school. British Library, Or 15227

Similarly elaborate text frames – but with the red line constituting the innermost rather than the outermost frame – are also found in Qur’ans illuminated in the Sulawesi diaspora geometric style, including one held in Riau digitised through EAP.

Text frames in a Qur’an held in Kampar, of red-black-thick yellow-black-black lines, as typical of Sulawesi-style manuscripts. EAP1020/3/2

The prescriptions for frames for Qur’an manuscripts from Java are rather less rigid, but nonetheless still distinctive of their origin. Javanese Qur’ans generally have frames of a series of ruled black lines, most commonly three, but sometimes two or four. These lines may either be spaced evenly or clustered, but the most common pattern – as demonstrated by Or 16877 – is for a frame of three ruled black ink lines, with the inmost two lines close together, with a larger space before the outer line. Examples of the frames in the four Qur’an manuscripts from Java in the British Library are shown below.

In my previous blog post looking at verse markers in Qur’an manuscripts from Southeast Asia, it was noted that ‘errors’ or lapses by scribes were extremely valuable in signalling the various work stages of copying a Qur’an manuscript. It could be seen that firstly, the scribe would copy the text, usually placing a small black mark to indicate clearly the placement of a verse marker. After the text was completed, the next stage was to draw in with red or black ink the circles of the verse markers. If the markers were to be coloured, the third stage was to fill them in with pigment.

Looking closely at text frames, it is also thanks to certain problems encountered by the scribes that we can be certain that in general, the text frames were added after the text was written on each page, not before. This becomes clear when we see that, in all three Qur’ans from Aceh, when the scribe realised that he had left out part of the text, he was able to supply the mising words before the frames were added. The frames, therefore, had to step around the additional words, which was done as neatly as possible. In one of the Qur'ans, we even find that three full pages were left out – perhaps forgotten – during the task of adding text frames to the book.

The text frame steps up and then down to accommodate some added words in a Qur’an from Aceh. British Library, Or 16915, f. 207r

Probable scribal miscalculation leads to a stepped text frame in a Qur'an from Aceh. British Library, Or 15406, f. 204r

The text frame detours around some words which the scribe has added vertically at the end of a line, in a Qur’an manuscript from Aceh. British Library, Or 16034, f. 9r 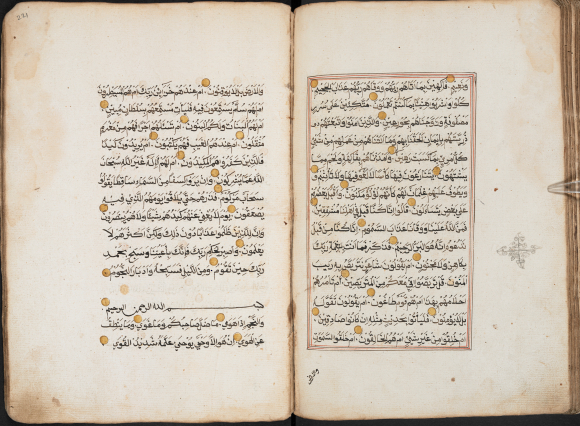 This is the second of a five-part series of blog posts on ‘The art of small things’ in Qur’an manuscripts from Southeast Asia in the British Library. The first part is on Verse markers; the third on Surah headings, the fourth on Juz’ markers, and the fifth and final part on ruku' and maqra' Recitation markers.