The Term 'Shater' and its Use in the India Office Records 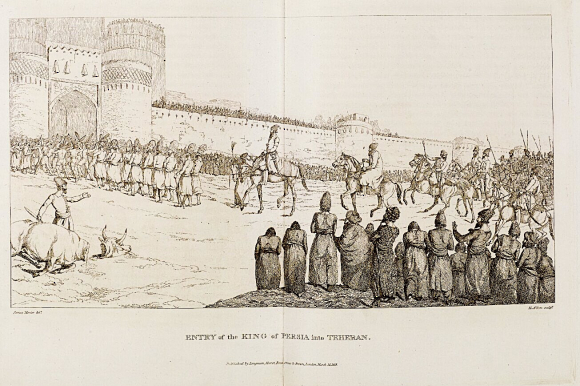 Entry of the Shah of Persia, Fath ‘Ali Shah Qajar, into Tehran preceded by a long row of shaters. Morier, A Second Journey..., after p. 386. Public domain

As part of cataloguing the India Office Records (IOR), we occasionally come across unfamiliar terms that make us question their origin and how they relate to the way they are used in the records. The case under consideration here is the term shater (pl. shaters), used in the IOR to refer to foot messengers. Shaters were employed to travel long distances, usually within Persia [Iran], in short periods of time to deliver letters to and from local governors, merchants, or the East India Company’s representatives. This post traces the possible roots of the term shater, and its development throughout history to bear the meaning of a foot messenger. Arabic language dictionaries indicate that the term shater (Ar. shāṭir pl. shuṭṭar) has its origins in the root sh-ta-ra, which primarily means to distance oneself from family or tribe; someone who is shrewd at finding ways to do things, or overcoming obstacles. These meanings relate directly to a group known in Pre-Islamic Arabic literature as al-Sa‘alik [Brigands]. Members of this group were exiled by their tribes, and sometimes they chose to distance themselves. As they grew up alone, they developed their own life-style, and adopted certain characteristics that distinguished them from others. They were said to be ‘sharp, brave and as agile as horses’ (Dayf, Tarikh al-Adab al-‘Arabi, pp. 375-378). An Arabic proverb indicates how agile a person is by comparing him to one of the Sa‘alik, who was also a famed poet, called al-Shanfara. The proverb says:

Some Sa‘alik were also known to be crafty thieves and sometimes noble robbers who stole from the wealthy to feed the poor:

The Sa‘alik’s lifestyle helped them to become familiar with trade routes, and some of them began to earn their living by protecting trade caravans instead of raiding them. Merchants recruited some of the Sa‘alik to walk ahead and protect them from possible attacks.

Several groups that were similar in nature to the Sa‘alik emerged in the early ‘Abbasid period (750-1258) under various names and characteristics. Among them were the shuttar. These were often associated with another group known as al-‘Ayyarin, vagabonds who appeared to drift aimlessly from one place to another. Besides sharing the Sa‘alik’s characteristics, the shuttar were well-organised, and worked collectively under an elected leader. They possessed a revolutionary spirit, leading popular resistance against corruption and social norms. Although some considered the shuttar to be anarchists (fawdawiyyin), the group was actually a socialist movement engaging in class struggle (al-Najjar’s Hikayat al-Shuttar, pp. 135 and 396). The shuttar were even condemned as ‘trouble makers’ by the authorities of medieval Baghdad (Hikayat al-Shuttar, pp. 126-127).

Nonetheless, the group became particularly popular during the reign of Harun al-Rashid (r. 786-809), who won them over to use their strength to put down disorder in his capital. Reportedly, a large group of shuttar played a crucial role in the fitna ('dispute') of 811-812 CE, between al-Rashid’s two sons al-Amin (r. 809-813) and al-Ma’mun (r. 813-833). The shuttar’s rebellious nature enabled them to impose new laws where existing ones were unpopular, something which earned many of them public admiration and they eventually became more accepted by the authorities.

By the mid-ninth century, the role of a shater had evolved from being a trouble-maker to someone who worked closely with the authorities. Governors arranged festivals, where they enjoyed watching the shuttar engage in ritual combat where the winner would be offered a silk kaftan and join the governor’s special guards. Henceforth, the shuttar were recruited as soldiers with a distinctive uniform. Under their own leadership, they marched ahead of the royal army. Some shuttar, however, continued to work as paid guards of trade caravans in much the same way as the Sa‘alik of the pre-Islamic period.

Because of their nomadic lifestyle, the shuttar became familiar with landscapes, languages and dialects, which perhaps helped them to be recruited as foot messengers. This was particularly true of the Persian Court shaters, who in addition to their role as the Shah’s special guards, also worked as foot messengers. One of the foremost Arabic lexicons that defines the term shater as foot messenger is the Taj al-‘Arus by al-Zabidi (d. 1790/1). In addition to the usual meanings of the term shater, al-Zabidi equates the term with a courier who delivers mail over long distances in a short period of time.

It is most likely that al-Zabidi was influenced by how the term shater was used in Persia at the time. Derived from the same Arabic root, in Persian the term shater means someone who is shrewd, fast, and fearless. In Safavid Iran (1501-1736), and probably before, the shater was said to act as a ‘bridge’, who ran before the horses of kings and other great men, opening the way for them to pass through the people. This continued to be the case in the Qajar period (1785-1925). Shaters were also appointed to the post of foot messengers during a special ceremony set for the occasion. References to shaters holding official positions as foot messengers in Safavid and Qajar Iran appear regularly in the IOR. One of the records gives a description of shaters, wearing special garments, during a special election ceremony as swift runners, who preceded the Shah of Persia’s retinue. 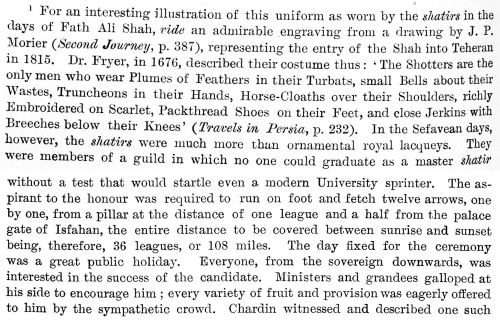 While some Arabic dictionaries from the 18th century onwards described the term shater as a foot messenger, this was not how it was used by Arabic speakers. Instead, the term kept its initial meaning and developed an additional complimentary one. Today, describing someone as shater is considered a compliment. When translated into Persian, the term was first used with reference to a special guard who preceded the Shah’s army. However, the characteristics of a shater led to the development of a new position as part of an already well-established Persian postal system. Although the office of a shater seems very similar in nature to that of a chapar (horse-mounted messenger), the former would have differed by travelling on foot for most of his journey. Whether shaters had to occasionally use horses during their journey or not, a detailed study of the Persian postal system could answer this, something which is beyond the parameters of the present article. 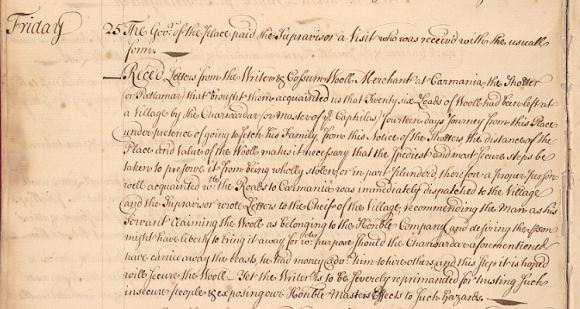 It would be difficult to establish exactly when the term shater was first used to refer to a foot messenger, yet it can be assumed that this was the case at least since the early Safavid period. Although it originates from Arabic, the term shater with its new meaning became a particularity of Iranian culture. Similar to the Sa‘alik, and ‘Abbasid Baghdad’s shuttar, the Persian shaters were swift runners; brave; familiar with the landscapes and the languages of the people they met on their journeys; and above all, they were trusted by the ruling power who appointed them as foot messengers.