The British Library has an unrivalled collection of Zoroastrian manuscripts and therefore welcomed the opportunity to display three of its Zoroastrian treasures in the current exhibition Epic Iran organised by the V&A with the Iran Heritage Foundation in association with The Sarikhani Collection. The exhibition is open until 12 September 2021 by ticketed admission only. Tickets must be purchased in advance and are released on Tuesdays at 12.00.

The exhibition covers approximately five millennia of Iranian history and is the first of its kind since the Royal Academy's International Exhibition of Persian Art of 1931. Arranged in nine sections it explores and brings together the whole range of Iranian material cultures from the earliest known writing to the 1979 Revolution and beyond. Out of around 300 exhibits, the British Library contributed fifteen manuscripts which will be the subject of two blogs. In this first post I will focus on the three Zoroastrian items.

Zoroastrianism, the religion of the ancient Iranians, owes its name to Zarathushtra (Zoroaster) whose hymns (Gathas) are thought to have been composed 1500-1000 BCE. It teaches the importance of good thoughts, words, and actions, in a dualistic cosmos where the forces of the All-knowing Lord, Ahura Mazda, are constantly opposed by those of the Evil Spirit, Angra Mainyu. Originating in Central Asia, Zoroastrianism spread east to China and south to Iran where it became the main religion from the sixth century BCE until the mid-seventh century CE. After the arrival of Islam, Zoroastrian refugees from Iran established settlements in Gujarat, India, where they were called Parsis (‘Persians’). Zoroastrian diaspora communities have since become established worldwide.

Zoroastrianism is essentially an oral religion. The oldest scriptures, referred to as the Avesta or Zend, are in an Old Iranian language, Avestan. They were not written down, however, until around the sixth century CE during the Sasanian period, many centuries after their composition. Even after that, the main liturgical texts were transmitted orally. This is partly the reason that, apart from the Ashem vohu fragment mentioned below, there are no manuscripts surviving from before the end of the thirteenth century. 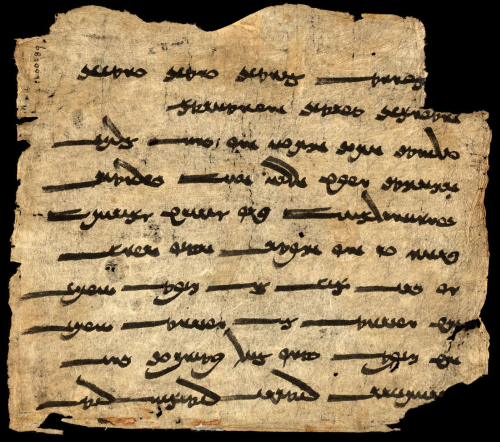 The Ashem vohu prayer transcribed in Sogdian script, dating from around the ninth century CE (British Library, Or.8212/84). Public domain

This fragment dates from around the ninth century CE and comes, not from India or Iran, the lands associated today with the Zoroastrianism, but from Dunhuang in Central China, where it was discovered in the Mogao caves by Aurel Stein in 1907. It contains a short text in Sogdian (a middle-Iranian language) about the prophet Zarathushtra followed by a phonetic transcription into the Sogdian script of one of the holiest Zoroastrian prayers, the Ashem vohu, composed originally in Avestan. Remarkably, the language of the prayer is neither recognisable as Sogdian nor Avestan, but is likely to represent a much older Iranian dialect, perhaps an archaic form of Avestan. The prayer must have been preserved orally in this ancient form, which remained unaffected by the codification of the Avesta in the Sasanian period, when the sacred texts were first written down (N. Sims-Williams, The everlasting flame, p.94).

Zoroastrianism was carried eastwards to China from the early centuries of the first millennium CE by Sogdian traders, whose homeland was the area of Samarkand in present-day Uzbekistan. This document provides written evidence for its continuation there up to the ninth century and, more importantly, it is the only example of its kind, dating from about four centuries earlier than any other surviving Zoroastrian text. 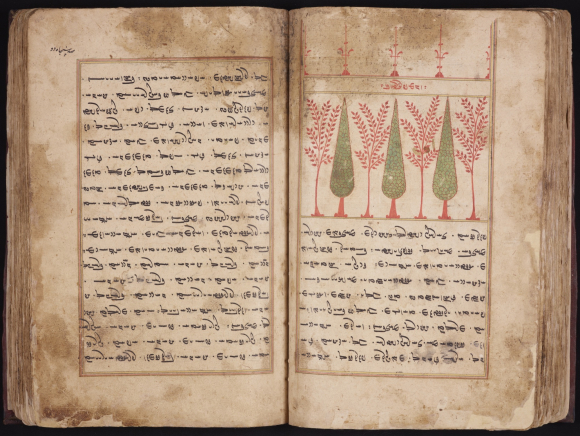 The Videvdad Sadah is a liturgical presentation in Avestan of the most important of Zoroastrian legal works, the Videvdad (‘Law repudiating the demons’). The text, described as sadah (‘clean’), i.e. unaccompanied by any commentary, is recited in a ritual context. This opening shows the beginning of chapter nine which concerns the nine-night purification ritual (barashnum nuh shab) for someone who has been defiled by contact with a dead body.

Most of our Zoroastrian manuscripts originate from India, copied by and for the Parsi community which traditionally emigrated from Iran from about the eighth century onwards. This beautifully written and decorated copy, however, was made in Yazd, Iran in 1647 by a Zoroastrian Mihrban Anushirvan Bahram Shah who copied it for a Zoroastrian of Kirman called Marzban Sandal Khusraw. Whereas Zoroastrian manuscripts are generally unillustrated except for small devices such as verse dividers and occasional diagrams, this one, exceptionally, contains seven coloured illustrations six of trees and one diagram. The heading here has been decorated very much in the style of contemporary illuminated Islamic manuscripts.

This copy was most likely brought to India from Iran by the Iranian poet and writer, Siyavakhsh Urmazdyar, himself a descendant of the original patron, in the mid-nineteenth century before being acquired by Burjorji Sorabji Ashburner (fl.1817-1895), a successful Bombay businessman who presented it the Royal Society, London in May 1864. Transferred to the India Office Library in 1876, it was incorporated into the British Library collection in 1982. 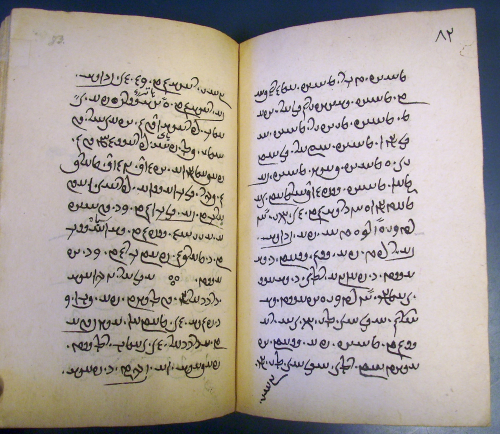 The Bundahishn, or ‘Primal Creation,’ is perhaps the most important Zoroastrian work on cosmogony and cosmography. Composed in Pahlavi (Middle Persian) during the early Islamic period, it is conventionally dated to the ninth century. It presents the Zoroastrian world view beginning with a detailed account of the perfect creation of the All-knowing Lord, Ahura Mazda (Ohrmazd in Middle Persian), which was attacked by the Evil Spirit, Angra Mainyu (Ahriman), and contaminated with disease and death. The cosmic drama culminates in the resurrection of the dead and the defeat and removal of Evil from Ohrmazd’s world and its perfection at the end of time. The cosmographic parts of the text include descriptions of the world’s lands, rivers, lakes, mountains, plants animals, and human races.

The text of the Bundahishn is preserved in two distinct versions, an Indian and a more complete Iranian one. This manuscript gives the text of the Indian Bundahishn and is written in Pazand, a phonetic Avestan script. Copied in India in the seventeenth or eighteenth century, it was acquired by East India Company surgeon Samuel Guise (1751-1811) while working at the East India factory at Surat and was purchased by the East India Company Library after his death.