Motherhood: A Form of Emancipation in the Turkish Minority Press in Bulgaria (1878-1944) 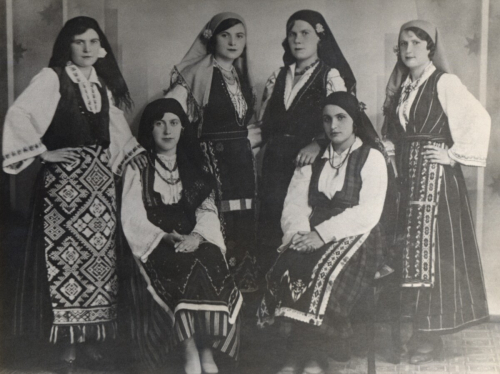 A portrait of urban women in traditional dress from the Bulgarian Ethnographic Institute and Museum. (EAP103/1/2/7)

Delving into the history of feminist activism and women’s rights with the Unfinished Business: The Fight for Women’s Rights exhibition at the British Library was absolutely inspiring. All the more amazing, as a budding researcher interested in the emancipatory activities of women belonging to ethnic minority groups in the late Ottoman and early republican periods, was giving an ear to Turkish women’s voice from the ‘margin.’ For the first time, it provided me with a surprising perspective, through digitised periodicals from Bulgaria (EAP696). What problems did the Turkish women of Bulgaria have? From which ideas were their writings pertaining to the woman question influenced? Or were they limited by which socio-cultural dynamics? Well, then, let’s have a brief look at how women’s rights were defended in the publications of the Turkish minority group in Bulgaria between 1878-1944. 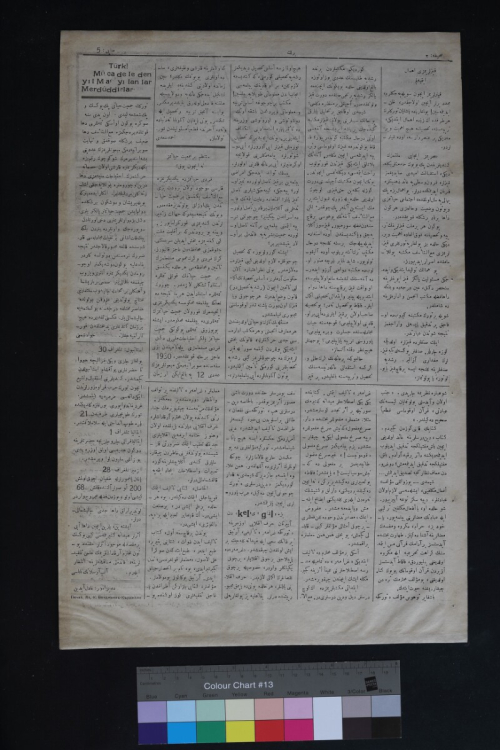 A page from the Turkish-language newspaper Birlik, published in Bulgaria, showing the transition from Arabic to Latin scripts. (EAP696/1/16)

As is known, with the Berlin Treaty (made after the 1877-78 Ottoman-Russian War), the Principality of Bulgaria became autonomous, a Christian governor was appointed to Eastern Rumelia, and Macedonia was left to the Ottoman Empire on the condition of reform. Muslim Turks, who had constituted the overwhelming majority of the country’s population for centuries, became a minority for the first time. From this perspective, as a Turkish minority group in Bulgaria, little wonder that they constantly announced their national existence was in danger, mainly with the fear of losing their national identity as the overall discourse in the publications. That’s why their writings particularly emphasise the necessity of education, with the idea that their community should have had a national working system, too. The prevailing discussion is on the ideal of arranging a national way of life that responds to the contemporary needs of their community in Bulgaria.

Regarding women’s and girls’ education, their writings closely followed developments in Europe and Russia. But, they saw the Republic of Turkey as the most significant model in terms of reforms, which the Bulgarian Turks highly appreciated. While the countries of the world attached great importance to the upbringing and education of girls, disallowing sending Turkish girls to school by ignoring their education is presented as one of the biggest stumbling blocks. It was important to ensure that girls attend school, notably the rüşdiyye (Ottoman junior high school) which was opened in Istanbul for the first time in 1858. The school would affect their education and also their way of thinking and appearance. Neriman Hikmet, Ulviye Ahmet, Emine Sıtkı and Mediha Muzaffer are the only four women who wrote in the publications. Actually, I got to know Ulviye Ahmet for the first time thanks to this project. But I think she deserves to be much better known today. As the prodigiously prolific one in matters on women’s issues, in one of her writings in the journal Istikbal (Future) dated 31 March 1932, she informs the reader that women who didn’t have political rights gathered under the flag of “feminism”. Feminists were establishing organisations and fighting for their political rights. However, the woman, who worked with men in every field as his companion, was not yet promoted to the position she deserved in the political world. I think it is quite essential that she directly uses the word “feminism” here. Although the word was typically associated with being like a “witch” as a locus for the cultural negotiation of genders, the women’s struggle united under the ideal of feminism seems to have inspired Turkish women in Bulgaria, too. On the other hand, their “sisters” in Turkey, like Halide Nusret Zorlutuna, advocated strongly nationalist ideas that rejected Western imperialism by emphasising the differences between Turkish and European women regarding women’s morality. Turkish women sometimes openly blamed those who, according to them, imitated European counterparts who were bad mothers, for instance. So, while the term feminism was somehow regarded as foreign, individualistic, and contrary to traditional family norms, Ulviye Ahmet’s text occupies a noteworthy place.

This quotation from her other text written on 10 April 1932 from the same journal is again radical: “Perhaps there will be obstacles for us to embark on a social and national life with great love and affection. There will be those saying that a woman cannot gain a place in society, cannot show national resistance, she is a house bird, men’s pastime. But never forget to hope; who knows how their delusions will turn out? Don’t we have the strength to withstand all this?” Since society expects a lot of work from women, Ulviye Ahmet underlines they should try to be helpful to and shape society in every way. In that sense, she invites intellectual women to write about women’s progress. The regular letters sent with the title of “To Our Sisters in Turkey” make it obvious that they had a targeted addressee in Turkey, as well. She defends women’s rights to raise Turkish girls, would-be mothers of the nation in the future. They were the mothers of future generations of their poor nation oppressed under the harsh conditions of that time. Yes, “the mothers of the nation…” While I was reading the text, I was anticipating the inevitable topic – Motherhood.

At the end of the 19th century, Ottoman women’s strike for their rights was espoused as a pre-requirement for civilisation. They were principally responsible as mothers and wives and their status needed to be improved for the welfare of the Ottoman men and creating the enlightened generations. To raise responsible citizens of the Ottoman Empire, first, mothers should have been educated and enlightened, at least to some extent. That is, one of the projects built in the hope of reversing the inexorable dissolution of the Ottoman Empire was the modernisation of women. Then, in the Republican period and during the Kemalist regime in Turkey, Turkish women’s primary role as mothers and the process of women stepping into social life were again central themes of state-sanctioned modernisation projects and nation-building processes. 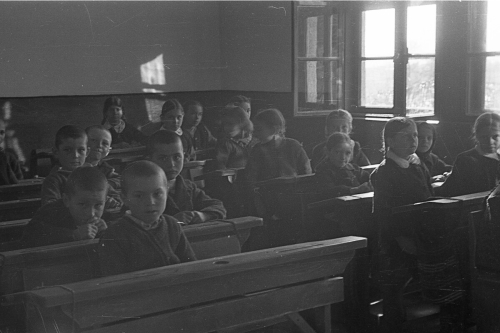 Girls at a school in Bulgaria in the early 20th century, from the archival collection of photographs taken by Rositza Angelova. (EAP618/3/1)

In line with the concern of reviving their national identity, the woman question was expectedly shaped around the same discourse among Turks in Bulgaria, too. Their following arguments for why girls should be educated may sound rather unbearable, at least they do to me, but it would also be good to bear in mind in some way that it was almost all they could do as a Turkish Muslim community at the turn of the century. According to the general attitude in the articles, written anonymously, the one born as a girl would “definitely” be a mother thereafter; they would be engaged in managing a house. The family life of an educated woman and an uneducated one couldn’t be the same. An educated woman would treat her husband in a much more pleasant way than an illiterate one. Women who have to know household management and the family economy well should have a bright mind. A woman needed to be educated to bring up her children properly by paying particular attention to their moral education. Therefore, mothers of the future should be raised as resilient women, capable mothers, and nurturers for the nation’s happiness - the most indispensable need of that time. The woman should never be humiliated because she is the mother of humanity; the future is in her bosom. 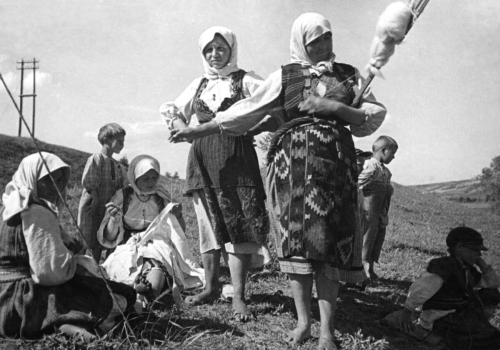 Rural Turkish women in Bulgaria prepare wool in an archival photograph from the Bulgarian Ethnographic Institute and Museum. (EAP103/1/2/7)

Ulviye Ahmet dwelled on the point that if women want to serve their nation as true mothers, they must be intensely concerned about schools, societies, and foundations, which constitute the cornerstone of their national existence. She reminds them that their sisters in Turkey had an enormous organisation called the Turkish Women’s Union (Türk Kadınlar Birliği). To establish cultural and social communities to assist their male friends, she thought that they must undertake a particular mission. “If we want Bulgarian Turkish women to be true mothers for generations, let’s work for our nation’s progress and rise. And let’s establish societies for the enlightenment of women,” she said.

There is no doubt that motherhood is a fascinating state, even just biologically. But to idealise motherhood nostalgically and evaluate the woman over a ‘blessing’ or ‘merit’ attributed to her by birth move the writings away from a feminist line in a sense we understand today. Women’s maternal role was an indispensable tool for the patriotic socialisation of the new generation and the Turkish community’s enlightenment and modernisation. To be a mother of the social existence, to represent her husband and children, to be the symbol of femininity and community is somehow to be imposed upon her to maintain traditionally constructed roles and the given ‘appropriate’ and ‘moral’ female identities imposed as ‘ideal’ by patriarchal society. 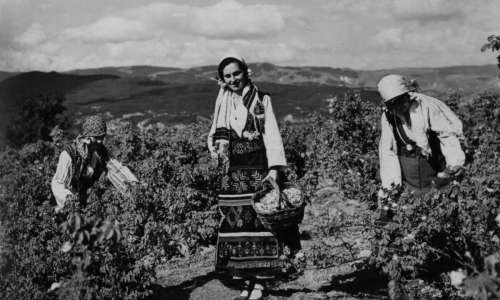 Women at work harvesting in rural Bulgaria in the early 20th century, in an archival photograph from the Bulgarian Ethnographic Institute and Museum. (EAP103/1/2/1)

It seems that only motherhood was at hand as the pre-requirement for the development of the Turkish community in Bulgaria, as no significant rights or values had been entitled to women until then. All articles about the woman question were always contextualised in a nationalist framework, too. And there is always a consciously moderate feminist discourse. Even so, they had no choice but to implement this way of writing, didn’t they? Women’s demands for their rights were always justified and legitimised through the ideal of serving the nation and their given roles as mothers and wives providing the nation with patriotic sons. Isn’t this conceptualisation as the creator of the Turkish nation already reasonably expected for a Muslim community worried about losing its national identity, or any other community in the nation-building process? Was there any other way for them to do it at that time?

What about now? In every corner of the world, a life where women are unburdened by and relinquish all the roles assigned them by ‘others.’ One where they have got rid of the social pressure that forces them to assume and maintain these roles; a life where they have no need to struggle to exercise their human rights and can freely underpin them when needed; a life where girls don’t emulate a passivised ‘princess’ against active ‘witches’ from childhood, ride their own horses, and gallop wherever they want instead of waiting for the Prince Charming: is such a life still too far away?

The images in this blog are for research purposes only. We ask that you not share them without express permission of the rights holder.