In a recent blog I wrote about three of our Zoroastrian treasures which were part of the  Epic Iran exhibition organised by the V&A with the Iran Heritage Foundation in association with The Sarikhani Collection. Sadly the exhibition is now over, but this second blog on the Islamic period manuscripts which we loaned can serve as a reminder for those who were lucky enough to visit, or as a visual reference for those who weren't so fortunate.

The exhibition was organised into broad themes, the first four on Iran up to the advent of Islam, the fifth section, The Book of Kings, acted as an introduction to Islamic Iran primarily through the epic Shahnamah (Book of Kings) completed by the poet Firdawsi around AD 1010. 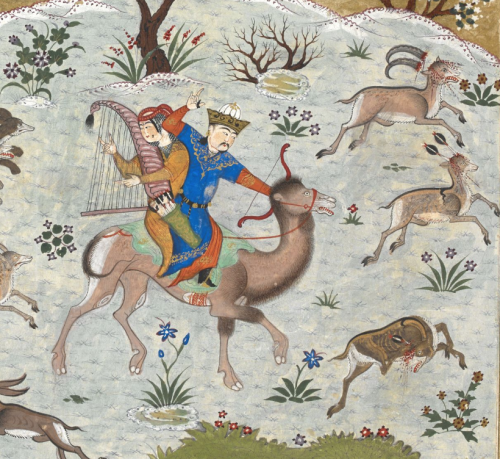 Tracing the history of the Iranian people from the beginning up until the defeat of the Sasanian ruler Yazdegird III in 651, the Shahnamah combines myth and tradition in what is perhaps the best known work of Persian literature. Many hundreds of illustrated copies survive today dating from the Mongol period onwards. The story depicted here, in a manucript dating from the Turkman/Timurid period shows Azadah, a slave-girl who was a fine harpist, riding behind Bahram on his camel on a hunting expedition. On this occasion Bahram performed the remarkable feat of shooting two arrows into one gazelle's head,  cutting off the antlers of another and hitting a third as it raised its foot towards its ear. When Azadah expressed sympathy for the gazelles instead of praise for Bahram’s skill, he took offense, flung her to the ground, and let his camel trample her.

The sixth section, Change of Faith explored Islam in Iranian culture, the transition from Arabic to Persian and the important Iranian contribution to Islamic science. 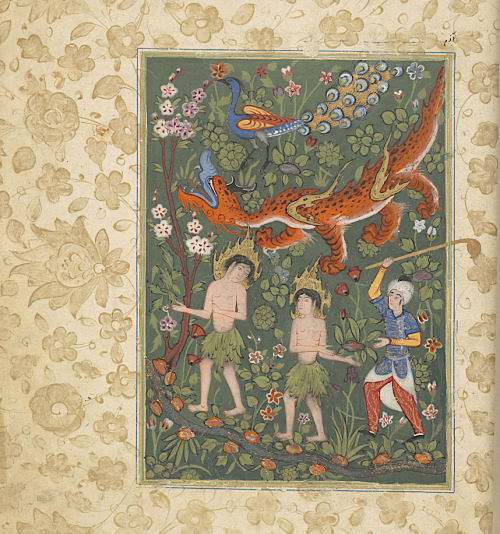 The expulsion of Adam and Eve from the Garden of Eden. Pursued by a figure with a club, Adam and Eve are accompanied by the peacock and dragon who, at Satan’s instigation, had been responsible for their fall. From the Qisas al-anbiya (Stories of the Prophets) by al-Naysaburi. Shiraz, Iran, 16th century (BL Add MS 18576, f. 11r) Public Domain

There are several different collections in Arabic and Persian with the title Qisas al-anbiyaʼ, stories adapted from the Qur’an and other Islamic literature. One of the best-known and most illustrated is the collection composed in Persian by the 12th century writer Ishaq ibn Ibrahim al-Naysaburi. Add MS 18576 illustrated here is one of sixteen known illustrated copies of al-Naysaburi’s compilation, all produced in Safavid Iran between 1565 and 1585. The portrayal of Adam and Eve agrees with a passage in the Qurʼan (Surah 20, verses 120-21) ʻSo the two of them ate of it, and their shameful parts revealed to them, and they took to stitching upon themselves leaves of the Garden.ʼ Their fiery haloes, however, indicate that they still had some phrophetic status. 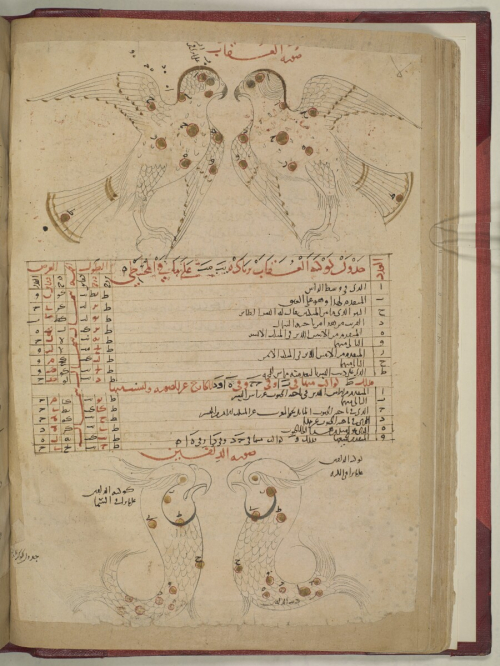 The constellations Aquila and Delphinus from the Kitab suwar al-kawakib (Book of the Images of the Fixed Stars) by al-Sufi. Iran, possibly Maragha, 1260-80 (BL Or 5323. f. 28v). Public Domain

The tenth-century Iranian astronomer ʻAbd al-Rahman al-Sufi (903–86) is the author of several important Arabic texts on the stars and is regarded as one of the greatest Islamic scientists. His most important text, represented here, is the Kitab suwar al-kawakib al-thabitah, based on Ptolemy's Almagest, in which he gives a full description of the classical system of constellations, observed both from the earth and from outside the celestial globe. The outlines of each constellation and the stars belonging to it are therefore drawn twice, their image mirrored in the second drawing.

Describing the rise of Persian poetry, the seventh section, Literary Excellence, was devoted to how Persian emerged as a literary language from the tenth century onwards. As a result of royal patronage poets flourished at court and workshops developed in which calligraphy, illumination and painting were practiced at the highest levels. 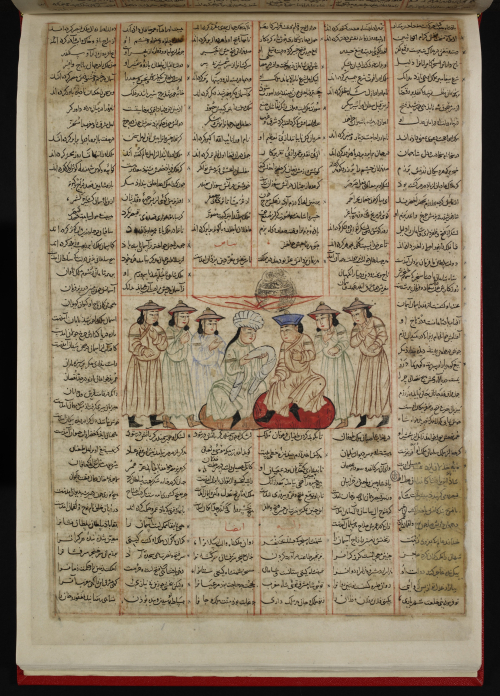 This manuscript, an anthology of poetry by Muʻizzi, Akhsikati, Adib Sabir, Qamar, Shams Tabasi and Nasir Khusraw, was very likely copied in Tabriz in the scriptorium of the Ilkhanid historian and vizier Rashid al-Din. Copied by ʻAbd al-Muʼmin al-ʻAlavi al-Kashi between Dhuʼl-qaʻdah 713 and Dhuʼl-qaʻdah 714 (February 1314–February 1315), it closely resembles other secular manuscripts prepared for Rashid al-Din during the same period. The manuscript contains altogether 53 illustrations in a simplified Mongol style, mostly depicting, as here, the poet receiving a robe of honour from Sultan Sanjar. 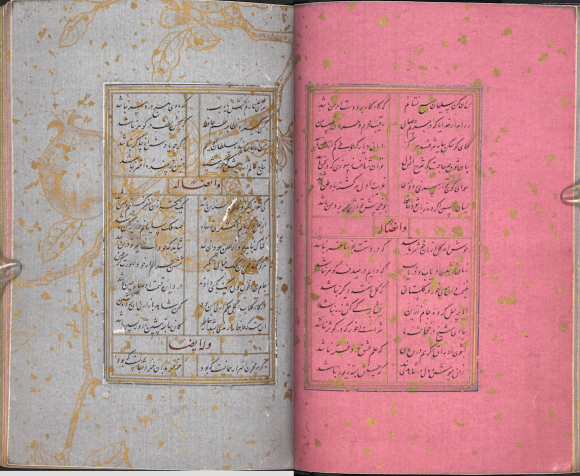 This early copy of the Divan of Hafiz (d.c.1389) was copied by Sulayman al-Fushanji in Ramazan 855 (October 1451). Although no place is mentioned in the colophon, the name of the scribe may be connected to Fushanj in the province of Herat, Afghanistan, possibly suggesting Herat as a place of origin. The paper is unusually heavy and includes 31 pages decorated with Chinese ornamentation containing designs of bamboos, pomegranates and other plants while twelve show Chinese landscapes and buildings. The decorated Chinese paper had originally been in the form of large sheets which were painted on before being cut up. The paper is dyed various shades of orange, pink, blue, yellow/green, grey and purple. Add MS 18113 contains three poems from the Khamsah (Five Poems) by Khvaju Kirmani (1290-1349?). The first, the story of the lovers Humay and Humayun, was completed in 1331 in response to a request to enchant Muslim audiences with a supposed ʻMagianʼ theme. The poems were copied by the famous calligrapher Mir ʻAli ibn Ilyas al-Tabrizi al-Bavarchi in 798 (1396) at the Jalayirid capital Baghdad. The paintings most probably belonged to another copy and were added afterwards. The artist of one of them was Junayd, a pupil of Shams al-Din who worked under the Jalayirid sultan Uways I (r. 1356-74), who inscribed his name on an arch in an illustration on folio 45v. The manuscript stayed in royal hands at least until the Safavid era when it was refurbished for the Safavid prince Bahram Mirza (1517-49), the youngest of the four sons of Shah Ismaʻil (r. 1501-24). 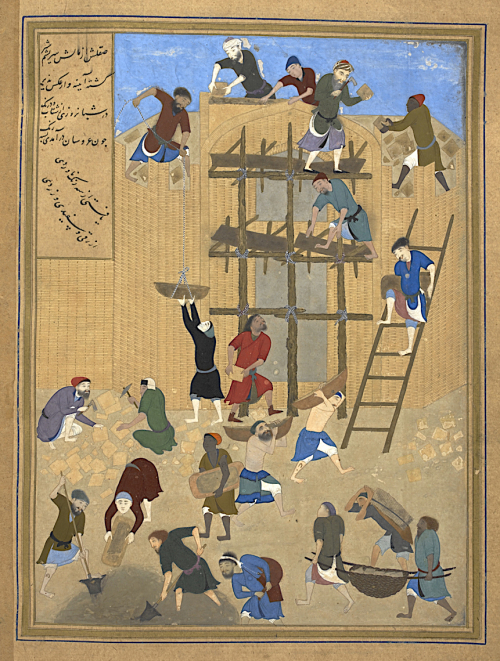 The building of the palace of Khavarnaq. From Nizami's Khamsah. Painting attributed to the master-painter Bihzad. Herat, late 15th century (BL Or.6810, f. 154v). Public Domain

This beautiful copy of the Khamsah (Five Poems) by the 12th century Persian poet Nizami entered the Mughal Imperial Library in Akbar's reign and was regarded as one of the most treasured possessions in his collection. Its importance lies chiefly in its decoration and illustrations which include paintings by the master-painter of Herat, Bihzad (flourished during the reign of the Timurid Husayn Bayqara, 1469-1506). ‘The building of the palace of Khavarnaq,’ ascribed to Bihzad in a note underneath, shows the structure of the pavilion: the scaffolding, a ladder, men chipping bricks, transporting them and actually positioning them on the building. 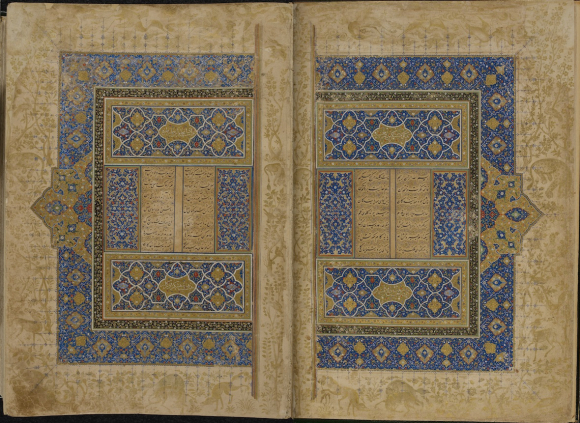 The opening of Nizami's Makhzan al-asrar, one of the five poems forming his Khamsah. Tabriz or Qazvin, (BL Or.2265, ff. 2v-3r). Public Domain 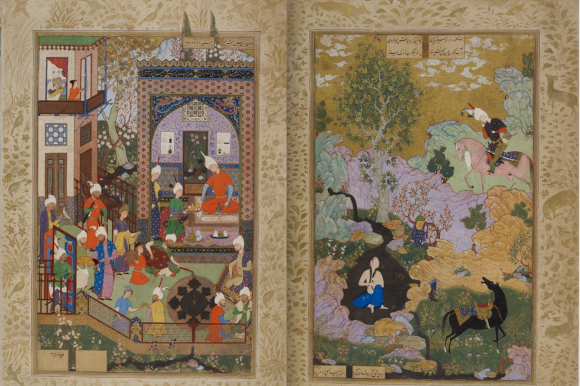 Or.2265, a 16th century copy of Nizami's Khamsah (Five Poems), is perhaps the most spectacular of our manuscript loans. Originally copied between 1539 and 1543 for the Safavid ruler Shah Tahmasp (r. 1524-76), it was augmented by the addition of 14 full page illustrations by some of the most famous court artists of the mid-16th century. Further pages were inserted probably during the 17th century, and again at a later stage, perhaps when the manuscript was rebound in the early 19th century at the court of Fath ʻAli Shah Qajar (r. 1797-1834) who in 1243 (1827/28), according to a note inside, presented it to his forty-second wife Taj al-Dawlah.

The ninth section The Old and the New focussed on the Qajar dynasty (1789-1925), introducing an element of modernisation and developing new relationships with Europe. 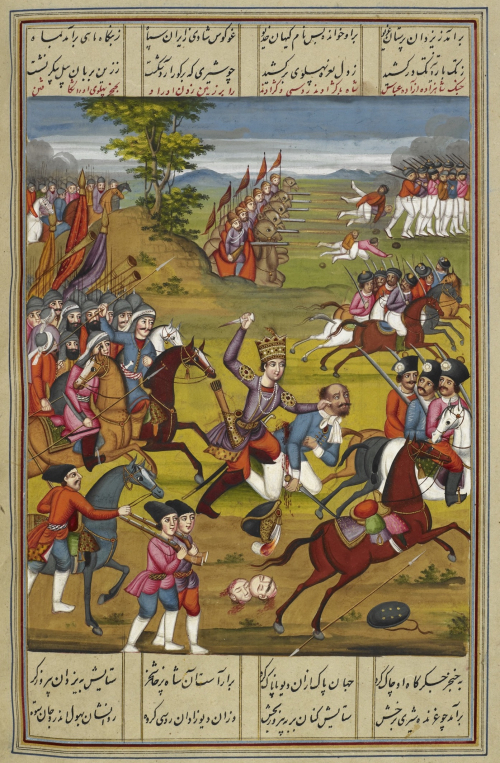 With Firdawsi's Shahnamah as a model, Fath‘Ali Shah commissioned the Shahanshahnamah (Book of the King of Kings) by the court poet Fath ‘Ali Khan Saba. Presented to the East India Company, this was one of several equally sumptuous copies given as diplomatic gifts to various European dignitaries. 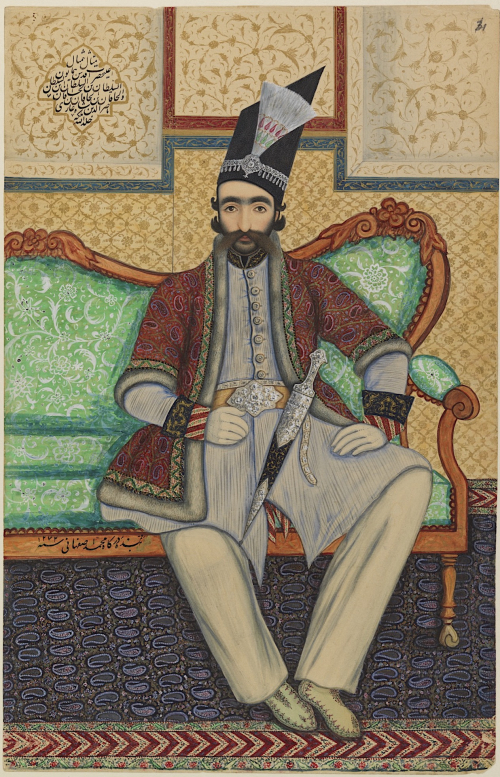 Although the exhibition has now closed, the published catalogue of Epic Iran is available by the three curators: John Curtis, Ina Sarikhani Sandmann and Tim Stanley Epic Iran: 5000 years of culture.

Most of these manuscripts have been digitised and can be explored by following the hyperlinks given above or by going to our Digital Access to Persian Manuscripts page. The following blogs also give further information:

Posted by Ursula Sims-Williams at 12:28 AM