Lu Tianjiao: The First Female Stamp Designer of the People’s Republic of China, 1934-2021

Since the nineteenth century, women of all backgrounds have been involved in postage stamp production. Primarily issued by governments for the prepayment of mail, stamps also carry complex visual, textual, olfactory, tactile, and audio messages making them inherently cultural. They are consequently an important channel through which women’s sustained contributions within the applied arts, design and print capitalism can be meaningfully assessed. The life and work of China’s first female stamp designer Lu Tianjiao, who sadly passed away on 1 August 2021, make these points manifestly apparent. 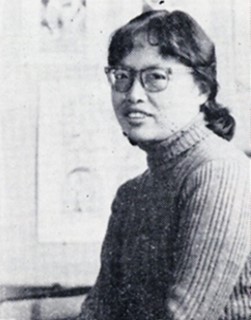 A portrait of Lu Tianjiao.

Born in Zhuhai, Guangdong in December 1934, she grew up in Shanghai, developing a love of art and painting from her father, a doctor and famous photographer named Lu Shifu. She enrolled at the Hangzhou State Arts School in 1950 before transferring to the Central Institute of Fine Arts, studying under prominent artists and stamp designers including Zhou Lingzhao, Zhang Ding and Zhang Guangyu. Graduating in 1954, she was assigned to work within the Ministry of Posts and Telecommunications’ Stamp Designing and Issuing section then attached to the Directorate General of Posts. 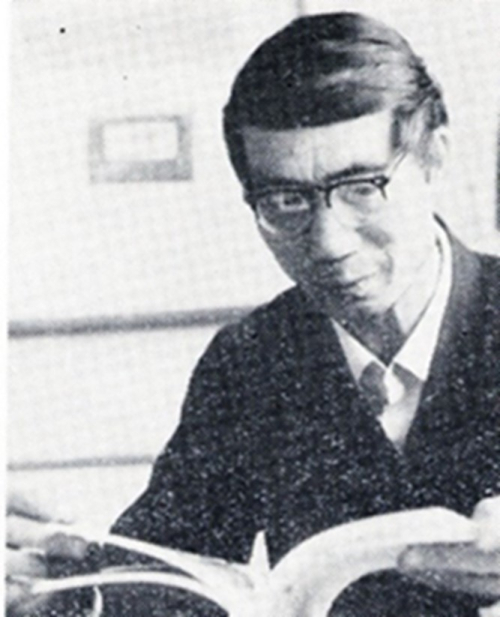 A portrait of Liu Shuoren.

At work, she regularly debated with colleagues about the best approaches to apply their technical skills on improving the quality of China’s stamp designs for miniature mechanical reproduction. She also met former schoolmate and fellow stamp designer Liu Shuoren, who sadly passed away on 11 August 2021. Outside work, the couple often visited stamp shops to purchase foreign stamps for research material. The couple married in 1960 and celebrated the birth of a son the following year, going on to support one another throughout their lives, being the first to review and analyse each other’s designs.

Lu Tianjiao’s career mirrors political changes within the People’s Republic of China under Chairman Mao and the early ‘Reform and Opening Up’ era. Producing regular work between the mid-1950s and mid-1960s, her output rapidly declined during the Cultural Revolution, possibly spending time, like some of her colleagues in a ‘May 7 Cadre School.’ A second steady stream of work followed between 1976 and 1985, when reforms in the procedure and selection of stamp designs resulted in a permanent decline in her work.

She retired in 2001 and was diagnosed with cancer shortly afterwards, which was successfully treated. In 2009, state media interviewed her, where reflecting upon her career, she concluded: ‘I have designed stamps for my country for fifty years and I have recorded the changes of our Republic in this small piece of paper. I am happy to witness and record our history. It has been an honour not all could have.’ As expected of officially state-sanctioned works of art, the designs cover various social, political, and economic themes. Holistically, they supply important insights into the heart, soul, and aspirations of the People’s Republic of China. 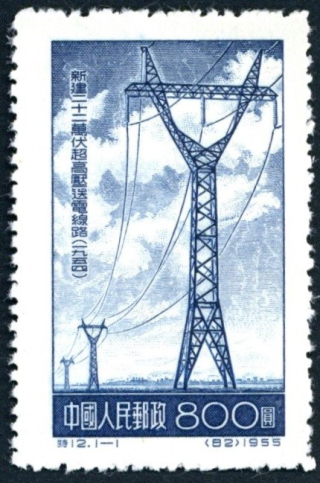 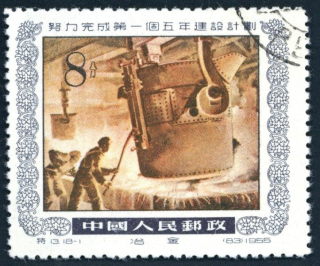 (Right) Lu, Sun and Dong's design celebrating the mid-point of the 5-year plan.

Coming to power in 1949, the Communist Government set about transforming China’s feudal economy into an industrial one via the collectivisation of its agricultural sector whilst initiating successive Five-Year Plans for large-scale industrial development. Lu Tianjiao’s first commission for the 26 February 1955 ‘Development of Overhead Transmission of Electricity’ issue celebrated the successful completion of a key project during China’s first Five-Year Plan. Months later, she collaborated with colleagues Sun Chuanzhe and Dong Chunqi developing eighteen iconic designs for the 1 October 1955 issue commemorating the mid-way point the same five-year plan. 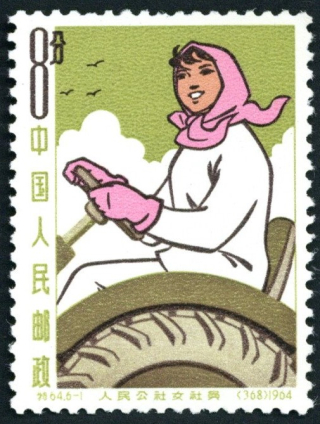 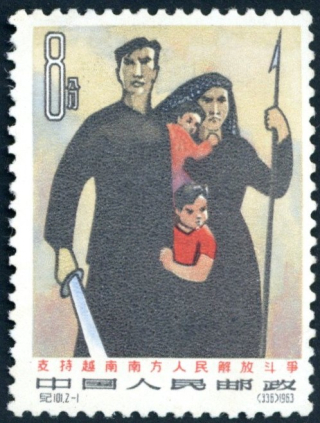 Several of her designs also focused on the social impact arising from the development of the ‘People’s Communes.’ This work promoted the significant role Chinese women played in Socialist construction, such as the 8 March 1964 ‘Women of the People’s Commune’ issue. International relations are another recurring theme a notable example including the 20 December 1963 ‘Support South Vietnamese People’s Struggle for Liberation’ issue. The first design based upon a yet unidentified Vietnamese Propaganda Poster reveals the intertextual nature of stamp design. 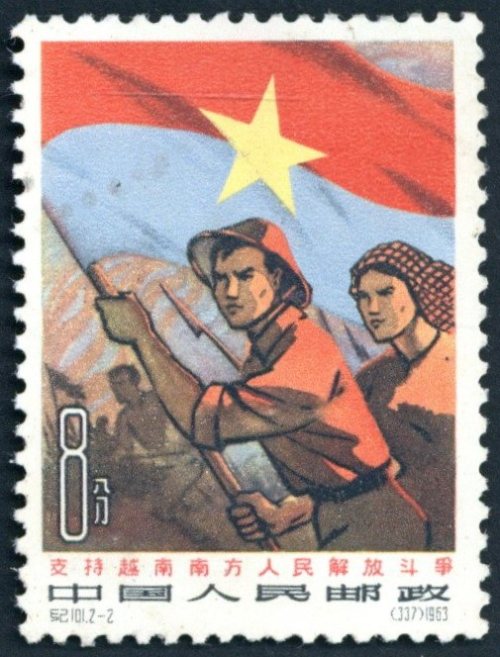 Another of Lu's designs supporting the South Vietnamese struggle.

Her designs also did much to promote the diversity of China’s historic and contemporary cultural heritage globally, her six designs for the 10 June 1975 ‘Wushu’ issue promoting Chinese martial arts when they were becoming popular worldwide. 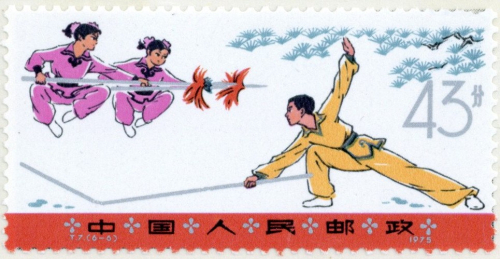 Sticking to the theme of culture, her designs for the two separate stamp issues commemorating China’s ancient numismatic history in 1981 and 1982 received international acclaim and several awards. Her final commission prior to retirement was the 11 December 2001 ‘China’s Membership of the World Trade Organization’ issue marking the watershed event which initiated China’s current economic, political, and military pre-eminence. 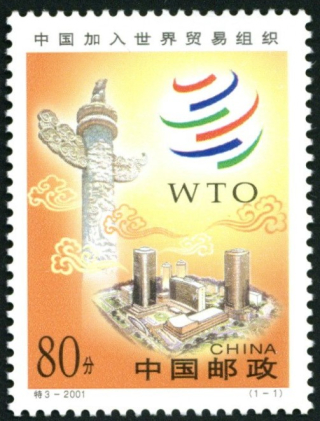 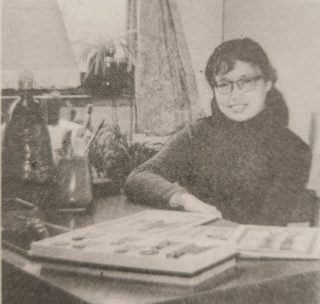 (Right) Lu Tianjiao at her desk.

Lu Tianjiao excelled in rising to the pressures and challenges placed on stamp design occasioned from national advances within the security printing industry, her designs seamlessly transitioning between intaglio, lithographic and photogravure printing processes. Nevertheless, the examples just discussed are merely a fraction of her total output. She produced or collaborated in the development of seventy separate stamp issues, totalling over two hundred and sixty separate stamps designs, comprising around one-eighth of China’s total stamp design output during her time of employment. Clearly prolific, was she significant? Her work is of fundamental importance for anybody interested in design, printing, and public messaging within the People’s Republic of China. Her career also spans core phases in the nation’s history as well as developments in design, security printing and print culture.