Sisters from the shadows - Lady Akikonomu

This occasional series of blog posts will highlight the work of Japanese women artists, whose achievements have often been overshadowed by their male contemporaries. The previous post looked at the artist Katsushika Ōi, daughter of the celebrated Katsushika Hokusai.  This time we will look at a fictional character who was also an accomplished artist.

Another female artist emerges from history in the form of a talented noblewoman in the Heian period literary classic the Tale of Genji. This story is often described as the oldest novel in the world. The author was Murasaki Shikibu (紫式部), a lady-in- waiting at the court of the Empress Shōshi (藤原彰子) in 11th-century Japan. The hero is Prince Genji and the main story line describes his life and relationships with various court ladies of the time.

Lady Akikonomu is not as widely known as other famous female characters in the Tale of Genji, such as her mother Lady Rokujō, but she is the only one who paints and draws illustrations in the story.

Lady Rokujō is well known throughout the story for her charisma and beauty, and her tragic love affair with Genji. Her loving devotion does not bring joy to her life, but she manages to keep her dignity supported by her sophisticated intelligence and the outstanding beauty of her calligraphy. 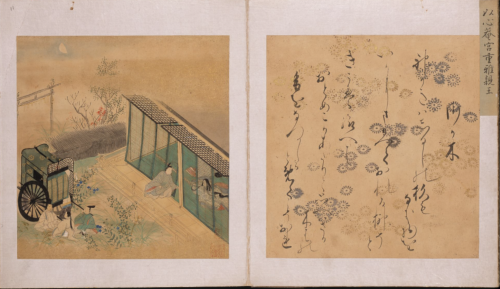 Fig. 1. Genji bids an emotional farewell to Lady Rokujō at Nonomiya shrine, as she prepares to set off to Ise with her daughter who has been appointed Grand Custodian of the Great Shrine. Chapter 10 of 'The Tale of the Genji' (Genji monogatari ekotoba源氏物語繪詞,), Manuscript, ca. 1665. British Library, Or.1287, f.11

Her daughter, Lady Akikonomu is a noble but does not have a strong enough supporter to elevate her position in Heian court society when she loses her mother and becomes an orphan. At the Heian court, writing beautifully is a must-have skill. She writes gracefully but lacks the elegance of her mother who  never had any equals in calligraphy. So how does she eventually become the Empress Akikonomu? The secret to her success lies in her own special talent for drawing.

Genji, who is a distant relative of Akikonomu, takes her under his wing and arranges for her to marry the boy-emperor Reisei. This is partially Genji’s atonement for his sin of destroying Lady Rokujo’s love for him. At the same time Genji expects Akikonomu to protect the boy emperor, who is nine years younger than her, while he still has much to learn before becoming an adult and fulfilling his duty as emperor. In the end, she is educated by her outstandingly intellectual mother, with a superb noble bloodline; in this way she becomes an ideal governess figure to him. 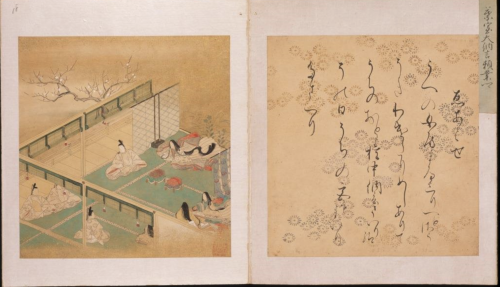 Fig. 2. A scene at the Imperial Court where an intellectual contest was held to compare illustrated stories. Chapter 17 of 'The Tale of the Genji' (Genji monogatari ekotoba源氏物語繪詞), Manuscript, ca. 1665. British Library, Or.1287, f.18

It must have caused Genji some surprise when she caught the attention of this boy-emperor by her skills in drawing. The boy happens to be keen on drawing and he discovers that Akikonomu is so elegant when she produces her illustrations. Initially, he is attracted by her talent and intellectually stimulating conversation. As he spends time with her drawing, he discovers her gentle nature and her beauty. Gradually, a fondness between them matures and eventually he makes her his empress.

Akikonomu successfully reveals her own identity to overcome the disadvantage of being a daughter of a legendary mother and Genji’s expectations to be an ideal figure to guide a young boy’s upbringing. She is a woman with own talent and grace, enhanced by her creative drawing and painting skills.

In these two blogs, we have looked at two women who were very different; one was a commoner who lived in the city of Edo who refused to meet expectations of a woman’s role, the other was a fictional Kyōto court lady who personified female elegance. The similarity is that both were daughters of highly charismatic people and probably they would never have questioned that the fame of their family members forced them to stay in the shadows. Nevertheless, they managed to move into the light by their own artistic talents and gained a place where they could shine as individuals, no longer just daughters of someone famous.