The art of small things (4): Juz’ markers in Qur’an manuscripts from Southeast Asia

The Qur’an is traditionally divided into thirty parts of equal length called juz', which are of great practical significance as they facilitate the planned reading or recitation of the Holy Book in its entirety over one month, particularly the blessed fasting month of Ramadan. Each juz’ can further be subdivided into half (nisf or hizb), quarters (rubu‘) and eighths (thumn). The start of a new juz,’ and often the subdivisions too, may be indicated in a Qur’an manuscript through a number of graphic devices. These range from a marginal inscription or ornament to a marker within the text itself, or by highlighting the first few words of the new juz’ in red ink or in bold; sometimes all these devices might be found together in a single manuscript. Preferred ways of signifying the start of a new juz’ often vary regionally, and will be illustrated in this post by Qur’an manuscripts from different traditions in Southeast Asia held in the British Library, starting with a Qur’an from Patani. 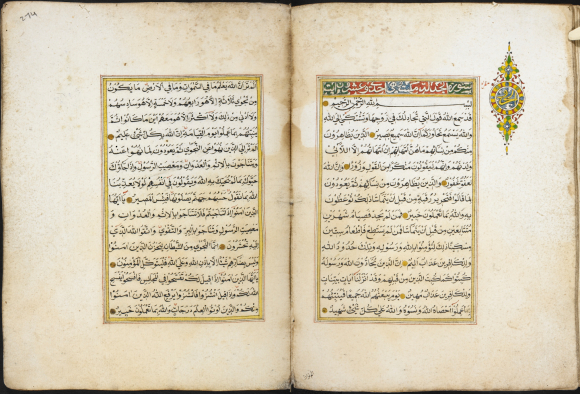 Marginal ornament signifying the start of the 28th juz’, at the start of Surat al-Mujadilah, in a Qur’an manuscript from Patani, 19th century. British Library, Or 15227, ff. 273v-274r

The East Coast of the Malay peninsula is home to two distinct styles of manuscript illumination, one centred in Terengganu and the other further to the north in Patani, but all Qur’an manuscripts from this region adhere faithfully to the same principles of text layout. This follows an Ottoman model known as ayat ber-kenar, whereby each juz’ occupies exactly ten folios of paper and hence twenty pages, and each page ends with a complete verse. As well as streamlining the copying process, this uniform layout also aids the memorization of the complete Qur’an, as each verse occupies the same position on the page in any manuscript consulted. Thus a new juz’ always commences at the top of a right-hand page, and is signalled by a beautiful marginal ornament, as shown above. In this manuscript all the juz’ markers are constructed according to the same basic design of two concentric circles inscribed in the middle al-juz’, but each is slightly different in coloration and in the detail of the delicate floral and foliate ornaments extending upwards and downwards.

Marginal ornaments signifying the start of (left) juz’ 10 and (right) juz’ 11, in a Qur’an manuscript from Patani, 19th century. The small inscription in red ink, maqra’, indicates a section for recitation. British Library, Or 15227, ff. 93v and 103v

The Ottoman system of page layout is occasionally also encountered in Qur’an manuscripts from Java, but in general there are no set prescriptions for fitting a juz’ into a precise number of pages. In two Javanese Qur’ans in the British Library we see a quintessentially and uniquely Javanese method of signifying the start of a new juz’, by the placement of two marginal ornaments – very often semicircular in shape – at the midpoints of the outer vertical borders of the double-page spread, while the exact point in the text is marked with a composite roundel in red ink. 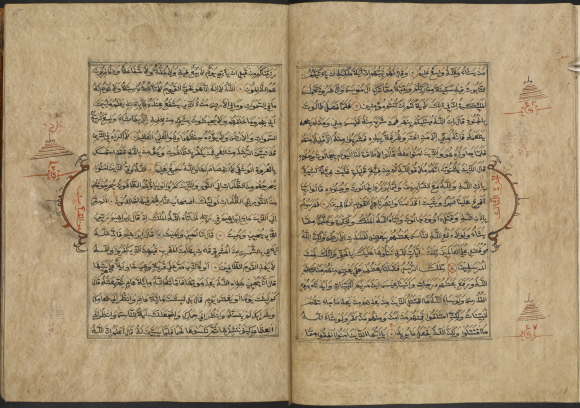 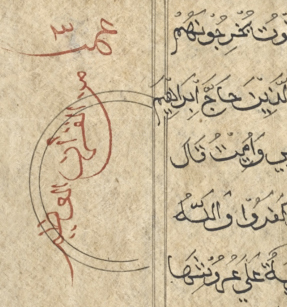 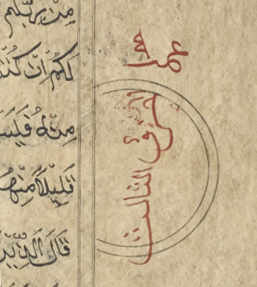 In two other Qur’ans from Java, the start of a new juz’ is just marked with a calligraphic inscription in red ink in the margin, and an starburst roundel in red ink at the appropriate point in the text, as seen below in a manuscript from Madura, off the northeast coast of Java. 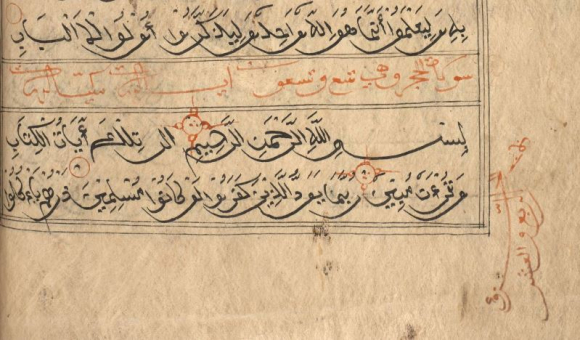 In Qur’an manuscripts from Aceh, on the northern tip of the island of Sumatra, there was no pre-ordained system for copying the Qur’an. The number of pages required for each juz’ therefore depended on the style of writing of each scribe, while a conventional set of graphic symbols signified the exact starting point of a juz’ within a page of text. In the most elaborate manuscripts – such as the fine Qur’an Or 16915 shown below – the precise point of the start of the 14th juz’ is marked with a composite roundel made up of six intersecting circles; the first line of the juz’ is written in red ink and set within ruled frames; and a magnificent ornament in the adjacent margin serves to draw the eye to the page. 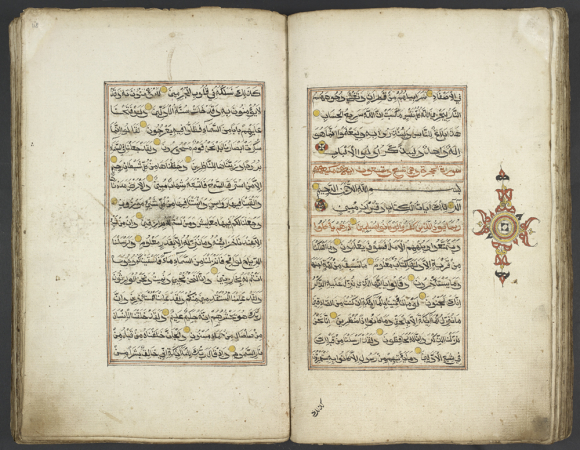 Or 16915 is exceptionally rich artistically in not only signifying the start of each juz’ with illuminated marginal ornaments, but also indicating each eighth part through coloured roundels in the text accompanied by smaller marginal medallions. All are composed of a series of concentric circles often embellished with a variety of rays, petals, and vegetal ornaments added on four-fold or eight-fold principles, in the same palette of red, yellow, black and reserved white, but every single ornament is different, reflecting the artist’s delight in creating countless variations on a limited theme. Shown below (not to scale) is the complete set of marginal ornaments for the constituent parts of juz’ 10. 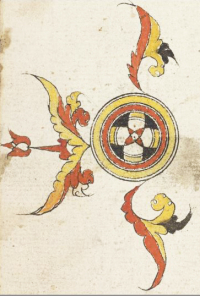 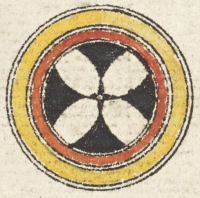 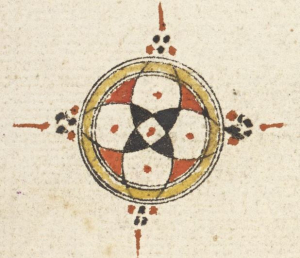 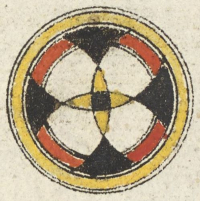 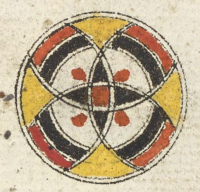 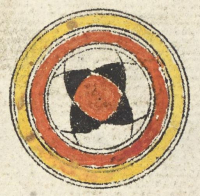 Despite such an abundant display of artistic virtuosity in this manuscript, it is hardly surprising that the artist’s creativty and stamina began to flag towards the end of the volume. Preparatory sketches are still in place for all the marginal ornaments, but many of the later ones have not been worked up and remain skeletal ink diagrams. 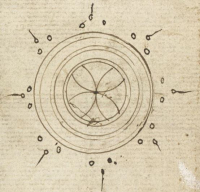 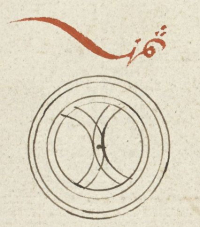 There are two other Qur’an manuscripts from Aceh held in the British Library. Both of these highlight the first words of a new juz’ in red ink, and one also marks the precise point in the text with a composite illuminated roundel, but neither were created with marginal ornaments. However, Or 16034 bears testimony to additions by subsequent hands to highlight each new juz', with occasional inscriptions and pencilled ornaments added in the margins.

The start of juz’ 4 in a Qur’an manuscript from Aceh, indicated in the text by writing the first line in red ink, with later additions in the margin of the pencilled inscription al-juz’, a cross-shaped ornament, and the number ‘4’ in black ink. British Library, Or 16034, f. 20v

As noted above, the standard division of the Qur’an is into thirty parts or juz’, but other principles of dividing the text are also known, for example into three, seven or ten parts. A division based on word-count identifies the word walyatalattaf, ‘let him be courteous’, in Surat al-Kahf (Q.18:19), as the precise mid-point in the Qur’an, and the significance of this word is often recognized in Qur’an manuscripts from the Malay world. Of the eight Southeast Asian Qur’ans in the British Library, three – two from Aceh and one from Java – highlight the word walyatalattaf either by rubricating in red ink or by elongating it and writing it in bold.

Over the course of this study of minor decorative elements found in Qur’an manuscripts from Southeast Asia, very often it was the less polished manuscripts, with scribal errors or omissions or unfinished sections, which were the most helpful in reconstructing the process of copying and decorating Qur’an manuscripts, which seems to have progressed in the same order across the Malay archipelago. First the scribe would write out the entire Qur’anic text in black ink, using red ink for the the first words of a juz’ as necessary, and indicating the ends of verses with small marks. Then, verse markers – usually in the form of red or black ink circles – were added, and coloured in if necessary. The text was then checked for accuracy and to make good any omissions. Only after this stage were frames added to each page of text, composed in accordance with regional preferences. Titles of chapters or surahs were then added in red ink, and ruled frames placed around the surah headings. After this, marginal ornaments would be added to indicate the juz’ and other textual divisions.

This article on Juz’ markers is the fourth installment of a five-part series of blog posts on ‘The art of small things’ in Qur’an manuscripts from Southeast Asia in the British Library. The first post is on Verse markers, the second on Text frames, the third on Surah headings, the fifth and final part is on ruku' and maqra' Recitation indicators.

Posted by Annabel Gallop at 1:13 AM