A Tale of Two Enigmas: A Magtymguly Pyragy Manuscript in the British Library Collections 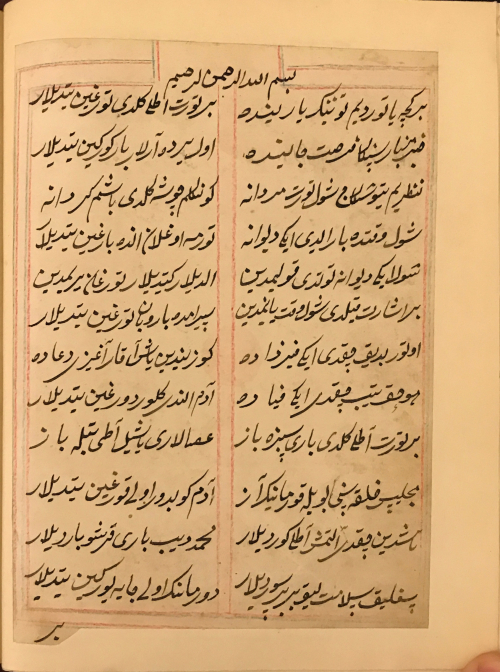 Of all the languages of state included within my curatorial bailiwick, Turkmen is undoubtedly the most neglected. It doesn’t help that the name is often applied to two divergent linguistic communities. For those interested in historical uses of the word, it often refers to Turkic or Turkophone communities between the Balkans and Central Asia practicing nomadic or semi-nomadic socio-economic organization. In this usage, it can sometimes be replaced by Turcoman or Turkoman, although the rule is far from hard and fast. Various dynasties that established polities in Anatolia, the Caucasus, and Iran are often described as Turkmen; think of the Aqqoyunlular, the Seljuks, and even the Qajars, to name a few. Today, the designation is still used by and for communities in some West Asian states. Many of these peoples still practice nomadic or semi-nomadic social and economic organization. In Turkey, a geographical determinant is often used to distinguish them from historic or Central Asian communities, especially with respect to those in Iraq. For those members of these groups resident in the Republic, other endonyms are now used for some communities previously referred to as Turkmen, such as the Yörük.

There is, of course, another use of the word Turkmen, applied to a Central Asian people linked by language, culture, and history to the Turkmen of West Asia and the Balkans. Independent since 1991, Turkmenistan is at the centre of a linguistic community numbering some 11 million from northern Iran to Uzbekistan and from Afghanistan to Russia. This Turkmen language, also a member of the Oghuz branch of the Turkic family, was standardized in the 1920s and 30s by Soviet specialists, and was made the official language of the Turkmen Soviet Socialist Republic in 1924. Currently written in the Latin alphabet, the language boasts a well-documented, if understudied, literary corpus that extends back several centuries. This tradition is best exemplified by an 18th-century poet named Magtymguly Pyragy. He is the Turkmen equivalent of Alisher Navoiy or Shakespeare, both for the influence of his poetry on later Turkmen creatives, and for his position in state-driven literary historiography. While published and translated editions of Pyragy’s poetry are relatively common in Euro-Atlantic libraries (thanks, in part, to Turkmen state institutions’ drives to promote him), manuscripts are rare. We at the British Library, however, are exceedingly lucky to hold such a copy under the shelfmark Or 11414. And I was fortunate enough to have had it brought to my attention by Dr. Anton Ikhsanov, who completed his doctorate on Turkmen intellectual history at St. Petersburg State University. 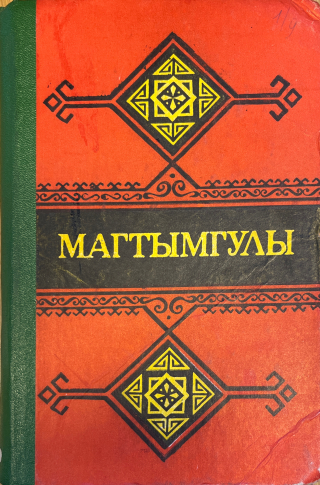 Magtymguly Pyragy was born around 1730 CE in Haji Qushan, Golestan province, contemporary Iran. He passed away in 1807 CE close to the current Iranian-Turkmenistani border, and was laid to rest in Aq Taqe-yi Qadim, Golestan Province, Iran. He received his education in Turkmen, Persian and Arabic at home and in the great centres of learning in the region, including Khiva and Bukhara, before traveling widely in Central Asia, the Caucasus, Iran, and West Asia. Pyragy’s peripatetic life and widespread impact exemplify the reach and diversity of Turkmen culture, and of the fluidity of boundaries among Oghuz-speaking peoples prior to the 20th century. It’s clear that this poet’s work was influential among speakers at the eastern fringe of the Oghuz linguistic space and beyond. But during the Soviet period, Magtymghuly Pyragy was elevated, along with a number of other pre-Revolutionary Turkic literati (including Navoiy, Abai, and Mirzǝ Fǝthǝli Axundzadǝ) to the rank of proto-Socialist visionaries. Their works were woven into the dominant (and state-sanctioned) socialist realist criticism, and libraries were written on the presence of anachronistic Marxist-Leninist dogma within their works. 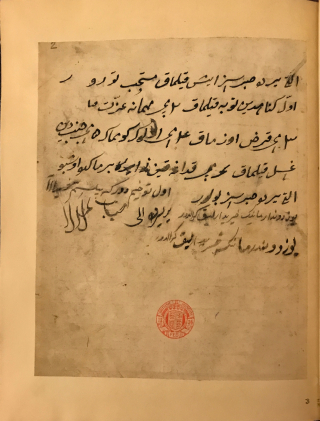 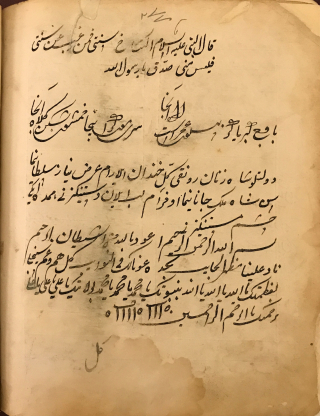 (Left) An incomplete (?) poem or prose text, possibly on prayer or repentance, preceding the main Divan.

(Right) A series of religious invocations in Arabic in nestalik script.

In a way, this later trend is what makes Or 11414 so special. The manuscript is a relatively bare and simple one, with red pencil text boxes for some of the pages. The majority of the text is written in nestalik in black ink with a relatively thick-nibbed pen. It is arranged into two columns, and there are occasional dividers in red reading “va li-hi ayzan (وله أيضاً)”. At the start and end of the work, we notice texts written in a different hand and using a different pen. The first of these, on f 2r, is an odd addition that is difficult to read because of both smearing of the ink and the irregular handwriting. I’m unsure whether this is intended as another poem, or if this an account of an individual’s attempt at prayer and repentance. On f 140v, in contrast, there are religious invocations in beautifully ornate and elaborate nestalik, all of them in Arabic. In between these two poles, we find mostly the work of Magtymguly Pyragy, but also poems by other Turkmen poets, including Döwletýar Beg, Seýitnazar Seýdi, Gurbandurdy Zelili, Bende Murad, and Abdulnazar Şahbende. 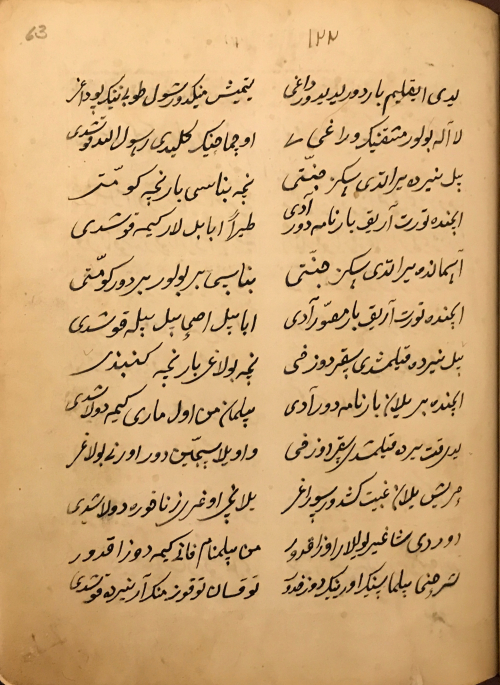 What makes this so important? We’re used to seeing manuscripts lauded and promoted because of their ornate illumination and illustrations. Sometimes, they’re publicized because of the high monetary value attributed to them through the commoditization of authors’ legacies and calligraphers’ pedigrees. But Or 11414’s worth lies in the fact that it most likely reflects the copying and circulation of Turkmen texts for the enjoyment and edification of as wide an audience as possible. It provides us with a rare view into the reading, writing, and copying cultures of Turkmen-speakers in the late 18th or early 19th centuries. And, more importantly, it creates a window onto their usage of the language and their estimation of Pyragy and his work before the heavy-handed intervention of Soviet authorities in the 1920s and 30s. The manuscript creates a counterpoint for the study and hypothesizing of a language and literary tradition that are both frequently overlooked by individuals and institutions outside of Central Asia.

There is, of course, another part to this story, one about provenance. How did this rare work make it into the British Library’s collections? A note in the back of the manuscript states that it was purchased from M. E. Denissoff on 10 February 1934. This likely refers to Elie Denissoff or Ilya Denisov, a Russian émigré who was the Secretary of the Russian Prime Minister in 1917. Denisov fled the Soviet Union to Paris and then Belgium, where he eventually engaged in scholarship on ecclesiastical history. Such biographical details would fit those of individuals who often sold manuscript material to the British Museum and similar institutions at the time. But it doesn’t explain how the volume came into Denisov’s possession in the first place. Thanks to Dr. Hugh Olmsted and his enlightening “Two Exiles: The Roots and Fortunes of Elie Denissoff, Rediscoverer of Mikhail Trivolis,” we have at least a glimpse into the possible origin of the manuscript.

Denisov was from an old Cossack family that had first come into the Imperial household’s good graces through its contributions to the Siege of Azov. When the October Revolution resulted in the downfall of the Romanov dynasty and the Imperial system, Ilia escaped from St. Petersburg south to his family’s ancestral lands near Kuban. This provided only temporary respite, but it did ensure that he did not suffer the same fate as the rest of his family in St. Petersburg, who succumbed to war and persecution. He gradually made his way out of Russia via Baku into Persia. From Tehran, he requested temporary permission to re-enter Russian territory, and did so on the eastern shore of the Caspian, making his way to Ashgabat before crossing by sea again to Baku, and thence out to Istanbul, Bulgaria, and eventually France. Given this brief sketch, it is entirely possible that Denisov acquired the Divan-I Makhtumquli in Turkmenistan proper, and that the manuscript originated from Central Asia. What’s more, from a description of Denisov’s memoirs in Olmsted’s work, we know that the former visited the British Museum in the mid-1930s as part of his doctoral research on Maximus the Greek. The pieces of the puzzle are beginning to fall into place, but only at the terminal end of the manuscript’s provenance. 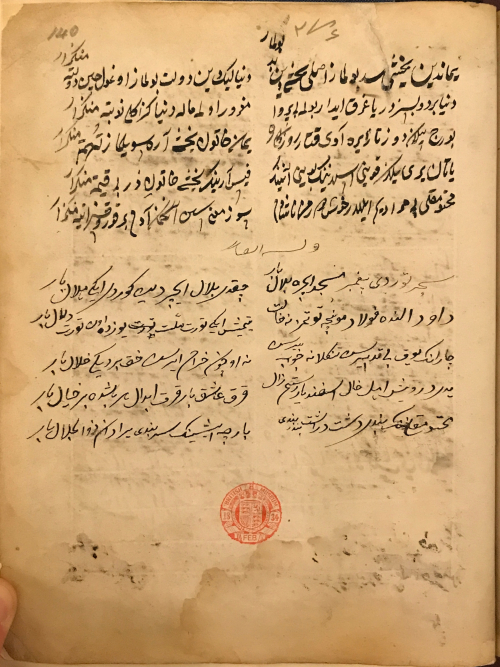 There is one last clue that is proving to be far more difficult to decipher. In addition to the note about Denissoff at the end of the manuscript, an annotation reads “Tina Negan”chik” (Тина Неганъчикъ)”. It’s not clear to me whether this is intended to be a name, and, if so, what role this person might have played in the item’s history. The use of the hard sign at the end of the word might point to a pre-Revolutionary orthography, or perhaps to nasalized and glottalized consonants, as in common in the current orthography of Crimean Tatar. Whatever the case, the all-powerful tool of Google searching has produced nothing of note, and it does appear that we might yet have to wait a bit longer before we’re able to know to what this refers.

Sometimes, big gifts come in small boxes. While Or 11414 doesn’t look like the type of manuscript that would leave us plenty of avenues for further study, that’s exactly what it has done. And at a time when increasing demands are made for the massaging and manipulation of cultural heritage to satisfy the demands of the social media machine, it bears remembering that there is value beyond being the perfect Instagram post. It just takes a bit of time and quietude to find it.

Ikhsanov, A. (2020), 'A Community of Linguists Does Not Create a Language, but a Society Does: Dichotomies in Central Asian History,' Bulletin of the International Institute for Central Asian Studies, 29, 124-136.