The history of Khmer manuscripts is closely connected with the influence of Indian civilisation in Southeast Asia and particularly with the introduction of Hinduism and Buddhism in the region. The earliest book format in the Khmer Empire – similar to that in South Asia – was the palm leaf bundle, sleuk rith. Although the oldest surviving examples of Khmer palm leaf manuscripts date back only to the late 17th century , there is evidence that they were in use in mainland Southeast Asia much earlier. The Khin Ba gold manuscript found at Sri Ksetra (kept at the National Museum, Yangon), crafted in the shape of palm leaves with holes, indicates that such manuscripts have been present in the region at least since the 5th century CE. The donation of Mahabharata, Ramayana and Purana manuscripts to a Hindu temple is documented in a pre-Angkorian stone inscription (Veal Kantel K.359) dating back to the early 7th century, and a 9th-century inscription (Prei Prasat K.279) by King Yasovarman prescribes the provision of blank palm leaves, lampblack and earth powder - for sanding down the leaves - to students. A statue in Khmer style of the 11th-12th century (kept at the National Museum, Bangkok) shows Bodhisattva Avalokiteshvara holding in his four hands a conch, mala beads, a lotus bud and a palm leaf book, whereas a 12th-century bas-relief at Angkor Wat depicts an apsara holding such a manuscript.

In addition to the palm leaf manuscripts there are folding books (kraing), which were traditionally crafted with paper (snay) made from the bark of the Streblus Asper, a tree in the Mulberry family. The paper can be in a natural cream colour with text written in black ink, or it can be blackened and text written either with white chalk, a yellow gamboge ink or gold ink. Two main styles of Khmer script are found in manuscripts: aksar chrieng (slanted script) and aksar mul (round script). 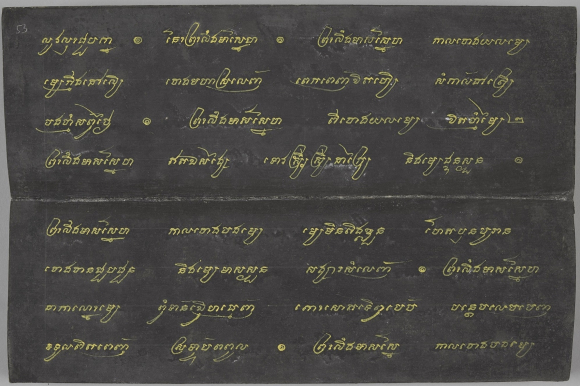 Despite decades of combined efforts by Cambodian and French scholars to preserve Cambodia’s manuscripts, the majority have disappeared: an estimated 80% were lost to war and destruction by the Khmer Rouge, looting, neglect due to post-war poverty and, more recently, mutilation to make souvenirs sold at tourist markets.

However, large numbers of manuscripts containing Pali or bi-lingual Buddhist texts in Khmer script have been preserved in Thailand. The country has strong ties with Khmer cultural heritage due to the fact that much of today’s Thailand geographically was once part of the former Khmer Empire. Hinduism and largely also Buddhism were introduced to the early Thai kingdoms Sukhothai and Ayutthaya via the Khmer Empire, and Thai rulers drew inspiration from the Khmer in the process of establishing their own distinctive script, literature, art, architecture, law and administration. For centuries, until the introduction of printing in the 19th century, it was common practice to copy manuscripts as a way of preserving Buddhist and Hindu sacred texts, and often such copies – including entire editions of the Pali Tipitaka – were sponsored by members of the royal family. Towards the end of the 18th century the Khmer script was adapted to accommodate Thai vowels and tonality in order to write texts in Thai language in Khmer script (called akson Khom in Thai). The copying of Khmer manuscripts reached a climax when George Cœdès was assigned to the Royal Vajirañāna Library in Bangkok (1916-18) and ordered copies of rare Khmer manuscripts and texts that were not known outside Cambodia.

The majority of manuscripts with text in Khmer script at the British Library originate from Central Thailand and contain bi-lingual Buddhist texts, yantra designs, medical treatises and glossaries. However, a small number of over a dozen manuscripts are almost certainly from Cambodia with text either in Pali or Khmer language. These include palm leaves as well as paper folding books.

A collection of Khmer literary texts in eleven volumes is a fine example of multi-volume kraing (folding books), made from cream-coloured mulberry bark paper (Or 16131/1-11). The text was written with black ink, and each volume has a red stamp either on the front or back cover (image below). Although none of the volumes contain a date, they are thought to be copies made between 1890 and 1925 from older manuscripts. In volume 3 the name of a temple, Vat Pudumm Vadhatiy, is mentioned. The volumes contain chapters from verse novels like “Hans yant” (vol. 1), “Tav rioen" (vols. 2-5, 8-10) perhaps composed by Ukna Cakri Kèv and Bana Ratn Kosa Kèv in 1837, “Cau Om”, a didactic text in verse consisting of admonitions from a father to his son on the art of political life and “Dambèk puon nak”, a tale in verse on the stupidity of four bald men (both vol. 6), "Laksanavans" (vol. 7), “Varanetta” (vol. 11). Some volumes also contain notes in Thai language, in a different hand, which may have been added later. A charming, small kraing manuscript made from blackened mulberry bark paper (below) was acquired when former curator Henry Ginsburg’s collection of books and manuscripts was given to the Library following his sudden death in 2007. The text in Khmer language is written in gold ink, in Khmer chrieng script, but because the manuscript is incomplete it was not possible to identify the text for a long time.

Dr Trent Walker, from Stanford University, was able to establish that the text is a letter addressed to royalty, consisting of a set of prophesies for the future and admonitions to be followed. It references other prophetic (damnay) texts, including Ind damnay. The estimated period of its creation is between 1850 to 1925. 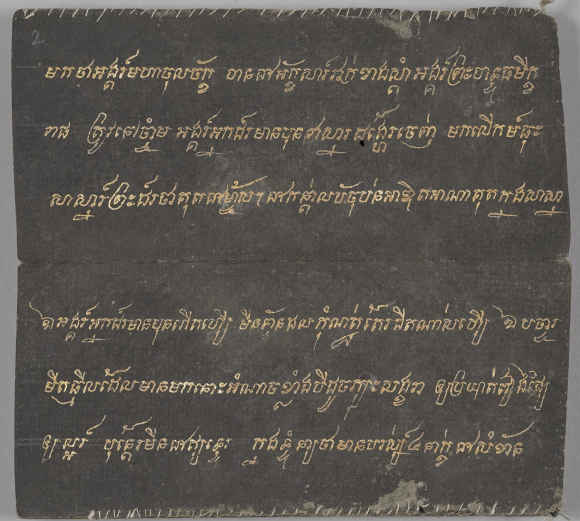 Traditional Khmer manuscripts like the examples presented in this blog post have been used as vehicles of knowledge for centuries and give us insights into the religious, literary and cultural traditions of the Khmer civilisation. The upcoming second part will look at some manuscripts containing Khmer texts that were created outside Cambodia.