Transcribed from the boundary wall of the universe: Early Dhammasattha manuscripts in the Burmese collection of the British Library

The British Library’s Burmese collection holds some of the earliest extant dhammasattha manuscripts in the world. The dhammasattha, or “treatise on the law” is a genre of Buddhist literature prevalent in mainland Southeast Asia, written in Pali and in a range of vernacular languages including Burmese, Arakanese, Mon, Shan, Thai, Lao and Khmer. Although it is an integral part of the Theravada tradition, it is also historically related to Brahmanical dharmaśāstra texts written in Sanskrit.

The dhammasattha was the primary legal framework for society, and originally applied to every Buddhist, both secular and monastic. It dealt with all aspects of the law, covering property and land, debt, wages, inheritance, slavery, marriage (including rape and adultery), assault, murder, theft, slander and the breaking of oaths. The most extensive tradition of dhammasattha comes from Myanmar, where some laws derived from the genre are still in force in the legal system today. Knowledge of dhammasattha was part of the education of rulers and administrators, monks, as well as any “good men”, and could be put to practice by any of these (therefore being mainly a male activity). The exclusive profession of a judge came into being only during the colonial period.

This blog draws extensively on Christian Lammerts’ recent authoritative publication Buddhist Law in Burma: A History of Dhammasattha Texts and Jurisprudence, 1250–1850 (2018), as well as his article 'The Murray Manuscripts and Buddhist Dhammasattha Literature Transmitted in Chittagong and Arakan' (2015), in which he discusses at length the dhammasattha manuscripts found at the British Library.

The Origin of Law 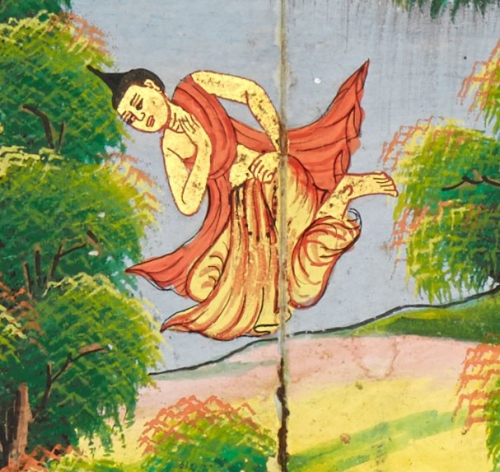 A flying rishi. Manu was one of the first rishis or men who had accomplished super-knowledge and super-powers, such as the capacity to fly. Scenes from Jataka stories, 19th century. British Library, Or 4542 B, f. 1r

The story of how the dhammasattha text came into being has many versions. According to one standard narrative, it already existed at the beginning of the world. The very first king, Mahāsammata, had a renowned minister of great learning named Manu, whom he appointed to adjudicate disputes. Manu, however, soon found that it was difficult to rely only on witness testimony in passing judgment, and since he was fully accomplished in super-knowledge (abhiññā) and magical powers (iddhi), he used these to fly through the sky to the boundary wall of the universe. There the dhammasattha was written on the wall in Pali with letters each as big as a cow. Manu then proceeded to transcribe the law from the wall and presented the dhammasattha text to Mahāsammata.

The dhammasattha was therefore originally conceived of as cosmically derived, neither human nor divine. It had no author, but was intimately tied to writing. Although it was a natural part of the cosmos it was only accessible to those with magical power. It was also stated that the dhammasattha was so vast it could not be mastered by the average man. This is why, the tradition reports, scholars and wise men abridged it, sometimes translating it into vernacular languages. Although the dhammasattha had many textual variations its essential cosmic justification stayed the same until the 18th century when Burmese jurists began to question this theory of the origin of law.

Textual references to dhammasattha begin to be found in 13th century Burmese inscriptions (although dhammasattha texts were likely in circulation earlier).  The Dhammavilāsa dhammasat (ဓမ္မသတ်, Burmese for dhammasattha) is understood to be the oldest known dhammasattha composition. Out of seven existing manuscript copies three are located at the British Library (Add MS 12248, Add MS 12249, Or 11775). Of these, Add MS 12249 is particularly significant, as it provides the only secure date for the composition of the text. Although the manuscript is dated 1825 the scribal colophon states that the text was copied from an old manuscript dated to 1637/38.

The oldest physical copy of the Dhammavilāsa dhammasat is from 1758 and is located at the Universities’ Central Library in Yangon. One of the British Library copies (Or 11775), however, is dated only 11 years later, to 1769.

The Dhammavilāsa dhammasat was widely transmitted and produced many significantly different versions, both in prose and verse, not only in Burmese, but also in Arakanese, Mon and Shan.

The last folio of a rare Arakanese dhammasattha manuscript with a colophon dating it to 1749. British Library, Murray Collection, Add MS 12254, f. 73r.

The British Library holds a rare early Arakanese dhammasat manuscript (Add MS 12254) from 1749, which has been fully digitised. Although related to the Dhammavilāsa dhammasat this version represents a distinct Arakanese dhammasattha tradition, prevalent in the area of Sittwe and Chittagong in 18th-19th centuries. This is the oldest extant Arakanese version and the westernmost of all dhammasatthas; it is also nine years older than the oldest extant Burmese version of the Dhammavilāsa dhammasat.

The text is written with black ink on individual strips of yellow paper (instead of palm leaf). The Murray Collection, of which it is a part, contains the oldest Arakanese paper manuscripts in the world (dated between 1721-1784).

The text is written in “mra mā”, which before the end of the 18th century designated both Arakanese and Burmese languages (that are closely related). Its scribal colophon identifies it as the work of “the excellent teacher and monk Rāmi Shyaṅ.” In Arakan personal names were used instead of monastic titles, which is still tradition in Chittagong today.

The Manusāra dhammasat was also an early tradition with the composition of the text attributed to 1651-52. It was written by Tipiṭakālaṅkāra (a monk and Vinaya scholar) and Kaingza Manurāja (a lay judge), and for the first time links the dhammasattha geographically to Myanmar and chronologically to Burmese and Mon kings. The origin story is slightly transformed, with a seer named “Manusāra” responsible for transcribing the dhammasattha from the boundary wall of the universe. Manusāra was written in Pali verse, for the benefit of durability and easier memorisation, but also included an elaborate nissaya or commentary in Burmese. Manusāra is noteworthy for the many reformulations of the dhammasattha tradition it introduced, including a more explicit separation of lay and monastic jurisdictional boundaries. 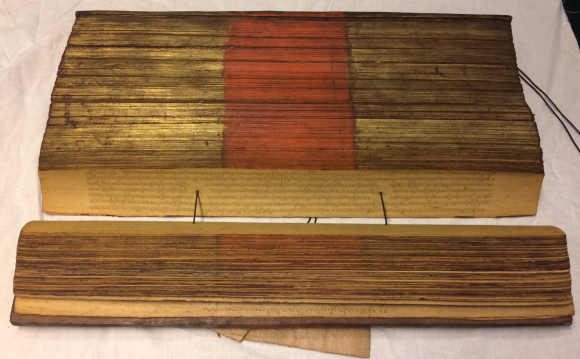 The Many kyay dhammasat was an abridged compendium of pre-existing versions. British Library, Mss Man/Bur 3429.

The Manu kyay was a much later abridgement and differed considerably from the aforementioned treatises. It was an anonymous compendium of laws derived from the dhammasattha tradition and compiled sometime prior to 1782. The British Library holds the second oldest extant Manu kyay manuscript (Man/Bur 3429), dated to 1789. The Many kyay was translated in English by Richardson already in 1847, and henceforth made this version well known. 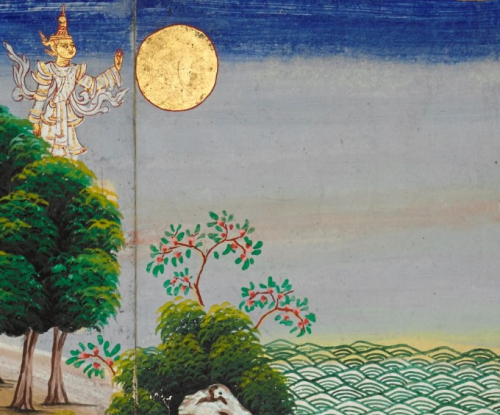 The Dhammasattha was likened to the illuminating rays of the moon. British Library, Or 4542 B, f. 63r.

The dhammasattha advocated for universal justice and applied to all Buddhist beings, human and celestial. It was meant to be “impartial, like a pair of scales”.

Lammerts has noted that interestingly the Arakanese versions of the dhammasattha are much more tolerant than their Burmese counterparts by allowing the testimony of both Buddhists and non-Buddhists alike (“those who take refuge [in the three jewels] and those who do not,” Lammerts 2015, 431), as well as local residents and foreigners (“people from places far away,” Lammerts 2015, 431), and of good and bad people regardless of their character and the scale of the dispute. The Burmese dhammasatthas, by contrast, specifically discriminate against non-Buddhists as untrustworthy witnesses.

Being eaten by a tiger was one of the eight punishments for judges adjudicating incorrectly. British Library, Or 4542 B, f. 131r

Punishment for faulty judgement was extremely harsh from the very beginning, and was the reason why Manu was prompted to look for a cosmic explication of the law in the first place. Judges were expected to be truthful, avoid bias, refrain from bribes, and to examine the evidence comprehensively. They were particularly advised to avoid the four “bad courses” (agati): desire (favouring a relative, a friend or someone who has given presents), hatred (disfavouring an enemy or someone who doesn’t pay one respect), fear (letting someone go without consequences because they know someone in power, or because they threaten one’s property or oneself), and ignorance (inability to understand or discern the law). Should a judge adjudicate incorrectly or unjustly the “eight dangers” and “ten punishments” would befall him.

The eight dangers, which in this formulation are unique to Myanmar, are the following: 1) being swallowed by earth, 2) being struck by lightning, 3) being eaten by ogres, 4) being eaten by a tiger, 5) death by crocodile, 6) capsizing in a boat, 7) bleeding to death, 8) madness.

The ten punishments are paralleled in the Dhammapada: 1) violent, unhappy suffering, 2) loss of property, 3) destruction of the body, 4) severe, torturing disease, 5) loss of mind, 6) oppressive punishment from the ruler, 7) harsh accusations, 8) extermination of the family, 9) eradication of wealth, 10) houses burnt by lightning.

When such a person died they fell into the four unhappy destinies (hell realm, demon realm, ghost realm and animal realm) suffering greatly as ghosts. The texts describe such hell-ghosts in detail: “His body would grow enormous… His eyes were a cubit in diameter, his mouth the size of a needle. His body was red like the colour of blossoming flowers. His toenails and fingernails were as sharp as nails, and with them he incessantly gouged his flesh and cannibalised himself. He lost all strength from consuming himself, and was eventually carried away by the wind.” (Add MS 12248, Add MS 12249; trans. Lammerts 2018, 81).

If the law was adjudicated correctly it would bring great prosperity to the country and foster the ability of humans to perform acts of merit. According to certain dhammasatthas, the benefit of such merit would be divided into six parts, one of which went to the ruler. In contrast, should the law be adjudicated incorrectly the country would be unable to achieve prosperity and happiness. The demerit produced would similarly be divided into six parts, with the ruler and the judge each personally receiving one.

I would like to thank Christian Lammerts for his comments on this blog and for his expert opinion.