One of our most active contributors and colleague, J.P. Losty (1945-2021), passed away on the 29th of September. We are heartbroken by the news and will miss Jerry for his unfaltering generosity, sense of humour and his exceptional knowledge on the collections. Our thoughts are with his wife Kate and daughters Cat and Ellie.

Jerry started his career at the British Museum in 1971, joining as the Assistant Keeper of Sanskrit in the Department of Oriental Manuscripts. From 1986, Jerry worked in the Print, Drawings and Photographs section of The British Library; first as Curator and retiring as Head of Prints, Drawings and Photographs in 2005. His exhibition Art of the Book in India (1986) brought together an encyclopedic collection of South Asian manuscripts from across the world and the accompanying catalogue is still a valuable resource for researchers.

Jerry has left us an incredible legacy at the British Library, from shaping the collection with his ambitious programme of acquisitions over a 34-year career, arranging our internal storage of the paintings in such a detailed fashion (by style and then in chronological order), and also leaving copious details in the catalogue records and articles on the breadth of the collection. Since retirement, Jerry’s impressive range of publications – more than 26 books – has opened our eyes to fresh approaches to Indian painting. His ability to write accessible articles, whether for the British Library’s Asia and Africa Blog, or his countless monographs, really demonstrates his dedication to the field and ensures that his information is as helpful to the academic scholar as for a general audience.

As Jerry's extensive career can be better outlined by one of his many peers, this blog post looks at Jerry's contributions post-retirement. On retiring in May 2005, Jerry spent the initial months devoting time to his other interests such as music, travelling and spending time with his family. This respite was short lived as Jerry was invited back to the Library to guest curate The Ramayana: Love and Valour in India's Great Epic and wrote the accompanying publication which launched in 2008. 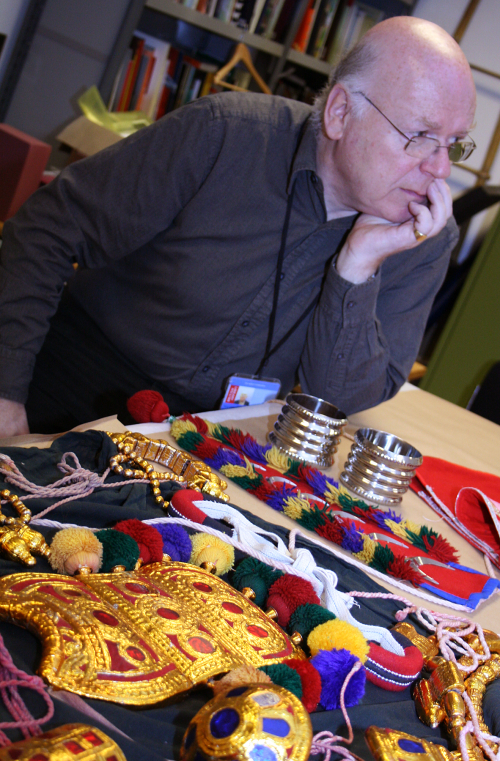 Jerry looking at decorative objects to be displayed at the Ramayana exhibition in 2008. Photo credit: Janet Benoy.

After wrapping up the Ramayana project, Jerry started to focus on his research on later Mughal paintings. From 2008 through 2012, Jerry was exceptionally busy working on a range of projects. He completed his research on Mazhar Ali Khan's Panorama of Delhi and published a monograph titled Delhi 360 (Roli Books, 2012). This detailed publication cross-checked the illustrated monuments with extant buildings that were drawn in 1846 by the artist Mazhar Ali Khan from the viewpoint of the Lahore Gate at the Red Fort. Jerry also supported my first major British Library exhibition, Mughal India: Art, Culture and Empire, giving me guidance on early Mughal manuscripts and graciously co-authored the book in a record 4 month window. Jerry also supported the South Asia section curators Marina Chellini and Leena Mitford with the ambitious Digital Re-unification of the Mewar Ramayana in 2014. In acknowledgement of his lifetime work on Indian art, Jerry was awarded the Colonel James Tod award at the Maharana of Mewar Annual Function in Udaipur in March 2016. 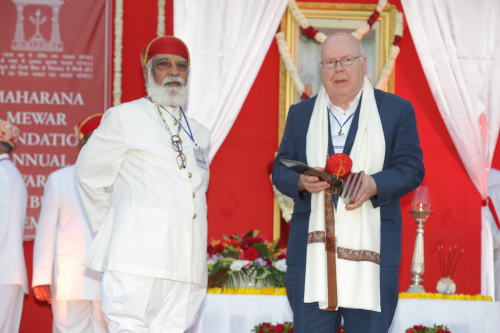 In terms of publications, between 2010-2021, Jerry was regularly invited to contribute to a range of exhibition catalogues including The Indian Portrait (National Portrait Gallery, 2010), Princes and Painters in Mughal Delhi (Yale University Press, 2012), Masters of Indian Painting (Artibus Asiae, 2015), and Forgotten Masters (Wallace Collection, 2019). Aside from his many articles, Jerry also published the following books:

For the followers and readers of the Asian and African Studies Blog, Jerry was one of our key supporters from the launch of the Blog in 2012. Jerry immediately joined in and offered to contribute short articles on parts of the collection that he had continued to research during his retirement. As a fitting tribute, here is a roll call of his contributions since 2012.

Jerry's full list of publications can be found via the British Library's Research Repository or Academia.edu.