The importance of the manuscripts of West Africa to scholarship, history, heritage and religion has long been recognised, and is of increasing interest to researchers and the public. Across the region, the manuscript collections of many libraries testify to long traditions of Islamic scholarship – not only in Mali, where the people of Timbuktu joined forces to rescue their manuscripts from Islamist occupiers in 2012–2013, but in many other countries, including Mauritania, Nigeria, Niger and Ghana. Numerous manuscript collections also exist in ajami – African languages written in Arabic script. 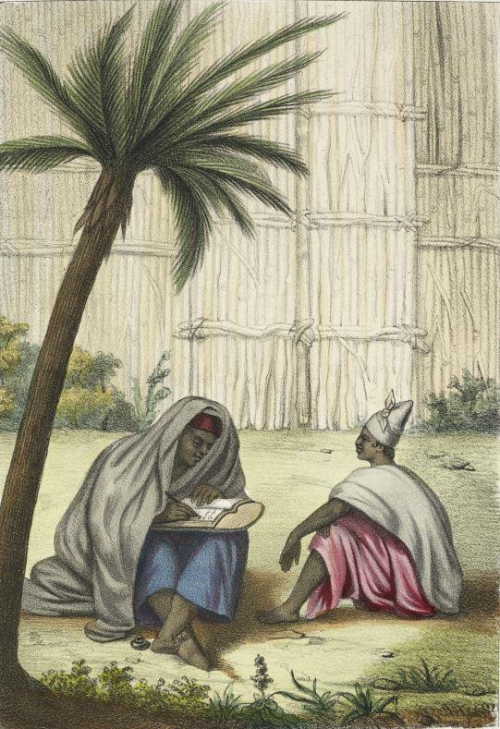 Arabic writing in West Africa: a marabout (or Muslim religious leader) writes an amulet for a widow. Note the ink-pot at his feet. (P. D. Boilat, Esquisses sénégalaises (Paris, 1853). 10096.h.9)

In this context, the British Library’s small collection of West African manuscripts in Arabic script is significant. The catalogue records for the manuscripts were produced in 2016–2017 by then PhD student Paul Naylor, who described them here and here.

Most of the manuscripts have been digitised, and are freely available online via the British Library’s website. This digitised material, summarised below, consists of thirteen items: five bound composite volumes of manuscripts, five Qur’ans and three other works. Catalogue records for these works can be found in Explore Archives and Manuscripts.

A sixth Qur’an (Or 16992), acquired shortly before lockdown, is still being processed. Sections of the Qur’an are also found in some of the composite volumes. 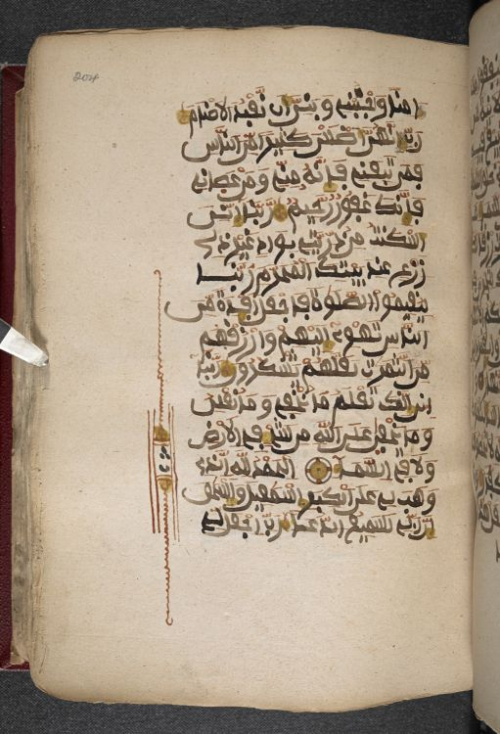 2) Two illuminated copies of the Dalāʾil al-Khayrāt, a popular Islamic devotional work, Or 6575 and Or 16924.

3) The Kitāb al-Balagh al-Minan, a book of number squares (Ar. awfāq) considered to have spiritual power, Or 6576.

These five composite volumes all contain a variety of works, many of which are very short, some even consisting of only one folio. The total number of individual manuscripts is therefore considerably higher than fourteen: I estimate that we hold 239 West African manuscripts in total. 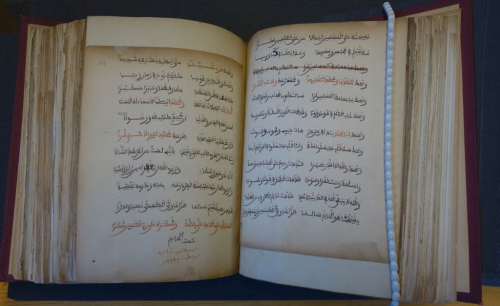 In West Africa, manuscripts were (and are) normally loose leaf, often with a leather carrying case. Some of the British Library’s manuscripts have been kept in loose-leaf format, and some have their original leather case. However, during the nineteenth century some were bound on acquisition by the British Museum Library (which joined with other libraries to become the British Library in 1973): this applies to all the composite volumes, and two of the Qur’ans. When, recently, the covers of the bound Qur’an at shelfmark Or 6992 were found to have broken away, we decided that, rather than replace a binding which was not of West African origin, it would be appropriate to disbind the manuscript completely. Today, it is in its original loose-leaf form, protected by a specially constructed buckram box.

A loose-leaf work on numerology, probably from Ghana, in its original leather case. (British Library, Or 6576 f. 33v-34r, mid-19th century)

The manuscripts are all written in Arabic script, and almost all the text is in Arabic. African languages, notably Soninke and Fulfulde, also feature. They were written here in Arabic script, a practice called ajami in Africa. Most of them date from the 19th century.

The majority of the manuscripts were acquired by the British Museum Library between 1895 and 1917, with a few being added in more recent years. Provenance research (noted in the catalogue records) has revealed the names of many of the donors or vendors, some of whom were in the British armed forces and colonial civil and diplomatic services. However, we usually have little idea of the circumstances in which each item was acquired. An exception is Or 6559, whose donor wrote that it ‘was brought from Kumasi (West Africa) in 1874 by a bluejacket’ (that is, a British sailor). Since the British invaded Asante and sacked its capital, Kumasi, in 1873–1874, this volume seems to have been acquired in the context of war, although we do not know exactly how.

The British Library also hosts other extensive digital collections in the form of manuscripts and archives digitised through funding by the Endangered Archives Programme. These are rich in West African manuscripts, including extensive collections from Djenné in Mali and documents in ajami from Senegal. They also include an important collection from Bamum, Cameroon, in the Bamum language and script. (Note that the British Library only holds digital copies of these items, not the originals.)

The British Library is keen to share information about our collections, and to make them available for research as widely as possible, particularly in the countries from which they originate. In addition to the digital versions available online, readers are welcome to view the West African manuscripts in the Asian and African Studies Reading Room at St Pancras, London. Here’s how to get a Reader Pass.

English, Charlie, The book smugglers of Timbuktu : the quest for this storied city and the race to save its treasures (London: William Collins, 2018)

Hammer, Joshua, The bad-ass librarians of Timbuktu and their race to save the world's most precious manuscripts (London: Simon & Schuster, 2017)