A puzzling fragment from a Thai meditation manual

Yogāvacara meditation practices, also known as borān kammathāna, were an integral part of Theravāda Buddhism in Southeast Asia until monastic reforms of the 19th and early 20th centuries discouraged esoteric meditation practices. Yogāvacara manuals incorporate teachings from canonical and post-canonical Buddhist literature: for example, meditations on the foul, kasiṇa meditation, contemplation of Ten Forms of Knowledge etc. This article introduces a manuscript fragment (Or 14447) from 18th-century Ayutthaya (Central Thailand), which has puzzled our Thai curators, past and present, because of its unusual illustrations, painting style and format.

Complete view of the illustrated (front) side of the Yogāvacara manual at the British Library, Or 14447

The lavishly illustrated manuscript fragment consists of just three complete and two half folios with Pali and Thai text in Khmer and Khom scripts (a Thai adaptation of Khmer script) on the front side. Short passages written in black ink contain instructions for the person called Yogāvacara (spelled yogābacara in the manuscript). The back side contains only text in Thai language written in Thai script. It was purchased from Hentell Ltd Hong Kong in 1989.

The fragment is in the format of a paper folding book (samut khoi) in portrait orientation, which in the Thai manuscript tradition is mostly used for divination manuals (phrommachāt), medical treatises, yantra manuals or poetry books (konlabot).

The illustrations relate to Yogāvacara meditations on the Ten Forms of Knowledge which are briefly mentioned in the Abhidhammattha-saṅgaha, a Pali text attributed to Ācariya Anuruddha who is thought to have lived between the 8th to 12th century. In its essence the content is based on Buddhaghoṣa's Visuddhimagga, which mentions only Eight Forms of Knowledge, but elaborates in detail on graphic descriptions associated with them. The Ten Forms of Knowledge describe stages of insight that a meditator passes through on the path to nibbāna.

The illustrations are in the Ayutthaya painting style with a strong Mon influence. The minimal use of gold and liberal use of orange, the execution of mountains and rocky outcrops in the “Chinese” style with a light watery wash, the use of the Krajang Pattiyan pattern, and the depiction of a round halo around the monk’s head distinguish the painting style as Ayutthayan of the late 17th to early 18th century.

However, the style is not entirely Thai due to features often found in Mon/Shan/Burmese inspired paintings like the voluminous tail of the hamsa bird, the depiction of the monk in side view, the flow of the monk’s outer robe, and the monk’s umbrella (personal communication with Irving Chan Johnson, 11.6.2021). It is possible that the artist was Mon, or the manuscript was produced in a local Mon community in the Ayutthaya Kingdom.

If we assume that the order of the paintings illustrating the Ten Forms of Knowledge is consistent with the order of descriptions in the known Pali text sources, this manuscript must be viewed from right to left. The manuscript had previously been foliated with pencil starting with “1” in the top left corner, as one would usually read a Thai folding book in portrait orientation; however, this is incorrect. 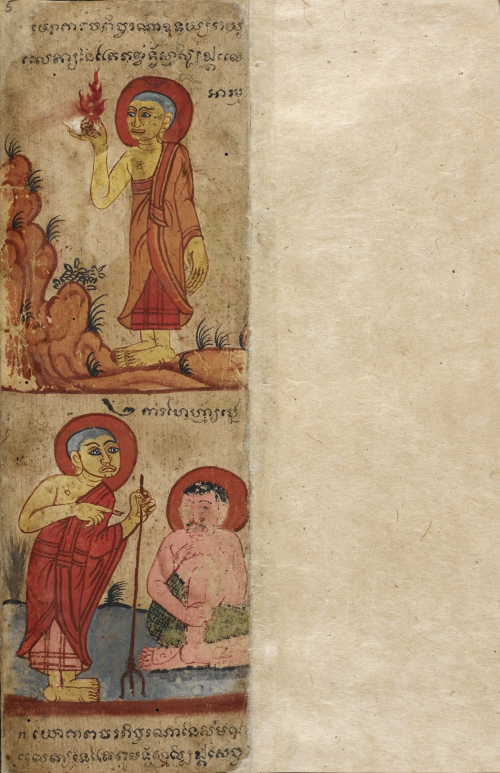 Knowledge of calm and insight is represented in the bottom illustration by a monk with a red halo, holding a staff and pointing towards a man with a red halo, sitting on the floor. The Thai-Pali text on this folio is incomplete. At the top is an illustration related to Knowledge of rise and fall, represented by a monk with red halo holding a flame. The illustrations on the next folio represent the third and fourth Forms of Knowledge: Knowledge of disruption (bhangānudassana-ñāṇa) and Knowledge of what is to be feared (bhayatupaṭṭhāna-dassana-ñāṇa).

At the bottom, representing the Knowledge of disruption, is a monk with a red halo facing a corpse by the riverside. The monk is touching the corpse with his staff. The illustration at the top represents Knowledge of what is to be feared. A monk with a red halo crosses his hands in front of his chest while facing a corpse and a lion emerging from a cave. The Thai-Pali text above says: "The meditator [yogābacara] contemplating the bhaiyavipasanāñāṇa sees saṃsāra as scary, just like a man who goes to rest in a cave where a rājasīha [mythical lion] resides. When the man leaves, he sees the rājasīha and is very scared and seeks to escape the rājasīha" (translation by Trent Walker). 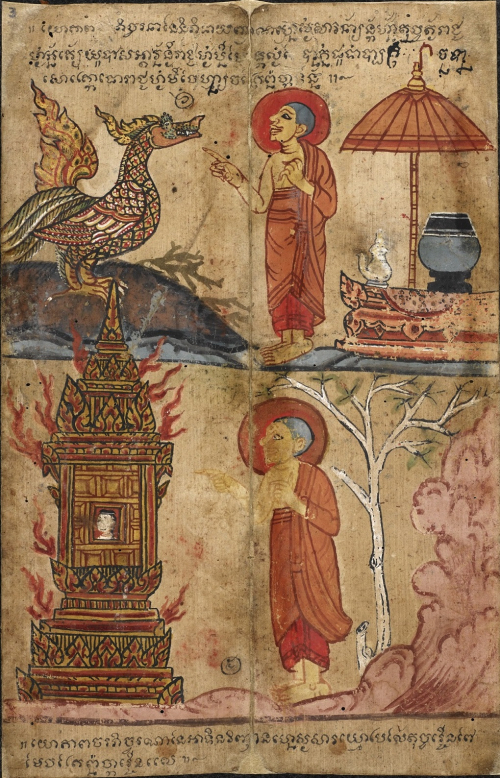 The image below is related to Knowledge of evil, depicting a monk with a red halo, who is pointing towards a burning house. The Thai-Pali text reads: “The meditator [yogābacara] contemplating the ādinaviñāṇa sees saṃsāra and flees, just like [someone in] a burning house seeks to escape the house".

At the top is a monk with a red halo pointing towards a bird; behind him are an alms bowl, meditation umbrella of a forest monk and a water vessel. It represents the Knowledge of disgust, and the Thai-Pali caption says "The meditator [yogābacara] contemplating the nibhidāyañāṇa sees saṃsāra and is very disgusted by it, just like a royal swan that was formerly in a clean forest but one day flies and ends up in a village of [evil-doers?]… like the royal swan who is disgusted and seeks to escape from there" (translation by Trent Walker). 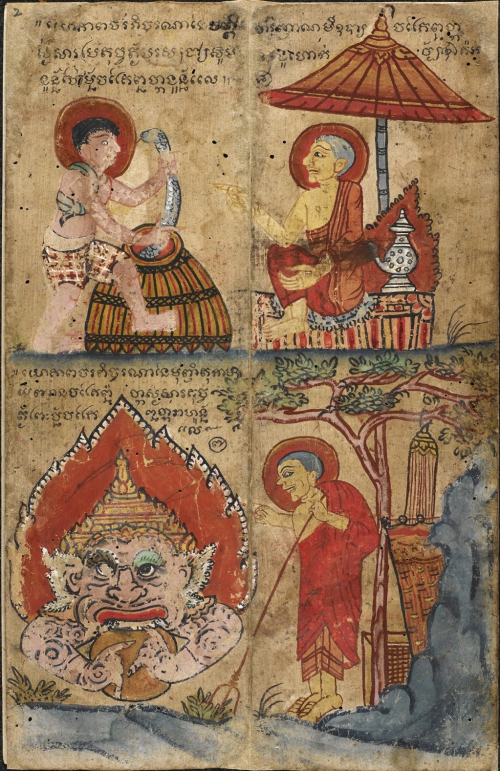 The illustrations on the fourth folio represent the seventh and eighth Forms of Knowledge: Knowledge of desire for freedom (muccitukamyatādassana-ñāṇa) and Knowledge of reflection (paṭisaṅkhānupassanā-ñāṇa).

Shown below is a monk with a red halo pointing towards Rāhu, the demon swallowing the moon, which relates to the Knowledge of desire for freedom. The Thai-Pali text reads: "The meditator [yogābacara] contemplating the muñcitukāmāyañāṇa seeks to be freed from saṃsāra, just like the moon seeks to be freed from Rāhu" (translation by Trent Walker).

Above is a monk with red halo, sitting under his umbrella, pointing towards a man with a red halo, who has caught a snake and is putting it into a fishing basket. This relates to the Knowledge of reflection. The Thai-Pali caption of this illustration in the manuscript states: "The meditator [yogābacara] contemplating the paṭi[saṅ]khārañāṇa has the means of seeking to be freed from saṃsāra, just like a man... [illegible] …. a cobra and grasps its neck and seeks to be freed from that snake" (translation by Trent Walker). 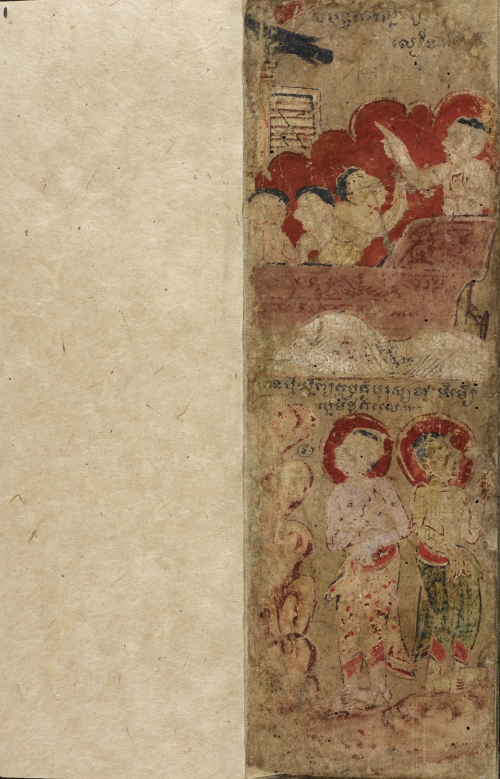 The Visuddhimagga mentions two scenes that are depicted in the illustrations on this folio: below showing a divorced wife finding a new lover while the former husband remains equanimous; and above there are traders on a ship using a land-finding crow when the ship has gone off course, comparing this scene with the meditator’s finding of nibbāna through rejecting the occurrence of all formations.

The paleography of the text in Khmer/Khom script accompanying the illustrations suggests that it was written towards the end of the 18th century, especially the less rounded shape of the letter ว, which in the early 18th century and before usually looks very much like modern Khmer វ (Trent Walker, personal communication 1.7.2021).

Yogāvacara manuals, mostly from the 19th century, survive in manuscript collections in Thailand, but in library catalogues and publications they are often called Pritsana Tham, meaning “Dhamma puzzle” (H. Woodward, 2021). The method of reading Yogāvacara manuals from right to left - which in the Thai tradition appear as if they were read from back to front - may have brought about the description “Dhamma puzzles”. However, the format and direction of reading Yogāvacara manuals is similar to folding books found in the East and Central Asian traditions, where manuscripts from earlier periods survive, like for example the Laṅkāvatāra Sūtra, a 9th-century folding book with text in Chinese and Tibetan, or a Tangut folding book dating back to between the 10th to 13th century containing the Mahāprajñāpāramitā Sūtra. Yogāvacara manuals may be a central piece in the puzzle that is trying to explain how paper folding books and esoteric meditation methods came to mainland Southeast Asia.

I would like to thank Trent Walker (Stanford University) and Irving Chan Johnson (National University of Singapore) for their invaluable advice and support with translations. This blog post is an extract of a full article published in the SEALG Newsletter 53.