Lost and refound: a Batak note on bamboo to John Anderson

John Anderson (1795-1845) was a Scottish official of the East India Company who was based in Penang from 1813 to 1830. In February and March 1823 Anderson undertook a politico-commercial mission on behalf of the governor of Penang to various states along the east coast of Sumatra, including Deli, Asahan, Langkat and Siak, as well as venturing into Batak territories. His account of this journey was published a few years later, as Mission to the East Coast of Sumatra, in 1823, under the direction of the Government of Prince of Wales' Island: including historical and descriptive Sketches of the Country, an Account of the Commerce, Population, and the Manners and Customs of the Inhabitants, and a Visit to the Batta Cannibal States in the Interior, (Edinburgh, 1826). 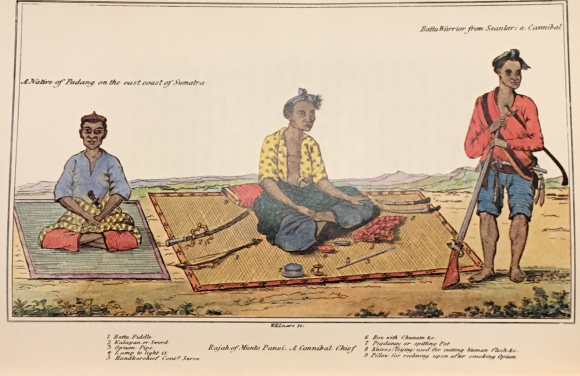 Seated in the centre of this drawing is the Raja of Buntu Pane, in Mission to the East Coast of Sumatra in 1823 by John Anderson, first published in Edinburgh by William Blackwood, 1826; republished in facsimile (with coloured plates) in Kuala Lumpur by Oxford University Press, 1970; facing p. 143. According to Anderson, ‘The Drawings were executed by a Chinese draughtsman, under a great variety of impediments and disadvantages, sometimes in great haste, in a small boat.’

One of the local Sumatran rulers who Anderson encountered was the Batak Raja of Buntu Pane in Asahan (referred to in Anderson’s account as Munto Panei). In his book Anderson included a portrait of the ‘Rajah of Munto Panei’, seated on a mat surrounded by his weapons, a musical instrument and other accoutrements (see above). As Anderson was particularly interested in the market for British trade products, he noted carefully the dress of the Raja and his chiefs: ‘European chintz bajoos [baju, jacket], Buggues sarongs, and Acehen or Batubara trowsers, with neat handkerchief on their head, of Java or British manusfacture’ (Anderson 1826: 153). Anderson spent some time with the Raja of Bunto Pane, and when he finally took leave, the Raja ‘begged me to send him two dogs to catch deer; and in order that I might not forget his commission, he wrote upon a joint of bamboo, a memorandum to that effect in his own language, which I brought with me; also the numbers one to ten’ (Anderson 1826: 154).

Batak message inscribed on bamboo from the Raja of Buntu Pane to John Anderson, 1823, stored together with a small knife and four blowpipe darts. British Library, MSS Batak 1

It is not known if Anderson did ever send the requested dogs, but he evidently presented his aide-memoire to the East India Company, for this ‘joint of bamboo’ appears to have been the first Batak manuscript to enter the India Office Library. Today it bears the shelfmark MSS Batak 1, and is stored together with a small knife and four darts from a blowpipe. A small piece of paper (originally) attached says ‘specimen of Batta writing, with a knife written and presented by J. Anderson, Esqr.'; the piece of paper is no longer present but a discoloured rectangle visible on the bamboo presumably indicated its location. It is not known whether the knife was that used to incise the writing on the bamboo; perhaps the darts (with poisoned tips) were the type that would have been used for hunting deer.

In 1848 the Dutch linguist Herman Neubronner van der Tuuk visited London and examined the six Batak manuscripts held in the India Office Library (MSS Batak 1-6). He wrote ‘A short account of the Batta manuscripts belonging to the Library of the East India Company’, the autograph manuscript of which is still in the British Library (MSS Eur B105: Download VanderTuuk1848). Van der Tuuk described the bamboo as being inscribed on the left side with the Batak words for the numbers from one to ten, written by the King of Buntu Pane at the request of Anderson, and on the right side with a memorandum to Anderson (called Darsen) asking him not to forget to send to the King of Buntu Pane two dogs from Penang.

The start of the inscribed Batak texts, marked by decorative panels: on the left is the list of numbers, and following the vertical line to the right is the note to Andersen requesting two dogs to be sent from Penang, 1823. British Library, MSS Batak 1

However, when M.C. Ricklefs and P. Voorhoeve came to compile their landmark catalogue of Indonesian manuscripts in Great Britain, first published in 1977, this manuscript was nowhere to be seen. They reached the gloomy conclusion: “This MS is now missing, and has probably decomposed since it was seen by van der Tuuk in 1848” (Ricklefs and Voorhoeve 1977: 12).

Happily, this was not actually the case. Soon after I joined the British Library in 1986, during a visit to the India Office Library and Records (at the time still housed in Blackfriars Road), my colleague Salim Qureishi, one of the IOLR curators, alerted me to a strange object he had found and asked if it was from my collection. It turned out to be the long-lost MSS Batak 1, which had simply been misplaced on another shelf. However Van der Tuuk’s description still proved invaluable, for in the intervening century the paper label, identifying J. Anderson as the donor, had disappeared.

Manuscripts are, by definition, unique witnesses to place and time. The loss of a manuscript can thus be a harrowing tragedy, as exemplified by the website Lost manuscripts: what happens when words disappear. Among the various types of losses explored in articles on this site – alongside Burned manuscripts, Eaten manuscripts and Stolen manuscripts – is the category of Misplaced manuscripts. MSS Batak 1 is clearly not alone in having been lost, and then re-found.

MSS Batak 1, and all other Batak manuscripts in the British Library, have recently been digitised in collaboration with the Centre for the Study of Manuscript Cultures (CSMC) at the University of Hamburg.