At last month’s departmental meeting of the British Library's Asian and African Collections (AAC), staff were invited to talk about recent acquisitions of interest from their respective sections. Individuals were free to choose anything that they thought might intrigue their colleagues, whether manuscript or print, old or new, a representative of a genre or a unique exemplar. A selection of these acquistions is presented here, each introduced by the relevant curator or specialist, highlighting the significance of the item.

Ilana Tahan, Lead Curator for Hebrew and the Christian Orient, introduced a rare Samaritan imprint, which she acquired for AAC jointly with Sophie Defrance, Romance Collections Curator in European and American Collections:

‘Alphabethum Samaritanum was printed by Jean-Joseph Marcel, and published in Paris by the Imprimerie Nationale in c. 1815. It is a book of type specimens, which features Samaritan text cut specifically for it, some with Hebrew transliterations. The book has 48 leaves, with pages numbered 5 to 100. This copy, which is unbound, is one of only two known complete copies, the other being in the National Library of Israel. There are also two incomplete copies known: one in The Houghton Library at Harvard, lacking the last leaf, and another at Oxford, lacking the last three leaves.’ 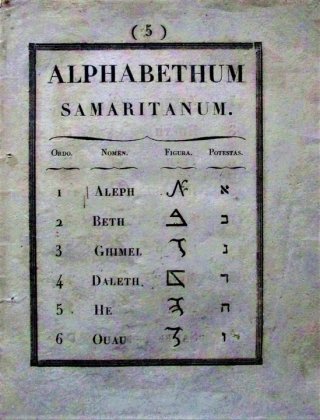 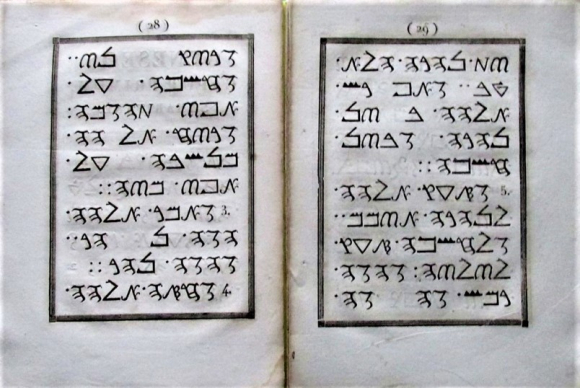 ‘In recent years, the Library has expanded greatly its holdings of periodicals in Kurdish languages and Kırmancki, including magazines that have long since ceased publication. Recently, it acquired two periodicals from the 1990s, when the use of Kurdish was banned in Turkey. These include Tewlo, the oldest Kurdish-language satirical magazine from Turkey, and its successor Pîne. In addition, the Library purchased the later satirical publication Golik, which collects drawings and prose from inmates of Turkish prisons. All works are examples of the vibrant and diverse field of satirical illustration in the Kurdish community.' 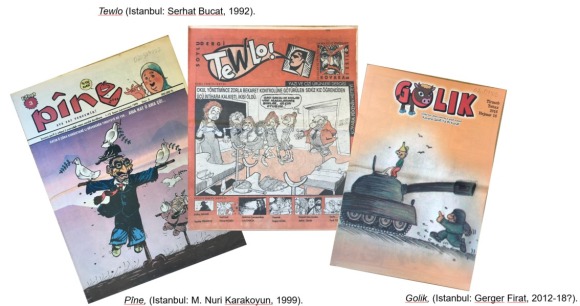 'One of the most exquisite and important Persian books that the British library purchased last year is Kitāb'ārāyī-i nuskhah'hā-yi hunarī-i dawrah-i Qājār, ‘Book decoration and illumination of the Qajar period’, based on manuscripts held in the National Library of Iran. The author, Ḥabīb Allāh `Aẓīmī, selected images of 80 manuscripts of the Qajar period (1794-1925), which all reproduced in high-quality colour. The first chapter deals with theoretical aspects of decoration and illumination of manuscripts in the Qajar period. In the second chapter the author has analysed decorations and illustrations inside the manuscripts and finally the third chapter deals with methods by which manuscript covers were decorated and designed. The book was published by Majmaʿ-i Z̲akhāʾir-i Islāmī (Qum, Iran) in 2021, and has the shelfmark YP.2021.b.429.' 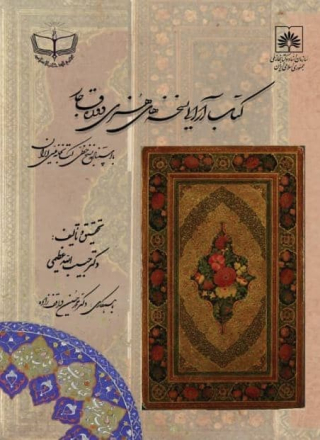 ‘These beautifully illustrated leaves represent an intriguing cross-over between two categories of material that already exist within the Chinese collections of the British Library. Leaves from the peepal tree (a.k.a. sacred fig, Bodhi tree, or ficus relgiosa) can be found painted with religious imagery in some Buddhist albums, but here we see them used for distinctly secular purposes. They depict street scenes, occupations, ships, flowers, birds, and other themes that are typical of late Qing export paintings. These illustrations had once been bound in a single album but were removed for sale as individual artworks. One leaf had already been sold this way before the album was acquired by the British Library so it was sadly not a complete set, but the original album covers were retained and will be preserved alongside the 23 remaining leaves.’ 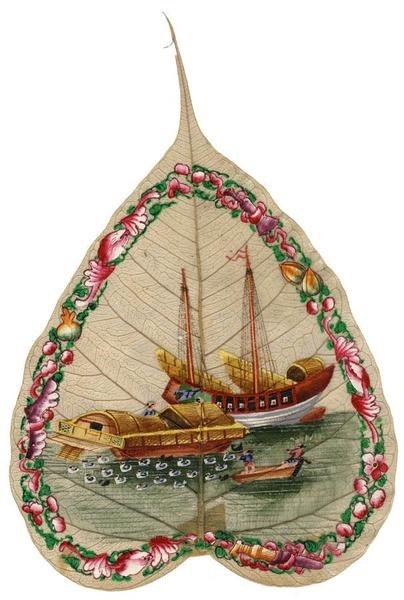 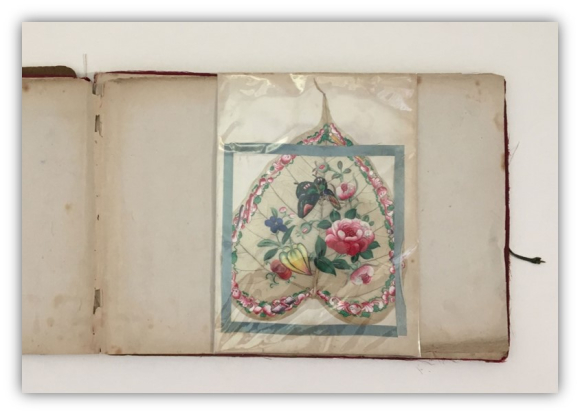 The original album in which the Chinese export paintings on fig leaves were housed. Or 17015

Yasuyo Ohtsuka, Curator for Japanese, spoke about how the Japanese collections have continued to develop holdings of Japanese textile design and pattern books:

‘A notable recent acquisition is Or 17024: Japanese textile designs, Echigoya Magobei, late 18th century. This untitled manuscript contains 35 water-colour illustrations depicting patterns for textiles. The name Echigoya Magobē 越後屋孫兵衛 is written on the inside of the rear cover. Echigoya was a large kimono shop founded in 1673 in Nihonbashi (Tokyo). Later this shop was incorporated into the Mitsukoshi Department store. The manuscript was probably used as a customer manual or an “idea book” for designs for ordering kimonos and other types of textiles.’ 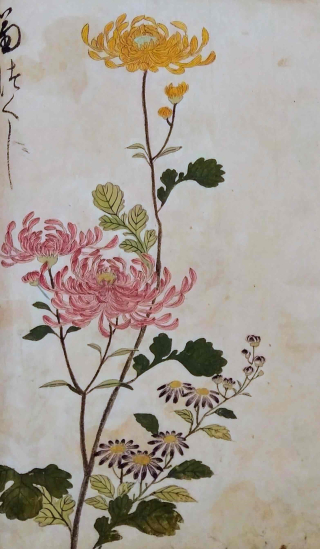 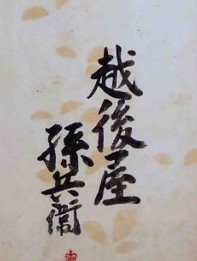 Japanese textile designs, late 18th century, with the name Echigoya Magobei on the inside of the rear cover. Or 17024

‘ORB Misc 181 is an early 20th century set of 48 metal movable type  for printing the Japanese hiragana syllabary, one of two syllabaries used in combination with Chinese characters to write Japanese. The type are organised according to iroha order, a traditional way of ordering the symbols of the syllabary derived from a poem in which each syllable occurs only once.’ 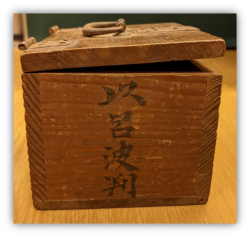 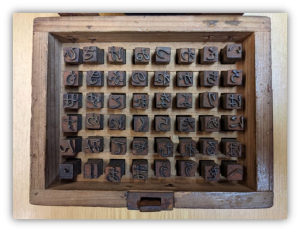 A set of 48 metal movable type  for printing the Japanese hiragana syllabary, in a wooden box. ORB Misc 181

Hamish also spoke on a small collection of LGBT items which have recently been added to the Japanese collection. 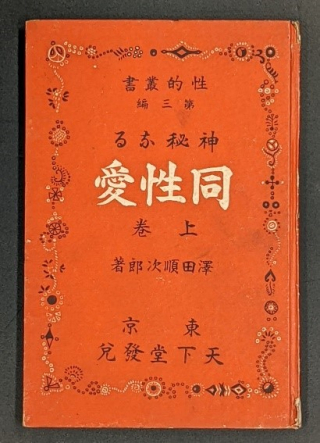 Shizu no Odamaki 賤のおだまき or ‘The Humble Man’s Bobbin’ (ORB.30/9093) is a novel which recounts the martial exploits and romantic relationship of a pair of 16th-century warriors. It was a popular example of nanshoku (homosexual) literature – this version was published in 1884. 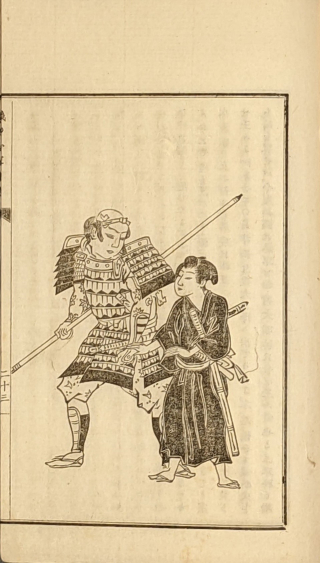 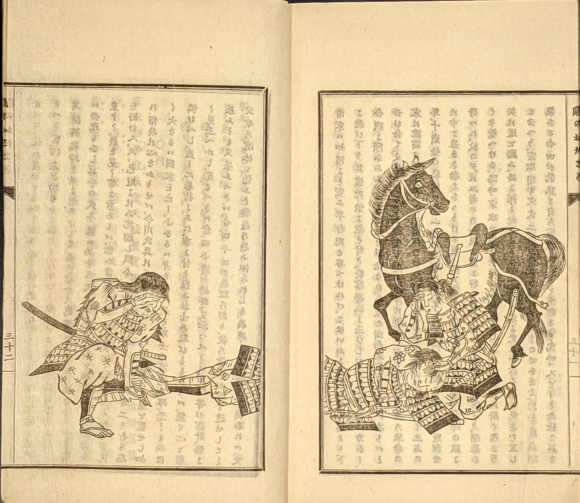 This is just a small selection of the varied items acquired within the past year or so by the Asian and African Collections of the British Library.  As recent acquisitions, some of the items are still being processed, but eventually all the printed materials will be accessible via the British Library's online catalogue Explore, while manuscript material can be found on Explore Archives and Manuscripts.