Ariya Metteyya, the Buddha of the future

Ariya Metteyya (Sanskrit: Maitreya), the future Buddha, is at the centre of some of the most beautiful illustrations in Thai Buddhist manuscripts. According to canonical scriptures, Ariya Metteyya is the fifth in the lineage of Buddhas (Tathāgata) of the current aeon, and successor of the 28 Buddhas of the past. Ariya means “noble”, and Metteyya is derived from the Pali word mātreyya which refers to “one's mother” and “motherloving”. The previous Buddha Gotama predicted in the Cakkavatti-sῑhanāda-sutta that Ariya Metteyya will be the Buddha of the future, following his rebirth in the human realm, renunciation of worldly life and attainment of enlightenment under a Naga tree (cobra saffron, Lat. Mesua ferrea). 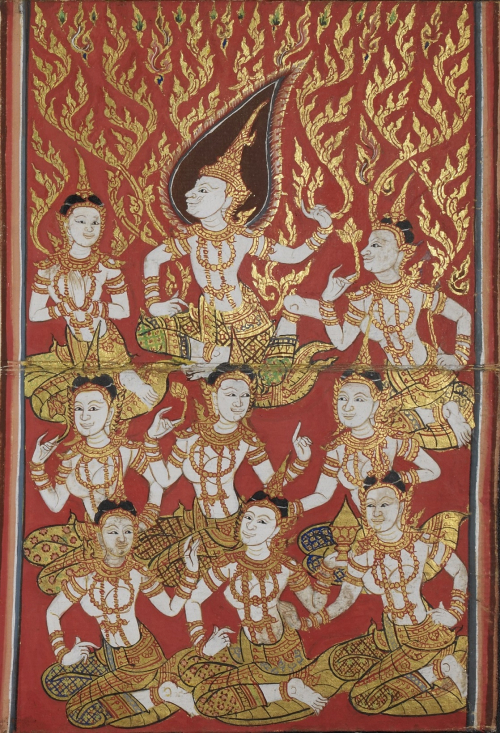 The future Buddha, surrounded by deities in Tuṣita heaven, illustrated in a folding book containing extracts from the Tipiṭaka and the story of Phra Malai, central Thailand, 1875. British Library Or 6630, f. 43

The story of the future Buddha appears in another canonical source entitled Buddhavaṃsa (chronicle of Buddhas) in the Khuddaka Nikāya. It gives details of the life of Buddha Gotama and the 24 Buddhas before him, as well as Ariya Metteyya.

An extra-canonical source that mentions the future Buddha is the Mahāvaṃsa (“Great Chronicle” of Sri Lanka), attributed to the monk Mahānāma. In this text, written in the 5th or 6th century CE, it is stated that Ariya Metteyya currently resides in the Tuṣita heaven as a deity called Natha-deva awaiting rebirth in the human realm.

Another source that describes the life, meritorious acts and attainment of enlightenment of Ariya Metteyya is known under the title Anāgatavaṃsa (account of the future), a work attributed to Ashin Kassapa (1160-1230 CE).

The above-mentioned sources brought knowledge of Ariya Metteyya from Sri Lanka to Southeast Asia. In the Thai Buddhist tradition, the future Buddha is also known as Phra Sri An. Exquisite paintings of him, often lavishly decorated with gold leaf, can be found in manuscripts containing the popular legend of Phra Malai, a monk-saint who was able to travel to the Buddhist heavens and hells as a result of his accumulated merit. The story is often included, among extracts from the Abhidhamma-piṭaka, in Thai funeral and commemoration books from the 19th century. The oldest known extant manuscript containing this legend is a palm-leaf book in Northern Thai (Lanna) Dhamma script, dating back to 1516 CE (Brereton, 1993, p. 141)

Illustrations of Phra Malai with Indra at the Chulamani Chedi (left) and arrival of Ariya Metteyya with deities (right) from Tuṣita heaven to pay reverence to the celestial stupa. Folding book from central Thailand, 19th century. British Library Or 14115, f. 59

One episode in this legend elaborates on Phra Malai’s visit to the Tāvatiṃsa heaven, where he meets the god Indra (Sakka) at the celestial stupa Chulamani Chedi. While the two are conversing, myriads of devatā (deities) and finally also the future Buddha appear from another heaven, Tuṣita, to pay reverence to the stupa. Ariya Metteyya then gives Phra Malai a message about the future of mankind, and advice to make merit and to listen to recitations of the Vessantara Jātaka for those who wish to be reborn in the era of the future Buddha.

The future Buddha with deities (right) and withayathon as flag-bearers (left) in a folding book with extracts from the Abhidhamma-piṭaka and Phra Malai. Central Thailand, 1894. British Library Or 16101, f. 51

Although most illustrated Phra Malai manuscripts include the standardised pair of paintings showing the scene at the celestial stupa, Thai artists of the 19th century used many other options to depict Ariya Metteyya. In the image above one can see the future Buddha in an elaborately decorated red aura with two deities partially hidden in clouds (right), whereas on the left side the artist decided to paint male withayathon (Pali: vijjadhara, “keepers of knowledge”, in Thai also “scholars of magic”) as flag-bearers announcing the arrival of Ariya Metteyya.

Painted in a similar manner, but with more attention to detail and in extraordinary artistic quality, are the illustrations below showing the future Buddha in a red aura with six deities (right), and two female deities as flag-bearers (left).

The future Buddha in a large red aura (right) with deities as flag-bearers (left). Folding book with extracts from the Abhidhamma-piṭaka and Phra Malai. Central Thailand, 1849. British Library Or 14838, f. 57

In the same manuscript, dated 1849, there is another - very unusual - illustration of the scene in Tāvatiṃsa heaven (shown below): as expected, on the left side is Phra Malai in conversation with Indra and another deity at the celestial stupa. However, on the right side, where normally the future Buddha appears, there is a female figure in a large red aura, floating on clouds in the sky. Like the future Buddha on the preceding folio, she is holding a lotus bud, symbol of imminent enlightenment, and she is accompanied by female deities – just in the same way Ariya Metteyya is usually depicted. We do not know if the painter aimed to express the thought that the future Buddha could be a woman, or whether they may have drawn inspiration from the idea of female Buddhas and Bodhisattvas in esoteric Buddhism. Or perhaps it may have been the wish of the patrons, a mother and her two children, who commissioned this manuscript to make merit on behalf of the mother’s parents, and who expressed in the colophon their hope to attain enlightenment.

Phra Malai with Indra and another deity at the Chulamani Chedi (left) and female figure with red aura in place of the future Buddha (right) with deities. Folding book from central Thailand, 1849. British Library, Or 14838, f. 58

The story of Phra Malai concludes with Ariya Metteyya’s prediction of the deterioration of Buddhism and degeneration of mankind 5000 years after Buddha Gotama. This is then followed by the birth of the Buddha-to-be in an era in which the earth flourishes and humans are living meritorious lives free from suffering. The future Buddha promises to help all people to transcend saṃsāra - the cycle of birth, death and rebirth - through liberation from greed, hatred and delusion. Sometimes depictions of the blissful life in the future are included in Phra Malai manuscripts, like the example shown below where people are plucking gold jewellery from a wishing tree (left) and enjoying sweets while resting in the shade of a blossoming tree (right).

Indeed, the hope of encountering Ariya Metteyya is frequently mentioned in a colophon on the last folio of Thai Buddhist manuscripts. The example below shows a detail from a colophon in a folding book dated 1882, which contains extracts from the Tipiṭaka and the legend of Phra Malai. The future Buddha is mentioned twice here: once called Phra Sri An (underlined orange) and once called Phra Sri Anriya (underlined red), both times referring to Ariya Metteyya.

The idea of Ariya Metteyya still enjoys great popularity among Buddhists in Thailand today, not least because it is part of the Thai Buddhist concept of a perfect world. It describes an idealised future state of society with prosperity, health, happiness, justice, righteousness and peace which is symbolically expressed through images of Ariya Metteyya in temple murals and sculptures. The examples below from three different Thai manuscripts show that depictions of the future Buddha are easily recognisable because they are highly standardised, although minor variations can be visible like the size of the aura, background, the number of accompanying deities and objects held in the hand of Ariya Metteyya.

Posted by Annabel Gallop at 1:56 AM