Christian Bibles in Muslim Robes with Jewish Glosses: Arundel Or.15 and other Medieval Coptic Arabic Bible Translations at the British Library

One of the most impressive Christian Arabic manuscripts at the British Library is Arundel Or.15. This beautifully ornamented codex, presented like a Mamluk Quran, contains a carefully copied translation of the Psalms into Arabic preceded by an elaborate introduction on the use and perception of this biblical book. 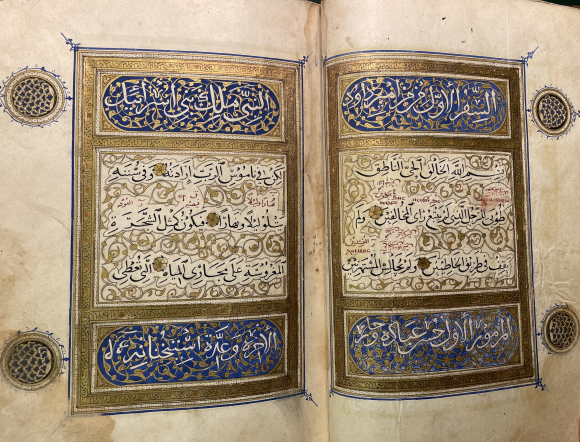 The codex is undated and anonymous but the handwriting of the main text appears to be identical with that of the Arabic translation of the Pentateuch in Paris (BnF. Ar. 12). The latter was composed by Jirjis b. al-qass Abū al-Mufaḍḍal b. Amīn al-Mulk Luṭf Allāh and dated 1353. It was copied from a manuscript copied by (bi-khaṭṭ) al-Shams ibn Kabar (f. 290r), a known Coptic writer who served as the secretary of a Mamluk minister. Ibn Kabar died in 1324, around thirty years before the copy was made, but it is likely that both he and Jirjis belonged to the same scribal elite and shared common views on the literature they produced.

The ornamented frames and calligraphic style used for the rubrics in the two copies differ somewhat, but both codices are exactly the same size, are arranged in groupings of five sheets (quinions) with the quire number written in conjunction with the word kurrās (quire) and are foliated using Coptic Epact numbers. 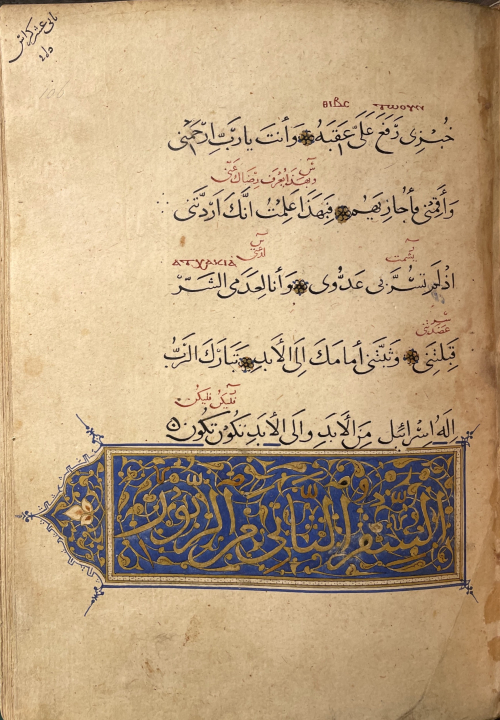 Yet another luxurious copy produced by Jirjis is found in Copt. Museum, Bibl. 90. Here he is called Jirjis Abū al-Faḍl ibn Luṭf Allāh, yet the handwriting in the main text appears to be identical to that in Arundel Or.15 and the Paris manuscript, which are both written in elegant naskh and include headings in muḥaqqaq and other scripts associated with Qurans. This Gospel translation was produced in 1340 (Hunt, p.122) during the time of Buṭrus, the metropolitan of the Copts in Jerusalem and Syria.

Both the Paris manuscript and Arundel Or.15 contain a similar text critical apparatus. The scribe collated the main text with several different copies and marked alternative renderings preceded by various sigla in red color. The same system is described in detail in another manuscript at the British Library: Or. 3382, dated 1264–65. This copy contains the Gospels in Arabic, which are carefully compared with the Coptic text and with Arabic translations from Greek and Syriac. In an epilogue appended to the translation, we learn that the text was originally composed by Ibn al-ʻAssāl. The text-critical system in these three copies can thus be associated with Ibn al-ʿAssāl and his text-critical projects of the thirteenth century.

The system is described in the epilogue to the Gospels: the letter qāf is used for Arabic translations of Coptic, sīn for Arabic translations of Syriac, and rāʼ for Arabic translations of Greek. A Coptic translation is also referenced. Combinations of letters, such as sīn- rāʼ, indicates that both the Syriac-based and the Greek-based translation share a reading. This interpretation makes perfect sense if applied to Arundel Or. 15. In the latter, we also find the siglum ʻayn, which almost certainly stands for Hebrew. From this and other various sigla used, we know that the scribe collated a considerable number of texts, some of which represented standard versions in Jewish and Christian communities in the Middle East. Most notably, the Hebrew-based version coincides with Rav Saadiah Gaon’s (d. 942) tafsīr of the Psalms, and Syriac-based glosses often match the Arabic translation by the East Syriac polymath Abū al-Faraj ʿAbd Allāh ibn al-Ṭayyib (d. 1043). 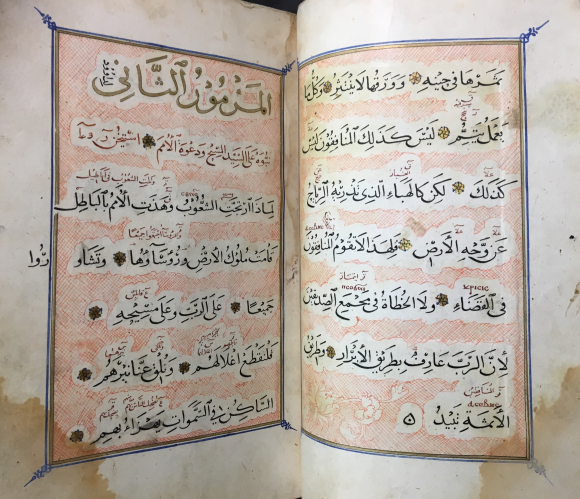 A beautiful illustration of king David precedes the Psalm translation. The illustration does not imitate typically Coptic iconography but rather resembles Byzantine images. David is featured as a scribe, in the process of composing his psalms. 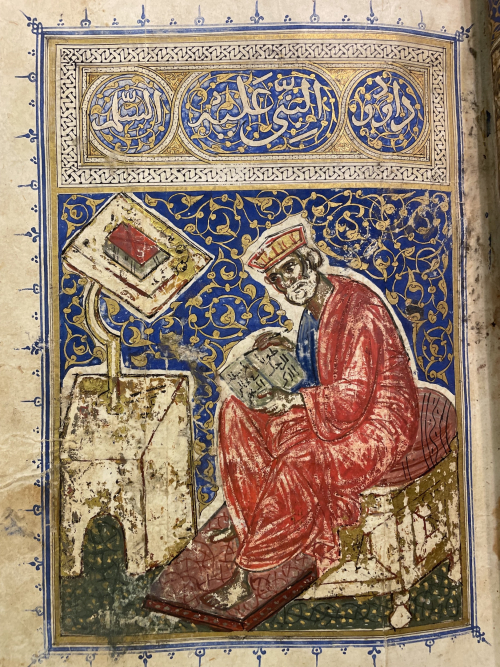 In format the codex resembles a Mamluk Quran, and the scribe used terms associated with Islam, such as al-fajr for ‘morning prayer’. The iconography, however, is Byzantine while the Psalm translation itself was compared with Coptic, Rūm (Orthodox), East Syriac, and Jewish bible versions. The manuscript thus testifies to an astonishing openness to other communities among the Copts in the thirteenth and fourteenth centuries. We understand from his ecclesiastical encyclopedia Miṣbāḥ al-Ẓulmah wa Īḍāḥ al-Khidmah (The Lamp of Shadows and the Illumination of Service) that Ibn Kabar was questioned for his inclusive approach to other people’s texts and traditions and to counteract such claims, he explains (my italics):

Also included are those later writers … who composed anything on religion, whether from those sects that are joined with us in confession, or those that are separated from us in creed. But we have not listed the compositions of this latter group, unless we have received thorough knowledge of them and grown in understanding from them, even though something differing from the views of the orthodox and inconsistent with the aims of the Jacobites [i.e. miaphysites] might be mixed in among them, for eminent men do not gather gems, without being interested in pearls: they pick out what is suitable without harping on the differences (Abū al-Barakāt, Catalog of Christian Literature in Arabic; tr. A McCollum). 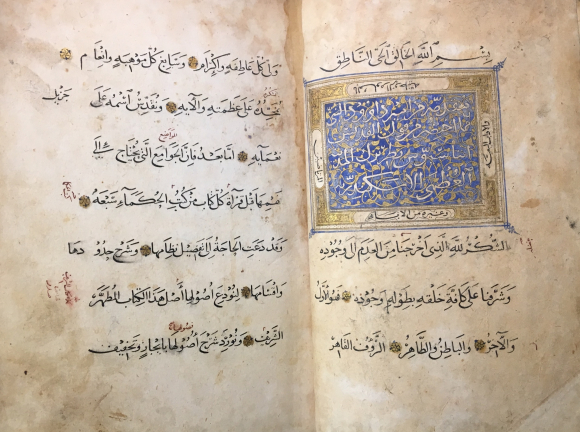 Beginning of the introduction to Psalms (BL Arundel Or.15, ff. 2v-3r)

The same or a similar scribal Coptic workshop produced several other impressive manuscripts. In addition to those already mentioned above and without the text-critical apparatus, British Library, Or. 1327 contains a beautifully ornamented Arabic Gospel translation, dated 1334. 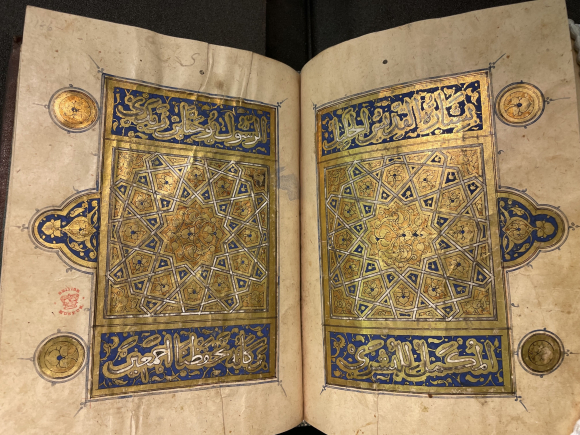 Another manuscript from the same time period is Add. MS 11856, a Gospel translation dated 1336–1337. This copy was presented to the Patriarch of Alexandria and all Africa and includes, besides the Gospel texts, short summaries of each book. Add. 11856 is less lavishly decorated than Arundel Or. 15 but includes beautiful frontispieces and  illustrations (Jerusalem 1000-1400: Four Gospels in Arabic): 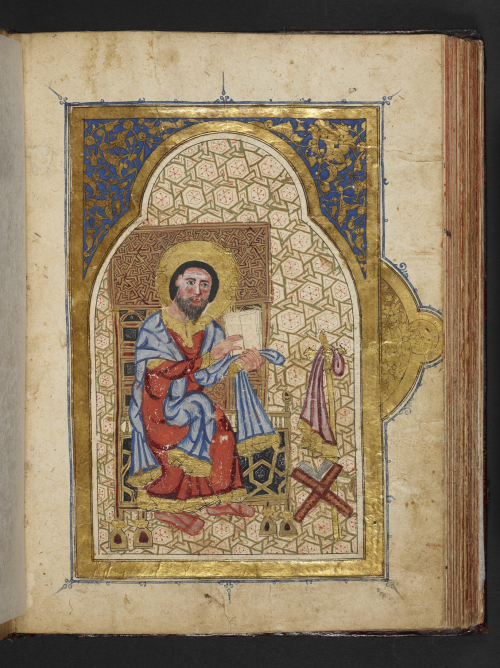 The examples provided in this blog represent a peak in Christian Arabic Bible production. Despite the political hardship the Coptic communities faced in the fourteenth century, scribal workshops thrived and produced expensive and scholarly advanced copies of the Bible, which impress their readers still today. These copies are not only aesthetically appealing but also show us how Bible translations could be used to mediate –or dominate– in socio-religious conflicts. By dressing their Bibles in typically Muslim robes, the robes were no longer Muslim, but an expression of holy Scriptures, and by using Jewish translations as one of several authoritative sources, the Jewish claim to Scripture was partially disarmed. It appears that for Ibn Kabar, ‘eminent men’ were those bold enough to delve into other peoples’ traditions and confident enough to decide what was good in them, regardless of origin. The ‘Coptic renaissance’ was indeed a bold project.

Posted by Ursula Sims-Williams at 10:54 PM