Reunited at last: a classical Thai verse novel from Ayutthaya

A unique set of five folding books containing the story of Sang Sinchai in Thai language has recently been reunited after a separation of about 200 years. The manuscripts, dating to before 1796, contain a retelling of an older text that was lost or destroyed during the devastation of the former Thai capital Ayutthaya in 1767 in the war with Burma. The existence of this copy of the verse novel remained widely unknown until 1958 when Thai historian Khachon Sukkhaphanit (1913-78) examined manuscripts at the British Museum and identified three volumes of Sang Sinchai. In 1973, these three volumes were transferred from the British Museum, along with other books and manuscripts, to the newly-formed British Library. 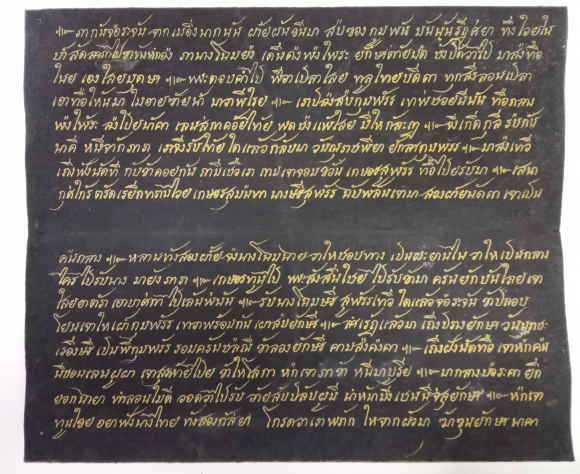 The folding books discovered in 1958 are volumes one (Add MS 12261), two (Add MS 12262/A) and four (Add MS 12264). Volumes three and five were thought to be missing until recently when a photocopy of an undated, handwritten list by King Chulalongkorn’s private advisor Henry Alabaster  (1836-1884) came to light during an initiative to catalogue Thai backlog material. The list describes seventeen Thai manuscripts found in the former India Office Library, among which were the two “missing” volumes of Sang Sinchai.

The reunited set consists of five folding books made from black mulberry paper in differing sizes. The Thai text was written in yellow gamboge ink, without illustrations. The title on the first folio of volume one reads Sang Sinchai samut nu’ng (สังสินชัย สหมุดนึ่ง original spelling). The spelling in all five volumes is generally consistent with 18th-century Thai orthography. The entire text is written in klon verse, in the same hand in all volumes, with extensive descriptions of places, characters and their emotions. Only volume 3 has red lacquered covers with small flower decorations. 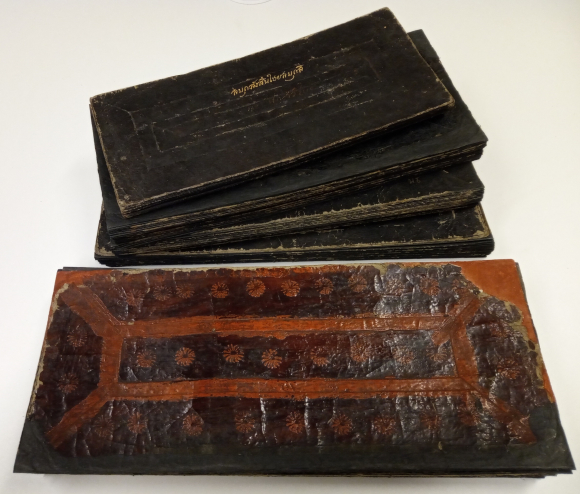 The provenance of the manuscript is partially known. Three volumes were acquired for the British Museum in January 1842 from Thomas Rodd, a London bookseller, as part of the collection of Scotsman Sir John MacGregor Murray (1745-1822, biographic details in this article).

Murray served in the British establishment in Bengal from 1770 to 1797 and was auditor general of Bengal. He never travelled to Burma, but his connection with Burma was through Dr Francis Buchanan who participated in an embassy to Amarapura in 1795 and published his observations  afterwards. On Murray’s request, Buchanan collected Burmese  and Thai manuscripts, with the assistance of a missionary resident in Ava, Father Vincentius Sangermano. Murray, a passionate collector and commissioner of mainly Persian and Arakanese manuscripts, brought his collection back to the UK when he returned from Bengal in 1797. After his death, Murray’s collection was split up: some manuscripts were purchased by the British Museum, others ended up in the India Office Library and the major part is now kept at the Staatsbibliothek zu Berlin in Germany. 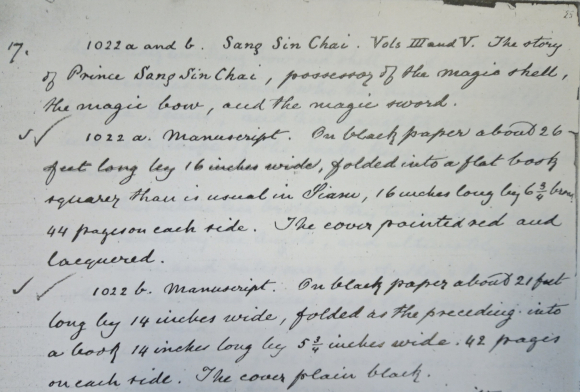 Henry Alabaster’s description of volumes 3 and 5 in a photocopy of a “Catalogue of Siamese manuscripts in the Library of Her Majesty’s India Office” [no place, no date].

A colophon in volume 1 (Add MS 12261) mentions that the text was compiled after the siege of the “Great City” (เมื่องไหย่) to preserve the original text that had been lost or destroyed. The phrase “siege of the Great City” is thought to refer to the destruction of Ayutthaya in 1767, and the scribe as well as the patrons may have been war captives taken from Ayutthaya to Ava. The anonymous scribe states that “this ancient Mon story” (นิยายมอนแตกอนมา original spelling) was written down from memory. Another colophon on f. 42 of the second volume mentions two grandparents, Ta Khong and Yai Mun (ตาคง ยายมูน), who commissioned this manuscript. And a colophon on the last folio of volume 3 records that this volume was completed on “Saturday, ninth month, [uposatha day before] the 3rd quarter moon, year of the rat” corresponding to 20 August 1791.

Colophon in the first volume mentioning the loss of the original text during the “siege of the Great City” (second line). British Library, Add MS 12261, f.2

The text tells the story of King Senakut and his younger sister Keson Sumontha, who was abducted by the giant Yak Kumphan. The pair later had a daughter, Sri Suphan, whom Yak Kumphan lost in a gamble to the king of serpents. Senakut, distraught by the kidnapping of his sister, set up a hermitage in the forest where he met seven beautiful maidens who became his consorts. Six of them gave birth to sons, but the seventh consort, Pathuma, and her attendant Kraison gave birth to two very special sons. Pathuma’s child, Sang Sinchai, was born in a conch shell and with an ivory bow, and Kraison’s son Sing had the shape of a mythical lion.

The six other jealous consorts plotted to convince the king that the two strange sons were a bad omen, so he banished them and their mothers from the city. Growing up in the forest, the boys acquired super-human skills in addition to powers they were born with. One day, the king ordered his other six sons to search for Keson Sumontha who he could not forget. Being cowards, they looked for Sang Sinchai and Sing and tricked them into joining the search for their aunt. Sang Sinchai located Keson Sumontha, but she told him about her daughter Sri Suphan who lived with the serpent king. Sang Sinchai and Sing rescued both women and brought them back to the other six brothers who pushed Sang Sinchai down a water hole before taking the women to King Senakut. However, Keson Sumontha left her scarf at the spot and vowed that should she ever get it back, it meant Sang Sinchai was still alive. 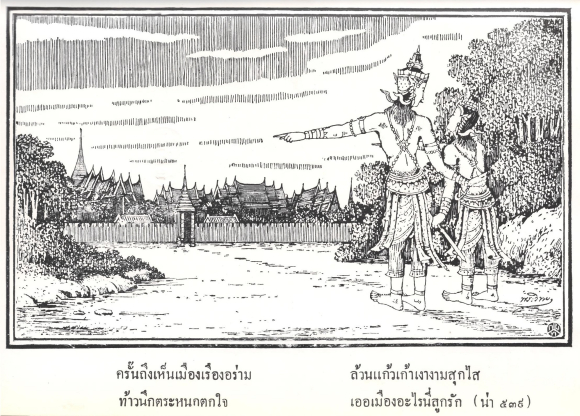 It is often assumed that Sang Sinchai is simply the Thai pronunciation of Sang Sinsai, a well-known work attributed to the 17th-century Lao scribe Pangkham. The Lao text is considered a masterpiece of Lao literature and is very popular across Laos thanks to the extensive research and publications of Maha Sila Viravong. He transcribed the story from palm leaf manuscripts for publication by the Kasuang Thammakan (1949) which formed the basis for numerous subsequent editions and translations into other languages. Lao Isan (Northeast Thai) and Thai versions of the story have been retold, researched and published by several Thai authors since the 1920s. 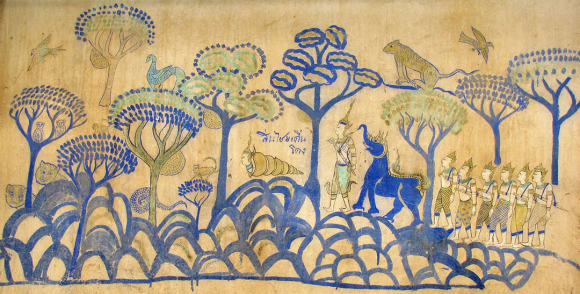 However, the Thai text of Sang Sinchai in this manuscript differs significantly from the Lao and Lao Isan versions, as it features some different characters, with different names and a storyline inspired by an ancient legend of the Mon ethnic group with the title Sangada. The motif of a boy born with a conch shell also appears in a Buddhist tale entitled Suvannasankha Jātaka (Golden Conch Birth Story) belonging to the corpus of Paññāsa Jātaka.

The verse novel Sang Sinchai is little known today, despite the fact that it once inspired Thai kings and princes - King Rama II, King Rama III and Prince Naritsaranuwattiwong - to write dramatised adaptations of the story in the 19th and early 20th century.

This article is an updated summary of “A Thai text of Sang Sinchai from the late Ayutthaya era” in Manuscript Cultures and Epigraphy of the Tai World, ed. Volker Grabowsky. Chiang Mai: Silkworm Books, 2022, pp. 225-254.

Posted by Annabel Gallop at 1:15 AM