The provenance histories of Batak manuscripts in the British Library (1): The British Museum collection to 1900

Provenance research is increasingly acknowledged as an essential part of the study of manuscripts, which was long dominated by a focus on the texts within.  More recently philological studies have increasingly been complemented by considerations of materiality, with an enhanced appreciation of materials, decorative elements, graphic layouts and paratextual elements.  Our understandings of writing cultures can be further enhanced by exploring the 'social life' of manuscripts (alluding to Arjun Appadurai's influential 1986 volume) and in particular the changing meanings of books through time and place as they were created, used, sold, seized, stolen, traded, discarded or treasured.

Following the digitisation of the complete collection of 37 Batak manuscripts in the British Library, in collaboration with CMSC Hamburg University, this series of three blog posts attempts to trace the complex journeys that each manuscript undertook, from north Sumatra to London.  The task is also important for scholarly reasons, for Batak manuscripts are never dated, and therefore the date of acquisition is often the only firm evidence towards dating the manuscript, providing at the very least a latest possible date for the writing of the book. This first part considers manuscripts from the collections of the British Museum up to 1900. The second installment looks at Batak manuscripts from the India Office Library and Records, which joined the British Library in 1982. The third and final part presents more recent aquisitions up to the present. 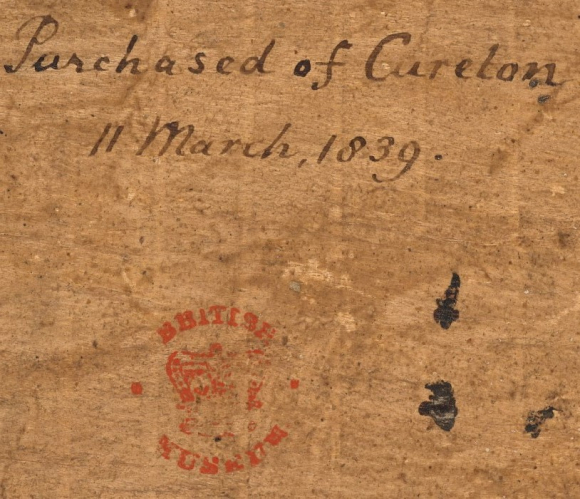 An important element of provenance research is understanding the system of shelfmarks or reference numbers used by libraries and museums, because often these offer clear indications of the likely date of acquisition. The British Museum was founded in 1753 through the bequest of Sir Hans Sloane, whose own manuscripts were assigned the shelfmarks 'Sloane MS 1-4100'.  Following the end of the Sloane sequence, subsequent manuscripts which entered the British Museum were given 'Additional' manuscript numbers, now abbreviated as 'Add', starting with Add MS 4101.  The first Batak manuscript to enter the British Museum, just a decade after its founding, was Add MS 4726, a pustaha or tree-bark book folded in concertina form, in Toba Batak script.  This is in fact the first known Batak manuscript to enter a European collection, and also gives us the earliest terminus ante quem or 'earliest latest date of writing' for any Batak manuscript (the complex formulation reflecting the difficulties of establishing chronological frameworks for Batak manuscripts). A black ink inscription on the first page identifies the donor: ‘Presented by Alexander Hall, Esq., 18 May 1764’.

Thanks to research by Ellen Filor (2014), Alexander Hall (1731/2-1764) can be identified as the youngest son of a Scottish aristocrat, James Hall, 2nd Baronet of Dunglass. Hall entered the East India Company in 1750 and was sent out as a factor or merchant to Fort Marlborough at Bengkulu (then called Bencoolen) on the west coast of Sumatra, and in 1753 was appointed assistant to the Resident at Natal, in Mandailing Batak territory. He is cited – in the context of a discussion of the cannibalism of the Bataks – in William Marsden’s History of Sumatra (1783, p. 303): ‘Mr. Alexander Hall made a charge in his public accounts of a sum paid to a raja as an inducement to him to spare a man whom he had seen preparing for a victim’. Hall returned to Britain in 1762 and unsuccessfully petitioned the Company to be transferred to Bengal. He departed again for India in 1763 and in September 1764 arrived back in Bengkulu, where he died two months later. As in May 1764 Hall would have been en route to Bengkulu, the Batak manuscript was probably brought to England in 1762, and then delivered to the British Museum either personally before he set sail again in 1763, or in 1764 by someone acting on his behalf. 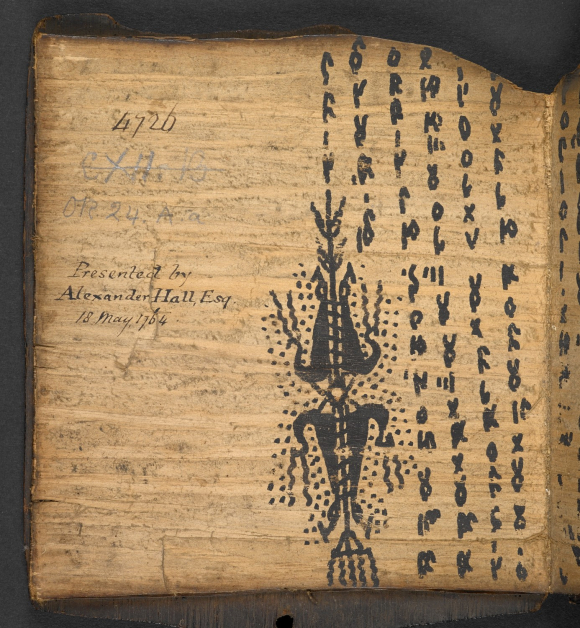 We have no information on how Alexander Hall acquired this manuscript. However, inscriptions on the book itself suggest an informed exchange enquiring into the contents of the book. On the first page is written with a European pen in Latin characters: ‘Ompoo Nee Ha ee doo punn / Harryen Soocoo nya / Punn ampoo Hee wrote this / Witness Raja Muntaggar’, which can be read in conjunction with the Batak text to understand that Ompu Ni Haidupan, of the clan Harean, wrote this panampuhi or text on the divination oracle through analysis of the cut slices of a lemon. 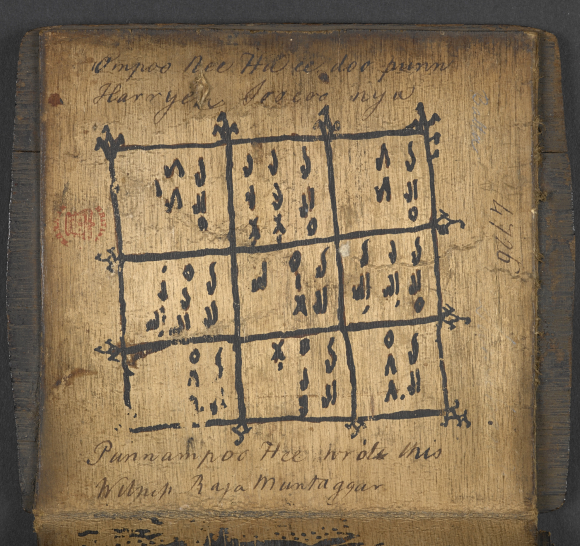 The next two Batak manuscripts to enter the British Museum were both purchased from dealers who were major suppliers to the Museum. Add 11546 was bought in 1839 from Harry (Henry) Osborne Cureton (1785-1858), a dealer in coins and antiquities based at 81 Aldersgate, Barbican, London (see illustration at the top of this post).  Add 15678 was acquired in 1846 from Joseph Lilly (1804-1870), a well-known London bookseller.  No further information is available on where or how these manuscripts ended up in London.

A substantial collection of eight pustaha, Add 19378 to Add 19385, was purchased from a Dr E.G. Latham in 1853. Latham had received them from Baron Oscar von Kessel, who had travelled in the southern regions of Batak country from Tobing via Sipirok in south Tapanuli to Sigompulon in 1844 as part of a survey expedition (see von Kessel, 1856). A further manuscript, Or 2445, sold to the British Museum by Dr E. G. Latham in 1881, evidently came from the same source. The connection between Dr Latham and Baron von Kessel is not known. 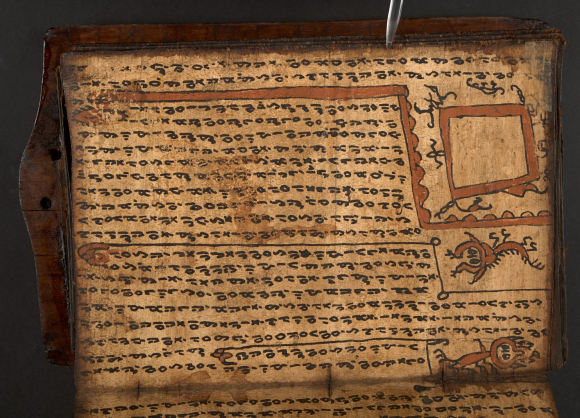 Or 5309 is a bamboo cylinder which was given to the British Museum by Lord Crawford in 1897. Ludovic Lindsay (1847-1913), 26th Earl of Crawford, inherited his father Lord Lindsay’s bibliophilia, including for Oriental manuscripts. Lord Lindsay had acquired a number of Batak pustaha from the sale of H.C. Millies in 1870, and Ludovic continued to seek out Batak and other Southeast Asian manuscripts. On 15 October 1897 he wrote to his librarian, instructing him to contact C.M. Pleyte at the booksellers Brill in Leiden, and: ‘Get all the Batak he [Pleyte] will let you have especially the Bamboo ones’ (Hodgson 2020: 1021). Is it therefore not rather surprising that Ludovic presented a bamboo Batak manuscript to the British Museum in this very year? The answer probably lies in its condition: Or 5309 is split in two halves. The placement of the old British Museum labels on the inside of the bamboo suggests that the manuscript was already broken when it arrived, and this is perhaps why Ludovic did not retain it in his collection, and instead donated it to the British Museum. 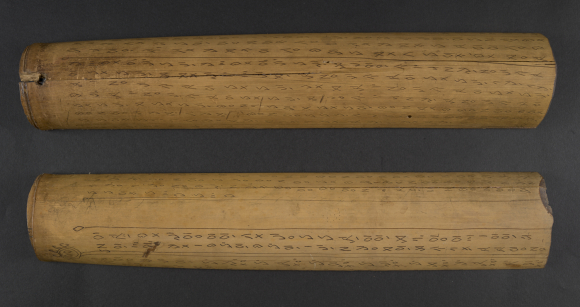 The next part of this blog will look at Batak manuscripts from the India Office Library collection.

Posted by Annabel Gallop at 3:39 PM