With the generous support of William and Judith Bollinger, 120 Javanese manuscripts in the British Library are being digitised. The manuscripts date from the 18th to the late 19th centuries, and cover a wide range of subjects, from Javanese literature, history and calendrical traditions to Islamic texts on theology, law and Sufism, and include some finely illuminated or illustrated volumes. A full list of the manuscripts to be digitised can be found here. On completion of this project by 2023, a great milestone will have been reached: all the Javanese manuscripts written on paper in the British Library will have been digitised, and will be freely and fully accessible online.

This project continues and complements the Javanese Manuscripts from Yogyakarta Digitisation Project (2017-2019), supported by Mr S.P. Lohia, which digitised 75 manuscripts originating from the Palace (Kraton) of Yogyakarta, which had been seized by British forces in 1812 and are now held in the British Library. In the present Bollinger Javanese Manuscripts Digitisation Project, the great majority of manuscripts to be digitised – over a hundred of the 120 – were also acquired during the British administration of Java from 1811 to 1816, and are thus substantially earlier than most other Javanese manuscripts held in libraries today. 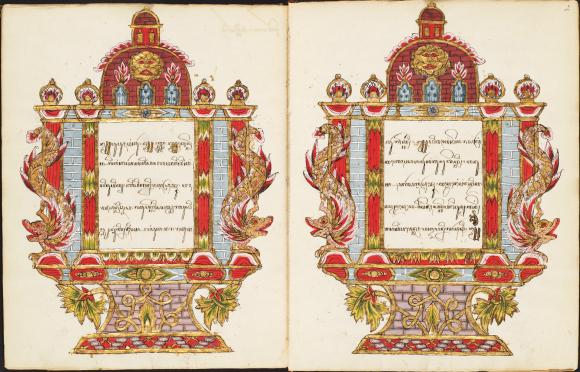 In this new digitisation project, 41 of the Javanese manuscripts are from the collection of John Crawfurd, who was Resident of Yogyakarta from 1811 to 1814. While these manuscripts are not from the Kraton library in Yogyakarta, many of them have royal connections through the Pakualaman, the minor court set up in Yogyakarta under British patronage in 1812 in return for support during the attack on the Sultan's palace. Crawfurd and Prince Paku Alam I enjoyed warm relations founded on a shared interest in Javanese literature and history. The Pakualaman court became renowned as an artistic centre, and many of the manuscripts presented to Crawfurd by Paku Alam are illuminated in the characteristic candi or ‘temple’ style, with decorated frames (wadana) in the form of distinctly architectural constructs, as shown above (Behrend 2005; Saktimulya 2016).

Another British official with an interest in Javanese history was Colin Mackenzie, Chief Engineer in Java from 1811 to 1813, and 43 manuscripts to be digitised in this project come from the Mackenzie collection. In contrast to the Crawfurd collection, which mostly comprises manuscripts from Yogyakarta, a considerable number of manuscripts owned by Mackenzie originate from other regions of Java including the pasisir, the northern coastal strip. Mackenzie received manuscripts from Kudus and Rembang (MSS Jav 90, 99), from the Adipati of Gresik (MSS Jav 12), and from the son of the Panembahan of Sumenep in Madura (MSS Jav 25, 31). Five of Mackenzie’s manuscripts came from Kyai Adipati Sura Adimanggala, the erudite Regent of Semarang (MSS Jav 1, 2, 3, 18, 67), including a divination almanac, Papakem Watugunung, dated 1812 (MSS Jav 67), written and illustrated by Sura Adimanggala himself. 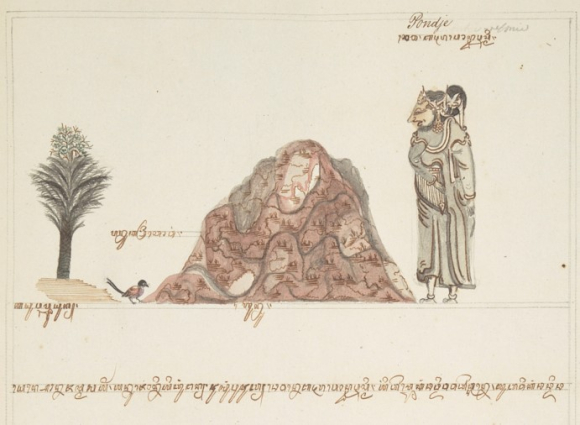 Papakem Watugunung, with illustrations of attributes of each of the thirty wuku or weeks, written and illustrated by Kyai Adipati Sura Adimanggala of Semarang, 1812. British Library, MSS Jav 67, f. 38r

From the Dutch official F.J. Rothenbuhler, former Governor (Gezaghebber) of the Eastern Coast of Java, based in Surabaya, Mackenzie received two of the finest early illustrated Javanese manuscripts known, which appear to have been commissioned by Rothenbuhler’s wife, named in the text as Nyonya Sakeber (i.e. Gezaghebber). Serat Sela Rasa (MSS Jav 28), copied in 1804, was one of the first Javanese manuscripts in the British Library to be digitised, since when its wayang-style drawings have attracted wide attention and adorned numerous book covers published internationally. Much less known is its equally lavishly illustrated sister manuscript, Panji Jaya Kusuma (MSS Jav 68), but its planned digitisation will bring this beautiful manuscript too into the limelight, and is certainly one of the highlights of the project. 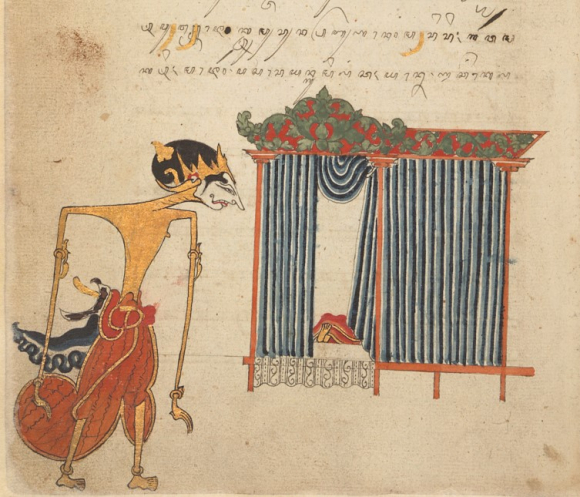 Prince Dewakusuma (father of Panji) entering his wife's bed-chamber; her presence is only hinted at, tantalizingly, by her foot peeping out from under the bed-covers. Panji Jaya Kusuma, Surabaya, 1805. British Library, MSS Jav 68, f. 24v

The Mackenzie collection is also rich in Islamic works, written in Javanese in both Javanese script (hanacaraka) and modified Arabic script (pegon). Manuscripts may include texts in Arabic, in some cases with interlinear translations in Javanese. Subjects range from stories of Islamic saints and heroes such as Anbiya (MSS Jav 51) and Carita satus (MSS Jav 73), texts on mysticism and prayer, and Sufi silsilah or chains of transmission of teachings, as well as compilations of prayers and vows. There are also a number of primbon, compendia of religious teachings combined with divination guides, mantras and protective prayers. 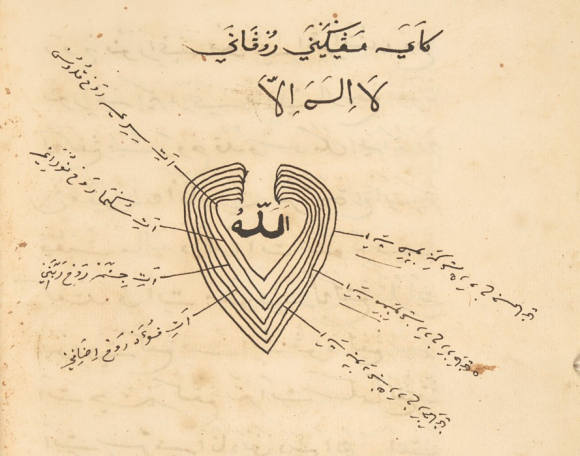 The manuscripts to be digitised also include 13 from the collection of Raffles, comprising fragments of literary works, copies of Old Javanese inscriptions, and notes on language. Raffles, Mackenzie and Crawfurd all collected manuscripts in order to support their researches. In their publications – such as Raffles’ History of Java (1817) and Crawfurd’s Grammar and Dictionary of the Malay language (1852) and his Descriptive Dictionary of the Indian Islands and Adjacent Countries (1856) – references to the manuscripts in their own collections can be traced, but many other ‘works in progress’ remained unpublished. Mackenzie never published anything of substance arising out of his Javanese collections, while among Crawfurd’s manuscripts to be digitised are three volumes of materials for a planned grammar and dictionary of Javanese which never fully materialised. 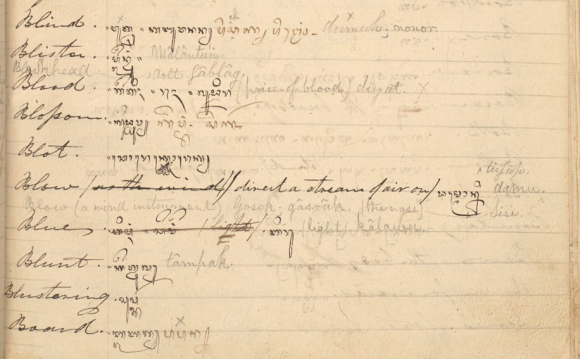 A glimpse of an English-Javanese dictionary compiled by John Crawfurd, before 1851. British Library, Add 18577, f. 123r

The Bollinger Javanese Manuscripts Digitisation Project will also digitise around 17 manuscripts mostly dating from the second half of the 19th century, comprising more recent acquisitions in the British Library. These include an illustrated volume of Panji stories, probably from the north coast of Java, a collection of drawings of wayang figures, and a number of Islamic texts copied on local treebark paper (dluwang), most likely from an educational (pesantren) milieu. 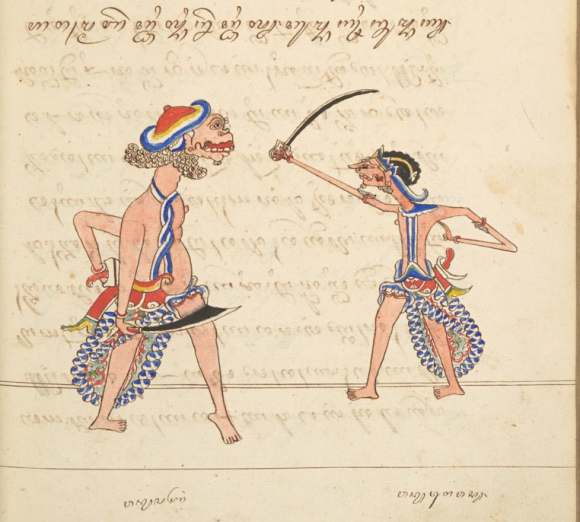 A foreign Balinese soldier confronting Urawan, who is actually Panji's wife in male disguise; an illustration from a Panji romance, 1861. British Library, Or 15026, f. 69r

Over the coming year, the British Library will be working with partners in Indonesia, especially with the National Library of Indonesia (Perpustakaan Nasional Republik Indonesia or Perpusnas), the very active Indonesian Association of Manuscript Scholars MANASSA, and DREAMSEA (Digital Repository of Endangered and Affected Manuscripts in Southeast Asia), to broaden awareness and usage of these new resources, including through a conference to be held in Indonesia.  Selected newly-digitised Javanese manuscripts from the British Library will also be transliterated in cooperation with the Lestari Literary Foundation (Yayasan Sastra Lestari) and will be made accessible through the pioneering portal for Javanese literature, Sastra Jawa.

All the manuscripts to be digitised over the coming year through the Bollinger Javanese Manuscripts Digitisation Project are listed on the Digital Access to Javanese Manuscripts page. As each manuscript becomes accessible, the shelfmark will be hyperlinked directly to the digitised images. This post has highlighted some of the most interesting and beautiful manuscripts which will soon be available online to be read in full – or even just to be gazed at and enjoyed as a visual feast.