More highlights from our GOLD exhibition

Gold is a new exhibition at the British Library in London which opened last week, presenting 50 spectacular manuscripts from around the world. The exhibits are drawn equally from the Western heritage and the Asian and African collections of the British Library, and feature both iconic manuscripts, familiar from publications and previous exhibitions, and a few treasures never previously displayed in public. A recent Medieval manuscripts blog presented some of the highlights of the Gold exhibition; here are more delights, from an exhibition in which every item is a star in its own right.

The exhibition opens with a selection of sacred texts from different world faiths written entirely in gold. This lavishly decorated scroll of the Lotus Sutra, copied in 1636 in gold and silver ink on indigo-dyed paper, was probably commissioned by the Japanese emperor Go-Mizunoo (1596–1680) for presentation to the Toshogu Shrine in Nikko where his grandfather-in-law, the Shogun Tokugawa Ieyasu, was buried. The Lotus Sutra is one of the most influential scriptures of the Mahayana school of Buddhism in East Asia, and is seen by many as the summation of the Buddha’s teachings. At the start of the scroll is an exquisite illustration of the Buddha granting promises to his disciples that they may attain Buddhahood in their future lives, but in the exhibition we have chosen to focus attention on the sacred text itself, beautifully written in gold. 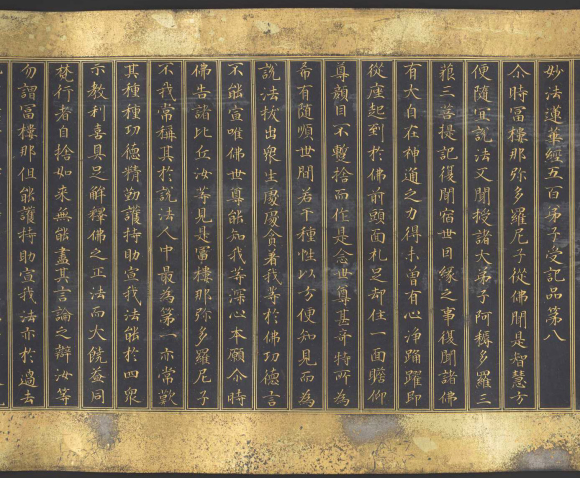 The exhibition proceeds from sacred texts written in gold to secular documents where gold ink served to honour and elevate royal names. The Sahasras (Thousand Delights), a collection of 1004 songs written in Braj Bhasha, a dialect of Hindi, was compiled for the Mughal emperor Shah Jahan (reigned 1628–58) by the master musician Nayak Bakhshu. This illuminated copy was probably made for the Emperor himself, and the names of the original patrons of the songs were replaced on every page by the royal name ‘Shah Jahan’ written in gold, as can be seen on the penultimate lines of the opening page below. 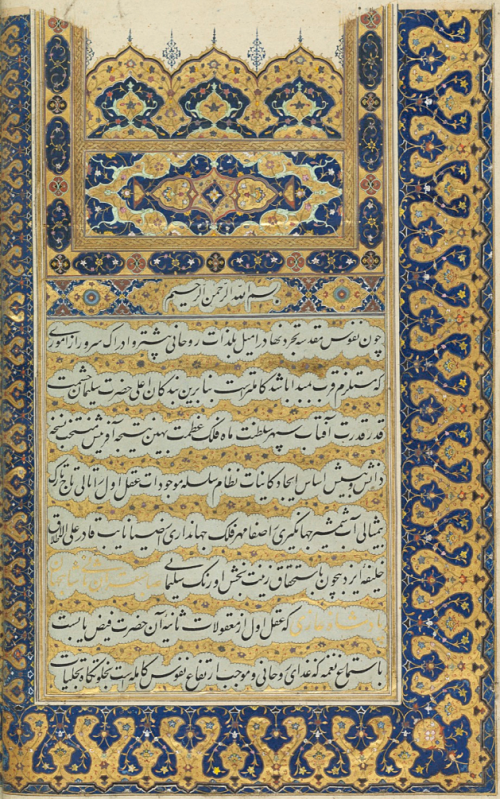 The use of gold for the sovereign name features in a work about the Holy Land by the French author Martin de Brion, two copies of which were produced as gifts to the rival kings, Henry VIII of England and Francis I of France. On display is Henry’s copy, which opens with his royal arms framed by a border, two fleurs-de-lis and two crowned ‘H’ initials in gold. Facing this is a dedication poem to Henry, splendidly written in gold ink on a red ground, alluding to the heraldic colours of England. 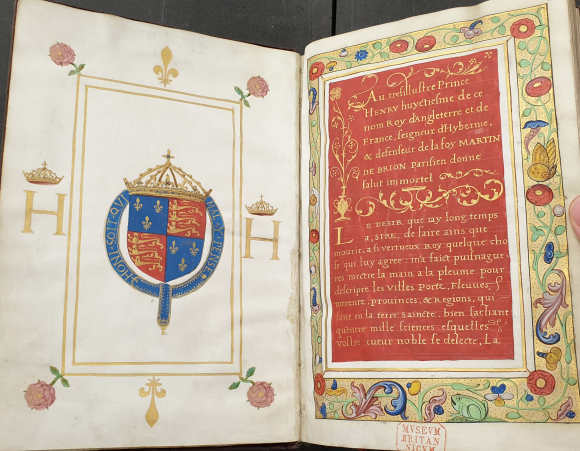 The exhibition also explores the use of gold in pictures to depict sacred figures and evoke divinity. The Bhagavata Purana, one of the most influential scriptures in the Vaishnava tradition of Hinduism, contains stories of the various manifestations of the God Vishnu. Prominently positioned at the start of this scroll is the sacred mystic syllable Om, written in gold, followed by an image of the God Ganesh. 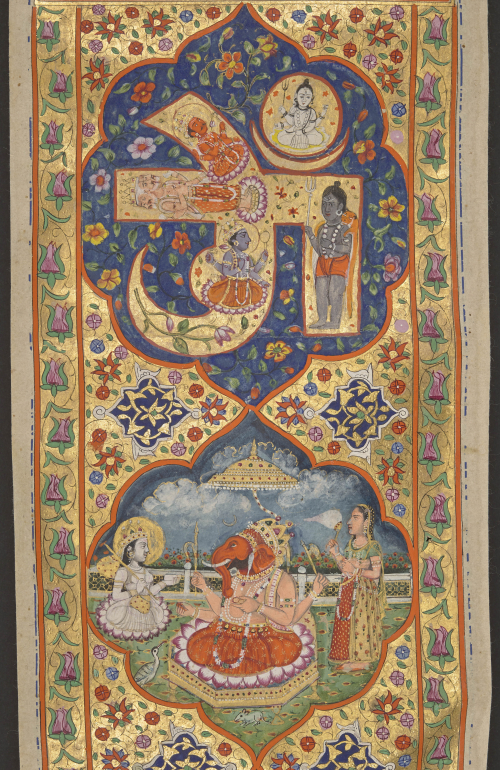 Lives of the Buddha

Before gaining Enlightenment, the Bodhisatta (or Buddha-to-be) had hundreds of lives, in which he was born as man and animal in many different forms. In a Burmese manuscript, gold is used to identify the Bodhisatta in various Jatakas, or stories of his lives. In one story, the Bodhisatta is born as an elephant, whose herd is terrorised by a giant crab who lives in the nearby lake. The crab manages to seize him in his claws and a heart-stopping battle ensues. Only when the elephant's mate coaxes the crab with flattering words does it loosen its death-grip. This story praises the virtue of loyal partners. 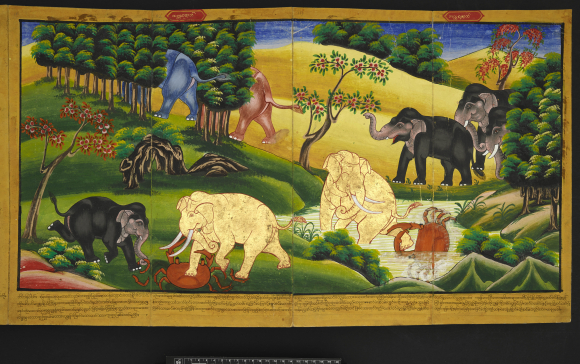 A lacquered and gilded Thai book cover, which depicts animals and plants in the heavenly Himavanta forest of the Buddhist cosmos, was created using a Thai technique called lai rot nam (design washed with water). Thick mulberry paper was covered with layers of black lacquer, a pattern was traced, areas to remain black were painted with a natural gum, and gold leaf was applied to the whole surface. The next day the gum was removed with water to reveal the intricate gold design.

The most prestigious sacred Christian manuscripts were sometimes fitted with treasure bindings of precious metalwork, and displayed prominently in churches. Although the ornate binding of this Gospel-book is probably not contemporary with the manuscript, at least some of the components are medieval. The cover of copper-gilt (copper overlaid with a thin layer of gold leaf) is ornamented with a relief figure of Christ in the centre, surrounded by four enamel plaques and a border of crystals. 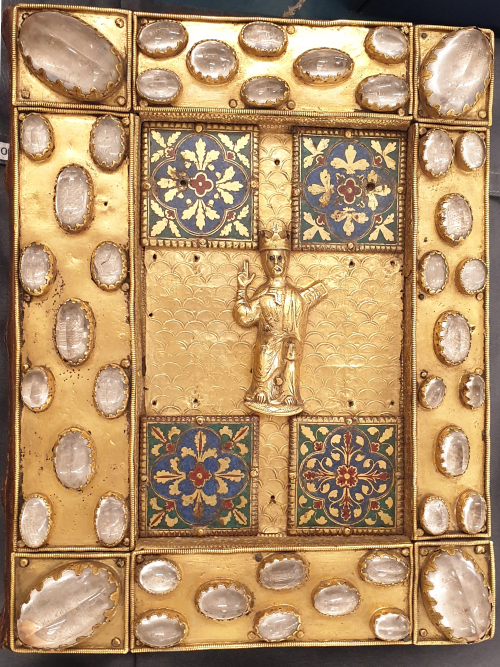 The Art Déco style of the 1920s is exemplified by the lively style, fine craftsmanship and the rich materials of this binding, created by Pierre-Émile Legrain (1889– 1929). His innovative and creative designs incorporated geometric and abstract patterns, featuring semicircles of gold with overlapping blue and silver circular motifs on goatskin. This binding is the most recent item in the exhibition, which spans 1,500 years of writing traditions. 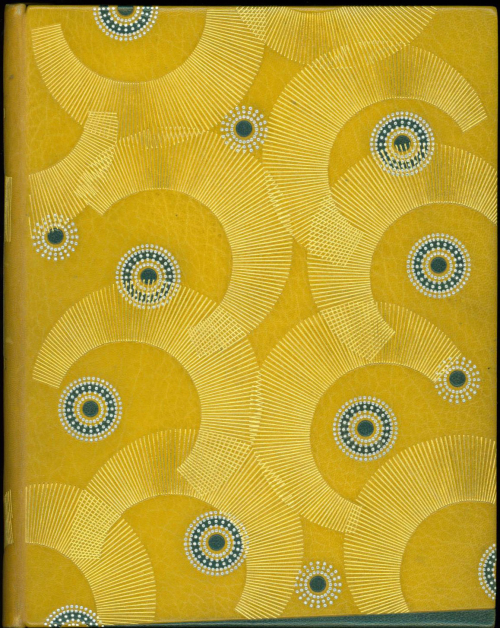 Posted by Annabel Gallop at 1:59 AM