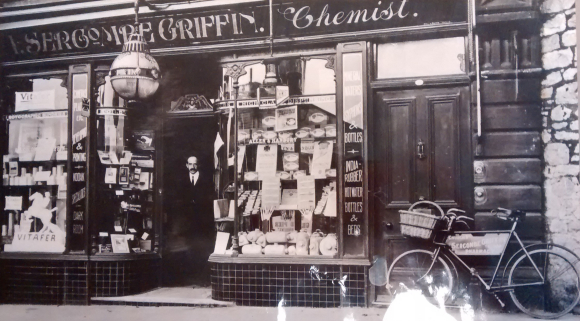 Griffin in the doorway of his Weston-super-Mare pharmacy after his return from Burma. Griffin family archives.

The Burmese collection at the British Library has recently received two donations of fascinating memorabilia that belonged to Alfred Sercombe Griffin. He is known for his adventure novels for boys, but made his main living as a pharmacist. He described himself as a “nomadic chemist”, and was drawn to work as a locum pharmacist around England and in other parts of the world. In 1906 he accepted a post at the English pharmacy in Rangoon. As a result, many of his adventure novels are set in Burma. He also wrote extensively of his work as a pharmacist in Burma in the Chemist & Druggist and the Pharmaceutical Journal.

He writes in “Avoiding the humdrum”, Pharmaceutical Journal, 1925, under the pen name “Sasayah” (Burmese for writer): “My father spent the greater part of forty-five years within a small chemist’s shop, looking out on a dull grey wall. I was apprenticed to him, and early vowed that such an existence should not be mine, though I might be a chemist and I might be poor.” 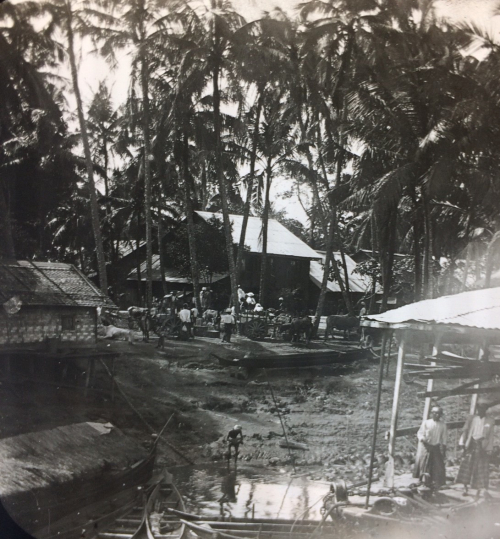 Born in Bath and apprenticed by his father, Alfred Sercombe Griffin moved from Bournemouth to London and on to San Remo in 1904-05. After returning to England and working as a locum pharmacist in many parts of the country, he applied for posts in Uganda and China but was not successful. He then found an advertisement for a vacant position in the Supplement of the Pharmaceutical Journal, and was accepted for the post at the pharmacy of Mesrrs. E.M. de Souza & Co., Dalhousie Street, Rangoon, where he arrived in December 1906 after a long boat journey. 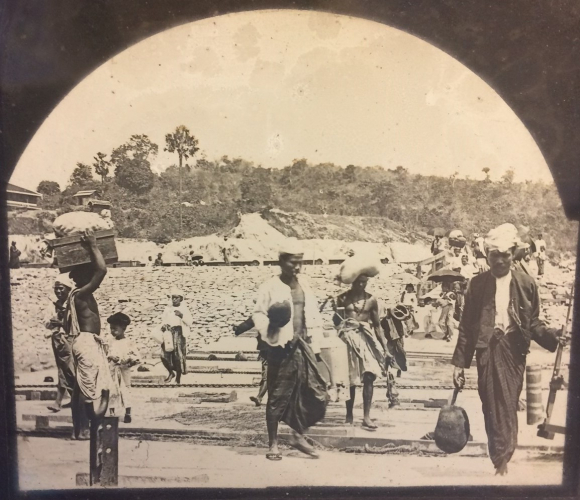 He writes in one of his novels, Burma Road Calling! (1943): “An intensely varied crowd surged along the road for the early morning shopping and promenade: Burmese women gay in pink silks with the daintiest replicas of themselves beside them; shaven-headed monks in yellow robes, bearing golden sunshades; sturdy Shans with enormous plantain-leaf hats from the hills; tall Paloungs with black robes and tight skull-caps who had brought tea from over the border; an English soldier or two from the barracks; Chinamen in blue pantaloons; Kachins of wild appearance, Karens of gentler aspect; and half a dozen races that even Mr Wrekin himself could not identify. ‘Just come from Babel?’ inquired Roger as he listened to the many languages being spoken all round him.”

In "Avoiding the humdrum" Griffin gives a similar description of his work place: “In the pharmacy in Rangoon fifty languages were spoken everyday; my dispensers and assistants were Burmese, Chinese, Goanese, Hindoos, Brahmins, and Eurasians…”  Griffin aimed to avoid the English circles with its bridge parties and English plays that he found rather boring, and much preferred a Burmese pwai instead, sitting leisurely on a mat and passing down a betel box to chew. He however also describes in the letters to his family Friday evenings and parties at the Rangoon YMCA. Griffin was also involved with the Boys’ Brigade (or new Scouts) and attended their camp at Kokine (Rangoon) in 1907. He was also part of the Boys’ Work Committee. Two of his adventure novels, The Scouts of Ching’s Island and Scouts in the Shan Jungle are about boy scouts based in Rangoon and lodging at the YMCA (“Ching’s Island” was located at Kokine Lake). Griffin clearly enjoyed similar literature himself, as he asked for the Boy’s Own Paper to be sent regularly to him from England. Later on he would write stories for the paper himself. 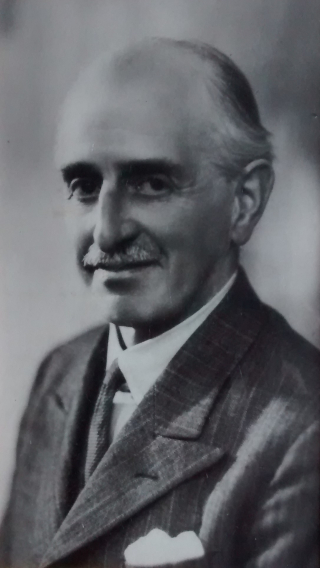 Griffin was soon appointed the manager of the dispensing department, but like many British in Southeast Asia at this time soon fell gravely ill (with dysentery or malaria). In late 1907 he was sent to the branch in Maymyo, Shan States, to recuperate. With a more temperate climate than Rangoon, Maymyo was a favourite hill station for the British. Griffin used his own experiences in Burma to provide colour and detail to his adventure stories, and even the Maymyo pharmacy features in one of them: “Roger went up the steps and passed into a marble-floored pharmacy which had rows of medicine bottles, glass show-cases, and a smiling young Englishman behind the counter.” (Burma Road Calling!, 1943).

Griffin (with his Burmese name Maung Na Gyi) journeyed back to England in late 1908 due to his health, and was apparently banned from returning to the Tropics on medical grounds, which he greatly lamented. From his many writings it becomes clear that he sincerely loved his time in Burma and had a soft spot not just for the Burmese, but also for the variety of people who inhabited the country at this time. Despite staying in Burma for only  two years, one of them while very ill, the experience left a lasting impression on him, which he revisited via his writings in pharmaceutical journals, illustrated lectures, and adventure stories, published decades later.

After returning to Europe Griffin continued work as a locum pharmacist in Paris, but returned to Bath to take care of his father’s pharmacy in 1910. A few years later, he took over a bankrupt pharmacy in Weston-super-Mare, which he transformed into a thriving business, and then married and settled down there. In 1917 he built a bungalow in Sidcot, Winscombe, named Wingaba (according to Griffin Burmese for a beautiful view). He retired to Sidcot in 1925 early at 47 due to his poor health. He became a Quaker in the early 30s and subsequently travelled to Palestine, where one of his novels is set (Where the Master Lived, 1936).

Griffin writes in “Avoiding the humdrum” (1925): “In the duller days when I was to become a proprietor of a pharmacy of my very own I could jump out of the humdrum of income-tax returns and N.H.I. by picking up one of my books on Burma and fly instanter to a land of brilliant sunshine and kindly memories.” 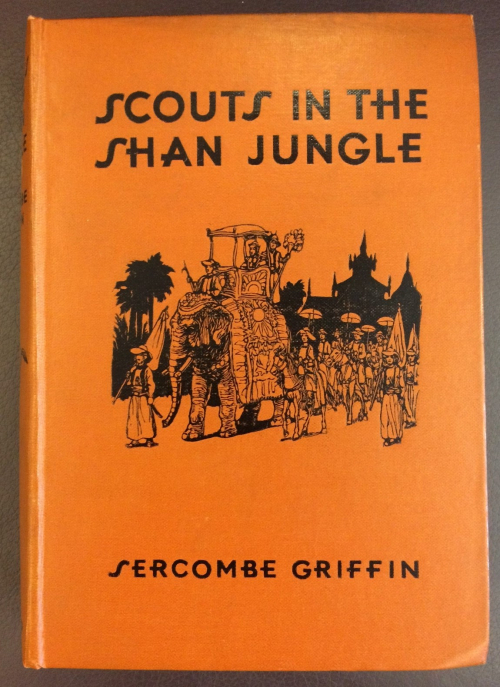 Griffin’s novels are light, entertaining stories of adventure replete with snakes and man-eating tigers, kidnappings, rides through waterfalls, lost cities, mystery and intrigue as well as a varied collection of personalities. The international group of Scouts that also includes Burmese, Shan, Indian and Chinese members nevertheless dress in khaki breeches and sun-helmets, and never miss their coffee and rolls in the morning, a tiffin and a siesta in the afternoon, and a wholesome dinner in the evening. Inevitably, the stories are written from an English perspective, and enjoy the stereotypes of the time, whether European or Asian. All of Griffin’s writings, however, relay an enjoyment of travel, wonder and humour in the small moments of life, as well as the joy of telling a story. The stress is firmly on the character of the individual.

Griffin’s interest in illnesses and their cure has also been included in the stories. Leprosy features in several novels, where a knee-jerk fear of contagion is dismissed with new medical knowledge. Snake bites can be dealt with the right treatment and some characters even catch malaria and recover. 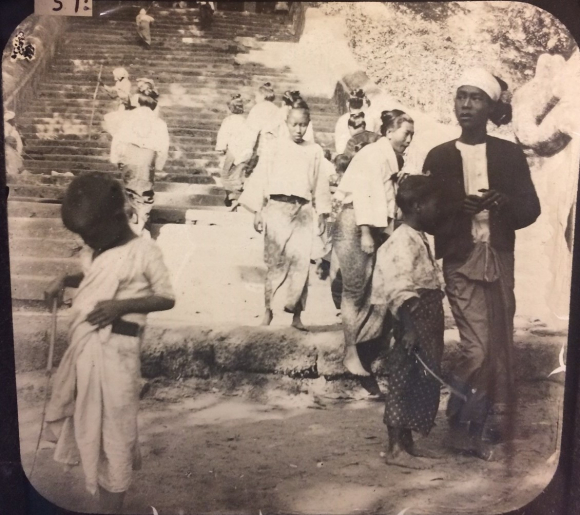 The two donations that the British Library has received were given by Michael Bruce, the maternal grandson of Alfred Sercombe Griffin, and a traveller and an author himself (Malta: A Geographical Monograph, 1965). The donations include a box of 50 photographic glass slides that Griffin took and collected while in Burma. Once back in Europe, he would give illustrated 'lantern lectures' of his travels with these slides. This lecture is still included with the glass slides and the numerous times the lecture was given between 1910-1941 are recorded on the inside lid (33 times altogether). Some of these slides were used as a basis for illustrations in Griffin’s novels.

Medical prescription in Burmese inscribed for Alfred Sercombe Griffin in Maymyo in 1907. Photograph by Michael Bruce. British Library, Or 17020.

The second donation is a framed palm-leaf prescription with the cure for “tropical sprue”, custom-made for Griffin while he was recuperating in Maymyo. He received it from a young monk who resided in the temple across the road from Griffin’s pharmacy, which he visited, with the aid of his walking sticks, for Burmese lessons. The prescription was given to him in return for a picture of the Shwedagon Pagoda that Griffin had found at the back of a pharmaceutical catalogue. Griffin describes watching the inscription being made, and indeed one of his glass slides depicts the young monk in question. A description of the process can also be found in Burma Road Calling!: “Roger was particularly interested in the monastery scribe who was making the holy books – from start to finish.” “First there were dried strips of palm leaf, eighteen inches long by two and a half inches deep, stretched taut on a special sort of frame. On this dried leaf the words were slowly inscribed with an instrument like a knitting-needle; letter by letter in the round script of the Burmese alphabet the young monk cut into the outer tissue of the palm leaf.” 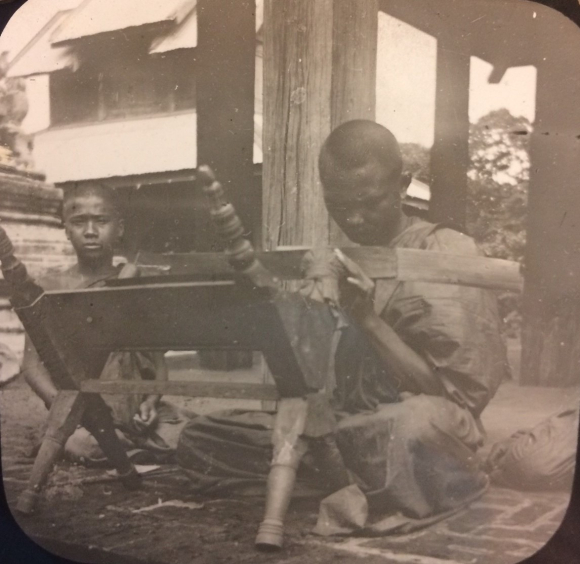 Griffin framed the prescription and wrote about it in the Druggist & Chemist and other medical papers, trying to find help in translating it. Apparently a portion reads: “Take the leaves of the Juju tree, plucked at midnight when Mars is in the ascendant. Pound them intimately with the dried tail of a rat and the sting of a cobra…” The inscription is undeciphered as of today and is still awaiting translation. 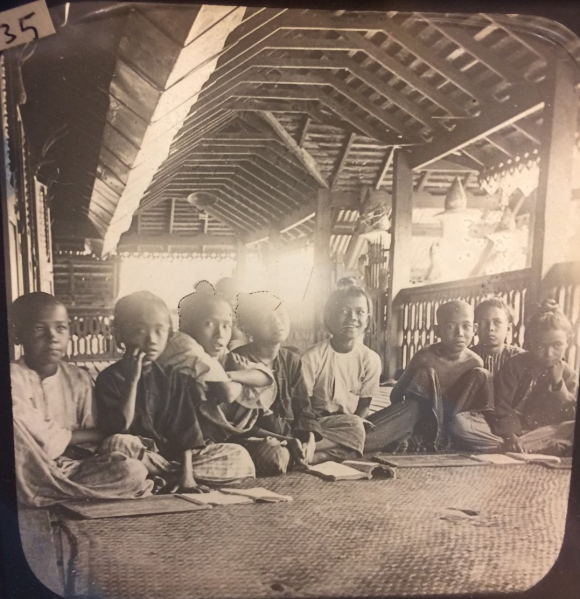 Bibliography of Alfred Sercombe Griffin’s monographs:
The Scouts of Ching’s Island, 1929. Set in Kokine (Rangoon), with the Kemendeen Scouts.
The Treasure of Gems, 1934. Set in 16th century Martaban and Pegu, where an English boy Roger ends up in King Tabinshweti’s court.
Fetters of Freedom, 1934
Within the Golden Globe, 1934
The Crimson Caterpillar, 1935
Where the Master Lived, 1936
Scouts in the Shan Jungle, 1937. Kemendeen Scouts’ adventures in the Shan States.
Burma Road Calling!, 1943. A journey from Rangoon to Chungking during the second Sino-Japanese War.

This blog was written courtesy of Michael Bruce and Christopher Griffin (both grandsons of Alfred Sercombe Griffin), who generously provided information, articles, letters and photographs from the family archives.