How Javanese manuscripts were actually produced is still largely a puzzle, and therefore it is important to describe manuscripts in a way that can shed light on this issue. Comparing manuscripts is also crucial to discover whether manuscripts might be related through their scribes, or in terms of other codicological aspects such as their illustrations, illuminations and bindings.

The start of many manuscripts from Central Java from the royal palaces and from other affluent owners often comprises two facing pages with highly intricate illuminations around a text block that is much smaller than that found in the rest of the manuscript. These illuminations, usually called wadana renggan in Javanese, are hard to interpret for someone not truly versed in Javanese literature and culture. It is generally thought that these illuminated frames are unrelated to the content of the manuscript, but this supposition is often wrong, as may be seen from the work of Sri Ratna Saktimulya from Yogyakarta who has dealt with this issue in many of her publications, most notably in her book on the manuscripts made during the reign of Paku Alam II (1830-1858) of the Pakualaman court in Yogyakarta (Saktimulya 2016).

It appears to be the case that when illumination was planned, the text was usually written first, after which an artist provided the illuminations, with or without consulting the scribe of the manuscript (Van der Meij 2017: 81). In many cases, however, illuminated frames were not added, for whatever reason, and the wide space set aside for the illumination around the text was left blank, as can be seen in the manuscript of the Sĕrat Asmarasupi (MSS Jav 26), written in AJ 1695/AD 1769, shown below. 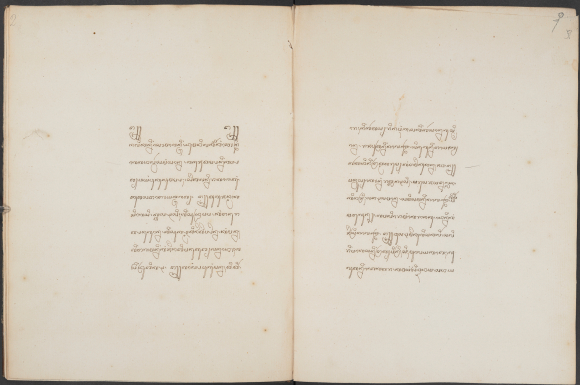 Two initial pages with blank borders which have not been illuminated in Sĕrat Asmarasupi, 1769. British Library, MSS Jav 26, ff. 6v-7r

Often in Javanese manuscripts the text on the illuminated pages starts with a colophon, which states when the manuscript was made and by whom, or other information the scribe felt the need to tell, such as his emotional state of mind when he or she started writing. The poetic text often also starts on these pages, and then continues without any interruption on the reverse of the page that follows the illuminated one, in the same hand. A typical example is shown below, in a manuscript from the collection of John Crawfurd, British Resident of Yogyakarta, containing legendary tales, Add MS 12300 (Ricklefs, Voorhoeve and Gallop 2014: 47 ). 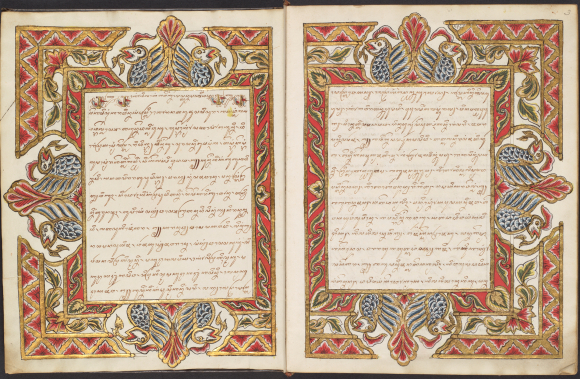 In this manuscript the text on the first page following the illuminations continues seamlessly, without interruption or repetition, from the text within the wadana. British Library, Add MS 12300, f. 3v

Below we will have a look at three Javanese manuscripts from the early 19th century, which have all been recently digitised through the Javanese Manuscripts from Yogyakarta digitisation project. They are Add MS 12281 of the Sĕrat Panji Angronang Pakualaman, also called Sĕrat Jaya Lĕngkara, written in AJ 1741 (AD 1813); Add MS 12288 of the Babad Sultanan utawi Mangkunĕgaran [Mangkubumen?] (undated); and Add MS 12302 of the Sĕrat Rĕjunawijaya, written in AJ 1729 (AD 1801) (Ricklefs, Voorhoeve and Gallop 2014: 45-47). 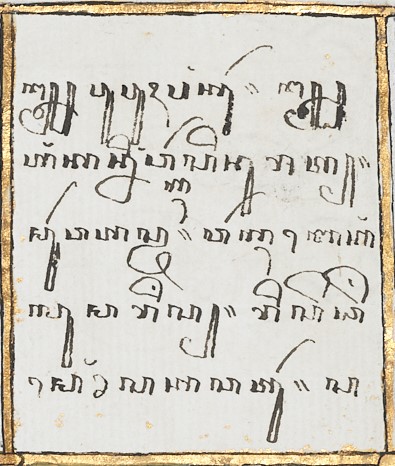 However, in all three manuscripts the illuminated frames contain the exact same text that starts on the subsequent pages. Add MS 12288 contains the first stanza of the first canto written in the long poetic meter Dhangdhanggula, while Add MS 12281 contains the first two stanzas of the first canto of the text in the short poetic meter Mijil. Because the poetic metre Mijil does not have many lines, Add MS 12281 needed two stanzas, as otherwise there would not have been enough text to fill the two illuminated frames. Add MS 12302 has two stanzas in another short metre, Pangkur, as otherwise both text blocks would not have been filled. However, in this manuscript the start of the text after the illuminated pages skips the first stanza that is included in the first illuminated page. In all three manuscripts the text blocks are completely filled with text, which means that the scribe knew exactly how large his letters should be in order to fill the space available precisely. It is also clear that the writing is by the same hand in all three manuscripts, but the scribe used a different pen for each. 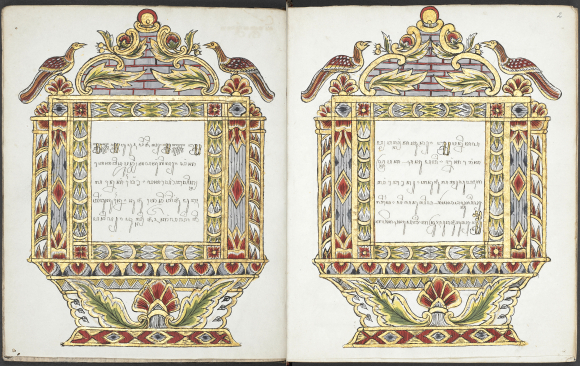 The start of the actual text after the illuminated pages in Sĕrat Panji Angronang Pakualaman, in a cursive forward-sloping hand. British Library, Add MS 12281, f. 3r 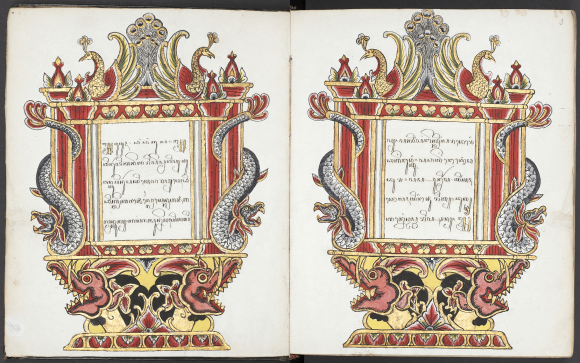 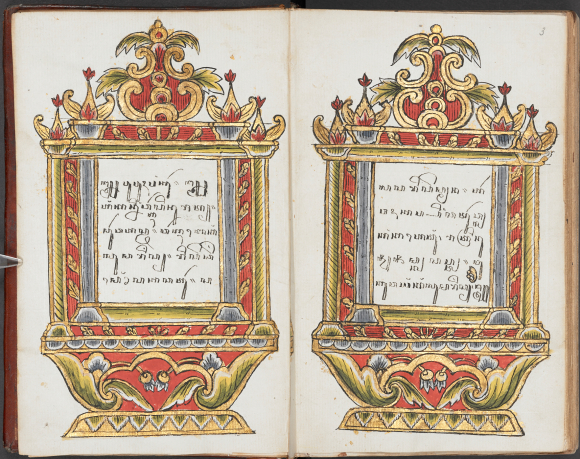 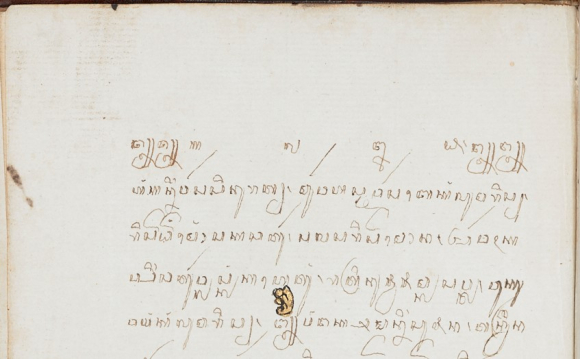 The start of the actual text of Sĕrat Rĕjunawijaya after the illuminated pages. While the illuminated pages open with the indication of the poetic meter that starts the text, Pangkur, this page starts with the Javanese numerals '1 7 2 8' indicating the year 1728 (as stated in the first line: angkaning warsa sinurat, ‘number of the year of writing’) in the Javanese calendar which is equivalent to AD 1801, and omits the indication of the poetic meter. British Library, Add MS 12302, f. 5v

As can be seen in the illustrations above, in all three manuscripts, the illuminator has added one small golden leaf-shaped ornament on the stanza divider at the end of the text within the illuminated frames, and has marked the identical spot on the first subsequent page of text with a golden leaf on the stanza divider as well. This is possibly to denote to the reader/singer that after having read/sung the text from the illuminated pages, he/she should subsequently continue at the small golden ornament on the following page to avoid repetition of the text. 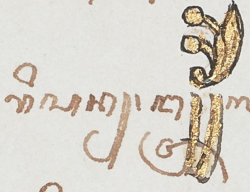 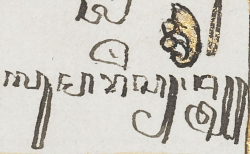 In the three manuscripts discussed above it is clear that, as happens frequently in Javanese paper manuscrips, pages were left empty at the start of the writing process. This is usually done to avoid text being lost because the opening pages are most prone to damage, and in this case probably also to allow illuminated pages to be executed later. Why this was done in this peculiar way in these manuscripts remains unclear, but the study of many more of these illuminations may shed further light on the writing and illuminating practices of manuscripts in Java.

Posted by Annabel Gallop at 1:29 AM