This guest blog post is by Sarbajit Mitra, a doctoral candidate at the School of Oriental and African Studies (London), who is working on his thesis: Cultures of Consumption: Popular Responses to Intoxicants in Colonial Bengal.

The celebrated Indian filmmaker Satyajit Ray visited the India Office Library (now part of the British Library) in 1976 to consult original 19th century Murshidabad and Lucknow paintings that would influence the set and costume design of his first Hindi language film Shatranj ke Khilari (The Chess Players), which was released the following year. Ray adapted his film from a short story by the noted Hindi writer Munshi Premchand (1880-1936). The story focused on two Awadhi noblemen addicted to the game of chess while totally oblivious to the political situation taking place that year of 1856, when the East India Company took over the administration of the province of Awadh by deposing the provincial King of Awadh, Nawab Wajid Ali Shah (1822-1887). The novel though just had one line that gave a sense of the historical background of the period while the two men continued their game.  In the script, Ray added a parallel narrative which looked at the  transfer of power to the Company from the perspective of Nawab Wajid Ali Shah and Sir James Outram (1803-1863), the then English resident at Lucknow . The film, thus, demanded painstaking research not just to be truthful to historical facts, but also for authentically recreating the period on screen. Ray, who was always known for his keen eye to details, devoted almost an entire year to research and in writing the script. Alongside referring to available primary accounts, Ray needed to find visual references from the period. The search for the appropriate visual references took Ray to different archives and repositories, including the India Office Library in London. This blog post will discuss the specific works of art that Ray consulted and ultimately influenced the set and costume design of Shatranj ke Khilari.

The Satyajit Ray Society in Kolkata, based in the filmmakers’ former residence, holds his extensive archives and shooting notebooks, the later is available on open access. Ray used handmade exercise books with distinct red cover, popularly referred to as Kheror Khata (traditionally used by the account-keepers in Bengal) for keeping his notes. Ray’s Kheror Khatas are invaluable resources providing step by step information on how he conceived and gave shape to his ideas before they were translated on the screen. The research notes, early drafts, even the shooting schedule for Shatranj ke Khilari can be found in the Kheror Khata for the film, spread across two volumes. 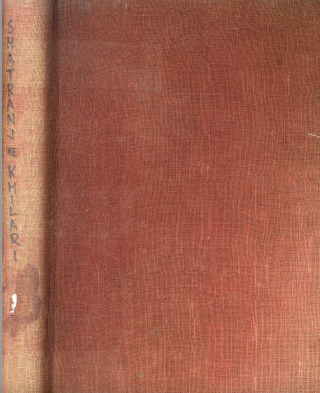 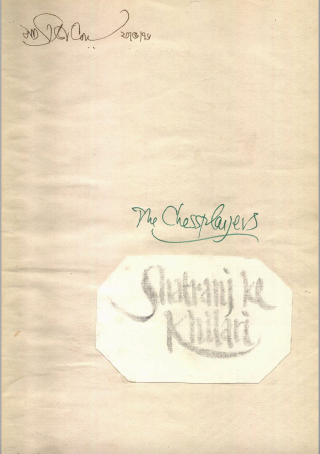 Satyajit Ray's notebook for Shatranj ke Khilari , 1977. Cover and inside flyleaf. Image courtesy of Satyajit Ray Society in Kolkata and available through the National Digital Library of India.

Andrew Robinson, Ray’s biographer, highlighted the formidable difficulties Ray faced while writing the script. Ray needed to comprehend the relationship between Britain and Awadh in the century leading up to the Annexation and hence produced a ten-minute prologue at the start of the film with still shots of contemporary documents, photographs and paintings.[1]  In order to achieve historical accuracy, Ray needed to consult contemporary visual material. Ray first consulted the European and British oil paintings in the Victoria Memorial Hall in Kolkata to understand the portrayal of key political figures. Ray featured Tilly Kettle’s portrait of Nawab Shuja ud-Daula of Awadh with his four sons and General Barker and the artist Robert Home’s portrait of Gazi-ud din Haidar in his prologue.

However, for faithfully recreating Awadhi life in the sets, Ray chose to depend more on the artworks of anonymous Indian painters. Ray initially consulted the collections at the State Museum at Lucknow, but his notes on the Kheror Khata and his correspondences with Suresh Jindal (1942- ), the producer of film, reveal that he was keen to examine the paintings held in the India Office Library. In one of the letters to Jindal, Ray writes, 'All the Lucknow photos in Sharar are pre-mutiny and all come from the India House. I have written to Pam Cullen to send a complete list of what they’ve got on Lucknow.'[2] Pam Cullen (1924- ) who was the European director at India’s National Film Development Corporation’s office in London, was a close friend of Ray and her assistance from London turned out to be of great help.

Ray initially conducted his own research while based in Calcutta. He mostly relied on William Foster’s A descriptive catalogue of the paintings, statues and framed prints in the India Office. Ray referenced eight paintings along with their accession numbers in his notebook. In 1976, Ray managed to see the paintings in London and take photographs when he briefly toured Britain “in the fall of 1976” to meet Sir Richard Attenborough (1923-2014), who was to play Sir James Outram in the film. 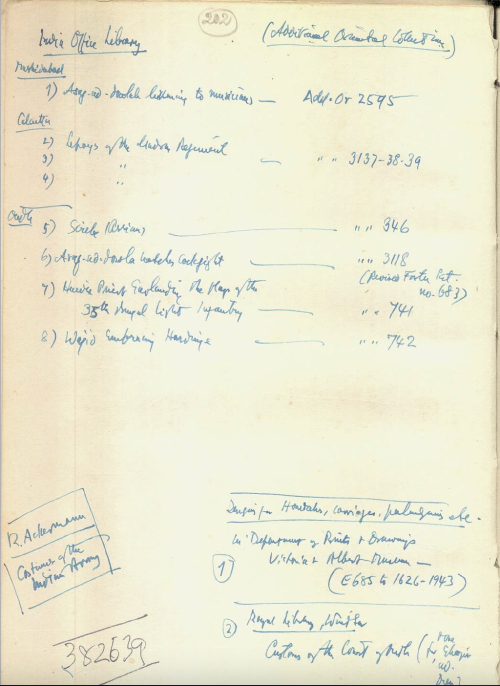 The first entry in Ray’s list though records a single painting ‘Asaf-ud-Daula listening to the Musicians’ with the reference number ‘Add Or 2595’. However, the reference number is allocated to a similar painting showing ‘Asaf ud-Daula celebrating the Muharram festival in Lucknow’. The later reference number in the India Office Library’s collection, Add Or 2600, instead pictures Nawab Asaf al-Daula in his palace ‘seated on a rug smoking a hookah and listening to a party of male musicians’. By looking at the portraits of Wajid Ali Shah’s ancestor Asaf ud-Daula, who ruled from 1775-97, Ray perhaps was looking for a contemporary visual reference that could be adapted to portraying the 19th century ruler Wajid Ali Shah enjoying a private musical concert in the film. Ray’s notebook also recorded the fact that these paintings were made in the Murshidabad style (of eastern Bengal) as opposed to the Lucknow or Awadhi style. It is also interesting to note that, Sir George Nugent (1757-1849), the Commander-in-Chief in India between 1811-15, acquired these two paintings whilst in India. Nugent’s wife, Maria (1771-1834) was known to be a keen collector of Company paintings, more likely to have acquired the paintings from the artist while she was in Calcutta around 1812. 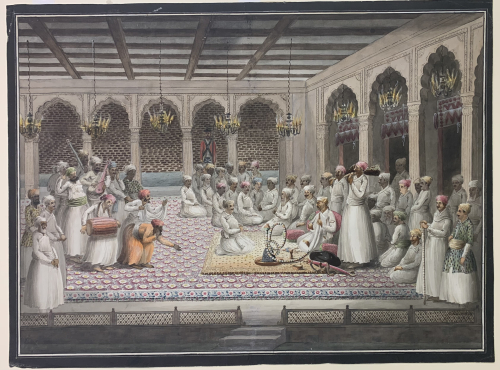 Nawab Asaf al-Daula seated on a rug smoking a hookah and listening to a party of male musicians. Murshidabad school, c. 1812. British Library, Add Or 2600.

Ray listed another painting that featured Nawab Asaf ud-daula. The painting made by a Lucknow artist between 1830-35 shows the Nawab engaged in one of his favorite pastimes, the cockfight  (Add Or 3118). Asaf ud-daula is seen gesturing towards birds at his feet while being seated beside a European gentleman in a red coat. There are two other European gentleman present in the painting along with a number of Indian gentlemen. Rosie Llewellyn Jones speculates that one of the English gentlemen dressed in white trousers and blue jacket could be Colonel John Mordaunt, who appears in the more well-known painting by Johann Zoffany. This painting could be inspired from Zoffany’s work, it is difficult to overlook the similar hand gestures by Asaf ud-daula that one can find in either of the paintings. Ray was known to refer to an engraving of the Zoffany painting at the Victoria Memorial Hall. He perhaps realized the significance of using a cockfight sequence in the movie as a device for establishing contemporary Awadhi culture. However, the segment on cockfight in Shatranj ke Khilari involving commoners from the city, turned out to be very different than how the event was presented in the painting. 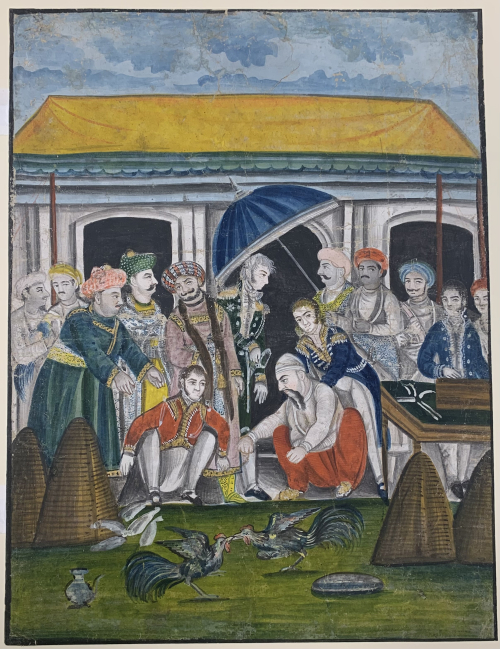 Interestingly, Ray’s notes suggest that he referred to just one painting featuring Nawab Wajid Ali Shah during his visit to the India Office Library. The painting depicting Nawab Wajid Ali Shah embracing the then Governor General of India, Lord Hardinge (1785-1856) was made by an anonymous Lucknow artist, when Hardinge was making a farewell tour of Kanpur and Lucknow before his retirement back to London, in 1848. (Add Or. 741) (Fig.6). The meeting between the two individuals took place on November 22, 1847, at the hall of the Chattar Manzil palace in Lucknow. This magnificent painting featuring multiple characters gave Ray a rough idea of how the interiors of the Awadhi palaces looked like in their heydays. The painting was also instructive on the details of costumes of the Indians as well as the Europeans. Ray perhaps picked up more from the painting than much needed details for his production team. There is a sequence almost at the end of film, where General Outram meets Wajid Ali Shah to formally inform him of the Company’s decision to take over his kingdom. At the beginning of the meeting, Wajid Ali Shah greets and embraces Outram. It is hard not to notice the striking similarity of this sequence with the painting. 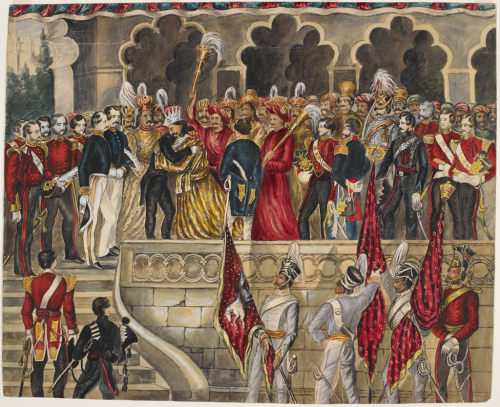 Ray’s various correspondences in the pre-production phase of the film suggest that he was anxious about getting the particulars of costumes of different divisions of the East India Company’s army correct. His discussions with Jindal reveal that Ray’s efforts to find references for uniforms of the Company’s army at the Fort William in Calcutta or at the Barrackpore Cantonment were not too successful. Hence, he consulted the collections of the India Office Library and the Imperial War Museum during his brief visit to London. Ray’s entries in the notebook suggest he photographed three relevant paintings at the India Office Library. These paintings came from a single collection of ten paintings, made by a Cuttack artist around 1840.  The paintings portrayed Sepoys of the 30th (?) Madras regiment in full uniform (Add Or 3137), in light marching order (Add Or 3138) and heavy marching order (Add Or 3139). Ray also secured the assistance Andrew Mollo (1940- ), an expert on army uniforms, who had collaborated in films like Dr. Zhivago and Night of the Generals before. The costume design for the East India Company’s army in the film was eventually done on the basis of Mollo’s sketches. 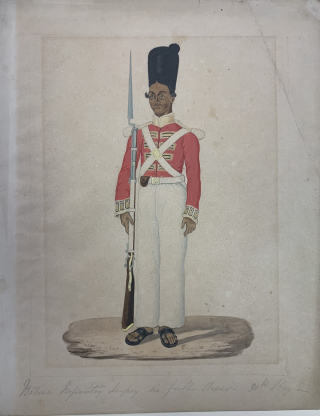 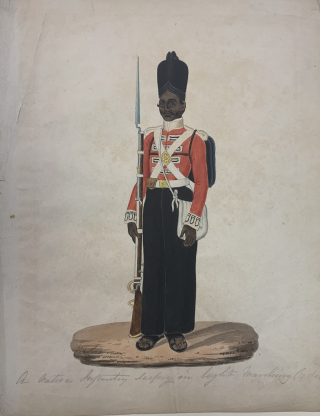 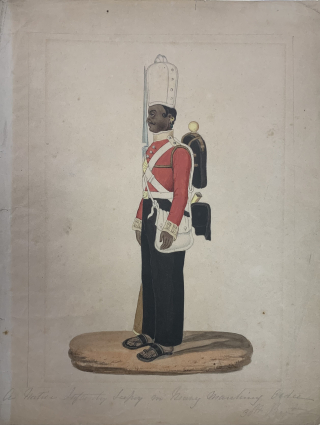 Shatranj ke Khilari despite generating some misgivings from certain quarters, remains one of the most faithful reconstructions of 19th Century India on the screen. Perhaps Satyajit Ray’s centenary marks an apt occasion to look back into the research that went into the film and also the film’s connection with the collections of the India Office Library.

[2] Ray was obviously referring to Abdul Haleem Sharar’s Guzastha Lucknow here. Originally published in Urdu in 1926, an English translation was published just at the moment Ray began working on Shatranj ke Khilari in 1975.