The India Office Records (IOR) contain some fascinating visual materials, mainly photographs capturing the Kaʿba and the Hajj Season (pilgrimage) in the late nineteenth and early twentieth century. These visual materials are provided with short descriptions without any further elaboration on the history of the places or people captured. Displaying a number of those photographs along with some external materials, this blog presents a historical narrative of the Kaʿba, its physical features, and the development of its religious status before becoming the site of Muslim pilgrimage. 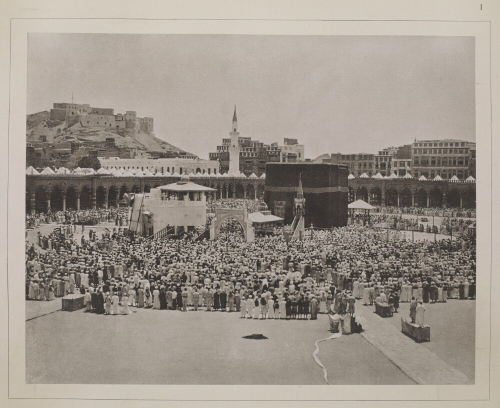 The Kaʿba is the holiest site in Islam. It is known as al-Bayt al-Haram (the Sacred House), and the second qibla (direction). It is located at the centre of the Great Mosque in Mecca. Although other Kaʿbas existed in the pre-Islamic period, such as the Kaʿba of Petra and the Kaʿba of Najran, the Kaʿba of Mecca was the most popular, hence taking over the name without the need to specify its location (Hebbo, Tarikh al-ʿArab, 380). 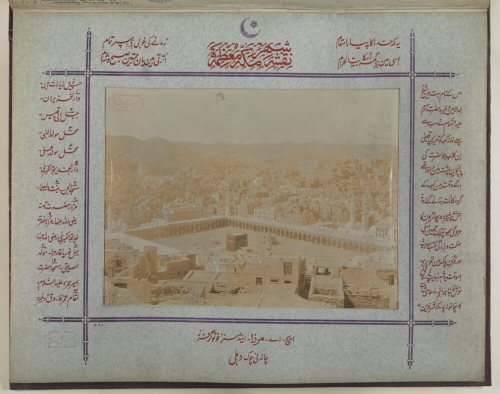 Muslims in general believe that the Kaʿba was the first structure on earth. Behind its majestic cubic shape hides an interesting story of its construction. Its foundation is believed to go back to the Day of Creation, when Prophet Adam built it as a house of worship.

It was, however, during the time of Prophet Ibrahim (Abraham) that the Kaʿba acquired its current shape and characteristics. Following God’s instructions, Ibrahim and his son Ismaʿil (Ishmael) raised the walls of the building on the foundations that were already in place since Adam’s time. The first Kaʿba was without a roof and there are different traditions concerning the number of its doorways.

The significance of Ibrahim’s Kaʿba is in establishing of most of the features present in today’s Kaʿba. These are, al-Hajar al-Aswad (the Black Stone), Maqam Ibrahim (the Station of Ibrahim), Hijr Ismaʿil (the Lap of Ismaʿil), Biʾr Zamzam (the Well of Zamzam), and al-Mataf (the circular space around the Kaʿba).

Situated in the eastern corner of the Kaʿba, al-Hajar al-Aswad is believed to have descended to Ibrahim from heaven. He then set the stone as the starting point of tawaf (circumambulation) around the Kaʿba. When pilgrims pass by the stone, they know they have completed one round. Maqam Ibrahim on the other hand, is named after the place that is believed to have “miraculously” preserved the marks of Ibrahim’s feet when standing at the spot to build the Kaʿba. Today, the Maqam is in a multilateral structure made of glass and brass bars. 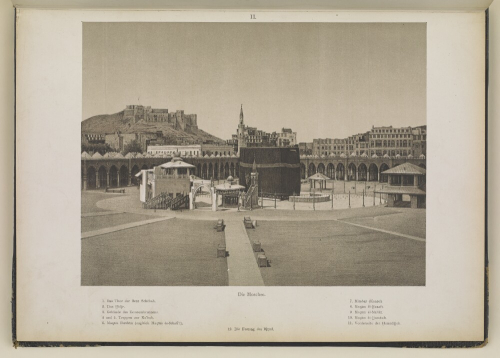 A photograph showing the main features of the Kaʿba (British Library, 1781.b.6/2)

Hijr Ismaʿil refers to the place where Ibrahim left his wife and son in Mecca. The Hijr is situated on the north-western side of the Kaʿba, and is marked by a wall surrounding it. Biʾr Zamzam, on the other hand, is believed to have sprung in the place where Ismaʿil stood, thirsty, while his mother engaged in finding water for him. Although it was subject to periods of dryness, the well continues to provide pilgrims with water until today. Al-Mataf refers to the courtyard around the Kaʿba and starts from a fixed point: al-Hajar al-Aswad. 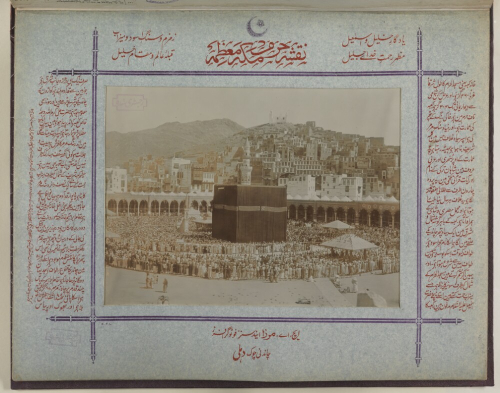 Announcing the Kaʿba as the House of One God, Ibrahim is considered the founder of tawhid (monotheism) in Mecca, and the one who set up the pilgrimage ritual. It is believed that, pilgrimage performed by Muslims today is very similar to the one practiced during Ibrahim’s time. The Kaʿba continued its status as a place of monotheistic religion under its new guardians, the Yemenite tribe of Jurhum. The Jurhum claimed ‘they were related to Ismaʿil by intermarriage, hence their right to the guardianship’ (Hebbo, Tarikh al-ʿArab, 100 and 222). They were powerful in the region and greatly contributed to the prosperity of Mecca. Pilgrims brought expensive gifts to present to the Kaʿba, which eventually became full of treasure. 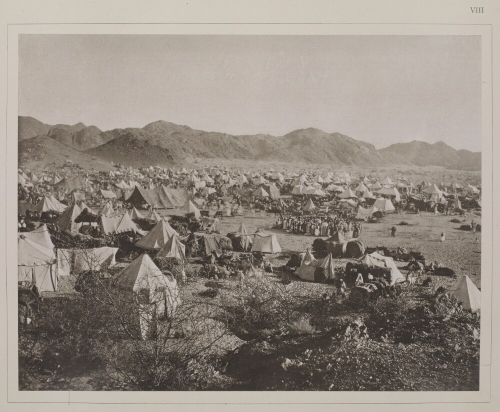 The major change to the Kaʿba occurred when the head of the Khuzaʿa tribe, ʿAmr bin Luhayy al-Khuzaʿi, took over the guardianship from the Jurhum. During his trading expeditions, al-Khuzaʿi came across numerous idols (assnam); worshipped by the locals. He brought some of those with him to Mecca and placed them inside and around the Kaʿba. Al-Khuzaʻi was thus the first to introduce paganism to the region (Ibn al-Kalbi, Kitab al-Assnam, 8-9). Eventually, each of the region’s tribes began to install its own idol in the courtyard of the Kaʿba, which housed over three hundred of them (Hebbo, Tarikh al-ʿArab, 366). The most popular of these were Hubal, Manat, Allat, and al-ʿUzza. 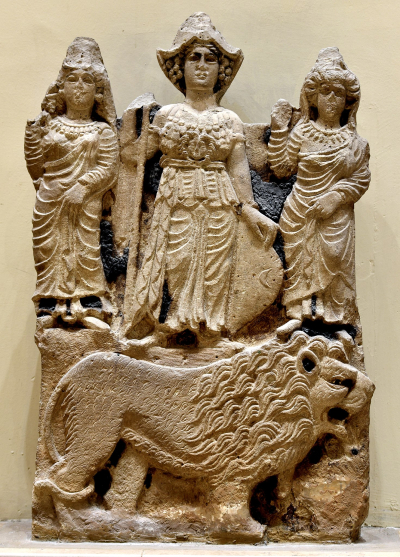 Another exterior addition to the Kaʿba under the Khuzaʿa was the tradition of hanging poems on its walls. These were chosen during literary ceremonies usually performed during the pilgrimage seasons. One of these poems was the muʿallaqa of Zuhair bin Abi Sulma, which has a reference to the Quraysh and the Jurhum tribes performing pilgrimage:

Later on, a new tradition was instituted, namely, the covering of the Kaʿba called Kiswa (also Kuswa). There are different accounts about the first person who put the Kiswa on the Kaʿba, the majority of which agree on the name of the King of Himyar, Tubbaʿ al-Himyari. During his pilgrimage, al-Himyari brought the first Kiswa made of the finest of cloths from Yemen as a gift to the Kaʿba. This influenced many tribes to follow his example up until the time of Qussay bin Kilab of the Quraysh tribe. 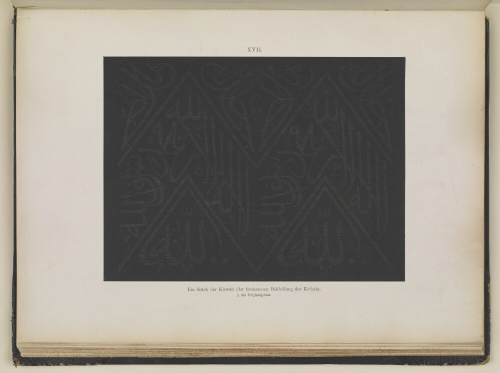 When Qussay bin Kilab, the Prophet Muhammad’s fourth grandfather, came to power he announced himself the new guardian of the Kaʿba, and established the Quraysh power in Mecca. Qussay rebuilt the Kaʿba with stronger walls and for the first time in its history, the Kaʿba was roofed. He allowed the Kiswa to be placed over the Kaʿba only by the head of a tribe, and each year by a different tribe. The covering of the Kaʿba with a Kiswa continues to be a significant custom today. 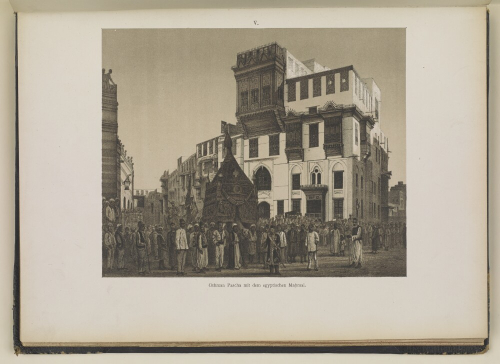 Qussay was also the holder of the key to the Kaʿba, which was transferred to his descendants until it reached its final destination in the hands of a Meccan family called, the Banu Shayba who are still the key holders today. 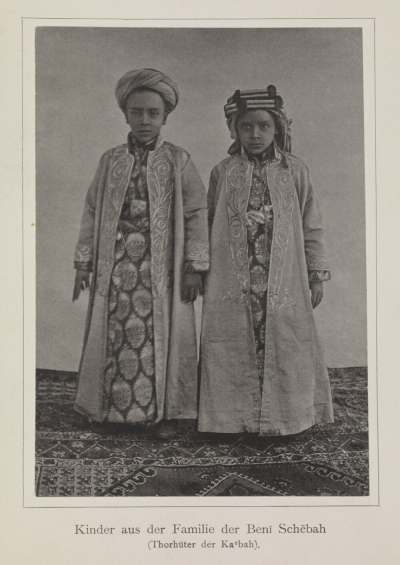 A few years before the advent of Islam, between 600 and 607 CE, Quraysh decided to rebuild the Kaʿba, adding more facilities to the building. According to the Sira (Prophet’s biography), when the Quraysh tribes rebuilt the Kaʿba, there was a debate on who would replace the Black Stone back on its wall. Muhammad bin ʿAbd Allah (later Prophet Muhammad) was chosen to do so. He placed the stone in the middle of a robe and asked for one man of each tribe to hold onto the robe while he placed the stone to the wall. This way all the tribes participated in placing it into the wall (Mukhtassar Sirat Ibn Hisham, 33-35). 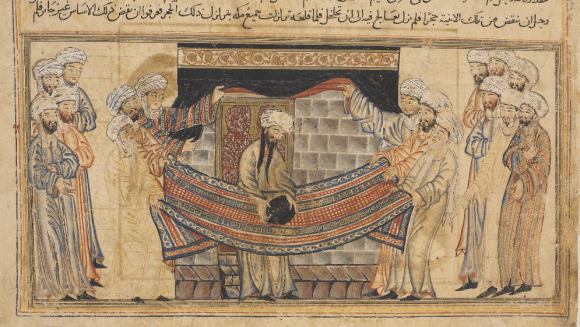 During the ascent of Islam, Prophet Muhammad and his followers conquered Mecca and captured the Kaʿba in the eighth year of the Hijra (629-30 CE). The Prophet’s first mission was to revive the function Ibrahim built the Kaʿba for. He himself broke the idols inside and around it (Mukhtassar Sirat Ibn Hisham, 234-235 and Kitab al-Assnam, 31). As the Kaʿba was recently built, the Prophet decided to keep the old building, announcing the Kaʿba as the House of the One God, where Muslims are to perform their annual pilgrimage. One of the Prophet’s companions, Bilal bin Rabah, was the first to raise the adhan (the call for prayer) from the roof of the Kaʿba.

From that day on, the Kaʿba continues to be Islam’s holiest place of worship. Today, over two million Muslim worshippers from all over the world, gather around the Kaʿba to perform their annual ritual of Hajj during the month of Dhul-Hijja of the Islamic Hijri calendar. 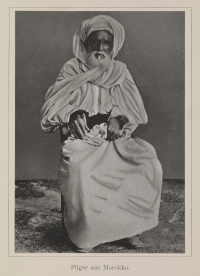 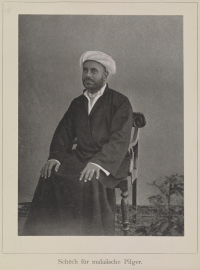 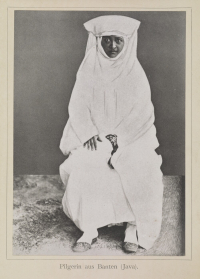 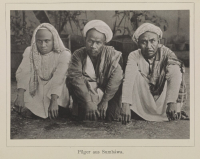 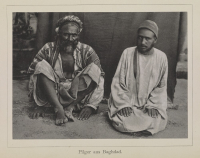 To mark the conclusion of the ritual, pilgrims sacrifice animals in the name of God and start their celebration of ʿEid al-Adha (the Festival of Sacrifice), which this year falls on Saturday July 9th. 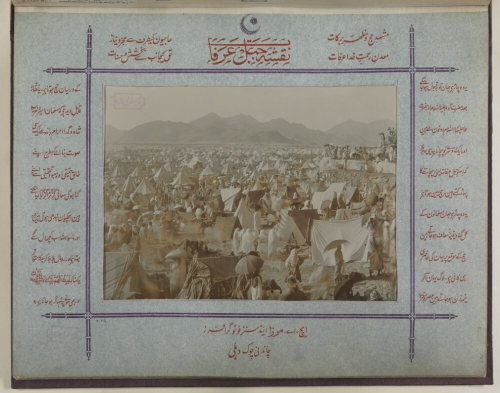 Posted by Ursula Sims-Williams at 5:13 PM