Beneath the glitter: Kinzan emaki, inside the gold mines of Sado

Amongst the many gilded books and manuscripts in the British Library’s Gold exhibition is one item which tells the story of some of those who, across the centuries and around the world, have laboured under harsh conditions to produce this prized material.

Scenes inside the gold mine. In the centre is a circular mechanical fan to remove foul air and smoke from oil lamps and fires. Below workers remove water by a hand-operated system of buckets and pulleys. British Library, Or 920.

On display is an illustrated Japanese scroll (Or 920) which gives a glimpse into the workings of a gold mine on the island of Sado in the 18th century. The manuscript bears the title Kinginzan shikinaioka kasegikata no zu 金銀山敷内岡稼方之図 (Illustrations of working methods inside the gold and silver mines) and is one of a set of three scrolls (with Or 918, Or 919) in the Library’s collection which give detailed representations of mine workings - from the miners toiling underground to the smelting process and the manufacture of coins on the surface. 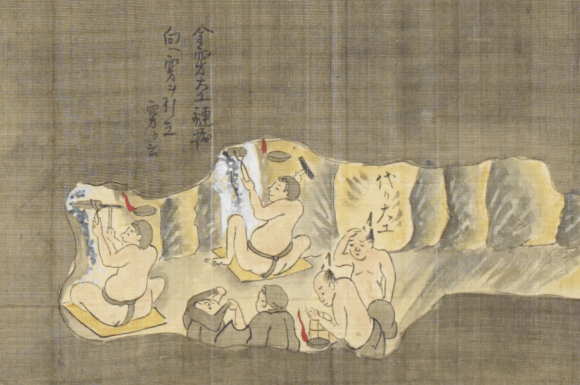 Gold miners toiling at the rock face. Wearing only loincloths and with just the light from small oil lamps, they worked for up to eight hours in dark, hot and cramped conditions. British Library, Or 920 (detail).

Sado Island lies 35 kilometres off the north-west coast of Japan. Today it is well known as the home of the Kōdō drummers but in the past its claims to fame were as a place of exile for disgraced notables and as a source of gold and other precious metals.

The earliest reference to gold from Sado is found in the 12th century anthology Konjaku monogatarishū 今昔物語集 (Collection of tales of things now past). One of the stories describes how the Governor of Noto, hearing of the abundance of gold on Sado, sends iron-workers to the island to bring some back. This story is thought to refer to gold panning rather than mining and for many centuries it was alluvial gold, dug from the sands of the seashore, which was the source of Sado’s riches. 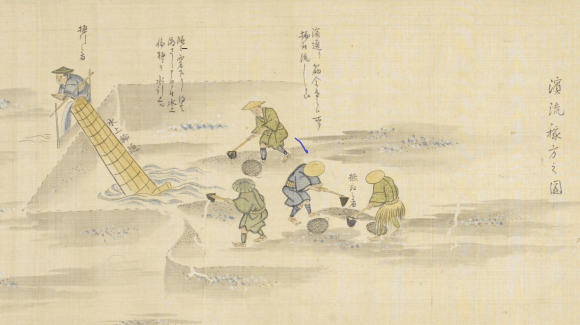 Panning for gold on the seashore. On the left is an Archimedes screw for pumping out excess water. British Library, Or 919 (detail).

During the 16th century, mining of gold and silver from the rock in underground workings allowed the island's full potential to be developed. An enterprising merchant called Toyama Mouemon 外山茂右衛門 opened the first mine at Tsurushi 鶴子 in 1542. Then in 1589 the warlord Toyotomi Hideyoshi 豊臣秀吉 (1537-1598) seized control of the mine and sent experts to speed up production.

After the establishment of the Tokugawa Shogunate in 1603, the island was placed under direct government control with an official called the Sado daikan 佐渡代官 (Deputy for Sado) and later the Sado bugyō 佐渡奉行 (Commissioner for Sado) in charge of operations. In the years that followed, technological and administrative changes improved the profitability for the government and during the peak years of 1615-1645 Sado’s mines yielded around 400 kilograms of gold per annum. Production declined during the 18th century but enjoyed a brief revival in the 19th century following the introduction of Western mining technology. The last working mine on the island closed in 1985.

Women, known as ishierime 石撰女, remove waste material from the ore by washing it in sieves and chipping away the unwanted lode with hammers under the watchful eye of supervisors. British Library, Or 920 (detail).

The British Library’s scrolls, acquired as part of the collection of Philipp Franz von Siebold in 1868, belong to a genre commonly known as Kinzan emaki 金山絵巻 (Illustrated scrolls of gold mines) or Kinginzan emaki 金銀山絵巻 (Illustrated scrolls of gold and silver mines). Their primary purpose was to provide an accurate representation of the complicated workings of the mines, both below and above ground for the benefit of the government officials appointed every few years. Since their function was to explain the current state of operations it was necessary to have a new scroll prepared when changes in working methods or administrative procedures occurred. Scrolls were also sent back to the government in Edo to keep it informed of developments and officials may have received copies as keepsakes when their term of appointment ended. 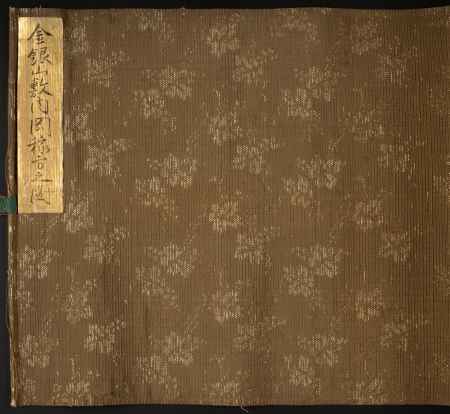 Brocade wrapper and gilded title slip of Or 920. British Library.

The three scrolls constitute a single manuscript which record in detail the processes involved in the extraction and processing of the ore as well as the administrative and commercial activities associated with the mines. Each scroll has a gold paper slip glued to its outer cover bearing an individual title taken from the caption accompanying the first scene. Thus Or 918 is Kobandokoro nite sujigane tamabuki no zu 小判所ニテ筋金玉吹之図 (Illustrations showing the smelting of gold balls in the Mint), Or 919 is Dōtokoya no zu 銅床屋之図 (Illustrations of the copper smeltery) and Or 920 is Kinginzan shikinaioka kasegikata no zu 金銀山敷内岡稼方之図 (Illustrations of working methods inside the gold and silver mines). Comparison with other scrolls of this type shows that Or 920 is actually the first part of the manuscript, Or 919 the second and Or 918 the third. Inspectors watch closely as gold strips are cut up and weighed ready to be made into coins. British Library, Or 918 (detail).

Each scroll consists of a number of silk panels, backed with mica-embossed Japanese paper, and glued together. A white silk edging has been added to the top and bottom of each panel. A brown brocade cover with gold floral designs is attached at the beginning of the scroll while the end is fixed to a wooden roller. The width of the scrolls is consistently 23.5 cm for the painted portion with a further 1 cm edge top and bottom making a total width of 25.5 cm. However, it is clear that the scrolls have been trimmed at some time since in places the captions to the illustrations are cut off at the edge. The length of the individual panels varies considerably, averaging around 120 cm. Or 920 has seven panels, Or 919 and Or 918 each have six. The overall lengths are 822 cm for Or 920, 714 cm for Or 919 and 752 cm for Or 918 giving a grand total of 2,288 cm.

Very few examples of Kinzan emaki bear a date or indication of the artist so dating has to be based on internal evidence, taking into account developments in technology, buildings, changes in management and administration of the mines and even the costumes and hairstyles of the people shown. For example, the Yoseseriba 寄勝場, the building where grading of the ore took place, was constructed in 1759. It is shown in the second of the Library's scrolls so, the manuscript must have been drawn after this date. 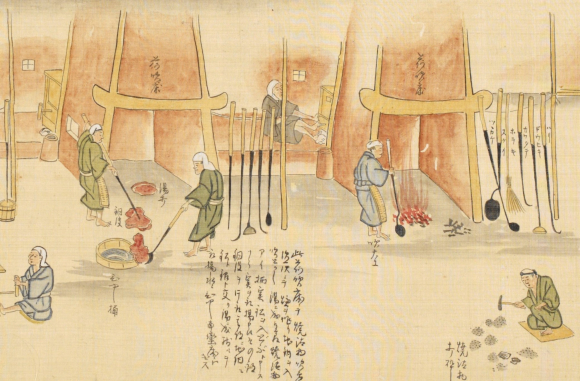 Furnaces in the smeltery. The box-like structures at the back are the bellows operated by pulling on a wooden handle. British Library, Or 919 (detail).

Another aid to dating is the type of bellows used to heat the furnaces in the smithies and smelting workshops. Originally each furnace had its own set of bellows operated by one man but from the Kansei Era (1789-1801) a decline in productivity and a need to reduce the workforce led to the introduction of a system where one set of bellows was placed between two furnaces, halving the number of operatives required. The Library's scrolls show the former arrangement so must depict activities before 1789. While the manuscript, therefore, represents the appearance of the mines between 1759 and 1789, it does not follow that this is when the scrolls were painted.

One of the few examples of Sado kinzan emaki whose artist can be identified is the work of Ishii Natsumi 石井夏海 (1782-1848). Its content and artistic style are very similar to the Library’s copy and while no proof exists that it is also by Ishii Natsumi, it is certainly plausible. Comparison with other similar scrolls suggest that they were painted in the early decades of the 19th century.

The British Library's three Sado kinzan emaki are a fascinating resource for the study of the complex world of mining in pre-modern Japan. They also allow us to gain an understanding of the hard, and often dangerous, lives of the men, women and children who worked in the mines.

The exhibition Gold: 50 spectacular manuscripts from around the world runs at the British Library until 2 October 2022.  Book your tickets here.

Posted by Annabel Gallop at 9:54 AM