The British Library’s GOLD exhibition, which runs until 2 October 2022, explores how over the centuries people have found all kinds of ways to incorporate gold into books and documents: as golden writing, by inscribing on gold surfaces, in illuminated pictures and through gilding book covers. On display are 50 golden manuscripts in 17 different languages, from 20 countries, ranging in date from around the 5th century to the 1920s. 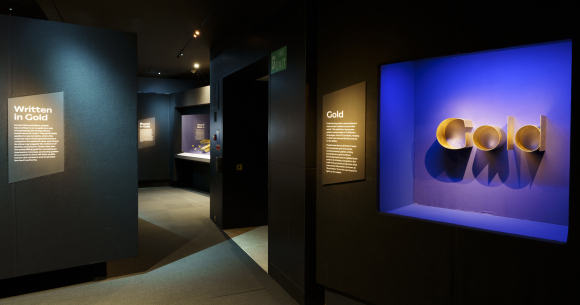 Preparations for the exhibition started over two years ago, with the intention of representing manuscript traditions from all over the world. Selections were made from the British Library’s Western Heritage collections by curators Eleanor Jackson and Kathleen Doyle, and from the Asian and African collections by Annabel Gallop in consultation with colleagues. However, the Covid pandemic and closures of the British Library buildings had a major impact. Crucially, we were unable to bring together all the selected items to be looked at together in a single space, to see how they would relate to one another. Instead, most of our choices had to be examined individually, within the separate facilities of each department. Therefore, when we began to install the exhibition just days before it opened on 19 May, it was the first time that we had the chance to see together manuscripts from different corners of the globe. Fascinating congruences and symbioses were revealed, even including some not originally anticipated. This blog will therefore focus on five ‘pairings’ of manuscripts currently on display side by side in the GOLD exhibition, which illustrate how the appeal of gold has connected writing cultures all over the world.

The first section ‘Written in Gold’, reflects on how, across time and place, people have written in or on gold as a way of expressing the extraordinary importance of a text. One case in particular is a veritable treasure house, containing an array of manuscripts actually written on gold. 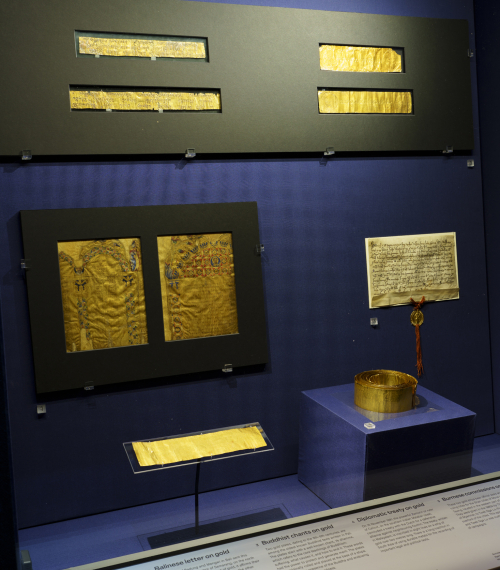 Golden manuscripts on display in the GOLD exhibition.

On the left-hand side of the wall are the oldest items in the exhibition: at the top, the two Maunggan gold plates from Myanmar, dating from the 5th to 6th centuries, inscribed with Buddhist chants in Pali in Pyu script, while below are the Golden Canon Tables – listing passages common to some or all of the Four Gospels – written in Constantinople in the 6th to 7th centuries, on parchment covered entirely with gold. Although very different in format, language, script and faith, these two manuscripts, one Buddhist and one Christian, created barely a century apart on almost opposite sides of globe, both elevate the sacred texts contained by their golden settings.

One of the two Maunggan gold plates, Myanmar, 5th to 6th centuries. British Library, Or 5340 A 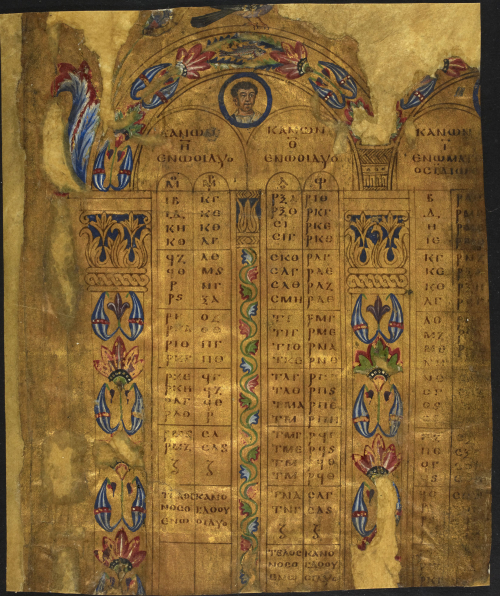 On the right side of the case is a parchment charter, which is exceptional for its use of a seal of gold, rather than the more usual wax. The charter was issued by Baldwin II, the last of a series of Latin emperors who ruled Constantinople from 1204–61, after he was deposed and fled to Western Europe. However, he still presents himself as reigning emperor through his use of the gold seal, which portrays him wearing a Byzantine style crown and jewelled robe. Above Baldwin’s charter are displayed two Burmese commissions inscribed on gold in the 1880s, issued by Thibaw, the last king of Myanmar, to Twek Nga Lu, installing him as overlord of the Shan cities of Mone and Keng Tawng. This appointment was contentious, and Twek Nga Lu was ousted locally after a series of campaigns. The two strips are engraved with the ritual ruling titles for these cities, and also each bear two official seals, impressed directly on the sheets of gold. Thus in both cases, the sumptuous gold seals used belie the degree of worldly power actually held. 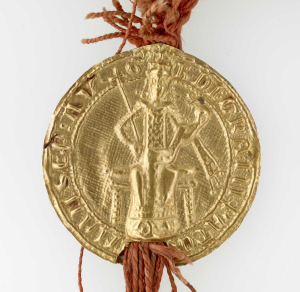 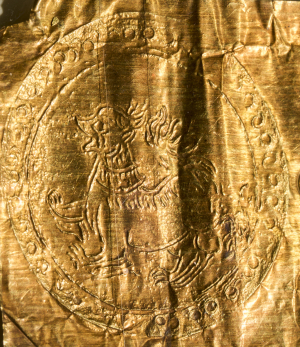 Left: Gold seal of Baldwin II, on a grant of lands at Biervliet to the Church of St Bavo, Ghent, Biervliet, the Netherlands, May 1269. Add Ch 14365.  Right: Seal impressed on a commission issued by King Thibaw, Myanmar, 1880s. Mss Burmese 211 A

The second section, 'Pictured in Gold', presents an exquisite array of illuminated manuscripts. With its reflective properties, gold was ideal for representing sacred light, and figures might be set against golden backgrounds to suggest an expanse of heavenly light. On display in the first case is the famous Golden Haggadah, created in northern Spain around 1320, which contains 14 full pages of illustrations of scenes from Genesis and Exodus. Shown alongside is the Queen Mary Psalter, created in London around the same date. The right-hand page bears a rare illustration of the so-called Holy Kinship, based on a popular medieval account of the Virgin Mary’s sisters and nephews.  The quadrilateral page layout in the Golden Haggadah complements well the four panel arrangement in the Queen Mary Psalter, while in both manuscripts, figures are set against intricate cross-hatched backgrounds of gold leaf, similarly incised with diamond shapes: artistic commonalities thus transcend national boundaries and religious traditions. 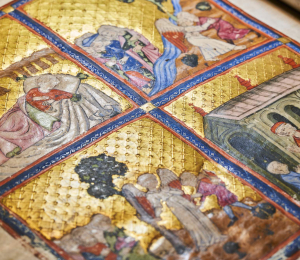 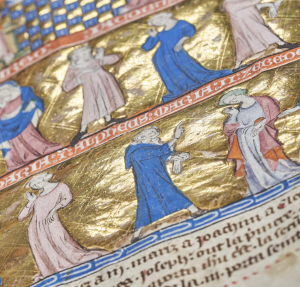 The final case in the exhibition, ‘Bound in Gold’, shows how covering a book with gold indicated the value of the text that is within, while also allowing the owners to display their wealth and taste to the world.

Bound in gold: the case of golden book covers.

Two masterpieces in miniature stand out: an octagonal Qur’an manuscript made in Iran in the 16th or 17th century, with a filigree golden binding, and an outer case of white jade. Too small to be read easily, miniature Qur’ans were usually carried by travellers as protective amulets. Displayed beside it, and only a fraction bigger, is an English girdle book with covers of gold tracery and black enamel, created in about 1540. In the courts of 16th-century Europe, it was fashionable for aristocratic women to hang from their belts miniature prayer books bound in elaborate metalwork covers. These girdle books provided their owners with handy reading material as well as stylish dress accessories. This exquisite example contains selected Psalms translated into English verse by John Croke, a clerk in Chancery who prepared and wrote out documents for King Henry VIII. These two manuscripts, created around the same time but hundreds of miles apart and in different religious traditions, thus represent similarly elegant artistic solutions addressing the need for a tiny religious book to be carried on the person. 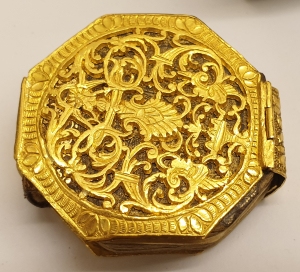 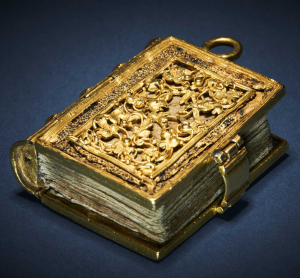 Perhaps the most historically significant item on display in the binding case is a Qur’an, copied in Marrakesh in 1256, with the oldest known gold-tooled binding in the world. The technique of gold tooling, where gold leaf is impressed onto leather with a metal stamp, is thought to have originated in Morocco, spreading to Europe from around the 15th century. Also on display is a very fine gold-tooled binding created in France in the 17th century by an anonymous master craftsman known as Le Maître Doreur. Seeing the two manuscripts side by side, one cannot help be struck by how the French binding echoes the quintessentially Islamic geometric patterns of the Qur’an covers created nearly four centuries earlier. 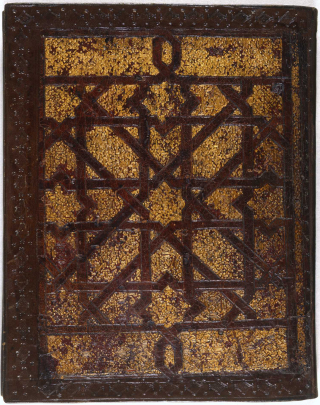 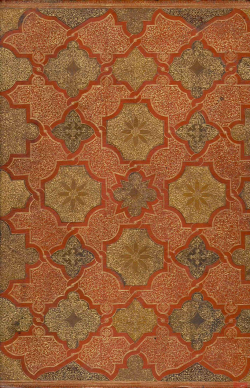 We hope you will find an opportunity to visit the exhibition in person to see these beautiful manuscripts, and many others.