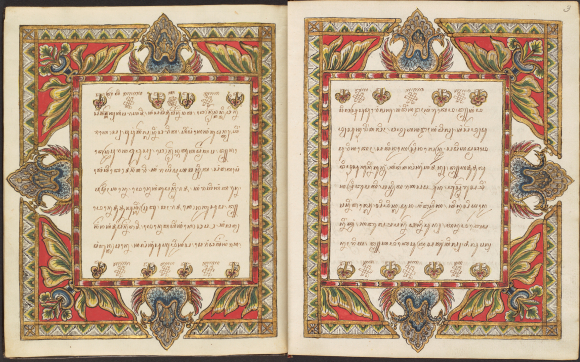 The Bollinger project will make accessible a large number of illuminated Javanese manuscripts from the collection of John Crawfurd, many of which may have been decorated in the scriptorium of the Pakualaman court in Yogykarta. The Pakualaman principality was founded in Yogyakarta in 1812 by the British to reward Prince Paku Alam for his support for the British military campaign against Sultan Hamengkubuwana II of Yogyakarta. Paku Alam I was on very cordial terms with John Crawfurd, British Resident of Yogyakarta from 1811 to 1814, a relationship cemented by their shared interests in Javanese literature and history. In addition to his portion of manuscripts seized from the royal library of Yogyakarta following the British attack in 1812 (and digitised in 2019 through the Javanese Manuscripts from Yogyakarta Digitisation Project), John Crawfurd also commissioned many further copies of Javanese texts, and these may have been adorned with illuminated frontispieces or wadana by artists from the Pakaualaman. Two distinct styles of illumination can be distinguished in Javanese manuscripts in the Crawfurd collection.  One is a more classical style with essentially rectangular frames, on which has been superimposed a diamond-shaped outline, in many cases taking the form of ornamental arches on the three outer sides of the text on each page.  A fine example is shown above, on a manuscript of the Sĕrat Gada (Gonda) Kusuma, Add 12297.  These frontispieces derive from the broader Islamic tradition of decorated frames, symmetrical around the central spine of the book, which often adorn the initial double opening pages.

A rather different style of illuminated frontispiece associated only with Yogyakarta has been termed wadana gapura, 'gateway frontispieces', or wadana renggan candhi or ‘frontispieces decorated as temples’ (Behrend 2005: 49), alluding to the temple-like structures of the decorated frames surrounding the text block on each page, with a plinth-like base and architectural features such as columns, arches and windows, often with ‘brick’ detailing. These wadana gapura are identical on each of two facing pages, rather than being symmetrical about the gutter of the book as in the case of the more classical double-page wadana described above. Shown below is another manuscript of the same literary text, Sĕrat Gonda Kusuma, Add 12295, with a temple-style decorated frontispiece. 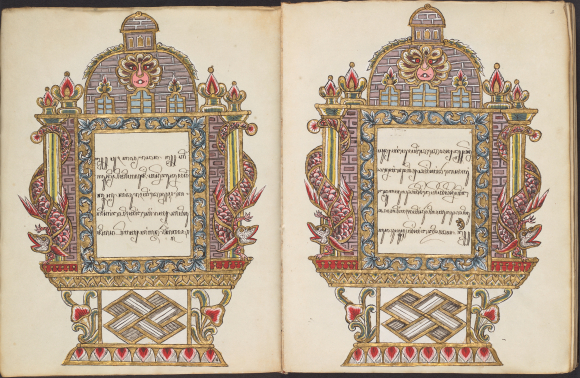 In a recent blog, Dick van der Meij has noted that while in Javanese manuscripts in the British Library, the 'classical' wadana  tend to enclose the start of the text which then continues without any hiatus onto the following pages, in manuscripts with 'temple'-style wadana gapura, the illuminated frames are placed a few pages before the start of the text proper, and the text within the decorative frames is written by a different hand from that found in the body of the main text itself. Moreover, the opening lines of the text are usually repeated within the decorative frames, and a small floral marker is then placed at the appropriate place in the main text (probably indicating to a reciter the point where the text from the frontispiece rejoins the main text). These devices all suggest that these temple-style illuminated frames were added after the main text was copied, at a second distinct stage within the manuscript production process.  It could be hypthesized that the examples of 'temple' wadana in Javanese manuscripts in the British Library mark the very beginning of the development of this artistic genre at the newly-formed Pakualaman court in Yogyakarta. 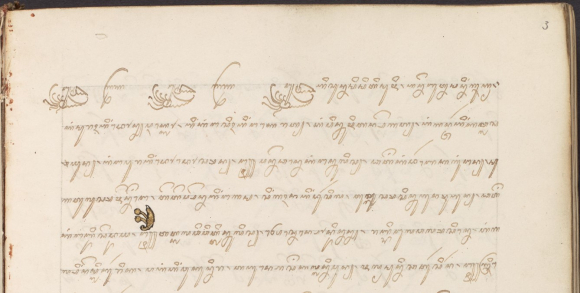 Sĕrat Gonda Kusuma, 1813, showing the start of the text, in a different hand from that on the illuminated pages, with a small floral marker indicating where the texts join up. British Library, Add 12295, f. 3r (detail)

In addition to the two illuminated manuscripts of Sĕrat Gonda Kusuma highlighted above, there is another copy in the British Library also now available online, Add 12294, and the digitisation of so many Javanese manuscripts greatly enhances the task of comparative literary analysis.  Many Old Javanese texts known today have survived through copies preserved in Bali, which are generally written on palm leaf (lontar). A few manuscripts in the British Library which contain Old Javanese texts on paper appear to be copies made for British patrons from palm leaf exemplars sourced from Bali. Among these is a copy from the Crawfurd collection of the Bhāratayuddha kakawin, the Old Javanese version of the Hindu epic Mahābhārata, which was composed in Java probably around the 10th century. The manuscript shown below, Add 12279, opens with the Old Javanese text, followed by a word-for-word explanation in modern Javanese, but half-way through the volume (from Canto 22 on f. 147r), the text continues in Old Javanese only. 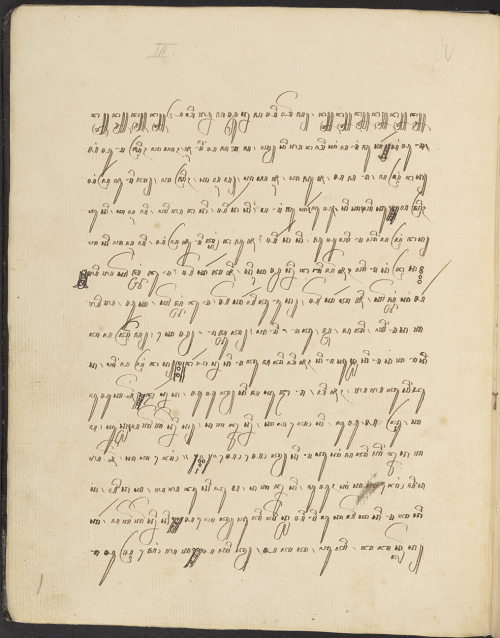 Another copy of the Bhāratayuddha (MSS Jav 25), from the Mackenzie collection, gives the Old Javanese text in Balinese script written in black ink, accompanied by an interlinear Modern Javanese translation in red ink, and is dated 28 August 1812. According to the inscription on the first page, this manuscript was sent to Col. Colin Mackenzie by the son the of Panembahan of Sumenep in Madura. This manuscript is also due to digitised as part of the Bollinger project, and will soon be available online. 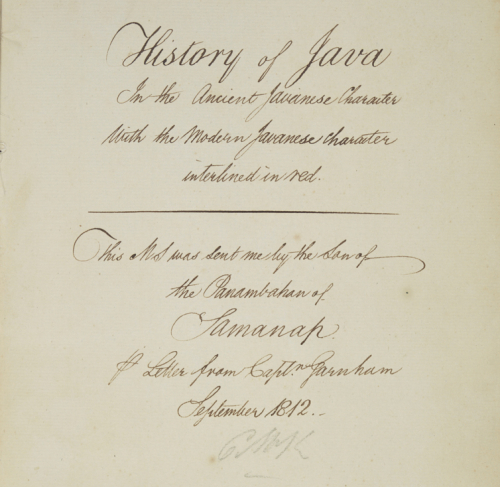 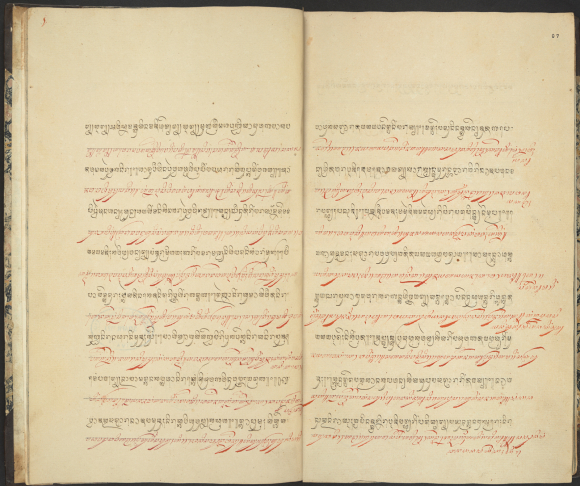 In the late eighteenth century the Old Javanese Bhāratayuddha kakawin inspired the composition of the Bratayuda kawi miring, probably the work of the Surakarta (Solo) court poet Yasadipura II (Tumenggung Sastronagoro, 1760-1844). The term kawi miring or ‘sloping/inclined Old Javanese’ is explained by Barbara McDonald in her Ph.D. thesis (1983: iii) as describing ‘a particular genre of literature which emerged in the Central Javanese courts of Surakarta in the late eighteenth century. As the term literally suggests, texts classified as kawi miring were considered to have been written in a poetic medium that ‘inclined’ towards the ‘kawi’ texts of the Old Javanese period.’ The British Library holds several copies or parts of the text of the Bratayuda kawi miring, including a newly digitised manuscript, MSS Jav 15. 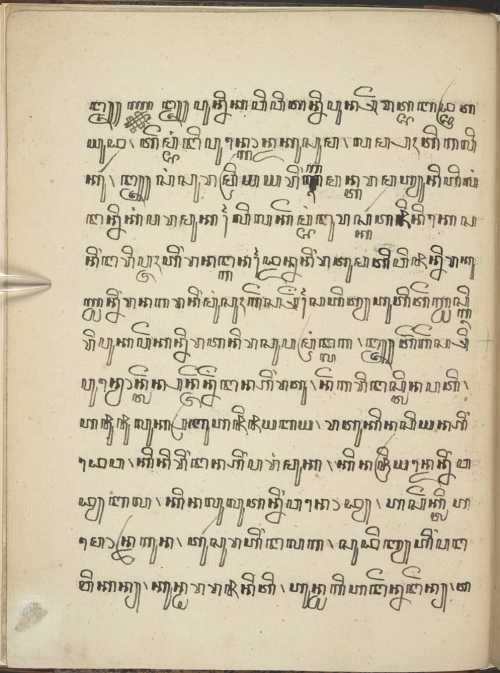 Soon to be digitised is MSS Jav 23, which contains just six cantos of this work. Both these versions can now be compared with an earlier manuscript of the Bratayuda kawi miring, MSS Jav 4, dated 1797, originating from the kraton (palace) library, which was digitised during the earlier Javanese Manuscripts from Yogyakarta Digitisation Project. The late eighteenth-century date of this beautiful manuscript suggests it may be amongst oldest known copies of this text. 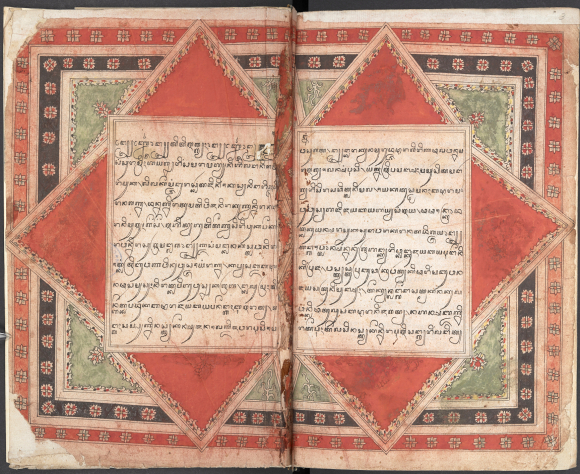 The Modern Javanese version of the Bhāratayuddha kakawin, the Sĕrat Bratayuda, is found in two manuscripts in the British Library, one of which, Add 12326, has just been digitised. According to a note by Crawfurd, this manuscript was copied for him ‘from a manuscript supplied by one of the princes at Djocjakarta (i.e. Yogyakarta)’. A fragment of Serat Bratayuda is also found in MSS Jav 9, which will soon be digitised too. 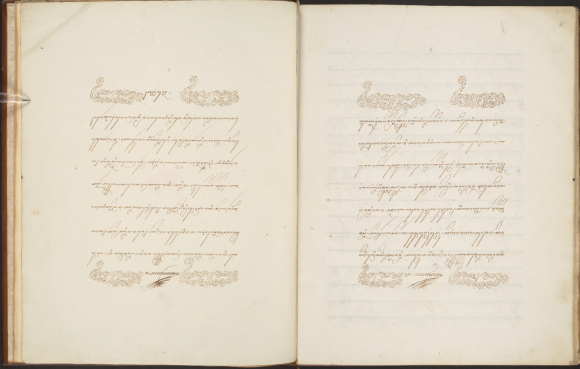 While the Crawfurd collection primarily consists of historical and literary works, the Mackenzie collection is also strong in primbon, compendia of various texts on religious-mystical knowledge.  One such volume is MSS Jav 30, dating from the 18th century, which contains a range of texts including suluk, mystical songs, as well as a primbon with many magical drawings for protection and divination, as shown below. 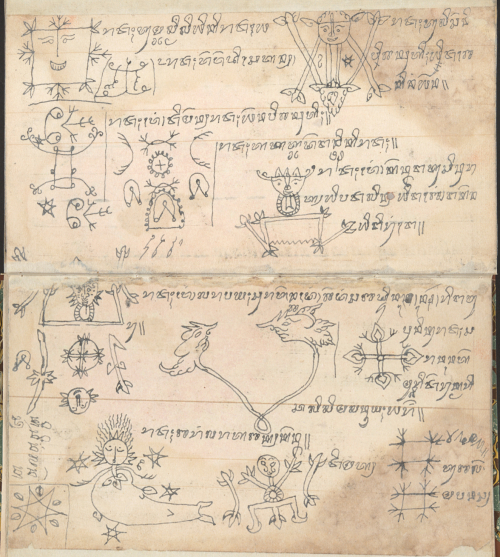 Also newly digitised are a number of Islamic manuscripts, with texts in Javanese written in Arabic (pegon script), including IO Islamic 2448, which contains a work on the mi‘raj, the ascension of the prophet Muhammad. 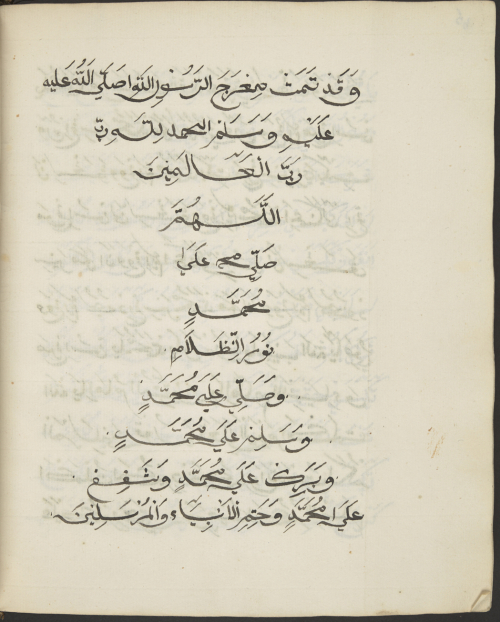 Photography of all 120 manuscripts in the Bollinger Javanese Manuscripts Digitisation Project has now been completed, and over the coming months, once all the images have passed the quality control stage, the manuscripts will be published online. Keep on eye on the Digital access to Javanese manuscripts page, where each shelfmark will be hyperlinked as it becomes available online.