This guest blog is by Roni N. Wang, a Ph.D. candidate at SOAS, University of London, focusing on contemporary Thai Buddhism. Roni’s research looks at Buddhist Cosmological Parks in Thailand.

Within the Buddhist cosmic scheme, birth in the realm of hell is the lowest level possible and undeniably the most horrific outcome of negative karma. Illustrations of these gory dwellings - lit by the reddish glow of blazing fires and echoing with spine-tingling screams of tortured denizens - can be found in Phra Malai manuscripts at the British Library. The story of Phra Malai tells of the arahant (one who attained enlightenment) Malai who, through accumulated merit and meditation, manifested the ability to travel to different realms of existence, and witnessed the horrors of the hells.

Inspired partly by this imagery are sculptural depictions of these scenes which can be found in Thai cosmological parks. Housed within Buddhist temple precincts, these parks are spaces in which different cosmic realms, local scenes, historical figures and events, and anecdotes from the Buddha’s life story come to life via three-dimensional imagery. Most popular amongst park visitors are the hell sections, some depictions of which will be explored here in relation to the Phra Malai manuscripts.

Before delving into the imagery of the monk’s hellish visions, it is vital to distinguish between two life forms that appear in the hells: hells’ denizens and hungry ghosts (Pāli: peta). The first, the hell dwellers, are creatures who were born in one of the hells, and are afflicted with myriad torturous punishments. The second group are the hungry ghosts, who are born into a realm of their own, usually due to lighter offenses or after having served one or more life spans as hell dwellers. The physical dwellings of these ghosts are varied. Some may roam the hells, and these are indeed the creatures we encounter in the depictions discussed here. Others wander the human realm, and some populate a ghostly town said to be situated above the hells. These ghosts differ in physical appearance and characteristics, but share the same grim fate, leading futile lives of constant unattainable craving, which is often expressed by ceaseless hunger and thirst. 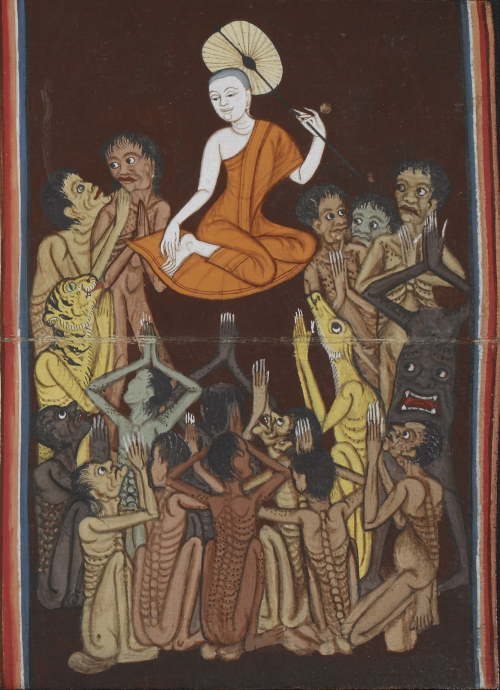 Now let us begin our exploration of the manuscripts’ depictions and their counterparts in the parks. One notable scene that can be found in Or 6630 (fig. 2) portrays Phra Malai seated amongst hell dwellers who ask him for meritorious assistance. As the story goes, the monk gave a sermon, after which the inhabitants of hell asked him to pay a visit to their living relatives back in the human realm to request them to perform merit on their behalf. The narrative that this image conveys emphasises the importance of merit performed by relatives for their deceased ancestors, as well as the notion that salvation is dependent on an inter-realm relationship that is communicated by ascetics. 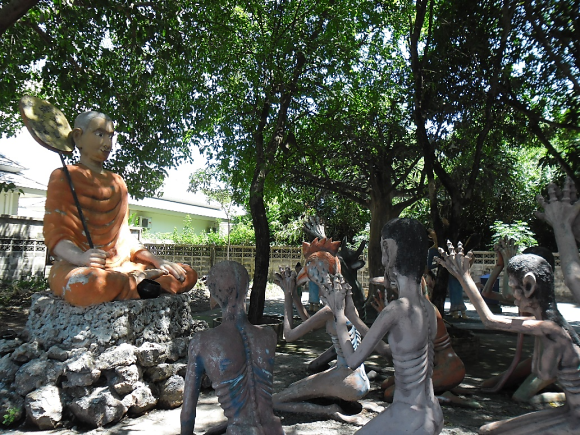 This scene is replicated in Wat Saen Suk Park in the eastern province of Chonburi (fig. 3). As in the 1875 manuscript, the creatures that surround Phra Malai here include naked and emaciated hell denizens and ghosts. Also noticeable are those with human bodies and animal heads. These creatures are dwellers of a hell called Saṇghāta, birth into which is a result of killing or burning animals.

These creatures also appear in OR14664 (fig. 4), displaying different animal heads, with one impressive rooster being positioned in the centre. 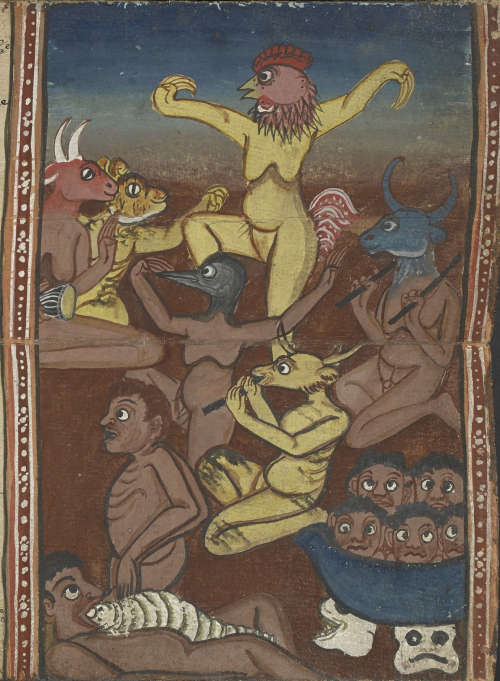 Amongst these disfigured creatures, Or 15257 (fig. 1) displays ghosts with no head but with facial features on their abdomen. This ghostly existence is the fate of robbers or thieves who used violent methods to obtain property that belonged to others. This type of headless ghost makes an appearance in the park discussed above, Wat Saen Suk. Here, it is seen holding a spear in its hand (fig. 5). It is said that the spear was given to it by Yama, the king of death, to keep away the lurking crows that tended to prey on it. 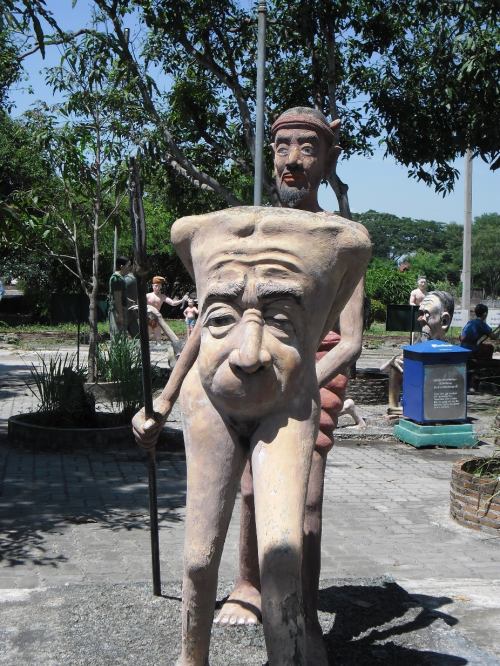 Another odd creature, portrayed in Or 14710, is a male ghost with extremely large testicles, which he carries on his shoulder (fig. 6). This horrific creature was born into this state after serving a life span in hell. When he was a human, he was an evil judge who took advantage of his powerful position. 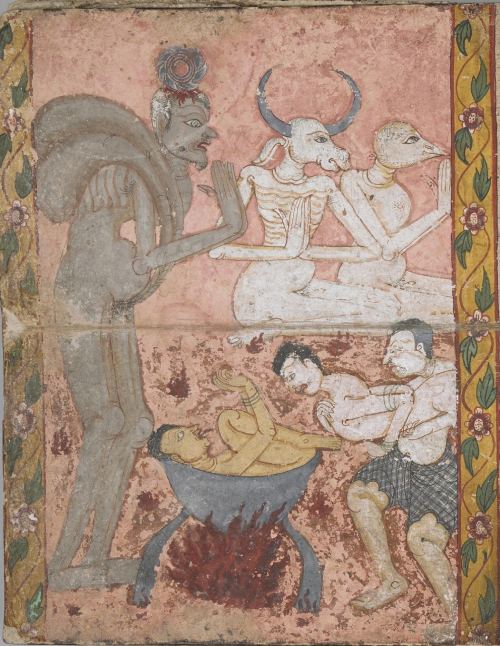 This same being is represented in Wat Mae Keat Noi, a park located in the northern province of Chiang Mai. Here, this monstrous creature is seen with his testicles dangling below him, pulling him down as he struggles to carry them (fig. 7). 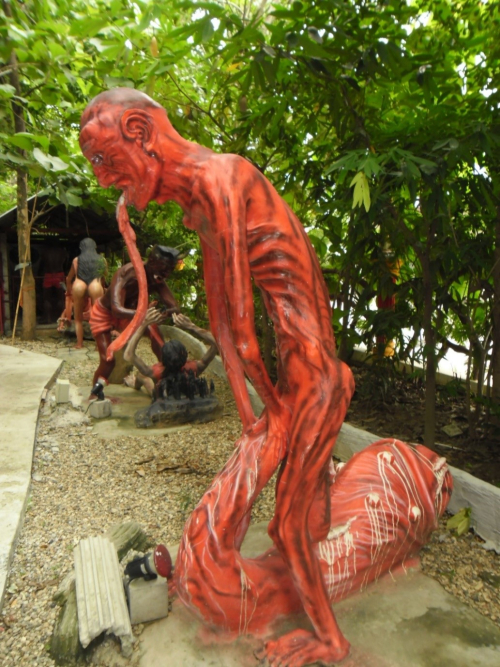 While the manuscript illustrations and their counterparts in the parks introduce a wide array of grotesque hell dwellers, the hellish backdrops also contribute to the Dantesque atmosphere, and help to convey some of the punishments that are inflicted in this horrid realm. Notable in the background scenery, both in the manuscripts and in the parks, are two images that have become widely associated with hells in the Theravāda tradition: the flaming cauldron and the towering thorn trees.

Let us begin with the cauldron. This horrific punishment is represented in Phra Malai manuscripts in two forms, each associated with a different hell. Thus, the cauldron scene in Or 14710 (fig. 6) portrays the punishment in the Lohakumbhī hell, where the denizens of hell are held by their feet and cast into these flaming iron cauldrons, which are as huge as mountains. Birth in this hell is the result of hurting monks or ascetics. 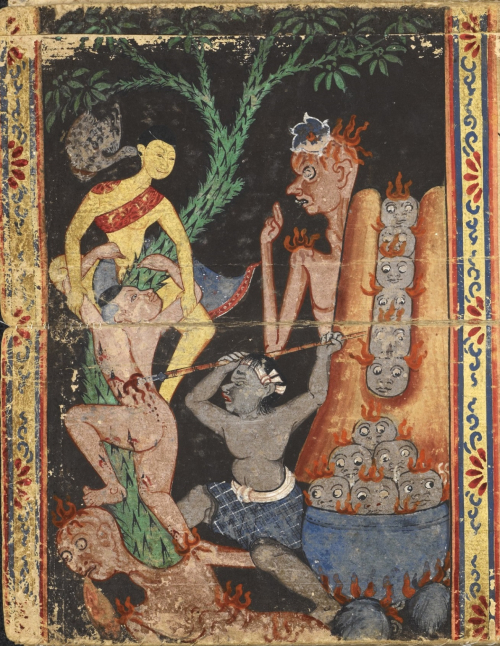 Fig. 8. Depiction of a cauldron with decapitated heads in a Phra Malai manuscript from central Thailand, 19th century. British Library, Or 16007, f.29

The cauldrons in Or 16007 (fig. 8) and Or 14664 (fig. 4) contain decapitated heads and represent yet another hell, the Lohakumbha. In this hell, the guardians chase the inhabitants of hell with flaming iron ropes, which they twist around their necks until their heads fall. They then insert the heads into the boiling cauldrons. Then, a new head appears on the hell dweller’s body and the torture is repeated again and again. This punishment is the result of killing living beings by slashing their throats.

In the parks, these cauldrons have also taken on a cautionary role relating to alcohol abuse. Similarly, in Wat Pal Lak Roi Park (fig. 9) in Nakhon Ratchasima, north-eastern Thailand, two cauldrons are situated amid the hell section of the park. One of these cauldrons depicts several hell dwellers being scorched within it. Next to the cauldron, there is an image of a female who is being forced to drink beer by a hell guardian. The second cauldron has an inscription on it that reads ‘Lost one’s way in liquor’. In reference to this imagery, the park’s booklet notes that “This is the fate of those who…drank alcohol, until they lose consciousness… he who drinks alcohol will be met by Yama’s squad… please stop! For your children, your wife, and for a good society.” 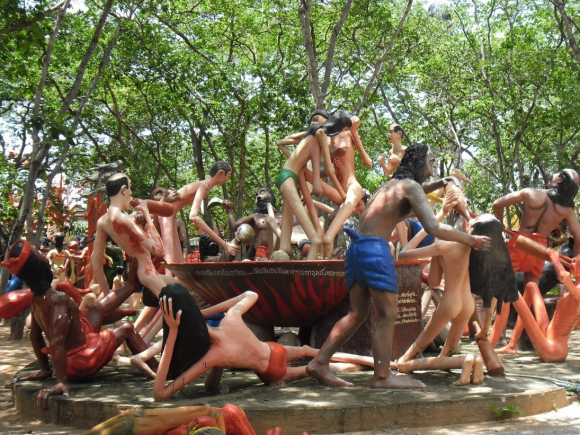 Another cauldron representation can be found at Wat Po Chai Sri (fig. 10), in the north-eastern province of Udon Thani. Here this hell is referred to as Narok Mo Tong Deang – literally, copper cauldron hell, and is also described as the destination for those who indulged in intoxicants. In addition, some denizens are seen being force-fed fiery melted copper, a punishment that is said to be inflicted in the Thamaphkata hell, which is indeed the destination of those who indulged in intoxicating beverages. 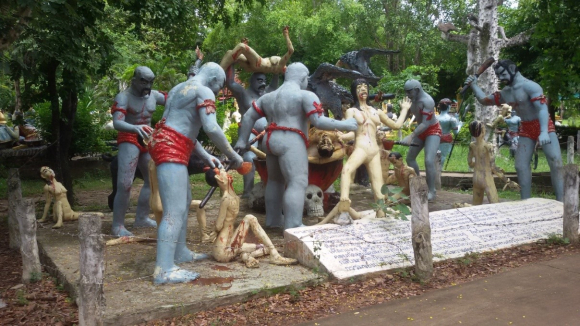 It is curious that the cauldron became recognized as a punishment for alcohol consumption. It is tempting to assume that this is a linkage constructed through the association with liquid; however, this is just a hypothesis.

Another famous image synonymous with the hells, can be found in Or 14838 (fig. 11), Or 14731 (fig. 12) and Or 16007 (fig. 8). In these daunting depictions, we are introduced to the hellish thorn trees, upon which the poor dwellers are forced to climb endlessly whilst being pierced by thorns, whilst being trapped between large dogs who bark at the stumps below and peckish crows who await at the tops. 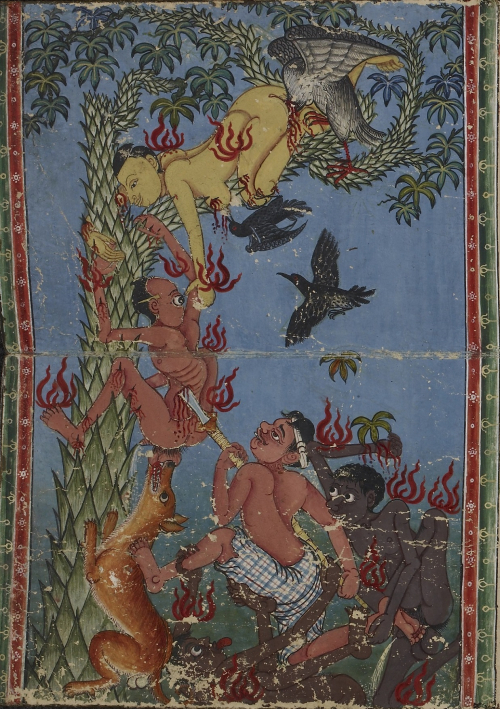 These trees can be found in the Lohasimbalī hell which is composed of a forest with countless trees. Somewhat misogynistic, it is the punishment inflicted on female adulterers who betrayed their husbands, or those who have had an affair with another man’s wife. 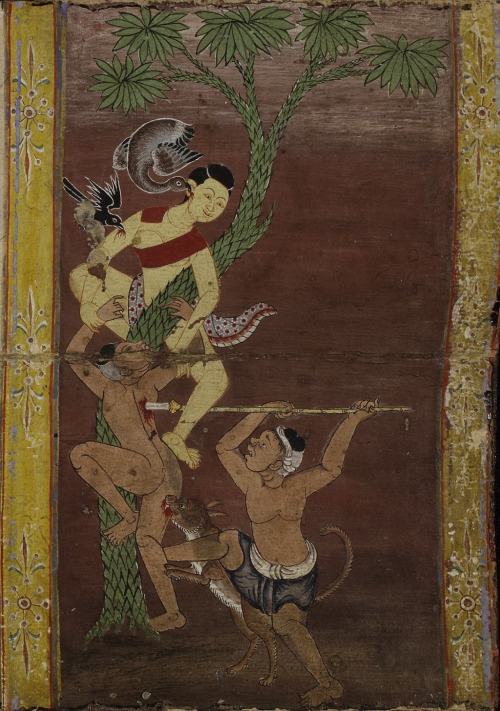 Fig. 12. Depiction of hell dwellers being chased up a thorn tree in a Thai Phra Malai manuscript, 19th century. British Library, Or 14731, f.4

These trees appear in Wat Santi Nikhom (fig. 13) in the northern province of Lampang. This park has a unique layout as it is situated vertically in a building that simulates the cosmos. The hell section is situated in the basement, creating the sense of descending into hell. Here the trees are scattered around the hellish area. Naked male and female inhabitants of hell are seen climbing them, while dogs wait for them at the bottom and crows at the top, as similarly seen in the manuscripts. Adding to all these visual effects, a sensory-operated recording of the dogs’ barks and the hell dwellers’ spine-tingling wails are played as visitors arrive in the area. 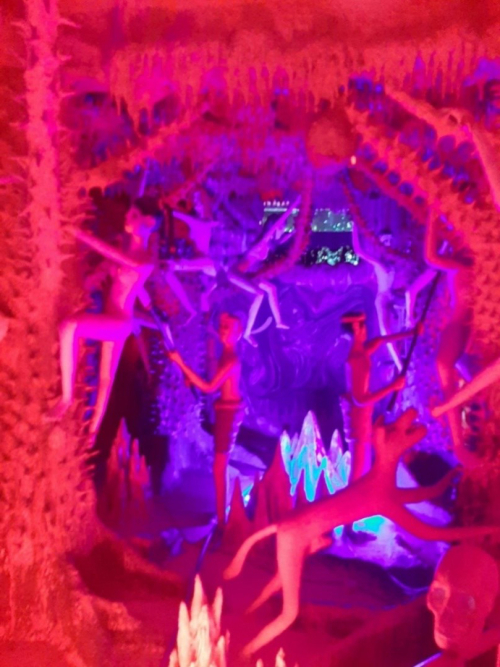 Whilst this is only a small glimpse into the rich imagery of Phra Malai’s journey to the hells, and its manifestation within contemporary cosmological parks, this account will hopefully shed light on how these imageries of the hells not only provoke thoughts about morality and mortality, but also support the relevance of these issues today, crossing both space and time.

Posted by Annabel Gallop at 1:31 AM