Stories of the Prophets: an illustrated Persian manuscript by Nishapuri 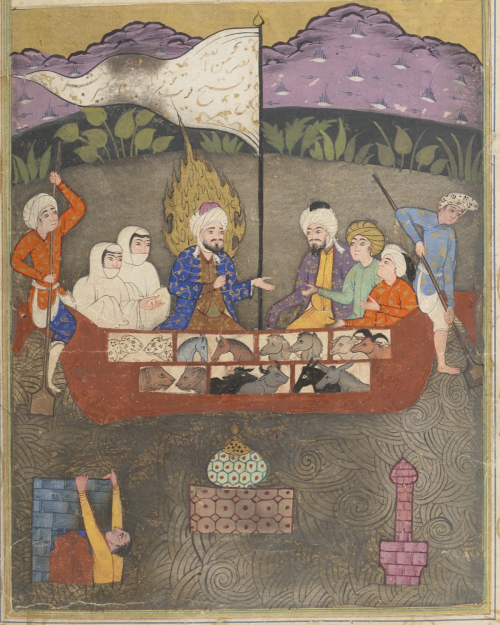 Tales of the prophets (Qiṣaṣ al-anbiyāʼ) form a popular literary genre based on stories adapted from the Qur’an and other Islamic literature. Since accounts of the prophets’ lives were often very sketchy in the Qurʼan itself, stories about them drew heavily on Jewish, Christian and above all on oral literature for details. Famous collections in Arabic, are Kitāb arāʾis al-majālis fī qiṣaṣ al-anbiyāʾ by the 10th to 11th century writer al‐Thaʻlabi (the British Library has one of the oldest copies of this manuscript, Or 1494 dated Jumada I, AH 513/1119) and al-Kisaʼi (active c. 1100). Another well-known collection from Central Asia was composed in Eastern Turkish Chagatai at the beginning of the 14th century by Nasir ibn Burhan Rabghuzi (see BL Add MS 7851 for a 15th century copy).

In Persian, one of the best-known and most illustrated collections was written by the 12th century writer Ishaq ibn Ibrahim Nishapuri. The British Library copy, Add. MS 18576, is one of fourteen known illustrated copies, all produced in Safavid Iran towards the end of the sixteenth century. It contains thirteen illustrations and was probably made up from two different manuscripts – copied in at least two different hands. Consisting of only 165 folios out of an original 229, it lacks the introductory frontispiece, a double spread illustration which typically might have depicted Solomon and Sheba on facing pages. Luckily the double-page finispiece (Fig. 2) is preserved at the end showing the presentation of the manuscript and a young prince reading while a banquet is being prepared. 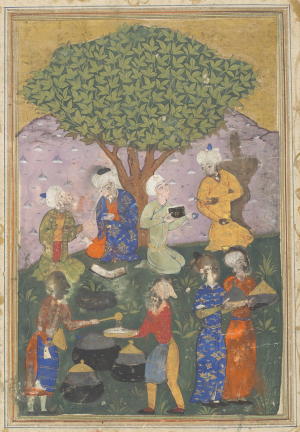 Fig. 2. Finispiece showing books being read and presented while a banquet is being prepared (British Library, Add MS 18576, ff. 164v-165r)

Many of the stories are common to the Bible and the Qurʼan. The first to be illustrated is the expulsion of Adam and Hava (Eve) from Paradise (Fig. 3). In this version of the story, Iblis (Satan) colluded with a peacock and a serpent (here depicted as a dragon) to tempt Adam and Hava to eat the forbidden fruit. After they had eaten, they lost their clothes, all their possessions and they were driven out. Despite their banishment, they still kept their prophetic status, represented here by the fiery haloes around their heads.

The next illustration (Fig. 4) tells the story of Adams’s sons Qabil (Cain) and Habil (Abel). In both the Bible and the Qurʼan, Cain murdered his brother out of jealousy when God rejected his sacrifice in favour of his brother’s. Not knowing what to do with a dead body — as this was the first time someone had died — he wandered around with his brother strapped to his back until God sent two crows, one of which killed the other and then demonstrated how to bury it in the ground. 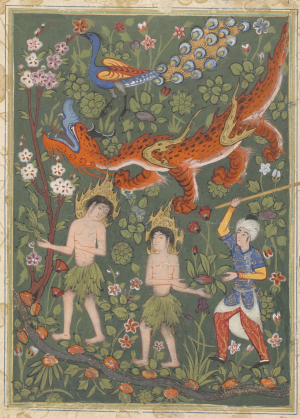 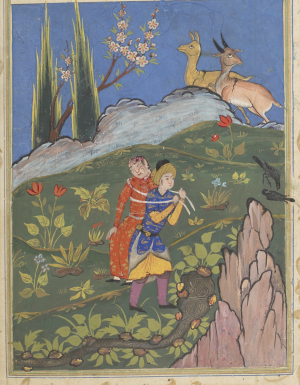 Another familiar story, equally well-known in both biblical and Qur’anic traditions, features Nuh (Noah) in his ark (Fig. 1). His ship is a simple flat-bottomed ship, guided by paddles at front and back, while in the foreground a drowning figure calls for help from the rooftops. Note Noah’s halo signifying his prophetic status and the ship’s flag quoting sura 61, verse 13 of the Qurʼan:‘Help from Allah and a victory near at hand. And give good news to the faithful.’ 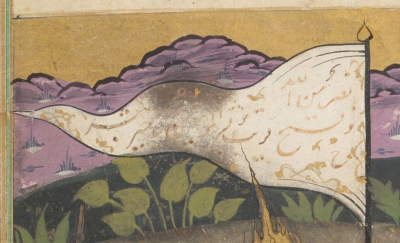 The story of Ibrahim’s sacrifice (Fig. 6) is one of the most frequently illustrated Qurʼanic stories. In the Bible, it is Abraham’s son Isaac who is saved from sacrifice by God offering a ram to take his place. In Islamic tradition it was Ismaʻil who was the intended victim. When Ibrahim tried to cut his son’s throat, the knife turned upside down in his hand, folded in two, and would not cut. When Ibrahim tried again, he heard a voice from Heaven telling him to look up and he saw the archangel Jibra’il descending with a ram in his arms to act as a substitute.

Equally popular is the story of Yusuf (Joseph) who features in thirteen different episodes in the Qiṣaṣ al-anbiyā’ (Fig. 7). Put on sale to the highest bidder at a slave-market in Egpyt, he was purchased by the Egyptian ʻAziz (Potiphar in the Bible), or in a more romantic version, by his wife Zulaykha. Here, however, we see an addition to the story in which an old woman, standing with a group of would-be buyers with their money-bags, offers in vain her only possession, a ball of yarn. 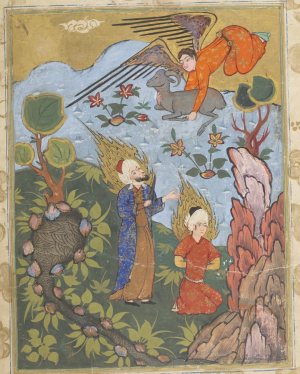 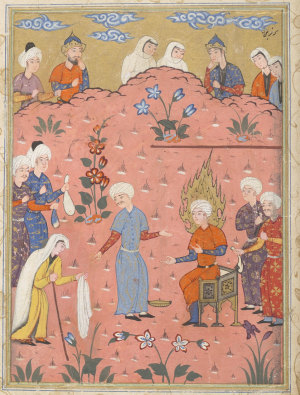 Two further stories, both well-known in Qurʼanic and biblical traditions are the tales of Yunus (Jonah) and the big fish (Fig. 8) and of the misfortunes of Ayyub (Job, Fig. 9). Yunus repented and prayed to Allah from inside the fish, while Ayyub remained faithful despite losing everything and suffering dreadful diseases. 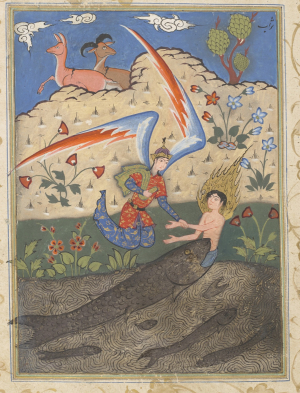 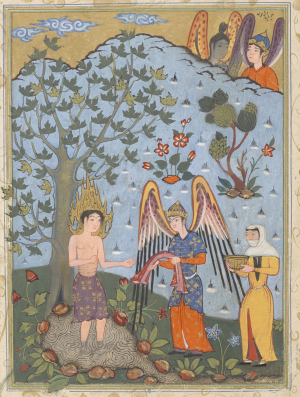 Other illustrations in this manuscript:

An additional striking feature of our manuscript is the beautifully preserved original Safavid binding (Fig. 10), typical of the period with its use of block-stamped gold and doublures with gilt fretwork over blue, red, green and black grounds. 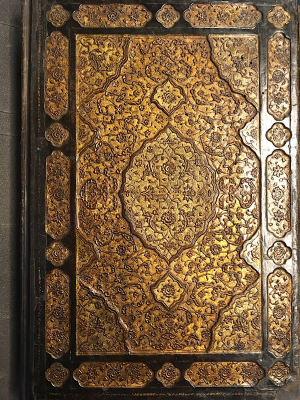 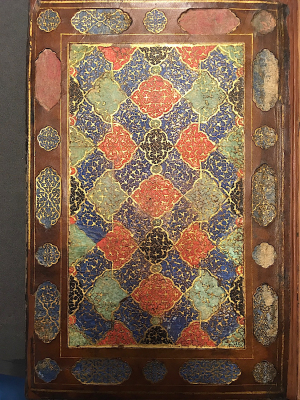 Unfortunately little is known of the former history of this beautiful copy. It was acquired from Sothebey’s on 13 March 1851, described, according to the sale catalogue[2]  as “The property of a gentleman leaving England,” one of a collection of books “connected with the fine arts.”