Translating Piracy: On the origin of the Arabic words qurṣān/qarṣanah


The terms pirate(s) and piracy feature heavily in India Office Records relating to the Persian Gulf during the nineteenth century. Many of these records have now been digitised through the British Library / Qatar Foundation partnership and can be accessed on the Qatar Digital Library accompanied by catalogue descriptions in English and Arabic. In these records, “piracy” was used to justify British naval presence in the Gulf, forming the basis of the early agreements signed with local tribal leaders. However, the Arabic versions of these agreements indicate that the Arab inhabitants of the region did not have an equivalent concept in their lexicon. So where did today’s Standard Arabic word for piracy come from? And why wasn’t it used in these agreements?

Modern Arabic dictionaries list the terms qurṣān (pirate) and qarṣanah (piracy) under the trilateral root Q-R-Ṣ, giving the impression that this is a true Arabic word derived from this root (which generally means ‘to pinch/sting’). In fact, some Arabic sources devoted to the subject of piracy define qarṣanah as a derivative of that root (see for example, Hamid 2016: 22). However, this is a common misattribution.

The term is actually a relatively recent addition to the Arabic language, and is a cognate of the English term ‘corsair’ from the Latin cursarius. The earliest Arabic dictionary to include qurṣān to mean ‘sea thief’ is al-Bustānī’s Muḥīṭ al-Muḥīṭ (1870), where it is listed as a plural noun and marked as ‘foreign’ (إفرنجية). Further clues can be found in Reinhart Dozy’s Supplément aux dictionnaires arabes (1877-1881) which includes colloquialisms and foreign borrowings in Arabic. Dozy lists قرصل ( qurṣul), قرصال (qurṣāl) and كرسالي (kursālī) in addition to qurṣān to mean both ‘pirate’ and ‘warship’, and he links them to Spanish (corsario) and Italian (corsale). Also listed are the now common forms qarāṣinah (pirates) and qarṣanah (piracy). 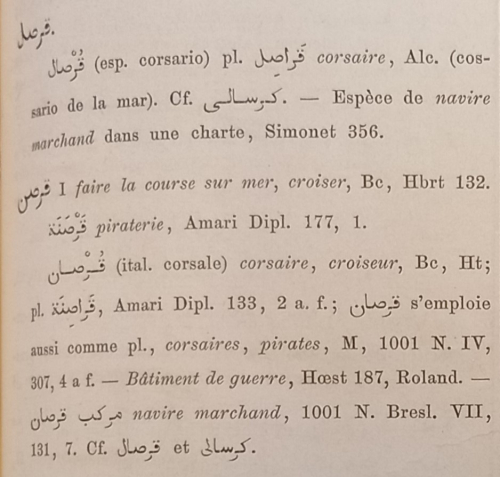 As a Semitic language, Arabic has a root-and-pattern morphology. Words are formed by casting (typically 3-letter) roots into a variety of templates to produce different meanings. In the case of the borrowed word for piracy, it was a happy coincidence that it could be filed under the existing root Q-R-Ṣ.

All this confirms that the words qurṣān and qarṣanah are of foreign origin, and that their meanings did not stabilise until modern times. One of the earliest attested uses of qurṣān in Arabic comes from a 1767 maritime treaty between the Sultan of Marrakesh, Muḥammad V (1710-1790) and the King of France, Louis XV (1710-1774). 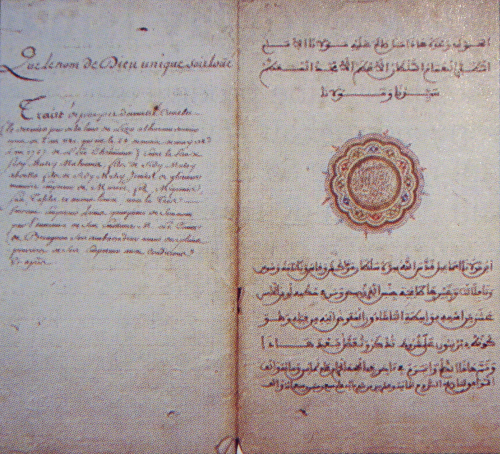 Image of the 1767 treaty signed between the Sultan of Marrakesh and the King of France. Public Domain.

Article 17 of the Arabic version begins:

Translation: If a qurṣān (of the qarāṣīn) of the French enters one of the harbours of the Mawlawī territory, the attending [French] Consul in the town must inform its governor so that he may take precautions over prisoners in the country to prevent them from fleeing to the aforementioned ship…

There is no doubt that qurṣān and qarāṣīn (pl.) refer to a type of ship in this context. Other parts of the treaty mention qarāṣīn flying the French flag and carrying French passports. While we can assume that qarāṣīn here means military rather than pirate ships, the line between piracy and naval warfare had been blurred in the Mediterranean for centuries. This is particularly clear in accounts of Ottoman Berber “pirates”, or the infamous “Barbary corsairs”. ‘A Sea Fight with Barbary Corsairs’ (after 1681) by Flemish painter Laureys a Castro. Public Domain.

Given these encounters, it is not surprising that the term qurṣān entered the Arabic language through North Africa. The Arab tribes of the Persian Gulf lived on the other side of the Arabic-speaking world, so this neologism would have taken time to reach them. When they entered into maritime treaties with Britain in the nineteenth century, there was no distinct word in their vocabulary to denote ‘piracy’ as something that is exclusively perpetrated at sea.

The final step in the accession of the term into Arabic came with the language standardisation efforts of the late nineteenth and early twentieth centuries, a period known as the Arabic nahḍah. This period saw a flurry of production of dictionaries that standardised the term qurṣān as a singular form meaning ‘sea thief’. Advancements in education, media, and transport networks across the Arabic-speaking world ensured the establishment and transmission of the term.

Along with the term itself, a stereotypical Western image of the pirate also spread into modern Arab culture. Ironically, this Western image was influenced by contact with Ottoman and Arab “pirates”. For instance, the character of Redbeard is based on the Ottoman “corsair” Baba Oruç (Barbarossa), while the characteristic eye-patch is inspired by the Qāsimī “pirate” Raḥmah bin Jābir al-Jalhamī. 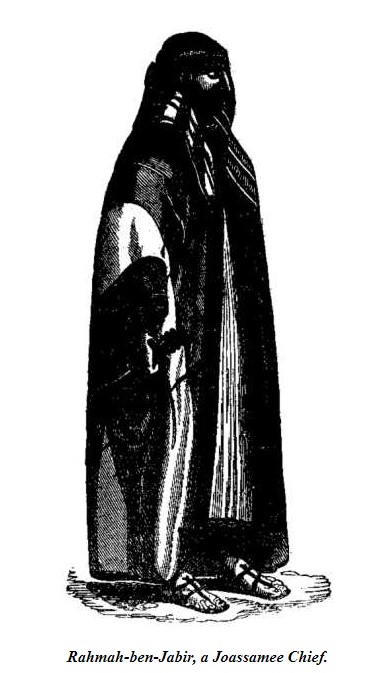 The British narrative of piracy has been challenged by writers from the region in recent years. Two notable examples are The Myth of Arab Piracy in the Gulf by scholar and ruler of Sharjah, Sulṭān Muḥammad al-Qāsimī, and The Corsair by Qatari journalist and novelist Abdulaziz Al-Mahmoud. The latter is a fictionalised account of the exploits of Raḥmah bin Jābir al-Jalhamī from an anti-imperial point of view. Its original Arabic title is al-Qurṣān. Even where the narrative is challenged, its language has stuck.

In the modern world, the term “piracy” has come to stand for so much more than aggression at sea, and the Arabic term qarṣanah has evolved in tandem. An example of this is the now commonly used expression ‘pirated films’ and its Arabic equivalent alflām muqarṣanah أفلام مُقَرْصَنَة. 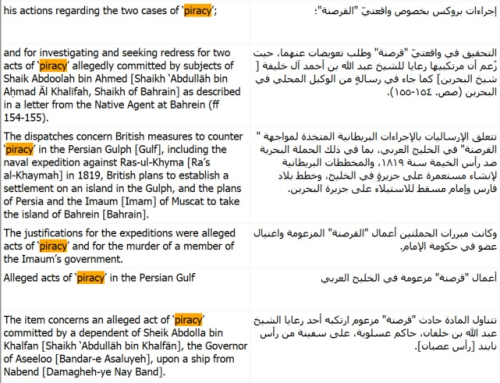 Screenshot of concordance results for the term piracy and its translation in memoQ, the translation management system used by BL/QFP translators.

As BL/QFP translators, wherever the English term piracy appears in catalogue descriptions, we translate it using the now established Modern Arabic word qarṣanah. However, this does not reflect historical usage and it is unlikely that the nineteenth-century Arab inhabitants of the Gulf would have heard this word, let alone used it.

London, British Library, 'File 2902/1916 ‘Treaties and Engagements between the British Government and the Chiefs of the Arabian Coast of the Persian Gulf’' IOR/L/PS/10/606. Qatar Digital Library [accessed 23 June 2022]