Alexander the Great: The Making of a Myth

Readers may have noticed the new placards and billboards at the British Library announcing Alexander the Great: The Making of a Myth which opens exactly four weeks today. Son of Philip II of Macedon and his wife Olympias, the historical Alexander was born in Pella, capital of Macedon in July 356 BC. By July 330 BC he had defeated the Persian army, becoming, at the age of twenty-five, ruler of Asia Minor, pharaoh of Egypt and successor to Darius III, the ‘Great King’ of Persia. During the next seven years, Alexander created an empire that stretched from Greece in the west to beyond the Indus river in the east – before his early death in Babylon aged thirty-two. 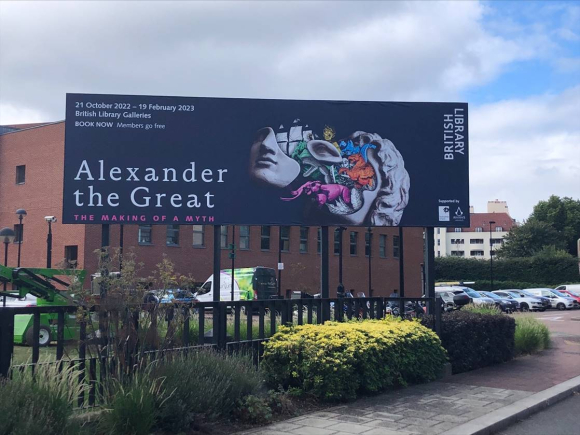 This exhibition, however, is not about history, but the first of its kind to explore 2,000 years of  storytelling and mythmaking. With objects from 25 countries in 21 languages, it shows how one figure could serve so many purposes, creating shared narratives of universal appeal. The Alexander Romance, composed originally in Greek in the third century AD, was at the heart of this storytelling. But legends also found their way into epic poetry and drama, and more recently into novels, comics, films and video games. You will see examples of all of these in the exhibition.

Out of approximately 140 objects, some eighty-six are from the British Library's collections. To give a taste of what’s in store, I have chosen to highlight a few of the thirty-eight exhibits from our own Asian and African collections. 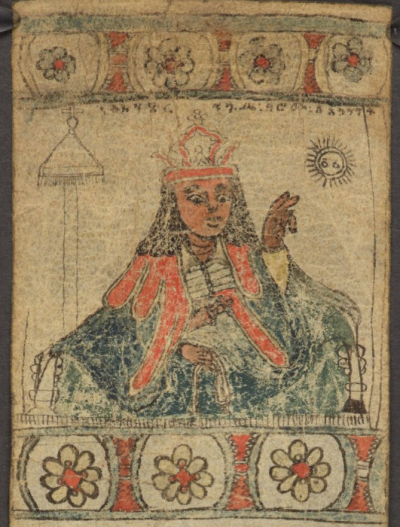 A Christian Alexander described as ‘enemy of devils’ heads this amulet scroll in the Ethiopian Ge‘ez language. Ethiopia, 18th century? (British Library Or.12859)

The exhibition is arranged in six sections based around Alexander’s legendary life. After an introduction,  A Conqueror in the Making explores the different versions of Alexander’s origins, his education by the philosopher Aristotle and Bucephalus, his faithful warhorse. 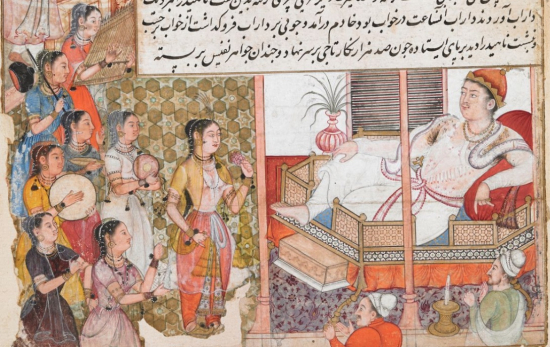 Nahid, daughter of Philip of Macedon, is here married to the Persian emperor as part of a diplomatic alliance. Rejected on account of her bad breath, she was sent home, unknowingly pregnant, to Greece where she gave birth to a son, Alexander. This version of Alexander’s origins saw him, in Persian eyes, as the legitimate heir and successor to the throne. From the Darabnamah (Story of Darab), by Abu Tahir Muhammad Tarsusi, Mughal India, 1580–85 (British Library Or.4615, f. 129r) 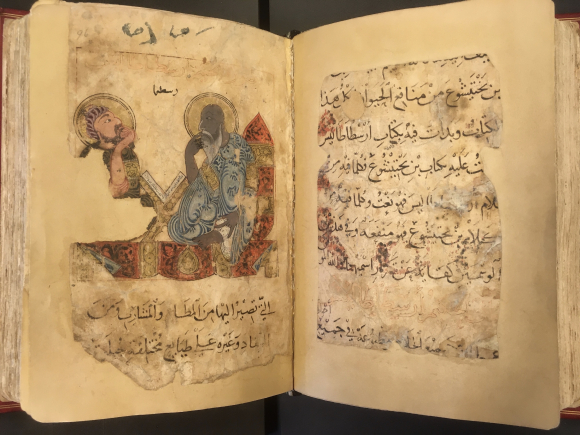 Aristotle instructs a pupil in the Kitab na‘t al-hayawan (On the Characteristics of Animals). Baghdad?, about 1225 (British Library Or.2784, f. 96r)

Section three, Building an Empire, describes Alexander’s victory over Darius III of Persia and his expeditions further east to India and China — by the way Alexander did reach India but he never went to China! 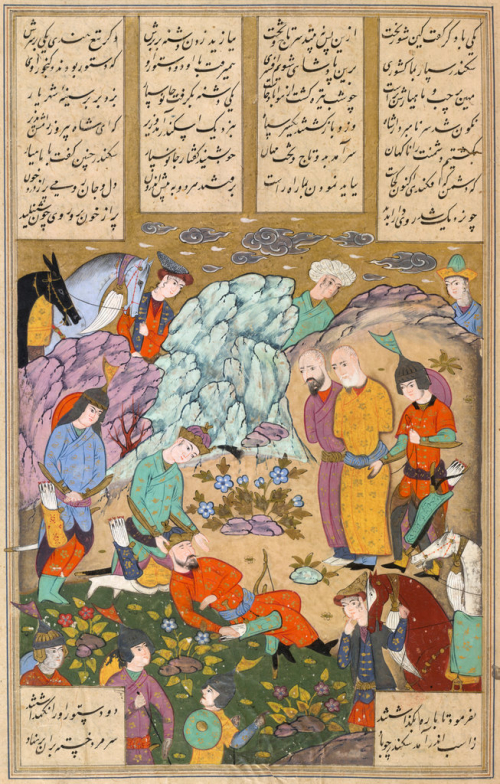 Alexander comforts the dying Darius and agrees to his final requests in Firdawsi’s Shahnamah (Book of Kings). According to one Persian tradition, Darius was in fact his half-brother. Isfahan?, Iran, 1604 (British Library IO Islamic 966, f. 335r) 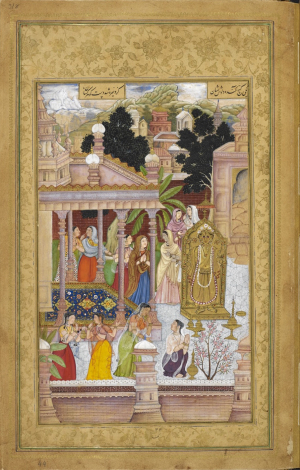 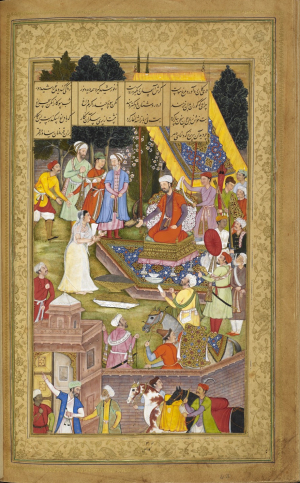 In Kandahar, Alexander was persuaded by a beautiful priestess not to destroy the sacred statue. This copy of the twelfth-century poet Nizami’s Khamsah (Five Poems) was especially commissioned by the Mughal Emperor Akbar who had conquered Kandahar in 1595 while this manuscript was still being copied. The painting would have deliberately invited comparison between Akbar, famous for his religious tolerance, and Alexander. Artists: Mukund and La‘l, Lahore, 1593–95 (British Library Or.12208, ff. 317v–318r)

In a section on Alexander’s relationships, we introduce the important people in his life: his wives, the powerful women he encountered, his general Hephaestion and the eunuch slave Bagoas. 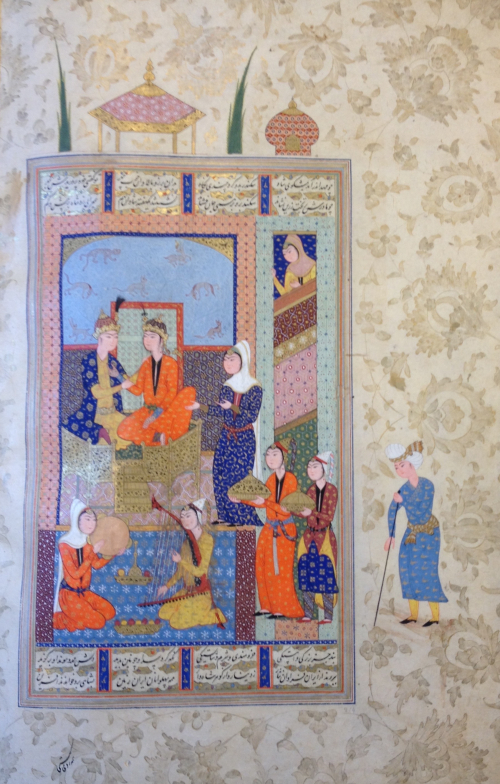 The Mythical Quest is the most fantastical section. Here Alexander travels through strange lands inhabited by people with faces in their chests, sirens, griffins and dragons. His journey leads him to the ends of the earth, into the skies above and to the bottom of the ocean, always seeking new experiences and the key to immortality. 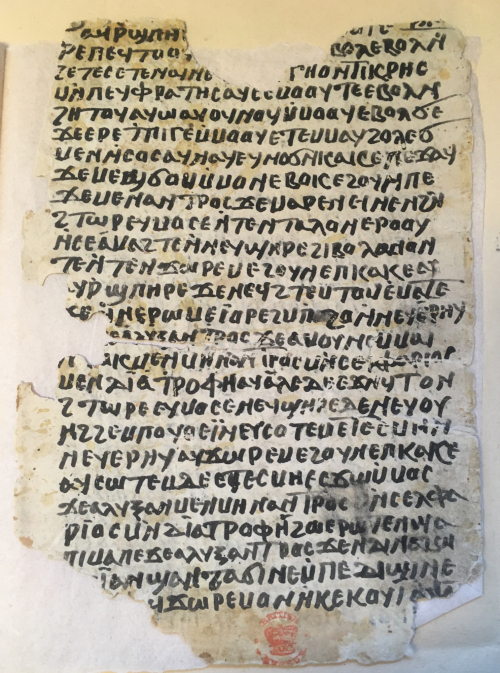 This Coptic fragment of the Alexander Romance describes Alexander setting off to explore the Land of Darkness. When a mysterious voice predicted his imminent death, he turned back bringing with him some objects he had gathered in the dark. These later turned out to be diamonds. Atripe, Upper Egypt, 14th century (British Library Or.3367/2)

The final section, Journey’s End, describes Alexander’s return to Babylon and the mystery of his subsequent death. His body was transported on a magnificent carriage to Egypt, where it was eventually placed in a mausoleum at Alexandria. The tomb is now lost, but his final resting place is still a subject of debate. 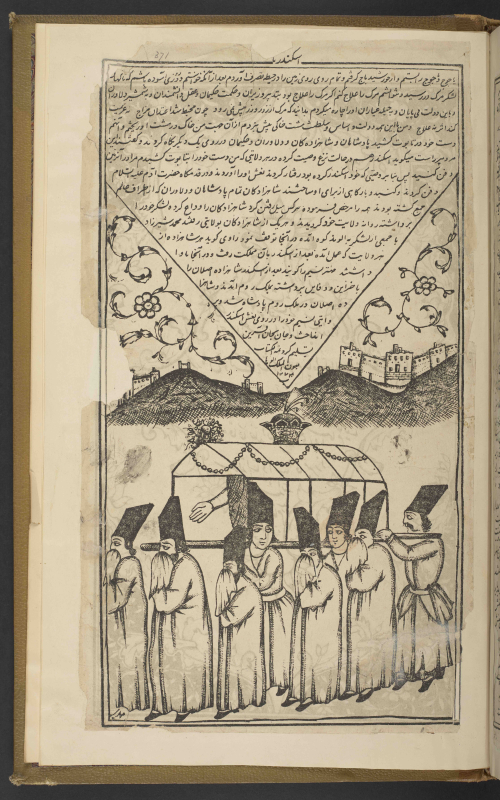 This popular prose version of Alexander’s life reflects a Persian tradition. In accordance with his final wishes Alexander’s coffin was carried through his dominions with his arm hanging loose to show that he travelled to the grave empty-handed. From the Iskandarnamah (Story of Alexander) by Manuchihr Khan Hakim, Tehran, 1857–58 (British Library 14787.k.8)

Alexander the Great: The Making of a Myth opens on 21 October. It will be accompanied by a book of the same title. Edited by Richard Stoneman, it includes nine essays by leading scholars together with images and descriptions of the exhibition items. During the next few months we’ll be writing blogs about several of the items in the exhibition, and also some which we were not able to include. Meanwhile tickets are already on sale and may be booked on our Events page.