The Story of Inabe no Suminawa: Master Craftsman of Hida

Classic literature often brings us the most surprising storylines. We are fascinated by the things which people in the past imagined, and which gave rise to highly entertaining stories as a result. We have previously looked at a story which could be said to be the earliest example of Science Fiction - The Tale of Bamboo Cutter, in a 2014 blog post.

Today, we are going to talk about another story with a Science Fiction flavour, about an inventor who was a master craftsman and who produced some ingenious and astonishing devices. 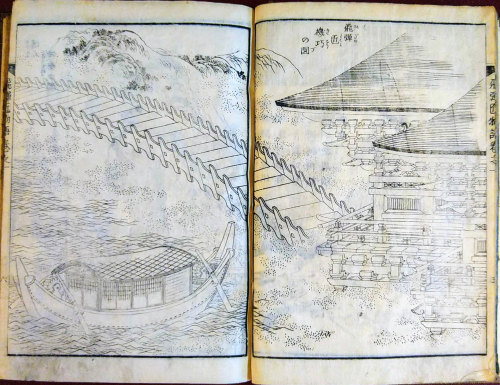 The first edition of the Story of a Hida Craftsman (飛騨匠物語, Hida no Takumi monogatari) was published in 1808, written by Ishikawa Masamochi (石川雅望 1754-1830) and illustrated by Katsushika Hokusai (葛飾北斎 1760-1849). The very well-known names of these two creators most probably gave readers of the time considerable expectation of an enjoyable read.

There is no doubt that Hokusai was a master artist of Ukiyoe (浮世絵), who could capture anything from humorous moments to the wonders of nature. Ishikawa Masamochi was well-known under the name Yadoya no Meshimori (宿屋飯盛), literally ‘a person serving meals at inns’, as a professional composer of kyōka (狂歌), a form of short poem which contains a twisted sense of humour. His most famous kyōka was a pun on a line in the preface of the Kokin wakashū (古今和歌集), an early classic imperial anthology of waka (i.e. poetry written in Japanese rather than Chinese). 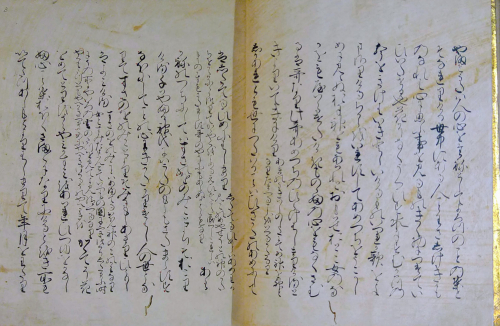 The preface was written by Ki no Turayuki (紀貫之, fl. 866-872), one of the most respected literary figures in Japanese history. He defined the quintessence of poems composed and written in the Japanese language. It opens with the line やまとうたは、人の心を種として、万の言の葉とぞなれりける ‘Japanese poetry has the human heart as seed and myriads of words as leaves’. The lines continue, 力をも入れずして天地を動かし ‘the sprits of Japanese poems could stir even Heaven and Earth’.

Ishikawa’s pun on this line is:

Poets here, Poets there,
When worst I love them most,
The least stirs Heaven and Earth I swear
The versifying host. 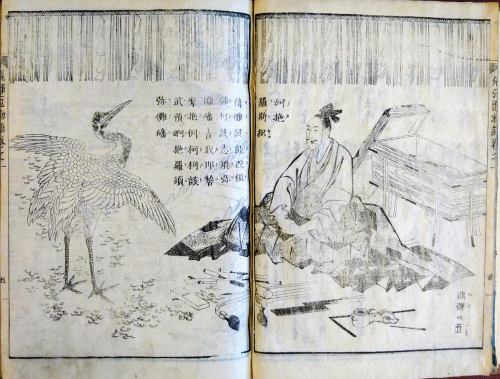 Suminawa has just finished work on a wooden crane. His tools are placed on his right, and his toolbox is behind him.
(Ishikawa Masamochi (石川雅望) and Katsushika Hokusai (葛飾北斎), Shinpan Hida no takumi monogatari (新板飛弾匠物語). wood block prints, 衆星閣蔵版c. 1840s. 16055.a.7)

The opening of the Story of a Hida Craftsman is a short poem dedicated to the hero Inabe no Suminawa (猪名部墨縄):

This is the story of a particularly skilled craftsman, Suminawa, already famous for his distinguished talent at the start of the book. His woodwork is very life-like: for example, a live rooster cannot stop challenging his carved one to a fight. He is also an inventor of fascinating devices.

Suminawa sets off on a journey to Mount Hōrai, believed to be the mystical mountain in East Asia where the immortal Daoist sages dwell. He receives tuition from them in the arcane art of crafting to further heighten his already considerable skills. After leaving Mount Hōrai, he gets to know a young man who is unable to win his love because, as a mere commoner, he cannot consort with a princess of high social rank. Suminawa successfully fosters true love between the young couple by the subtle use of his ingenious devices. Eventually the three of them become immortal sages of Mount Hōrai.

Now the question is, why does the hero need to be a craftsman from Hida and why is his name Suminawa?

Perhaps the author of the story, Ishikawa Masamochi based his homage on a poem in the Man’yōshū (万葉集 literally the ‘Collection of Ten Thousand Leaves’) the oldest anthology of Japanese waka poetry, believed to be have been compiled towards the end of the Nara Period (710-794 CE).

Unwandering, my thoughts, like the line-markers of the Hida craftsmen, run straight to you.

Hida province, nowadays, part of Gifu prefecture, is perhaps the most mountainous area in Japan with extremely limited flat spaces. Geographically, it is thickly covered with forest, not suitable for rice farming. Therefore, it was a traditional choice for people in Hida province to become woodworkers, such as carpenters, architects, etc. Hida craftsmen, and they were only men, have a long history and pride in their work, and it is likely that the author intended his hero to be one of these Hida craftsmen to convince readers he was already famous for his skills before his training on Mount Hōrai. The Hida craftsmen were exempted from taxes in the more conventional form of rice or textiles, and instead sent some of their number to the capital to build city buildings, temples, streets and the palace for the emperor. 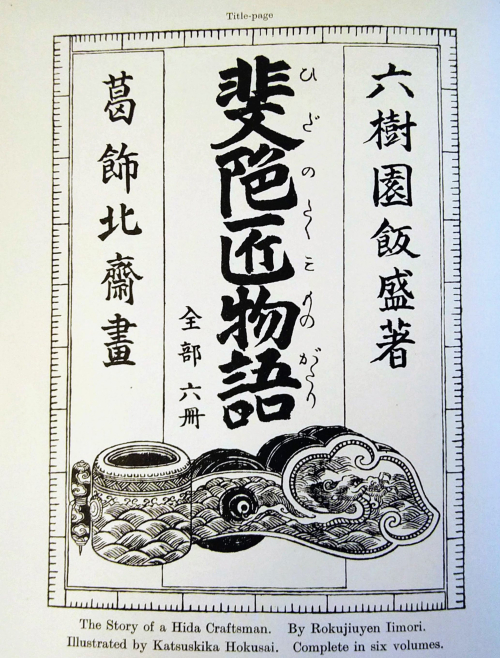 The name of the hero, Suminawa (墨縄) appears in this particular waka from the Man’yōshū. A suminawa is an ink dipped cord attached to an ink pot called a sumitsubo (墨壺). The sumitsubo was an essential piece of equipment for craftspeople to mark a straight line. The sumitsubo had an ink pot with a reel attached through which a cord was threaded. A straight line was drawn by paying out the ink-soaked cord across a length of wood and snapping it to leave an inked line across the desired section.

Ishikawa Masamochi did not make it clear in the preface of the book whether he had drawn his inspiration from the waka in the Man’yōshū. However, we can note that, at the opening of the story, the short poem praising Suminawa was written in Manyōgana, the script that Japanese wrote in during the Nara period and which is used in the Man’yōshū.

The spirit and highly accomplished skills of Hida craftsmen continue throughout history, from ancient times when Nara was the Japanese capital, through the Edo Period, up to the present day, and will undoubtedly continue into the future.

The talents and living traditions of the craftspeople of Hida are highlighted in the exhibition The Carpenters’ Line: Woodworking Heritage in Hida Takayama being held at  Japan House London, 01-111 Kensington High Street, London, W8 5SA, 29 September 2022 – 29 January 2023.

With special thanks to Mr Stephen Cullis, Lecturer at Nagasaki University of Foreign Studies, for his English translation of Man’yōshū book XI 2648.