Alexander the Great in Firdawsi's Book of Kings

The legendary life of Alexander the Great is the subject of the British Library’s new exhibition Alexander the Great: The Making of a Myth which opened on Friday 21 October. A visual feast of stories spanning more than 2000 years, it centres on the Alexander Romance originally composed in Greek around the third century AD and shares narratives from East and West side by side in more than twenty languages.  One of the most richly illustrated sources is the Persian Shahnamah (Book of Kings) completed by the poet Firdawsi in 1010 AD. There are no less than fourteen copies of this national epic in the exhibition ranging from the beginning of the fourteenth to the mid-nineteenth centuries. A selection of these is shown below. While the details sometimes differ from the Alexander Romance, the Shahnamah tells the same stories in a common context.

The history of Alexander in the Shahnamah begins with a peace treaty between King Darab of Persia and Filqus (Philip) of Greece in which Filqus’ daughter Nahid is married to the Persian king. Though she outshone all others in her beauty, she proved to suffer from bad breath and the marriage broke down irretrievably. Nahid was sent home to her father, rejected, but unknowingly pregnant with Alexander (Iskandar or Sikandar in Persian) who was subsequently brought up as Philip’s son and heir. Meanwhile King Darab took another wife who gave birth to Dara (Darius) who would succeed his father before being ultimately defeated in battle by his half-brother Alexander. 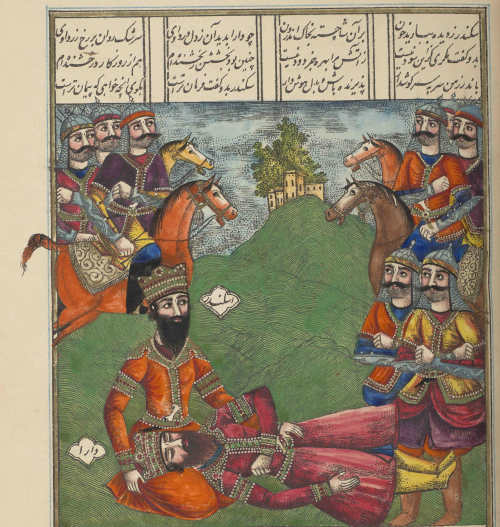 The death of Dara, one of the most frequently illustrated subjects in the Shahnamah, in a hand-coloured lithograph edition published in Bombay in 1849.  British Library, 14807.h.4

Three decisive battles took place in the last of which, at Gaugamela in northern Iraq in 331 BC, the Persian army was irrevocably defeated. Dara escaped but was mortally wounded by two of his own men. Iskandar, who had wanted Dara alive, was dismayed when he found him. Cradling Dara’s head on his knees, he promised to fulfil Dara’s dying wishes: to look after his family, to marry his daughter Roshanak (Roxana) and to safeguard the Zoroastrian religion.

Indeed Iskandar married Roshanak with much pomp and ceremony and then moved on to India where he conquered King Kayd of Hind by peaceful means. As part of their agreement he received four gifts: King Kayd’s daughter in marriage, his all-knowing seer to advise him, his physician who could cure any disease and his never-emptying goblet. 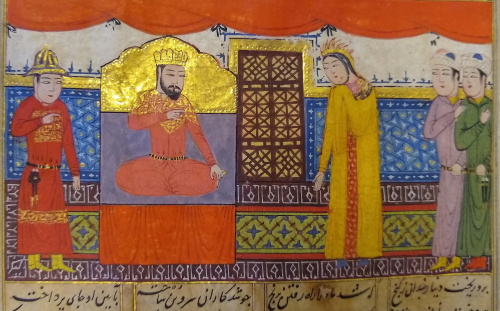 Moving on, Iskandar challenged another Indian ruler, King Fur (Porus). On this occasion a fierce battle took place. Iskandar had been forewarned about Fur’s invincible army of elephants and to counter them, recruited more than 1200 blacksmiths who forged 1000 iron horses and riders on wheels. These were filled with oil and set alight at the head of the advancing army. The whole army was put to rout leaving Iskandar to kill Fur in single combat. From India Iskandar travelled in search of riches and new experiences. He went to Mecca, Egypt and Andalus — in this context most likely a city in western Asia representing  ‘the West’— where he encountered Queen Qaydafah (Candace in the Greek Alexander Romance). Iskandar approached her court disguised as a messenger, but she already had a portrait of him and so immediately recognised him. His deception exposed, Iskandar feared for his life, but instead was admonished and sent safely on his way. A similarly peaceful encounter took place with the Amazons, the virgin warriors of Harum, located in the Caucasus. 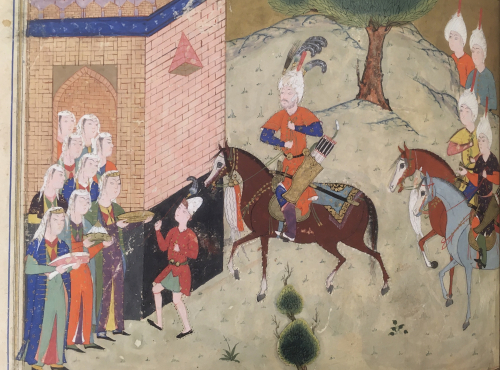 Travelling further Iskandar encountered the philosophical Brahmans, people with heads on their chests and without bones, dragons and all manner of mythical creatures. He fought battles in China and against the Russians, and constructed a wall to contain the barbarous peoples of Gog and Magog. 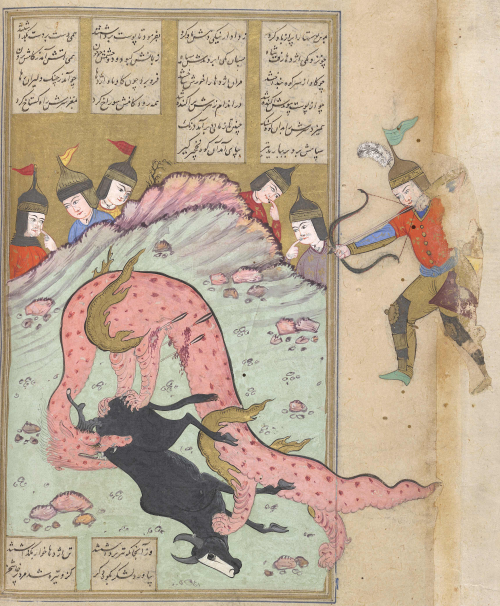 Increasingly, however, Iskandar became pre-occupied with his own mortality. Would he ever see his native land again, when would he die? Seeking, but never finding, the waters of everlasting life he met the angel of death Israfil who told him his time would come. Then at the edge of the world he came to the talking tree which had two trunks, one male and one female. At midday the male trunk spoke, foretelling the end of his fourteen-year rule, and at nightfall its female counterpart announced: ‘Death will come soon.’ 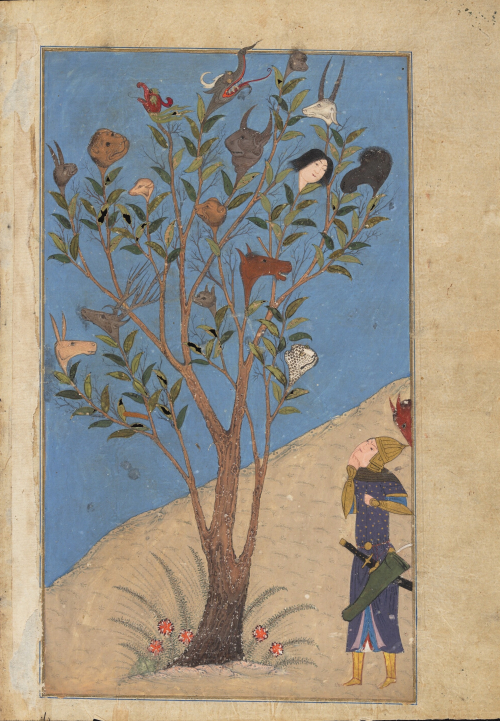 Now at the end of his journey, Iskandar returned to Babylon where he was greeted with more omens of death: a stillborn child with a lion’s head, a human chest and shoulders, and a cow’s tail and hooves. 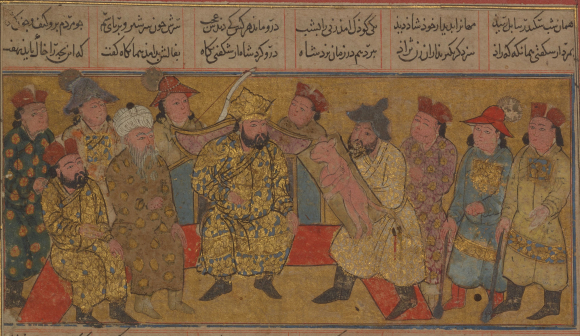 His fate sealed, Iskandar fell ill that very day. He ordered that he should be carried outside and in full view of his soldiers he advised them to live humbly and follow his example. As depicted below, a physician takes his pulse while another is making notes. In the background courtiers and soldiers wipe away their tears. 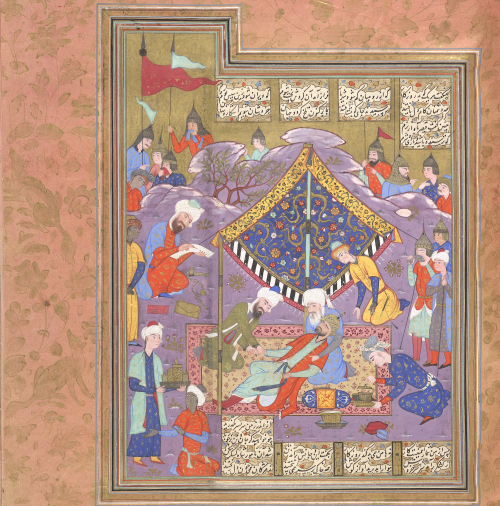 Alexander the Great: The Making of a Myth runs until 19 February 2023. It is accompanied by a book of the same title. Edited by Richard Stoneman, it includes nine essays by leading scholars together with images and descriptions of the exhibition items. Tickets are on sale and may be booked on our Events page, and more information can be found on our dedicated exhibition website.

Posted by Ursula Sims-Williams at 8:49 AM