An Early Modern Khavarnamah from Bijapur

This week’s post is by guest writer Namrata B. Kanchan, PhD candidate at the University of Texas at Austin. Her dissertation examines the courtly Dakhni literary and manuscript culture between 1500 CE and 1700 CE.

One of the most ambitious illustrated manuscript projects of the seventeenth-century ʻAdil Shahi court of Bijapur is the British Library manuscript IO Islamic 834, the Khavarnamah (Book of the East) written in the local vernacular of Dakhni in the nastaʻliq script. Originally composed in Persian by the poet Ibn Husam and completed in 1426 CE, this epic masnavi (narrative poetry), details the heroic exploits of the Shi‘a Imam ‘Ali, the son-in-law of the Prophet Muhammad. Like Firdausi’s epic Shahnamah (ca. 970-1010), various copies of the Persian Khavarnamah (usually called the Khavarannamah) were richly illustrated. In general, it was Shi‘a patrons who commissioned copies of this work across the Persianate world. 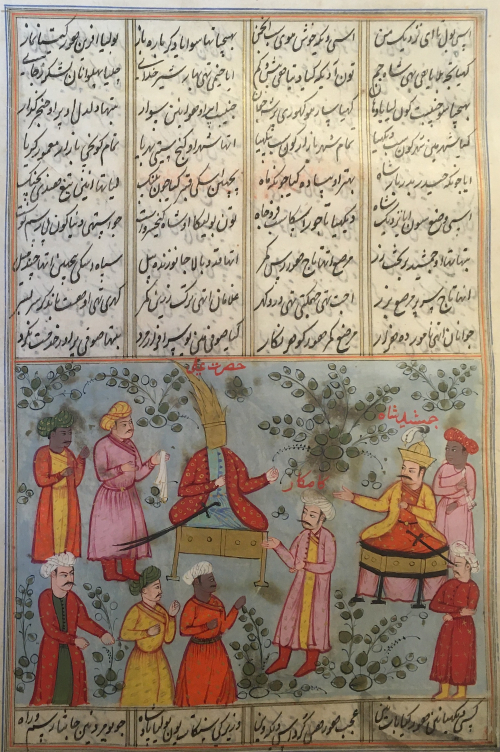 In Bijapur, Sultana Khadija (d. 1688), the wife of Sultan Muhammad ʻAdil Shah (r. 1626-1656) and the daughter of Golconda’s Qutb Shahi king Muhammad Qutb Shah (r. 1612-1626) commissioned the illustrated manuscript in the Deccan in the early half of the seventeenth century. She diverged, however, from the previous manuscript tradition by commissioning the poet Kamal Khan “Rustami” to compose the work in the regional vernacular language Dakhni, a regional form of Hindavi, instead of Persian. 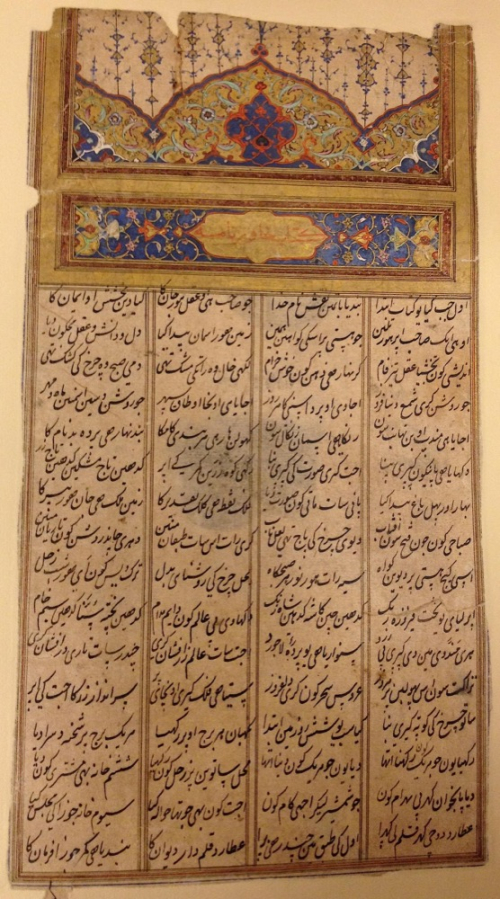 Rustami emerges as an important poet with deep connections to the Bijapur court. In the Khavarnamah’s epilogue, the poet provides a brief biography in prose where he states that he had descended from a long line of  ʻAdil Shahi courtiers and his father, Ismaʻil Khattat Khan had also served the Bijapur rulers. After assuming the pen-name of Rustami, the poet composed several ghazals (odes) and qasidahs (panegyric) in Dakhni and Persian.

One reason for the choice of vernacular in this manuscript is that by the early seventeenth century, Dakhni had become a popular literary language especially in the narrative genre of the masnavi. Moreover, previous Dakhni poets, often multilingual ones like Rustami, attempted to elevate the status of this vernacular by translating or refashioning works from the translocal Indic and Persian literary spheres. The Dakhni Khavarnamah forms part of this effort. Thus, the translation of an illustrated Shi‘a epic, evinces an endeavour to showcase Dakhni as a serious literary language and Bijapur as a major Shi‘a domain. 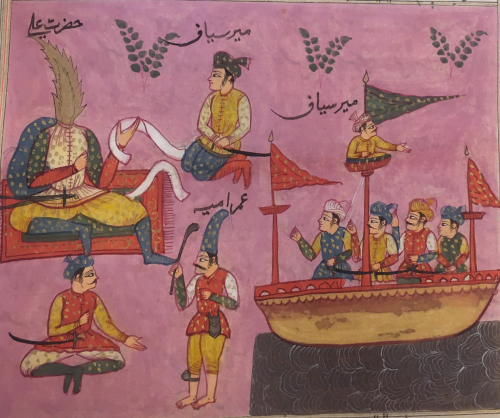 Apart from the choice of language, this original source manuscript is unique for several reasons. Sultana Khadija, also known as Bari Sahib (grande dame), is the first known female patron of a Dakhni work. Apart from the commission of the Khavarnamah, two seals connected with her appear on a Kalila va Dimnah manuscript (Acc. no. 71.187), housed currently at the National Museum, New Delhi (Akhtar, p. 44 and following plate). While one is unquestionably Sultana Khadija’s seal and carries her name, the second, reading Allah Muhammad ʻAli is identical to that in the British Library Khavarnamah and is possibly another of her seals, an expression of her religious belief. 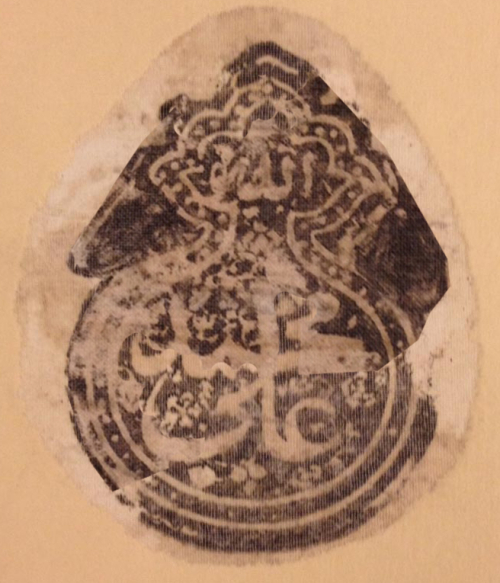 A vital player in Adil Shahi politics, Sultana Khadija was economically independent and one source of her income was the revenue she received from a coastal province, which also included a Dutch-operated factory in Vengurla (Kruijtzer, p. 231). In 1656, she assumed the position of regent for her son when her husband died. As regent, she controlled court politics and had dealings with the Dutch on India’s east coast as well as the Portuguese on the west coast. Once her regency ended in 1661, she wrote to the Dutch to undertake a trip to Mecca for Hajj and found place aboard a ship travelling west. She also embarked on a trip to visit holy Shi‘a pilgrimage sites and allegedly died in Yemen in 1688 (Kruijtzer, pp. 231-2).

A distinctive feature of this monumental manuscript (543 folios measuring 14 x 11 inches) is that it is richly illustrated with images on practically every page with some illustrations occupying the whole page. Depicted in rich and vibrant hues that are characteristic of the Deccan, these images illustrate the various adventures and heroic deeds of Hazrat ‘Ali and his companions Malik and Abu al-Mihjan. 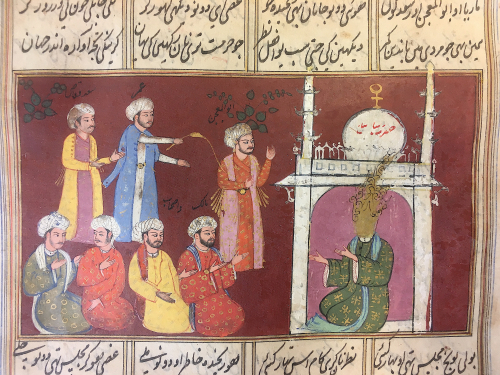 An interesting observation is that ‘Ali’s face is veiled consistently throughout this manuscript although most other copies of the Khavarnamah chose not to conceal his face (f. 75 r.). This is evident from a near contemporary copy of the manuscript in Persian at the British Library (BL Add. 19766). 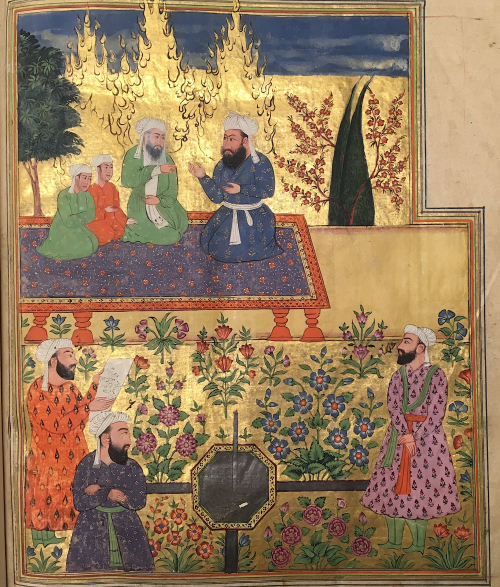 The Prophet with ‘Ali, Husain and Hasan in Paradise. ‘Uthman, ‘Umar and Abu Bakr in the foreground. From the Persian Khavarannamah by Ibn Husam, Punjab, 1686 (British Library, Add MS 19766, f. 362v).

Furthermore, just as the text emerges in the local Dakhni form, some of the images also carry a local flavour that depict encounters with yogis and Hindu kings. The Bijapur Khavarnamah’s scale and illustration programme thus attest to the popularity of Dakhni literature in the seventeenth-century Deccan sultanate courts. Furthermore, the patronage of this manuscript perhaps could also be interpreted as an act of Shi‘a piety. It would be interesting to compare this manuscript to other copies of the Persian Ḳhavarnamah to see either similarities or points of divergence in the narrative structure and illustrative programme.

I would like to thank Ursula Sims-Williams for providing important insight into Khadija Sultana’s seals and for identifying the seal in the Khavarnamah with the one in the National Museum.

Namrata B. Kanchan,  University of Texas at Austin