Verhandelingen: a rare 1816 issue of a periodical printed in Java

The Bataviaasch Genootschap van Kunsten en Wetenschappen, or Batavian Society of Arts and Sciences, was established in Batavia in 1778. Founded by the botanist Jacob Radermacher, the Bataviaasch Genootschap is the oldest learned society in Asia founded by Europeans. After a failed attempt to gain the patronage of Stadtholder Willem V (1748–1806; William V, Prince of Orange), the governors of the BG focussed their attentions on their publication Verhandelingen van het Bataviaasch Genootschap der Kunsten en Wetenschappen, ‘Transactions of the Batavian Society of Arts and Sciences’.  They envisaged Verhandelingen as a vehicle for building an academic reputation in Holland and more widely in Europe, modelling themselves on the Hollandsche Maatschappij der Wetenschappen (Dutch Society of Sciences) in Haarlem. 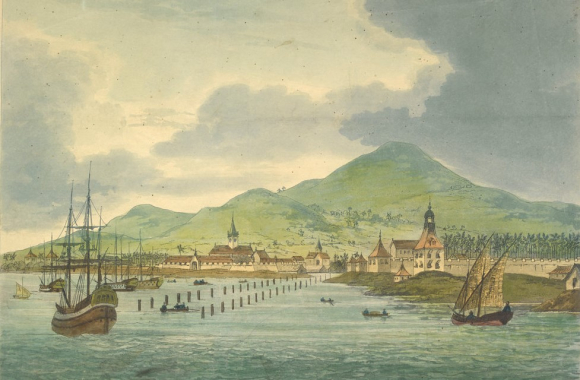 A view of Batavia, the capital of the Dutch Settlements in India, by John Wells, ca. 1800. British Library, P 494

The editors (governors) of Verhandelingen announced competitions to attract contributions, with limited success. Therefore, many of the articles were written by the editors themselves. Both Radermacher and Van Iperen wrote no fewer than three articles for Vol. 1 (printed in 1779 and 1781) and van Hogendorp wrote two, including one jointly with Radermacher. Perhaps due partly to a shortage of material, during the course of the 18th century only six volumes of Verhandelingen were published: Vol. 1 in the year after its founding, in 1779, Vol. 2 in 1780, Vol. 3 in 1787, Vol. 4 in 1786 (sic), Vol. 5 in 1790 and Vol. 6 in 1792.

These early volumes of Verhandelingen are not only extremely rare, but appear to have a complex publication history, with copies of the same volume bearing different dates of printing, and sometimes being reissued at a later date. The British Library holds an incomplete set of Verhandelingen under two main shelfmark series. The earliest volumes - all originating from the private collection of Sir Joseph Banks - are assigned individual shelfmarks in the range 438.k.10-29, which covers Vols 1-15, but in a range of different editions. The earliest are Vol. 1, which contains the ‘Constitution of the Society’, printed in Batavia in 1781 and held at 438.k.13, and two issues of Vol. 2 held at 438.k.15 and 438.k.14, while copies of a third edition of Vols 1 and 2, printed in Batavia in 1825 and 1826, are also held as 438.k.28 and 438.k.29.

Because of the Society’s academic ambitions, as mentioned above, the governors also looked for printers in the Dutch Republic to print Dutch/European editions of the volumes published in Batavia. They commissioned the book sellers Arrenberg in Rotterdam and the printer Allard from Amsterdam to do a reprint of the first volume as soon as it had appeared in Batavia. Thus, the first three volumes appeared in the Dutch Republic in 1781, 1784 and 1787 respectively, and are held in the British Library as 438.k.10, 438.k.11 and 438.k.12. These Dutch editions were more elaborate than the Batavian ones, with copper engraved foldout plates in them, although Vol.1 lacks the Constitution. The British Library’s copies of Vols. 4-15 held at the 438.k. shelfmark are all printed in Batavia. 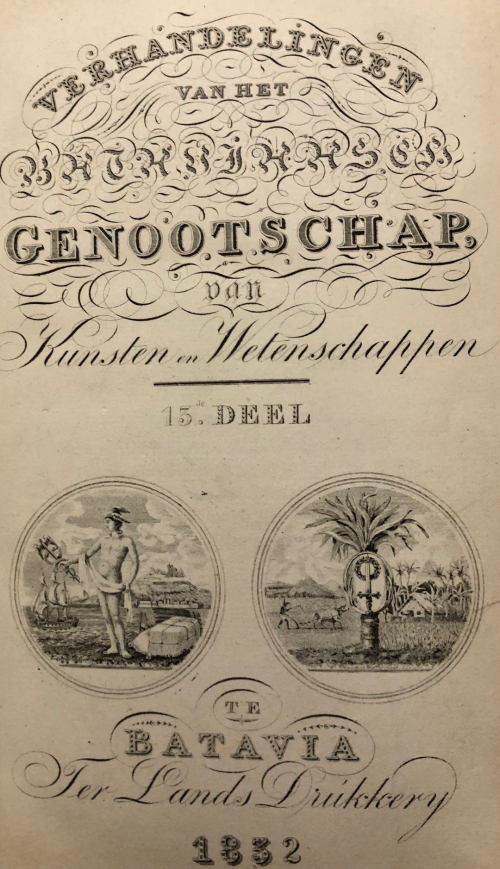 By the beginning of the 19th century the Society was almost moribund, but major political changes were then afoot. At the time of the founding of the Bataviaasch Genootschap in 1778, Batavia was the seat of administration of the Dutch East India Company (Verenigde Oost-Indische Compagnie or VOC), but in 1799 the VOC collapsed into bankruptcy and the governance was taken over by the Dutch state. In the early years of the 19th century, the Napoleonic wars in Europe spilled over into the Indian Ocean and Southeast Asia. A fleet assembled by the Governor-General of Bengal, Lord Minto, invaded Java in August 1811 and defeated the Franco-Dutch forces. For the next five years, Java was governed by a British administration, with Thomas Stamford Raffles as Lieutenant-Governor, and in 1812 Raffles took over the Presidency of the Batavian Society.

With Raffles’ encouragement, Vol. 7 of Verhandelingen was published in 1814, and was the first to appear mainly in English. It contained an address by Raffles as well as a number of articles by Thomas Horsfield and one each by Colin Mackenzie and John Leyden. The next issue, Vol. 8, published in 1816 – the final year of the British administration of Java – was also mainly in English.

After the departure of the British from Java in 1816, the Verhandelingen reverted to publication in Dutch, with some contributions in French or German. In 1857, on the occasion of the publication of Vol. 25, P. J. Veth wrote a short history of the Society drawing primarily on copies of the Verhandelingen. This appeared in vol. 21 of De Gids (‘The Guide’), the most distinguished literary journal in Holland, of which Veth was the editor (the British Library’s copy is held at 3535.930200 with another copy at P.P.4595). The British Library also holds an incomplete set of later issues of Verhandelingen, shelved at Ac.975/6, dating from 1860 to 1950, when the journal ceased publication. Following Indonesian independence in 1945, by 1962 the Society had essentially ceased activities, but was eventually transformed into the National Museum, with the books and manuscripts joining the newly-formed National Library in 1980. 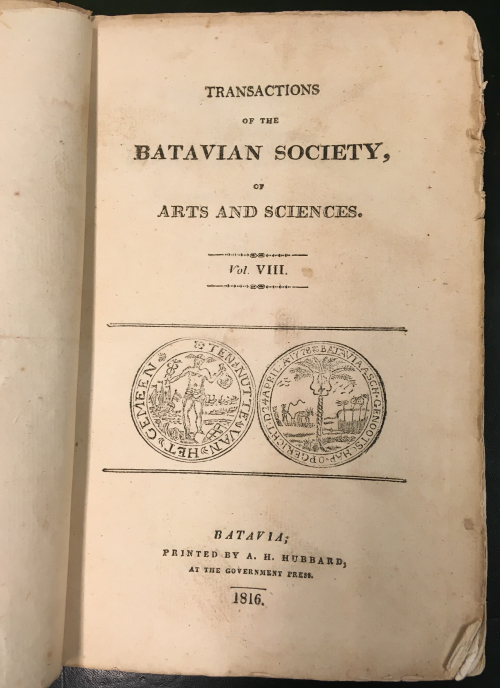 The initial, English, title page, of the Transactions of the Batavian Society of Arts and Sciences, Vol. VIII, printed in Batavia in 1816. This is followed by the Dutch title page, of the Verhandelingen van het Bataviaasch Genootschap van Kunsten en Wetenschappen. British Library, RB.23.a.39867

We were therefore delighted to be able to acquire recently for the British Library, from Voewood Rare Books, a copy of Vol. 8, printed in Batavia in 1816, which has been assigned the rare book shelfmark of RB.23.a.39867. Vol. 8 contains 10 articles, of which three are in Dutch and seven in English, all paginated separately, starting with an Address from the President, Raffles himself (95 pp). Raffles is also responsible for an account of the eruption of Mount Tambora in 1815 (25 pp), while John Crawfurd contributed the text and English summaries of two 'ancient Javanese' (actually Sanskrit) inscriptions (6 pp). 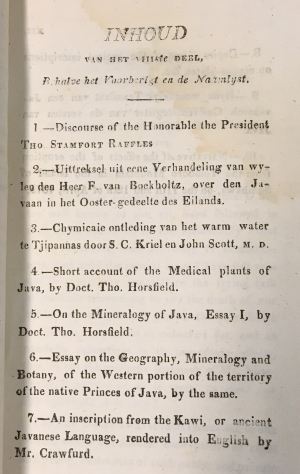 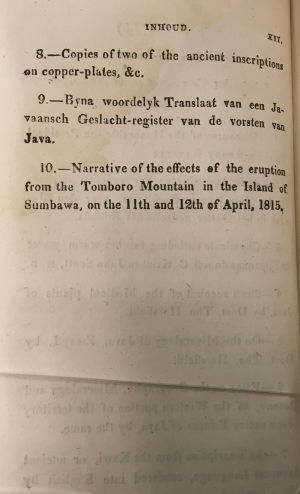 The largest number of pages in the volume are occupied by three lengthy articles by Thomas Horsfield, on Medical plants of Java (53 pp), the Mineralogy of Java (47 pp), and a long ‘Essay on the Geography, Mineralogy and Botany, of the Western portion of the territory of the native Princes of Java’ (183 pp), this last essay being the only portion of this volume which is presently widely available digitally. Thomas Horsfield (1773-1859) was an American doctor who first visited Java in 1800. Entranced by the riches of the natural environment, he returned in 1801 and entered the service of the Dutch authorities. His appointment enabled him to carry out intensive research into the geology and natural history of Java, as well as indulging his interest in antiquities. Following the British occupation of Java, he continued his work with Raffles’ encouragement. While on his extensive travels around Java by river, sea and on horseback, Horsfield was constantly sketching, and some of his pictures include in the corner what appears to be a self-portrait: a small drawing of a European man, invariably with a sketchbook. When Horsfield left Java in 1818, he retired to England, where he became the first Keeper of the East India Company’s Museum from 1820 to 1859. Many of his drawings of natural history and antiquities are held today in the British Library. 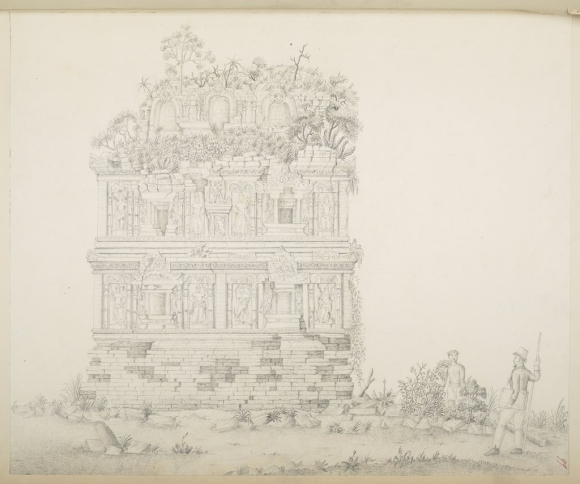 Probably the best open access to Verhandelingen is provided by the digitised set available through the Biodiversity Heritage Library, which - albeit incomplete - ranges from an 1825 printing of Vol. 1 to Vol. 61 of 1915.