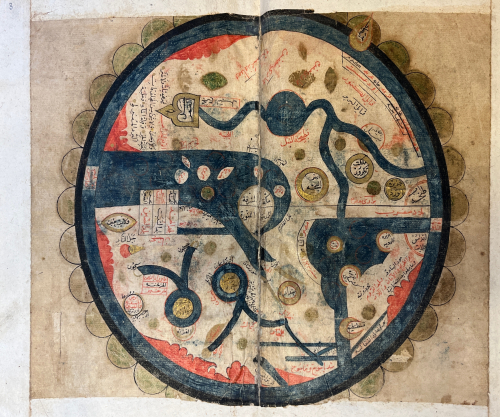 In October, we celebrated the opening of the Library’s flagship exhibition Alexander the Great: The Making of a Myth. The show explores the depth and breadth of Alexander’s influence around the globe, both as a historical personage and as myth. It should be no surprise that his persona is far from uncommon in the Turkic manuscripts held at the British Library. After all, many Turkic peoples inhabit regions that were deeply impacted by Alexander’s military campaigns, and their creative output forms an integral part of broader Islamicate literary traditions. 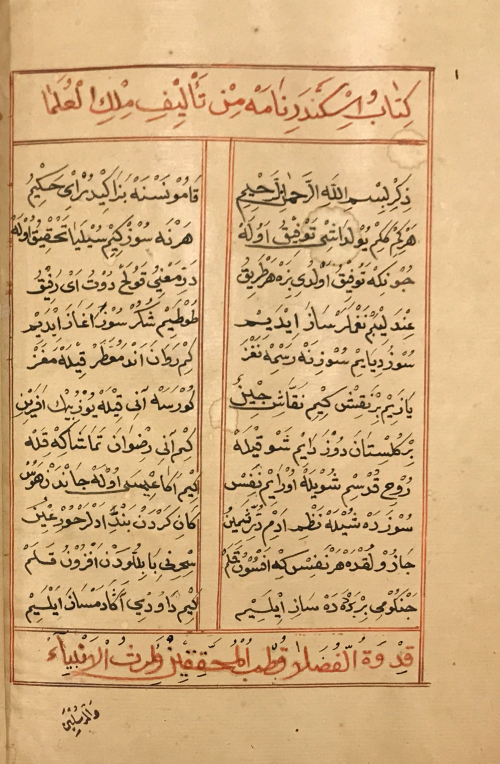 The most obvious place to start this investigation is with the İskendername or Iskendernāmah, Ottoman Turkish and Chagatai renditions of the more widespread Alexander Romance. Literally “The Book of Alexander” (İskender being the Turkish rendering of Alexander), it contains a mixture of historical fact and historicized myth. It takes as its source document the Shāhnāmah, the 10th century CE Persian Book of Kings. The poet Nizāmī Ganjavī is renowned for his creation of a standalone Persian version of the Romance based on the Shāhnāmah, but Turkic works are not necessarily translations of this 12th-century text. The most common Early Anatolian Turkish work, for example, was created by Taceddin Ahmet İbn-i İbrahim el-Ahmedi (an English stub is here) in the 1390s CE. Ahmedi was a member of the ulema during the reign of Sultan Bayezit I. He claimed to be inspired by Nizāmī, but that his own work was more than a mere translation of Nizāmī’s Iskandarnāmah. The British Library holds eight Anatolian Turkish İskendernameler, 6 of which can be identified as following from Ahmedi’s recension (Or 1376 , Or 7234, Or 13837, Add MS 7905, Add MS 7918, Harley MS 3273). The authorship of another recension has yet to be traced (Or 8699), while Or 11056 contains a mixture of Ahmedi’s version and unattributed additions. These might include extracts from Karamanlı Figani’s late 15th century recension, although further research would be needed to confirm this. 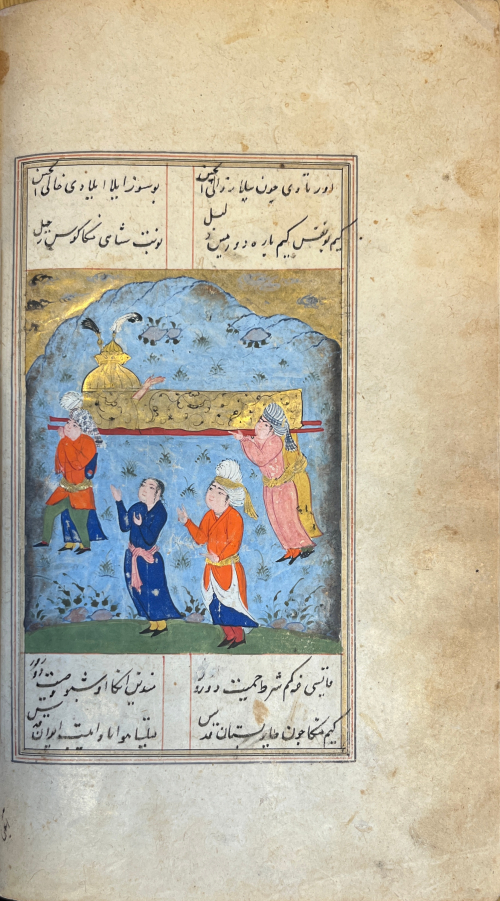 The coffin of Alexander as described in Navoiy's Sadd-i Iskandarî, with the deceased King's arm waving out the side of the vessel. (Alisher Navoiy, Ḥayrat al-abrār. 1006 AH [1598 CE]. British Library Add MS 7909 f 105v)

The Alexander Romance also appears in the works Alisher Navoiy, perhaps the greatest name in Chagatai literature. A prolific poet and intellectual, and the central pillar of classical Chagatai literary history, Navoiy crafted a mesnevi entitled Sadd-i İskandarî, which is included in his Khamsa (Or 400, Or 16183, Add MS 7908). The mesnevi takes its name from the Gates of Alexander, purportedly built by the Macedonian monarch in the Caucasus to keep tribes from Gog and Magog out of his territories. The underlying Syriac tale is on display in the exhibition, but Navoiy’s mesnevi is based on Nizāmī’s work. While none of the British Library versions contain illustration, a copy of Navoiy’s Ḥayrat al-Abrār (the first of the five texts that make up Navoiy’s Khamsah) at Add MS 7909 does contain multiple illustrations. In one of the paintings, we see Alexander’s coffin (also featured in the current exhibition) carried by two servants with the King’s arm dangling out of it. 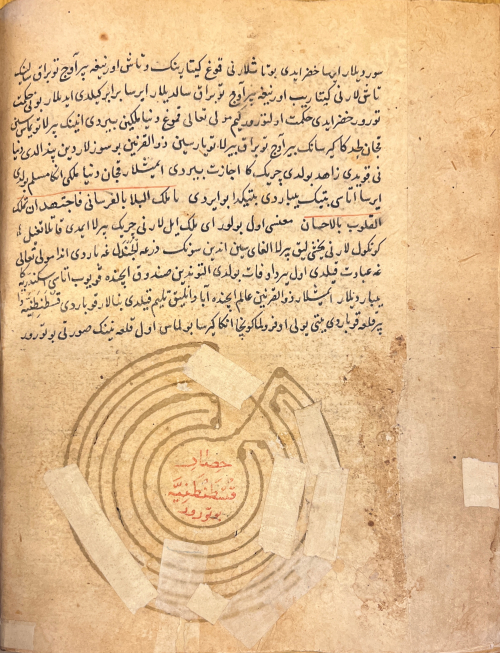 A schematic drawing of the fortress of Qusṭanṭiniyah (Istanbul), established by Zulkarneyn, at the end of the description of his feats. (Nāṣir Rabghūzī, Qiṣaṣ al-anbiyā. 15th century CE. British Library Add MS 7851 f 178v)

In various Islamic literary traditions, Alexander is often identified with Dhū al-qarnayn, or Zulkarneyn in Turkish orthography, a figure found in Surat 18 (Sūrat al-Kahf) of the Qur’an. It is in this form that we find him in some of the British Library’s other well-known Turkic holdings, particularly the Qisās al-anbiyā’. This work, originally ascribed to Ḥasan ibn Nāṣir al-Balkhī, contains the biographies of both prophets and kings, which explains Zulkarneyn’s inclusion. The British Library holds three complete or partial renditions of the Qisās, or Kısasu’l-enbiya, in Ottoman Turkish (Or 6372, Or 12815, Or 13020). By far, however, the best known of the BL’s Qisās ul-anbiyā’ copies is in a Central Asian Turkic language and found at Add MS 7851. Compiled in the 15th century and frequently referred to as the Rabghuzi, after the name of its author, Nāṣir Rabghūzī, the text is an essential source for the development of Turkic languages in the region. Rabghūzī himself states that he collected the work from various sources in the first decade of the fourteenth century CE, indicating the age of the underlying narrative. Zulkarneyn only gets twelve pages out of about 500 (ff 172v-178v), wedged between Jesus and the Asḥab al-kahf or Seven Sleepers, and ending with a schematic diagram of the fortress of Qusṭanṭiniyah (Istanbul) that he founded. The work hasn’t been digitized, but sections of it can be found on the Library’s Discovering Sacred Texts site. An abridged, later copy of the work can also be found at Or 5328, which is currently being digitized. 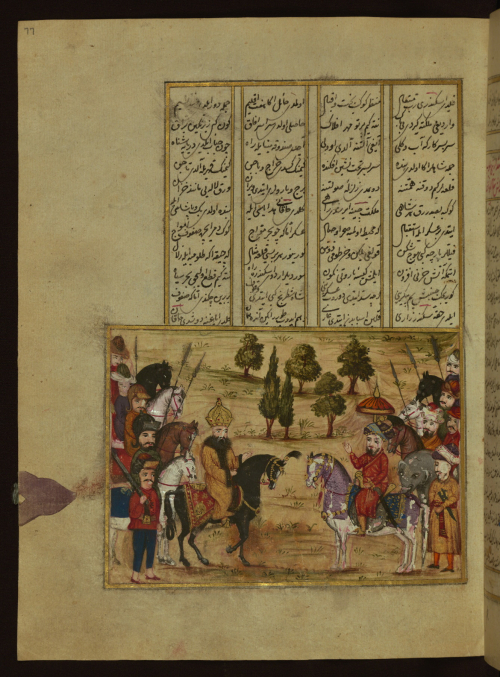 In 2019, I wrote about an illustrated copy of Nevizade Atayi’s Hamse that included homoerotic illustrations. As interesting as they might be, the images that accompany Atayi’s Heft Han aren’t the only reason to be drawn to the volume. One of the five poems contained in the work, Sohbetü’l-Ebkâr, or the Conversation of the Bachelors, includes a brief description of Alexander the Great’s march to China. Alexander never actually made it that far east, which gives us a clue to just how inflated the legends around him are. The British Library copy, sadly, doesn’t have an illustration of the ruler himself. Another volume, however, held at the Walters Museum in Philadelphia, does depict the Macedonian king at his legendary meeting with the King of China. In this painting, Alexander is atop a black steed and is adorned in a fur-trimmed gold coat with an elaborate crown. 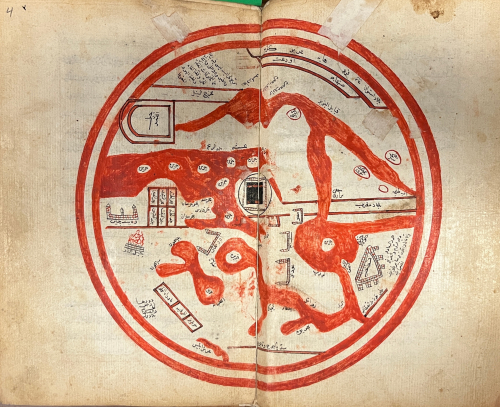 A final source worth mentioning doesn’t really mention Alexander at all. But just as he entered people’s imaginations of divine kingship, so too did the geography of his campaigns influence their conception of the world. Perhaps this is the reason that Gog and Magog ( Ye’cûc ve Me’cûc in Ottoman Turkish) can be found on some Ottoman maps from the 16th and 17th centuries. While the origins of Gog and Magog are older than those of the Alexander Romance, their placement on maps nevertheless had to accord with their appearance in the stories. In Or 7304 and in Or 13201, Ottoman Turkish translations of the Arabic cosmology Kharīdat al-ᶜajāᵓib wa farīdat al-gharāᵓib (خريدة العجائب وفريدة الغرائب), for example, the map of the world contains the Wall of Gog and Magog at the bottom. Given the orientation of the maps and the rest of their content, this places it to the north-east of Istanbul but west of Azerbaijan; somewhere in contemporary Ukraine, perhaps. Just as Alexander was matched to the listing of prophets and kings, so too were the signposts of his story factored into a reckoning of the world. 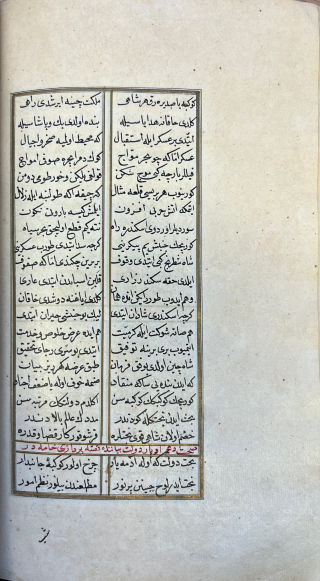 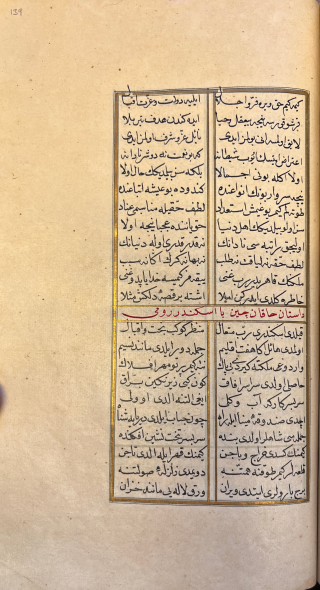 These are just a few of the examples of Alexander and the stories told of him found within the British Library’s Turkic-language manuscript collections. Their connections to Persian and other literatures gives us a hint of how İskender, or Alexander, formed one of many linkages between the literary traditions of Eurasia. For the full extent of the story, you’ll have to visit Alexander the Great: The Making of a Myth. Luckily for you, it’s on until 19 February 2023.