Serat Damar Wulan (MSS Jav 89) is probably the earliest surviving fully illustrated Javanese manuscript, and is full of lively and humorous scenes of everyday life in late 18th-century Java. In this guest blog Dr Fiona Kerlogue examines the clothes and textiles depicted in Serat Damar Wulan, extracted from her new book on the history of batik, Batik: Traces through time (2021), which is illustrated by collections in the National Museum of the Czech Republic.

The earliest compelling evidence indicating how batik was once worn is a copiously illustrated manuscript entitled Serat Damar Wulan (MSS Jav 89) presented to the library of the East India Company (and now in the British Library) by Lieutenant-Colonel Raban, the former Resident of Cirebon, in January 1815. Although the manuscript was said to be 200 years old, watermarks in the paper indicate that it more likely dates from the late 18th century. Whether the manuscript was written and illustrated in Cirebon or elsewhere is another question. The absence in the clothing depicted of three batik patterns generally regarded by modern commentators as quintessential and historic Cirebon designs – megamendung (clouds); taman arum (perfumed garden); and peksinagaliman (a mythical composite animal) – suggests that a Cirebon origin is unlikely. 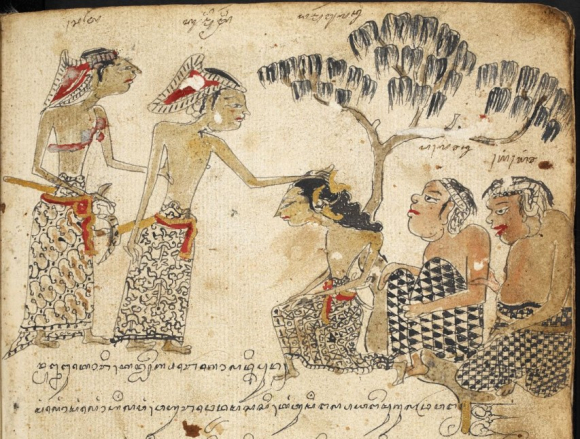 The legend of Damar Wulan is associated with East Java, centring as it does on the Majapahit kingdom and especially its vassal state Blambangan (now Banyuwangi), which was located in the easternmost part of Java between the 13th and 18th centuries. The story seems to be based on events which took place in the early 15th century, when war broke out between Majapahit and Blambangan, ending in the defeat of Blambangan.

The story is particularly significant in relation to costume, partly because of the changes in status which the characters undergo and how these are reflected in the clothes they wear. The cast includes noblemen and their henchmen, an aristocratic lady, servants, both male and female, soldiers, stallholders and a blacksmith. The central character, Damar Wulan, is a nobleman but is appointed as stable boy to the ruler of Majapahit, and then imprisoned; eventually he himself becomes king of Majapahit. His changes in status are reflected in the clothes he wears; the clothing worn by other actors in the story also indicates their status (Coster-Wijsman 1953).

It seems likely that the clothing in the illustrations, which corresponds quite closely with the descriptions of clothing in Raffles’ slightly later History of Java, published in 1817, reflects quite accurately the type of clothing worn at the time the drawings were made. Had they been drawn to reflect clothing of the age in which the story is set, there would not be the European-influenced styles of buttoned long jackets, trews and hats which characterise the clothing of Damar Wulan’s opponents especially. Some of the batik designs depicted can be identified today.

The main characters in the story are Damar Wulan, the hero; Layang Setra and Layang Kumir, the sons of Patih (regent or chief minister) Logender of the Majapahit empire; and Damar Wulan and his servants (panakawan) Sabda Palon and Naya Genggong. Menak Jingga, Damar Wulan’s rival, who threatens the empire and is eventually slain by Damar Wulan at the request of the queen, plays a key role. When he first appears (Figure 1), Damar Wulan is kneeling before Layang Setra and Layang Kumir, wearing a batik jarit decorated in bands of different motifs, the bands drawn bent to follow his kneeling posture. Layang Setra and Layang Kumir also wear batik jarit, one (on the left) with a parang or ‘knife’ design, the other with a semen pattern. The parang design marks the wearer as a man of high status, an aristocrat, and Damar Wulan’s attitude is appropriately respectful. All three skirt cloths have a dotted or striped border along the lower edge. The elaborately wrapped headcloths worn by the two nobles have pengada borders. The two servants wear skirt cloths with simple triangular and check patterns, probably representing simple country-style batik. 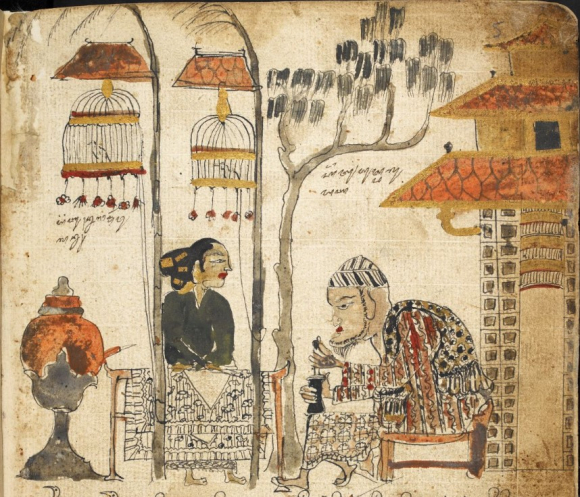 Figure 2, showing a woman of high status waxing a batik headcloth, occurs early in the manuscript. She is the daughter of Ki Buyut Paluhomba, the wife of the minister Patih Udara, who was the brother of Patih Logender and his predecessor as chief minister of Majapahit. The cloth hangs over a wooden or bamboo rack, gawangan, which supports it while the wax is applied. It has a plain white tengahan in the centre, a main field where motifs are set against a ground filled with parallel lines as the filling motif, or isen, and a pengada with short stripes arranged in pairs, separated from the main field by a white border with uneven or wavy edges. Her father’s skirt cloth has a pattern of circular or floral motifs arranged at the intersections of the squares into which the field is divided. 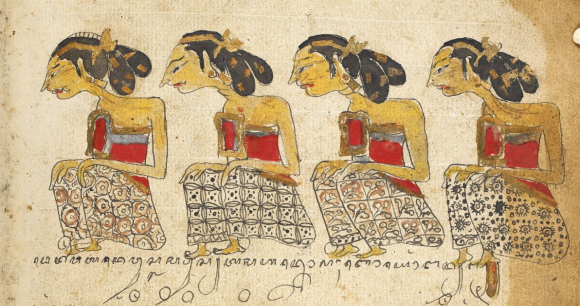 Symmetrical designs arranged in squares repeating across the field feature frequently in skirt cloths in the manuscript, as shown in Figure 3. This type of pattern is known as ceplokan, and was one of the most common design types in the 19th century, at least in Central Java. This type of design persisted into the 20th century.

In the manuscript there are frequent depictions of women’s breast cloths, or kemben, with patterned or plain lozenges. These are worn by nearly all the women, including stall holders and court ladies. In one scene Kencanawungu, the maiden queen of Majapahit, on a raised platform on the right, receives the widow of the ruler of Tuban, who is fainting on the left (Figure 4). She is accompanied by her daughter and other women, who wear a variety of designs on their kemben. The queen herself is wearing an exotic upper garment, probably intending to represent a richly embroidered cloth rather than batik. The tall woman at the centre is the bereaved mother. Her kemben is decorated with cemukiran around the tengahan, befitting her status. Elsewhere in the manuscript the most common kemben has a red central lozenge. 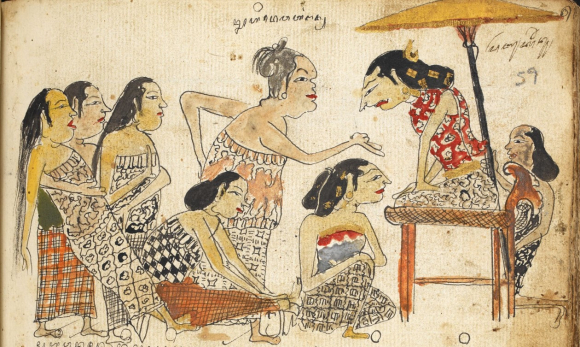 All of the male characters of high status appear in dodot, in a variety of designs. In one scene, the villain Menak Jingga wears a dodot with a striking cemukiran (Figure 5). His dodot is lifted high, revealing a good length of trouser and reflecting his high status. Menak Jingga tends to wear ostentatious clothing, always with a huge parang design on his dodot as opposed to that worn by the ruler of the smaller polity, Tuban, whose lesser status is revealed in the smaller size of his motifs, and by Patih Logender. 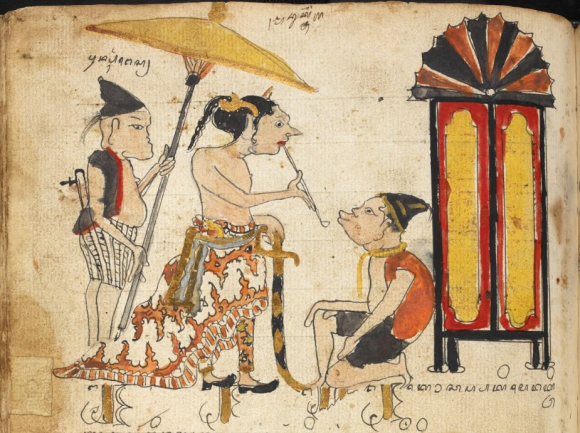 Once his noble birth is revealed Damar Wulan wears a plain red dodot, perhaps symbolic of his courage, and towards the end of the story, when his status is elevated further, cemukiran appear. When Damar Wulan is visited in the stables by Patih Logender’s daughter, Anjasmara, he is wearing a humble lurik skirt cloth (Figure 6); later in the story, as king of Majapahit he wears a dodot (Figure 7). 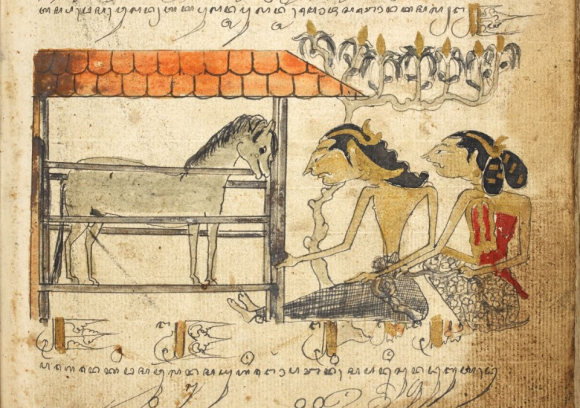 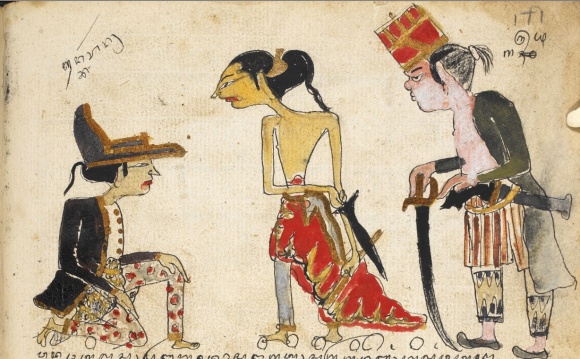 His two servants, Sabda Palon and Naya Genggong, begin the story in short trousers made of lurik (Figure 8) but by the end one of them, too, is wearing a dodot (Figure 9). There is humour in this pretentious adoption of the clothing of a man of power, but through his loyalty to his master he has earned the right to wear it. 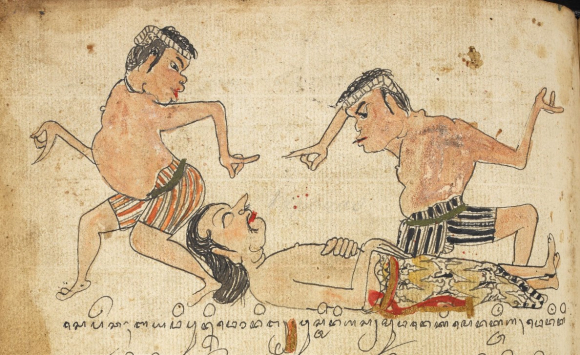 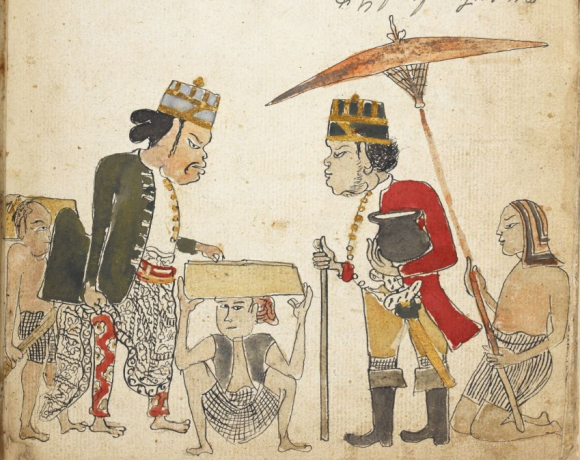 The patterns drawn in these illustrations reveal the way in which clothing, and in particular batik clothing, was worn to express both status and character in Java at the end of the 18th century. In the century which followed, great changes took place, with the introduction of new ideas and techniques that led to the development of both commercially-produced, low-quality batik for the masses and batik of exceptionally high quality, workmanship and beauty.

Fiona Kerlogue was formerly Assistant Keeper of Anthropology at the Horniman Museum.

Posted by Annabel Gallop at 1:53 AM