A Chevening Fellowship is currently being hosted for twelve months by the Library’s Asian and African Collections department with the aim of researching and cataloguing manuscript textiles in the Southeast Asian collections. The Library holds about 3000 manuscripts from Southeast Asia, forming the largest and most significant collection of Southeast Asian manuscripts in the UK. Highlights include illustrated paper folding books and gilded manuscript chests from Myanmar (Burma) and Thailand, rare palm leaf manuscripts from Cambodia, Laos and northern Thailand, royal letters in Malay from the courts of the archipelago, some of the earliest known Batak divination manuals from Sumatra, as well as unique royal letters and edicts from Vietnam and Thailand. 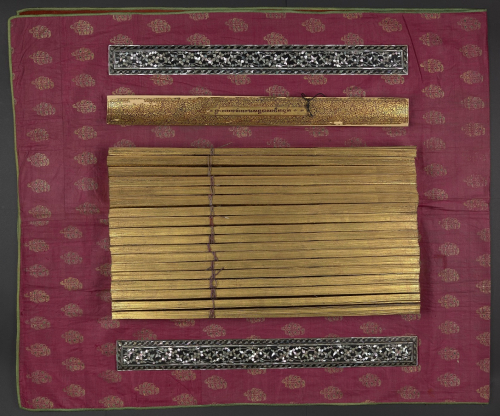 Palm leaf manuscript containing a Buddhist commentary, from central Thailand c. 1824-52, with a silk wrapping cloth with gold thread, of Indian origin, made to order for the Thai royal court. British Library, Or 5107

Within this body of material, recent digitisation projects and exhibitions have brought to light over one hundred manuscript textiles - either wrapped around or attached to manuscripts as a form of protective cover or binding - without or with only minimal documentation and cataloguing data. Often the textiles were custom-made for one particular manuscript, and such objects could be made from valuable hand-woven silk brocades, ikat fabrics, dyed or printed cotton and imported materials like chintz and silk damask. Specially designed textiles were commissioned to add meritorious value to a Buddhist manuscript or to an entire set of Buddhist texts. Sometimes discarded textiles like monks’ robes, used and unused clothes of deceased people, or leftover pieces of cloths made for other purposes were utilised to create beautiful manuscript textiles. 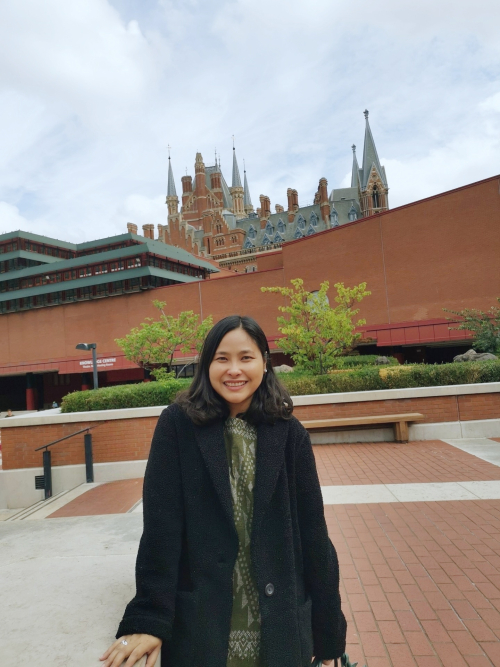 Methaporn Singhanan on her first day as Chevening Fellow at the British Library, September 2022

The Chevening Fellow who is currently surveying and assessing these under-researched and often fragile Southeast Asian manuscript textiles is Methaporn Singhanan, a Ph.D. student from the Social Science Faculty at Chiang Mai University in Thailand, where she is also running a volunteer project to conserve Buddhist arts in northern Thailand. Her upcoming dissertation focuses on Southeast Asian textiles and trade routes, highlighting the importance of textiles as a source of information about the world's economy and trade links between countries and continents. Methaporn Singhanan has over seven years of experience as a curator at the Money and Textile Museum, Bank of Thailand, Northern Region Office, where she worked with textiles and curated exhibitions. She holds a B.A. in History as well as an M.A. in Art and Cultural Management from Chiang Mai University. Before joining the Bank of Thailand in 2013, Methaporn Singhanan worked as a historian for the Northern Archaeology Center (NAC) at Chiang Mai University, where she assisted in the conservation of artifacts from temples and the establishment of a local museum in northern Thailand. Her knowledge and expertise will help to provide comprehensive catalogue records and to plan and inform future conservation work and public engagement with the manuscript textiles. Shan paper manuscript bound with a patterned cotton cloth cover and a felt binding ribbon, Shan State, first half of the 20th century. British Library, Or 15368. From the collection of Søren Egerod.

The aims of this project are not only to identify the Library’s holdings of Southeast Asian manuscript textiles dating mainly from the 18th to the 20th century, but also to document in detail the materials, size, estimated age, pattern, technique of creation, country of origin, provenance and general condition of each item and, where possible, to recommend which items should be prioritised for conservation treatment. Methaporn Singhanan works closely with the Library’s curators of Southeast Asian collections to share information about these manuscript textiles internally, especially with colleagues in the Library’s Conservation Centre, as well as externally with organisations in the UK and abroad that have an interest in the curation and conservation of Asian textiles.

Chevening is the UK government’s international awards scheme aimed at developing global leaders. Funded by the Foreign, Commonwealth and Development Office (FCDO) and partner organisations, Chevening offers fellowships to mid-career professionals to undertake a bespoke short course in the UK.

Posted by Annabel Gallop at 1:52 AM