A currently ongoing initiative to add provenance details to catalogue records of manuscripts in the British Library’s Thai, Lao and Cambodian collections  has brought to light that three palm leaf manuscripts were previously part of Carl Bock’s collection of Southeast Asian artefacts. Carl Alfred Bock (1849-1932) was a Norwegian natural scientist and explorer, who travelled in Southeast Asia between 1878 to 1882. A zoological collecting trip took him first to Sumatra, followed by an expedition to gather information on the peoples of Borneo for Johan Willem van Lansberge, governor-general of the Dutch East Indies. In 1881 Bock travelled to Siam (Thailand) for fourteen months on a mission to collect botanical and zoological specimens, with the backing of the Zoological Society in London and the financial support of the Scottish Marquis of Tweddale, William M. Haye, an enthusiastic botanist. What Bock brought back from his expedition was much more than natural specimens though. 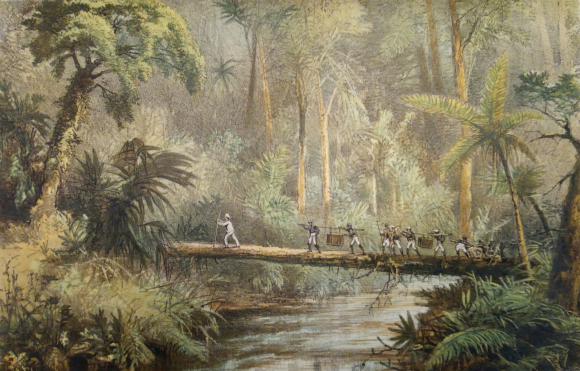 Impression of Carl Bock and his team during the expedition to Borneo. Lithograph by C. F. Kell of Castle St, Holborn, London, published in The head-hunters of Borneo by Carl Bock (London, 1881).  British Library, V10009, plate 29.

With the permission and support of King Chulalongkorn (Rama V), Bock travelled on a steamer up the Chao Phraya river, then continued on smaller boats on the Ping river to Chiang Mai, and finally by boat and elephant further north to Chiang Rai and Chiang Saen on the Mekong. He had to promise the king to refrain from any political allusions and was accompanied by Siamese soldiers. In the northern regions he passed through Tak, Lamphun, Lakhon, and Fang. Bock met Lao- and Shan-speaking people in the larger settlements along the rivers and was closely observed, and sometimes delayed, by local rulers. He noted that from Tak northwards it became increasingly difficult to move around and to purchase objects because Siamese money was not recognised, nor were the visa and letters issued by the Siamese government and the king. He concluded that the border between Siam and the polities of Lao-speaking people was running near Tak by the River Ping.

Bock’s travel route from Bangkok to Chiang Saen and back, published in Temples and Elephants: The Narrative of a Journey of Exploration Through Upper Siam and Lao by Carl Bock (London, 1884). British Library, T 38901, p. [xv]

Text passage in Northern Thai Dhamma script from a text on Buddhist psychology, Mahawibak, incised on palm leaf, dated 1856. From the collection of Carl Bock. British Library, Or 2629, first bundle

Three palm leaf manuscripts that were originally part of Bock’s collection at the British Museum were transferred to the British Library in or shortly after 1973. All three are incised in Dhamma (or Tham) script, seen in the image above, which was used in the historical kingdoms of Lanna (northern Thailand) and Lan Sang (Laos and north-eastern Thailand). They are not by the same scribe since the writing styles differ, and there are also some physical differences. Or 2629 consists of eleven palm leaf bundles with gilt and red lacquered edges. They contain a variety of Buddhists texts, mainly in Pali language, including one chapter from the Vessantara Jataka.

Nine palm leaf bundles containing the Mahosadha Jataka in Northern Thai Dhamma script, held together with wooden sticks to form one large manuscript, dated 1842. From the collection of Carl Bock. British Library, Or 2630

One manuscript that stands out in terms of binding methods is a palm leaf manuscript (Or 2630) consisting of nine bundles that are not bound with a cord, which is usually the case with palm leaf manuscripts in the Thai and Lao traditions, but stacked together using two wooden sticks (shown above). This method is well known in the Burmese manuscript tradition. However, the bundles probably were originally bound with a white-and-red cotton cord with human hair woven in, which was removed and is now kept alongside the manuscript. The edges of the palm leaves are covered with gold and black lacquer. Each bundle contains a chapter from the Mahosadha Jataka in Dhamma script, together with a colophon mentioning 1842 as the year of its creation.

The third manuscript (Or 2631, shown below) consists of palm leaves with gilt and red lacquered edges and wooden covers. The content, six chapters of the Vidhura Jataka (partially fragmented), is written neatly in Dhamma script, in a cursive calligraphy-like style. The leaves are held together with a black cord, however, this cord was inserted later as it is of a more recent make. Originally, the six chapters may have been bound in six separate bundles. Three of the six chapters mention 1860 as the year of creation.

We have no certainty as to where and how Bock acquired the manuscripts, but he reported that in Lakhon he was shown the temple library on stilts at Wat Luang: “Passing through a trap-door in this upper floor – the door is always religiously bolted against intruders – we enter a room containing a number of large chests, coloured red or black and decorated with figures or scroll-work in gold-leaf, in which the sacred palm leaf MSS are kept. Each volume is carefully wrapped in a gay-coloured cloth, and the chests are kept closely locked.” (Bock, 1884, p. 167)

Bock published his observations and experiences in a book with the title Temples and Elephants: The Narrative of a Journey of Exploration Through Upper Siam and Lao (London: Sampson Low, Marston, Searle and Rivington, 1884), which was translated into various languages (Norwegian 1884, German 1885, French 1889, Thai 1962) and re-published several times (Bangkok 1985, Singapore 1986, Geneva 2013, Nonthaburi 2019).
Other works by Bock include academic articles in Proceedings from the Scientific Meetings of the Zoological Society of London (1878, 1879, and 1881) and the book The Head-Hunters of Borneo: a narrative of Travel up the Mahakkam and down the Barito; also, Journeyings in Sumatra (London: Sampson Low, Marston, Searle and Rivington, 1881). 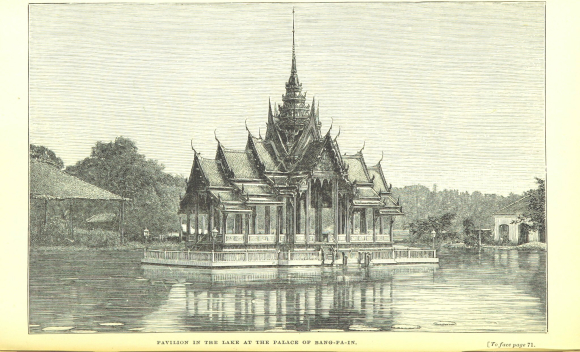 Lithograph depicting the Bang Pa-In Palace on the Chao Phraya river near Ayutthaya, published in Temples and Elephants: The Narrative of a Journey of Exploration Through Upper Siam and Lao by Carl Bock (London, 1884). British Library, T 38901, p. [70]

Apart from natural specimens, cultural artefacts and information about the peoples of northern Thailand, Bock reportedly brought back a young girl named Krao who was born with hypertrichosis. Although there is no mention in Bock’s publications of Krao or of one Professor George G. Shelly who had apparently accompanied Bock on his expedition, newspaper articles and numerous advertisements featuring Krao were published upon their return to Europe. They believed that in Krao they had found Darwin’s “missing link between man and ape”, and she was exhibited in Farini’s “wonder shows” in London and New York. It soon became very clear that Krao, who after only a few months had learned to speak some English and German, had acquired basic reading and writing skills, and was able to entertain large crowds of people with wit and humour, was more human than those who had taken her from her family and her world. Later she had a successful career in the show business and toured the US and Europe until her death from influenza in 1926. 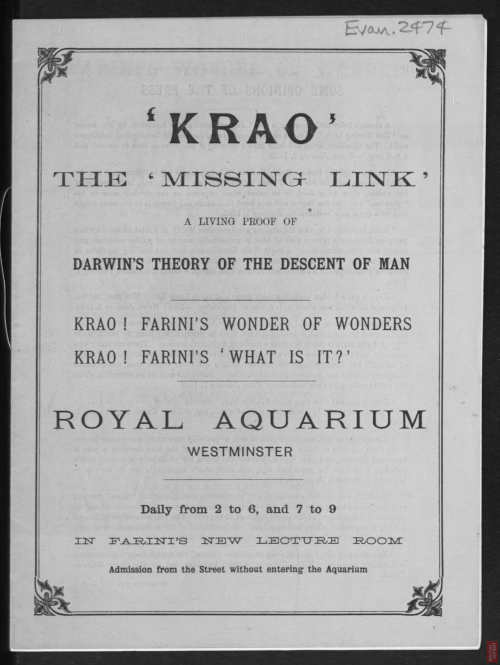 After his expeditions in Southeast Asia, Bock joined the diplomatic service and became Norwegian-Swedish vice-consul in Shanghai in 1886, then consul-general in Shanghai in 1893, consul in Antwerp in 1899, and consul-general in Lisbon from 1900 to 1903. He travelled in Sichuan and Tibet in 1893. From 1906 until his death in 1932 he lived in Brussels.