A book of Malay pantuns from Portugal

The Portuguese were the first Europeans to sail around the southern tip of Africa and across the Indian Ocean to reach India and then Southeast Asia. In 1511 Portuguese forces captured Melaka, the greatest Malay kingdom in Southeast Asia, and held it until 1641. Throughout the 16th century armed Portuguese envoys-cum-merchants roamed across the Malay archipelago in search of spices, without competition from northern European traders, who only arrived on the scene at the turn of the 17th century. It is thus a source of consternation that almost no Malay or other vernacular Southeast Asian manuscripts can be found today in Portugal, compared with the many hundreds held in Britain, the Netherlands, France and Germany. Admittedly, the oldest surviving paper manuscript in Arabic script from Southeast Asia – a letter in Arabic of 1516 from the ruler of Pasai in Sumatra to the Portuguese governor of Goa in India – is held in the Torre do Tombo Archives in Lisbon, as are the two earliest known Malay manuscript letters, from Ternate in 1521 and 1522. But not a single Malay manuscript volume or ‘book’ is known to be held in Portugal. 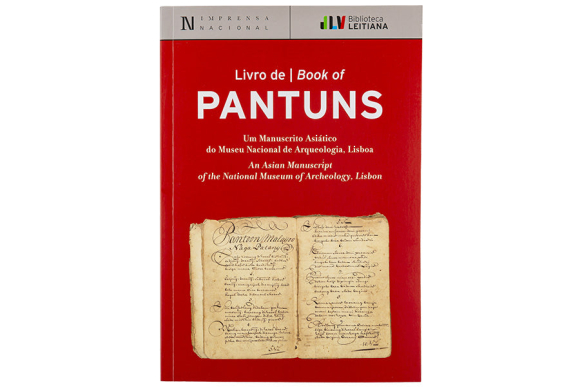 Therefore, the news of the recent publication this year of Livro de Pantuns / Book of Pantuns, presenting a manuscript containing Malay pantun or quatrains, from the collection of the National Museum of Archaeology, Lisbon, was greeted with much interest all over the world. The manuscript was said to date probably to the late 17th/early 18th century, and contained a number of sequences of poems written in both Portuguese creole and Malay in romanised script, created and circulated in the mixed Mardijker communities of Tugu and Batavia around present-day Jakarta in Java. Would this discovery perhaps lead to the unearthing of other Malay manuscripts long hidden in repositories in Portugal?

We are most grateful to the publishers for kindly sending a copy to the British Library, and as soon as it arrived on my desk, I eagerly unwrapped the package to browse the volume. To my surprise, it transpired that the manuscript had not, as I had assumed, been resting undisturbed for several centuries in Portugal since making its way to Europe from Java (p. 97). Instead, it had first surfaced in London in around 1865, in the hands of the now venerable but then newly-established antiquarian bookseller, Bernard Quaritch (whose firm has just celebrated its 175th birthday). The purchaser, Ernst Reinhold Rost (1822-1896), was a polymath linguist who had close connections both with the British Library and Malay scholarship: from 1869 to 1893 he served as Librarian of the India Office, and he also contributed the articles on ‘Malay Language and Literature’, amongst others, to the 9th edition of the Encyclopaedia Britannica.

Rost was in contact with Hugo Schuchardt (1842-1927), a professor at Graz in Austria who had a lifelong interest in creoles or dialectal variants formed through contact between European and other languages. The Pantuns manuscript was of enormous interest to Schuchardt, to whom Rost sent the manuscript in 1885, initially on loan before formally gifting it in August 1895 (pp. 98-99). On his own death in 1927, Schuchardt in turn bequeathed the manuscript to a Portuguese scholar, José Leite de Vasconcelos (1858-1941), who had visited Graz especially to study the book. Leite was the founder of the National Museum of Archaeology in Lisbon, and on his death his papers and collections were all willed to the Museum. However, as Leite never mentioned that the Malay manuscript was in his possession, it was only ‘rediscovered’ in a box in the Museum in 2018 (p. 96) – which happy event led to the publication of the present book.

This fully bilingual book is a rich collaboration between a large number of scholars, with detailed contextual studies on the history of the manuscript by Ivo Castro and Hugo C. Cardoso; on the ‘Portuguese-lexified Creole’ verses by Alan Baxter and Cardoso; on the Malay poems by Gijs Koster; and on the spelling and language of the Malay used by Alexander Adelaar. As shown below, the manuscript itself is presented generously and impeccably, with a beautifully printed full facsimile accompanied on each page with a diplomatic transcription of the text. This is followed by the edition proper in which the Malay pantuns appear in turn in diplomatic transcription, modernised spelling, modern Malay rendering, Portuguese translation and English translation, with full bilingual annotations at the foot of each page for easy reference. 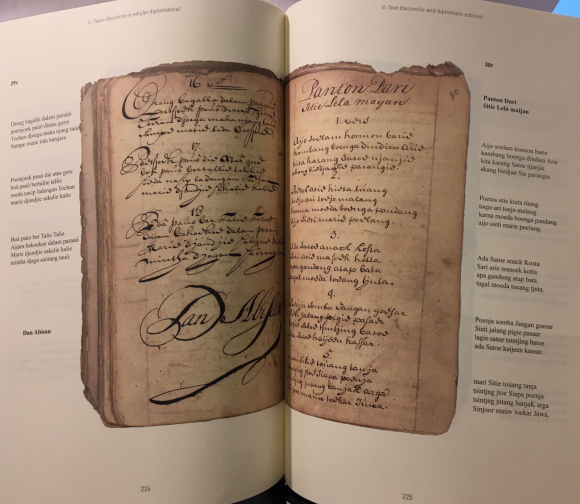 Facsimile of the manuscript, with the diplomatic transcription of the text in the margins of each page. Livro de Pantuns, pp. 224-225 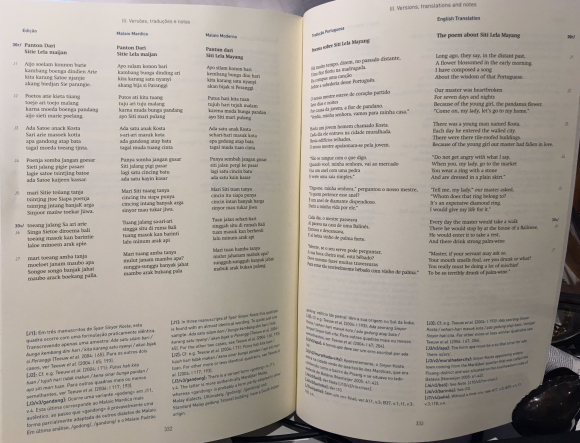 Text edition of the manuscript, presented in five columns, with on the left hand page first the diplomatic transcription of the Malay, followed by the modernised spelling in the centre and then the modern Malay rendering. On the right hand page are the Portuguese and English translations of the Malay. Livro de Pantuns, pp. 332-333.

I chose the pages above because they contain the section entitled Panton Dari Sitie Lela maijan, ‘The poem about Siti Lela Mayang’, which, as Gijs Koster explains (p. 138), bears strong similarities in parts to a well-known narrative poem called Syair Sinyor Kosta, ‘Poem on Sinyor Kosta’. This poem is also known as Syair Silambari, and is found in the Malay manuscript shown below (MSS Malay B 3), from the collection of the India Office Library and now held in the British Library, copied in Penang in 1806 by the scribe Ibrahim.  The Penang version begins with this verse:

Long ago, they say, in the distant past / A flower blossomed in the early morning
I have composed a song / About the wisdom of that Portuguese

And indeed, the next quatrain in the Penang manuscript - introducing Siti Lela Mayang - occurs on the following page of the Batavia manuscript too. Hearing exactly the same phrases and words in the Batavia panton and the opening of the Penang syair, even with the lines transposed, hints at just how familiar this repertory of verses would have been to the audiences of port cities throughout the Malay world in the 17th and 18th centuries. It furthermore illustrates the crucial importance of the Lisbon manuscript as an early chronological marker for the circulation of these poems.

It is tempting to wonder whether Reinhold Rost ever considered presenting his Malay manuscript of pantuns to the India Office Library, to join its 'sibling' Syair Silambari MSS Malay B.3.  However, if this had happened, it is unlikely that the Livro de Pantuns / Book of Pantuns would have benefitted from the combined attentions of such an impressive array of experts as has been assembled in Lisbon, resulting in this wonderful new publication. 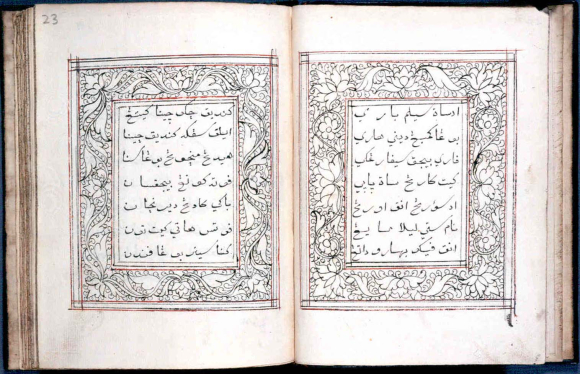 Posted by Annabel Gallop at 1:35 AM