Glimpses from the ‘Golden Land’: Decorative manuscript art in Thailand and beyond

One of the most enchanting items in the 'Bound in Gold' section of the British Library's GOLD exhibition (20 May - 2 October 2022) is the gold and laquer front cover on a Thai manuscript (Or 15257) depicting animals and plants in the heavenly Himavanta forest of the Buddhist cosmos, a detail of which is shown below.  This blog will discuss the techniques that were used in Thailand and other parts of mainland Southeast Asia to create this book cover and other examples of gilded manuscript art.

The beauty of illustrated Buddhist manuscripts from mainland Southeast Asia is often further enhanced by lavish gold embellishments. The region, rich in natural gold deposits found in rocks and as “gold sand” in and along rivers, was once called Suvarnabhumi, ‘Golden Land’, by Indian merchants in the first millennium CE. A Thai inscription dated 1292 CE, attributed to King Ramkamhaeng of Sukhothai, documents free trade in gold and silver. Gold was not only important in the commerce with the outside world, but also had and continues to have religious significance: gold images of the Buddha and gold-covered stupa monuments, texts written in gold ink, gold-leaf ornaments on Buddhist temple buildings and furniture can be found across the Southeast Asian mainland. In the Theravada Buddhist tradition, gold decorations were applied to increase the meritorious value of a manuscript, but also to reflect on the social status of the person who commissioned a manuscript or whom such a work was dedicated to. Gold-leaf applications in illustrations helped to give prominence to representations of the Buddha as well as Buddhist and Hindu deities. This blog explores the use of gold to decorate manuscripts in Thailand (formerly Siam) and techniques of applying gold on paper, palm leaves, wood and cloth.

Detail from the back cover of a Thai folding book decorated with gold on black lacquer in lai rot nam technique. Central Thailand, second half of the 19th century. British Library, Or 15257

The first step consists of applying on the chosen surface several coats of black lacquer, a resin from a tree in the sumac family. The design is traced on parchment paper, and small holes are punched along the lines with a needle. The artist then places the perforated paper on the dried lacquer and wipes it with white clay to copy the design on to the lacquered surface. With a yellow gummy paint made from gamboge and river tamarind rubber the parts which remain black are covered in all their smallest details.

Front cover of a folding book containing the story of Phra Malai, with gold decorations made in lai rot nam technique. Central Thailand, 1894. British Library, Or 16101

The next step in this process is to add a thin coat of lacquer glue over the surface, and when it is semi-dry, gold leaf is applied. After about twelve to twenty hours the work is “washed with water”: using a wet cotton ball or sponge the artist gently detaches the gummy paint to expose the lacquer while the remaining gold design, glued to the lacquered surface, appears. Hence this art is called lai rot nam, which is the Thai expression for ‘designs washed with water’. The beauty of the finished work depends first upon an exquisite design and afterwards a perfect execution which require artistic talent as well as excellent technological knowledge and skills.

The finest examples of Thai folding books have black lacquer covers with lavish gold decorations made in the lai rot nam technique. Often these were funeral or commemoration books commissioned by royals or wealthy members of the society and offered to the Buddhist order of monastics, Sangha. Made from several layers of sturdy mulberry paper, their covers provide more space to apply decorative designs in gold than the much narrower palm leaf manuscripts. Motifs of these decorations include scenes from the heavenly Himavanta forest, plants, mythical and real animals, deities and repetitive floral patterns.

Palm leaf bundles with cover decorations made in this technique are also found in the manuscript traditions of North Thailand (Lanna) and Laos. Here, the floral patterns are often less repetitive and reflect the artistic traditions of this cultural area.

Detail of the wooden front cover of a Kammavaca palm leaf manuscript with gold floral ornaments made in lai rot nam technique on black lacquer. North Thailand, 1903. British Library, Or 11799

Gilded pieces of Thai furniture show how manuscripts were traditionally kept in temple libraries. They are also outstanding examples of gold-and-lacquer art applied to larger surfaces. Unique designs were executed in the lai rot nam technique on wooden cabinets to house an entire set of the Buddhist canon (Tipitaka), depicting scenes from the Birth Tales of the Buddha or from the heavenly forest Himavanta. With numerous such cabinets, the libraries of royal temples truly looked like enormous treasure chests, in which the actual treasure were the teachings of the Buddha. 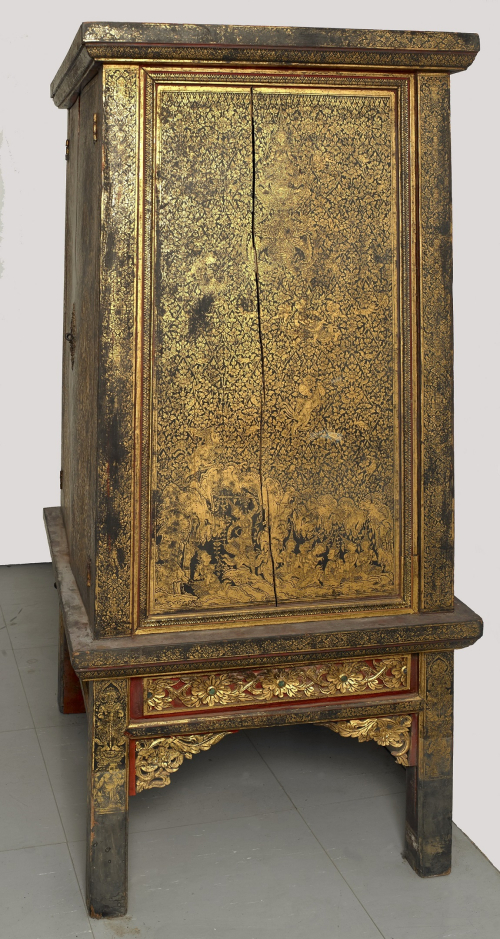 Side view of a wooden manuscript cabinet showing a scene from the Mahosadha Jataka in gold and lacquer, made in the lai rot nam technique. Central Thailand, 19th century. Gift from Doris Duke’s Southeast Asian Art Collection. British Library, Foster 1057

Another method to apply gold on lacquer is the stencil technique, which was and continues to be popular in North Thailand and Laos, but it was also known in Cambodia and the Shan State of Myanmar (formerly Burma). Entire temple walls, pillars, ceilings, window panels, doors and furniture could be decorated with this technique. Buddhist temples well-known for their interiors adorned with exquisite gold stencil-designs are Vat Xieng Thong in Luang Prabang, and Wat Phra Sing in Chiang Mai, for example. Custom-made chests for single paper or palm-leaf manuscripts were frequently embellished with gold leaf on red or black lacquer, applied with the stencil technique.

Front view of a wooden chest for a single folding book with gold pattern made in stencil technique on red lacquer. Thailand, late 19th or early 20th century. British Library, Or 16840

To create the stencil ornaments the artist draws or copies the desired design on a thin sheet of paper. This is affixed to a piece of sturdy mulberry paper, which the artist places on a wooden plank. The parts that shall appear in gold are cut out, using straight and curved chisels of varying sizes. Once the entire pattern has been cut out, the artist attaches the stencil to the lacquered surface of the object to be decorated, then applies gold leaf or gold paint through the stencil openings with a soft sponge or brush. When the stencil is removed from the surface carefully, the design comes to light.

Manuscript covers containing Buddhist scriptures, especially Kammavaca ordination texts, were often decorated with gold in the stencil technique. The image below shows the wooden covers of a Kammavaca manuscript from North Thailand. This manuscript was made in the folding book format with text in gold script and illustrations on blackened cloth. The sturdy covers were added to give stability and protection to the textile. This example is interesting as it combines red and black lacquer on which the gold pattern of lotus flowers was applied in the stencil technique.

Wooden covers of a Kammavaca manuscript in folding book format made from cloth. The floral ornaments were executed in stencil technique on black lacquer, with a red lacquer frame. North Thailand, 19th century. British Library, Or 14025

Whereas the lai rot nam and stencil techniques are found across mainland Southeast Asia, a third method to apply gold embellishments on manuscripts was popular in Burma (now Myanmar). Here, the lacquered surface was covered entirely with gold leaf before the design was drawn on it with a pen in bright red paint made from lacquer and cinnabar. Decorative text portions in Burmese square script, especially in Kammavaca manuscripts, were executed in this technique as well, but afterwards filled in with a thick layer of black lacquer. The tradition to fill the spaces between the lines of text with delicate floral patterns lends these unique manuscripts an air of lightness and elegance.

Kammavaca manuscript with text in Burmese square script in black lacquer on a gilded surface. On the sides and between the lines of text are decorations drawn in red colour. Myanmar, 19th century. British Library, Or 13896, f. 2r