One of the most important items in the British Library’s Japanese collections is a small, rather ordinary-looking, leather-bound volume, generally known as Feiqe monogatari (BL shelfmark Or.59.aa.1). Despite its appearance, it is, in fact, a remarkable work in a number of ways. Firstly, it was one of the earliest books printed in Japan using movable type rather than the traditional woodblocks, secondly, it is the first non-religious text printed in colloquial Japanese transcribed into the Roman alphabet, offering valuable insights into the phonology of the Japanese language in the 16th century, and thirdly, it is the world’s only extant copy.

Now, thanks to a collaborative project between the British Library and the National Institute for Japanese Language and Linguistics (NINJAL), Tokyo, a fully digitised version of this unique work is available online along with transcriptions, as part of NINJAL’s  Corpus of Historical Japanese, Muromachi Period Series II : Christian Materials.  In addition to a full set of images, NINJAL has also provided transcriptions of the Romanised text and in mixed Japanese kanji/kana script.

The book contains three different texts bound together: Feiqe monogatari a version of the Heike monogatari 平家物語 or Tale of the Heike, a famous medieval epic about the rivalry between the Taira and Minamoto clans, Esopo no fabulas the first Japanese translation of Aesop's Fables, and an anthology of maxims, drawn from Chinese classics, called the Qincvxv (Kinkūshū 金句集). 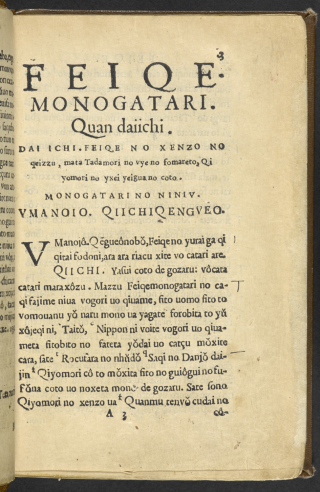 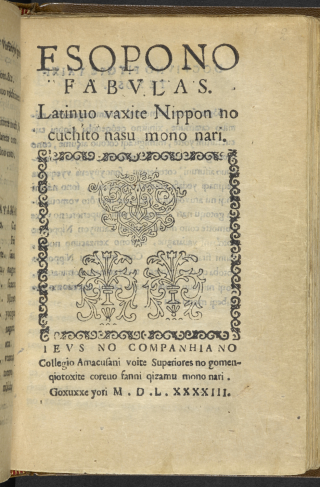 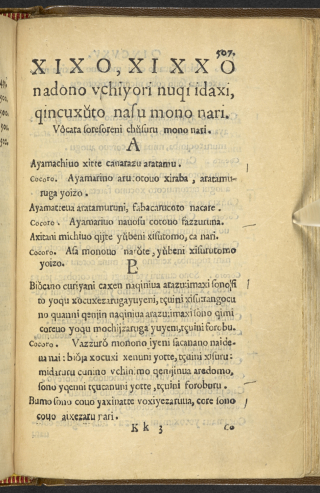 All three were printed on the Japanese island of Amakusa by Jesuit missionaries using a movable-type printing press in late 1592/early 1593. Feiqe monogatari has a preface dated 10 December 1592, the title page of Esopo no fabulas is dated 1593 and a general preface added at the front of  the volume was completed on 23 February 1593.

The three texts are accompanied by a printed glossary of ‘words difficult to determine’ (funbetsv xinicuqi cotoba) found in Feiqe monogatari and Esopo no fabulas.  At the end of the book is a handwritten Japanese-Portuguese vocabulary. 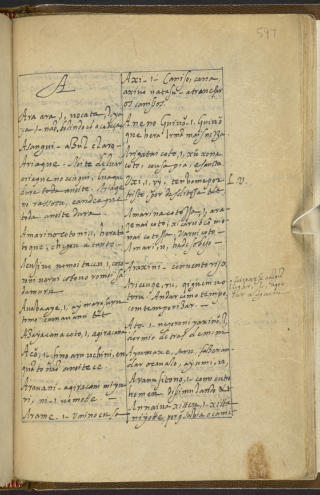 From the preface of Feiqe monogatari we know that it was the work of the Christian convert - and later apostate - Fabian Fucan (Fukansai 不干斎, c. 1565–1621). Fabian was baptised in 1583 and joined the Jesuits in 1586, teaching Japanese to missionaries in the Jesuit College in Amakusa. He later rejected Christianity and in 1620 published the anti-Christian tract Deus Destroyed (Ha-Daiusu 破提宇子).

When the first Christian missionaries arrived in Japan in the 1540s they immediately set themselves to learning the Japanese language. Their aim, of course, was to convert the population to Christianity and to do this they needed to be able to communicate its teachings in the local language. They made rapid progress and with the help of Japanese converts, soon began translating Christian texts into Japanese. To assist with their work, Alessandro Valignano, head of the Jesuit Mission in East Asia, had a movable-type printing press brought from Portugal. It reached Japan via Goa in July 1590 and was set up at the Jesuit College in Kazusa 加津佐, on the Shimabara Peninsula, where the first work, a life of the apostles and saints entitled Sanctos no gosagyveono vchi nvqigaqi (Sanctos no go-sagyō no uchi nukigaki サントスの御作業の内抜書), was printed in 1591. Shortly afterwards, in the face of official persecution, the College and press were moved to the more remote and safer location of Amakusa 天草 where printing resumed in 1592. The College on Amakusa was suppressed by the Japanese authorities in 1597 so the Jesuits moved again, this time to Nagasaki, taking the press with them and books continued to be printed there from 1598 to 1611.

The books produced by the Jesuit Mission Press in Japan between 1591 and 1611, almost exclusively religious in content, are known collectively in Japanese as Kirishitan-ban or “Christian publications”. The majority were translations of Christian texts widely read in Europe such as Doctrina Christaã, Guía de pecadores and parts of Introducción del símbolo de la fe, in some cases adapted to the Japanese context with additional explanations or omission of doctrines which might have provoked controversy.

The Japanese authorities increasingly came to regard Christianity as subversive and, following a series of repressive measures, it was eventually suppressed and all remaining missionaries expelled from Japan in 1639.

The precise number of Kirishitan-ban titles printed in Japan is not certain.  With the suppression of Christianity and the destruction of images and artefacts connected with it, most of the Jesuit printings were lost.  In his pioneering work The Jesuit Mission Press in Japan, 1591–1610 published in 1888, Sir Ernest Satow identified 14 titles. Kirishitan Bunko: A Manual of Books and Documents on the Early Christian Mission in Japan (1940) by Johannes Laures, identifies 30 books published by the Jesuit Mission Press but this includes 5 printed in Macao, Goa or Manila. A more recent publication, Kirishitan to Shuppan (2013), lists a total of 41 Kirishitan-ban (including 5 fragmentary texts) with 92 extant copies identified worldwide, 7 of them in the British Library.  For the 35 works published in Japan, it lists a total of 72 known copies.

Besides its rarity, Feiqe monogatari is important in that it is a literary rather than a religious text..  It was not intended for the education of Japanese Christians but for the missionaries themselves as an aid to learning the language and to understanding the history and values of the Japanese for whom the warrior code (bushidō), reflected in Heike monogatari, and the Chinese classics represented by Kinkūshū had great significance. 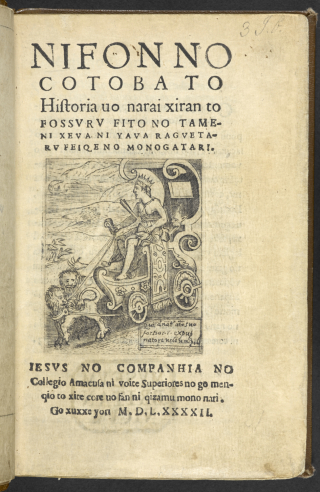 First page of preface to Feiqe monogatari (Or 59.aa.1, ftpr)

The spelling conventions of Portuguese, together with differences in pronunciation of the time, mean that the Romanised texts appear unfamiliar to those used to Hepburn, Kunrei-shiki and other later systems. For example, comparing spellings to the Modified Hepburn transliteration system most widely used today: ‘c’ and ‘q’ are used instead of ‘k’ depending on the following vowel (‘c’ before ‘a,’ ‘o’ or ‘u’, ‘q’ before ‘e’ and ‘i’), while ‘x’ represents ‘sh’ before ‘’i’ and, unlike modern standard Japanese, also before ‘e’. The letter ‘v’ can represent either the vowel ‘u’ or the semivowel ‘w’. The bilabial fricative sound now Romanised as ‘h’ (or ‘f’ before a ‘u’) is written as ’f’ in all positions, presumably reflecting the pronunciation of the time. ‘tçu’ is the equivalent of ‘ts’. As in Portuguese spelling, ‘u’ is inserted after ‘g’ to maintain a hard sound before ‘e’ or ‘i’.

The opening sentence on the first page reads: Nifon no cotoba to historia uo narai xiran to fossvrv fito to tameni xeva ni yavaragvetarv Feiqe no monogatari [The Tale of the Heike made easy to help those wishing to learn the language and history of Japan] which would be written in Modified Hepburn as Nihon no kotoba to historia o naraishiran to hossuru hito no tame ni sewa ni yawaragetaru Heike no monogari, or in Japanese script as 日本の言葉とhistoria [歴史]を習い知らんと欲する人の為に世話に和らげたる 平家の 物語.

Another interesting aspect of Feiqe monogatari is that while not the oldest, it was the first book in the British Museum/British Library’s Japanese collections. The preliminary pages of the volume bear a succession of shelfmarks and annotations from which it appears that the book was acquired by the eminent collector Sir Hans Sloane (1662-1753) in the first years of the 18th century. The earliest number is R3594, one of many sequences used by Sloane. Research published by Amy Blakeway in The Library Catalogues of Sir Hans Sloane: Their Authors, Organization, and Functions (http://www.bl.uk/eblj/2011articles/pdf/ebljarticle162011.pdf), suggests that the R-sequence was used for a rather random can be dated to between 1712 and 1723.  Sloane has also added the erroneous description in his own hand “Fables in the Language of Tonquin” (i.e. Vietnam). After Sloane’s death his vast collections became the foundation of the British Museum and its library and were installed in Montagu House. The number on the titlepage (3Ib) is a Montagu House location, showing that the book was stored in room 3, press I, and on shelf b with other works on Mythology. The book was given the general shelfmark 1075.e. but was later considered to be important/valuable enough to be moved to a case pressmark C.24.e.4.  A subsequent reorganisation of the British Museum Library saw it being transferred to the Department of Oriental Manuscripts and Printed Books (OMPB) where shelfmarks beginning “Or.” were assigned - Or.59.d.6 and, later, its current number Or.59.aa.1.  As part of OMPB Feiqe monogatari passed to the custodianship of the British Library in 1973.

Its role as a teaching tool for non-Japanese missionaries gives Feiqe monogatari is greatest significance today - that it is written in colloquial, rather than literary Japanese and is printed in the Latin alphabet, not in Japanese script.  The Japanese written language was, and is, extremely complicated combining many thousands of Chinese characters and two different syllabaries.  Using the 26 letters of the Latin alphabet made the task of writing and printing much simpler and meant that the text was easier for the Jesuits to read.  Since at that time there was no standard way of transcribing Japanese, the missionaries simply wrote down what they heard often using the spelling conventions of their native Portuguese.  For the study of Japanese historical linguistics, therefore, Feiqe monogatari is a very valuable source of information for how the language was actually spoken and pronounced in the late 16th century.

In a way that will be familiar to all who have ever tried to learn a foreign language, whenever they were unable to find the correct Japanese translation of a word the missionaries and their Japanese helpers seem to have simply used the Portuguese word instead. So "Aesop's Fables" becomes "Esopo no fabulas” and “history” is “historia” rather than the expected Japanese words gūwa 寓話 and rekishi 歴史respectively. 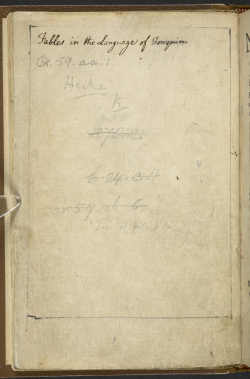 Sadly, no record has been found of how Sloane acquired the book or from whom. Between 1723 and 1725, Sloane purchased a substantial collection of Japanese books, manuscripts, natural history specimens and other material from the family of the German physician Engelbert Kaempfer (1651-1716) who had lived in Japan from 1690-92 as physician in the Dutch East India Company’s trading base in Nagasaki. However, as noted above, a study of the shelfmarks and other annotations suggest that Feiqe monogatari was acquired by Sloane before the Kaempfer collection. It is known that the Jesuits sent some of their publications back to Europe – either to Rome or to their influential benefactors. Recent research by Peter Kornicki has shown that Japanese books reached England during the 1620s, sent to wealthy patrons by the East India Company through its trading factory in Hirado. Dutch traders also continued a supply of books back to Europe, some of which would have circulated among collectors like Sloane.

One final mystery is the illustration on the front page of the volume which depicts a crowned classical figure in a chariot pulled by lions. Neither the image nor the Latin inscription have no obvious connection to the content of any of the contained works. Perhaps this was an etching or woodcut that had been used in another work and was simply inserted here as decoration. If any readers of this blog recognise it, I would be delighted to hear from them.

With thanks to Dr Karen Limper-Herz, Lead Curator for Incunabula and 16th Century Books, British Library.

Laures, Johannes, Kirishitan Bunko: A manual of books and documents on the early Christian mission in Japan. Tokyo: Sophia University, 1940.

Orii, Yoshimi, “The dispersion of Jesuit books printed in Japan: Trends in bibliographical research and in intellectual history”. Journal of Jesuit Studies 2 ; 2 (2015).  https://brill.com/view/journals/jjs/2/2/article-p189_2.xml?lang=en