Of unicorns and other oddities: an 18th century Persian medical manual

Visitors to our current exhibition Harry Potter: History of Magic will doubtless be familiar with the unicorn and will have noted the exhibit, illustrated below, from the Histoire Générale Des Drogues, Traitant Des Plantes, Des Animaux Et Des Mineraux…. (Paris, 1694), by Pierre Pomet (1658-1699), chief druggist of Louis XIV. However they might be surprised, as I was a few weeks ago, to learn that this engraving had been faithfully copied in a Persian translation commissioned by Tipu Sultan of Mysore (r.1782-1799). 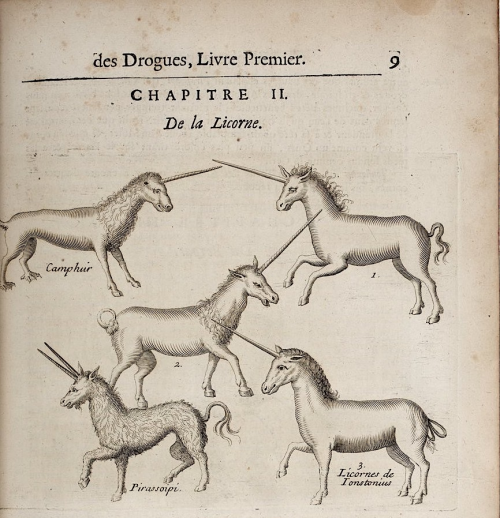 Above: Pomet’s engraving of five different kinds of unicorns including the camphur and the two-horned pirassoipi (more on this in our post “How many horns does a unicorn have?”).
Below: our copy followed by an explanation in Persian. The horn was apparently especially recommended as an antidote to poison. 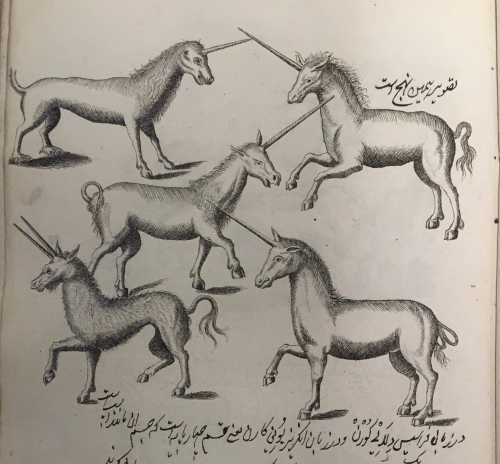 Our manuscript, Mufradāt dar ʻilm-i ṭibb, ‘A dictionary of medicine’ (IO Islamic 1516), is a translation, or rather selective paraphrase, of the complete Histoire and contains almost exact copies of all Pomet’s engravings with the exception of two scenes[1]. Without any details as to translator or source, it is described on the flyleaf simply as a translation ordered at the request of Tipu Sultan (farmūdah az ḥuz̤ūr) and in a damaged English label on the binding as “translated from European works - with good etchings.”

The Persian text, following Pomet, is divided into three parts, the first containing nine books (kitāb) on seeds, roots, trees, the properties of bark, leaves, flowers, fruits, gums and juices. Each book is further subdivided into illustrated chapters (ṣūrat). The second part consists of 54 chapters on creatures (ḥayvānāt) and the third part, unillustrated, contains five books on minerals, metals, bitumen (gil'hā), stones and on the use of different kinds of earth for medicinal purposes and dyes. 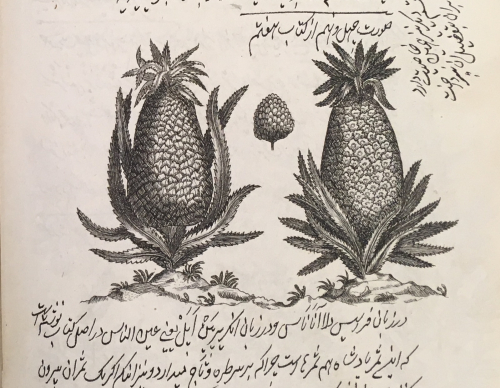 Each section begins with a transcription of the French and English term, followed by a paraphrase of Pomet’s description. The paraphrase is usually considerably shorter than the original, omitting technical terms and sources presumably deemed irrelevant, and the details are often slightly different. The illustrations are not unlike the plants and animals which feature in the many copies of the popular encyclopædia ʻAjāʼib al-makhlūqāt ‘Wonders of creation’ by the 13th century al-Qazwīnī (see also our post “The London Qazwini goes live”). These would therefore have resonated well with the reader who would have been familiar with the genre and would also have appreciated the more exotic elements of Pomet's descriptions for entertainment value.

There are several drawings, however, which have no equivalent in Arabo-Persic traditions. One of these is an illustration of the techniques of mummification. The drawing is accompanied by a detailed account of different methods of embalming and a discussion of the medicinal properties and uses of parts of the body, especially the skull. 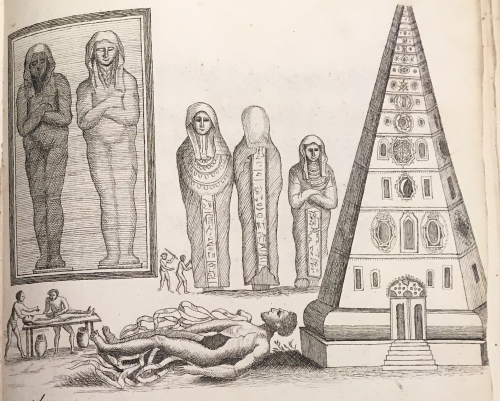 Perhaps most intriguing are the ‘action’ scenes which illustrate collection and manufacturing processes. In the drawing below, for example, we see a hive, bees swarming, and a man ‘calling’ the swarm to follow him. At the foot are the rotting corpses of a lion and an ox from which bees are spontaneously self-generating. The theory of spontaneous generation, put forward by Aristotle and other ancient philosophers, whereby some living organisms were created from non-living ones was prevalent in Europe until the 18th century. Certain insects, in particular, were thought to have originated from putrefying flesh though by Pomet’s time this theory was already becoming discredited through the work of scientists such as Francesco Redi. In his chapter on bees, Pomet makes no mention of the dead lion featured in his engraving (probably a biblical allusion), though he does refer by name to Virgil’s account (Georgics BkIV: 281-314) of the ‘autogenesis of bees’ from a dead bullock citing an apparently unsuccessful contemporary experiment in which a bullock was beaten to death, dismembered and its parts put in a box with ventilation holes to encourage the bees to develop. The Persian translation repeats all this — but without reference to Virgil!

Chapter 30: In French ‘Vers a soie’ (var ā swā) and in English ‘Silkworms’ (silk varms). Silkworms were and are in great demand in France. Someone who wants to cultivate silkworms should do the following: he should feed a female cow for a month before it is due to give birth on mulberry leaves and not give it anything else. When the calf is born the cow and calf should both feed on mulberry leaves for another month. After a month the calf is slaughtered and every bit of it from head to hoof, together with its bones and flesh, bit by bit should be put in a box. Holes should be drilled in the four corners and they should keep the box in a cold place. Then the worms will be produced… 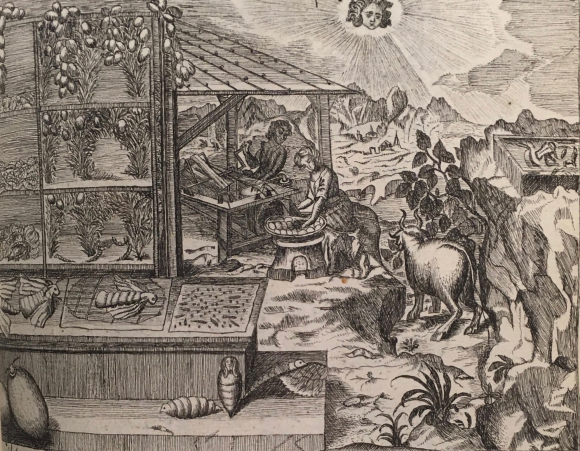 The cultivation of silkworms was one of Tipu Sultan’s great interests, though there is some evidence to suggest that a form of sericulture existed in Seringapatam prior to his father Hyder ʻAli’s death in 1783 (S. Charsley, “Tipu Sultan and sericulture for Mysore”). In 1785 and 1786 Tipu Sultan wrote to Mir Kazim, his agent at Muscat, with instructions to procure silkworms (Kirkpatrick, Select letters, pp. 188, 283). In another letter of 1786 to the Governor of the Fort at Seringapatam, he mentions that worms are being brought from Bengal and expresses a desire “to know, in what kind of place it is recommended to keep them, and what means are to be pursued for multiplying them.” According to Kirkpatrick a set of instructions issued to the Revenue Department in 1794 mentions 21 separate silkworm breeding stations throughout his kingdom.

However, it is doubtful whether Tipu Sultan ever experimented in sericulture along the lines recommended by Pomet. While testifying to the remarkably universal appeal of Pomet's pharmacopoeia, this translation should be seen rather as one of several undertaken by Tipu Sultan in an attempt to become familiar with European medicine. Further examples of translations of this kind in his library collection (unfortunately not illustrated) are IO Islamic 1649: Qānūn dar 'ilm-i ṭibb, a translation into Persian of A Compleat English Dispensatory by John Quincy (d. 1722), and IO Islamic 1452, Tarjumah-i firang, a translation of The Nature and Cures of Fluxes by William Cockburn (1669–1739).

A handbook of Ethiopian magic incantations and talisman art

Currently on display in our exhibition Harry Potter: History of Magic are two intriguing items from Ethiopia: an amulet (Or.12859) and a magical manuscript (Or.11390). Ethiopian amulets and magical recipe books such as these are a striking and very distinctive form of Ethiopian Christian material culture, yet they remain a relatively poorly understood and understudied topic. Part of a rich magical literature of incantation, these manuscripts are also adorned with a variety of illustrations which were created for spiritual edification and for protection from real or imagined harm. While Christian icons were intended to promote spiritual growth, Ethiopian magical art consists of visual representations of the world of demons and evil spirits, making the invisible visible for all believers. 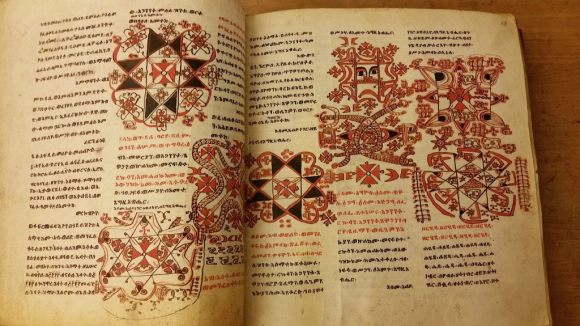 An Ethiopian magical recipe book, 1750. These pages contain talismans and geometric images used for making amulet scrolls, and are accompanied by prayers for undoing spells and charms (BL Or.11390, ff. 12-13)

Practitioners’ handbooks such as the recipe book portrayed above, are remarkably difficult to decode for the reason that they were intended as purely personal documents for personal use only. This annotated, magical recipe book is written in Ge’ez, also known as classic Ethiopic. It contains a rich collection of amulets, talismans, charms and incantations. From the marginal notes, we can guess that it belonged to a practitioner of magic, an exorcist (dabtara), who would have been a highly educated, ordained layman. Dabtaras typically study for several years or come from families of clergy. Since medieval times, they have worked in the courts or have taught in small parish schools, supplementing their income by producing amulet scrolls and practising traditional medicine. 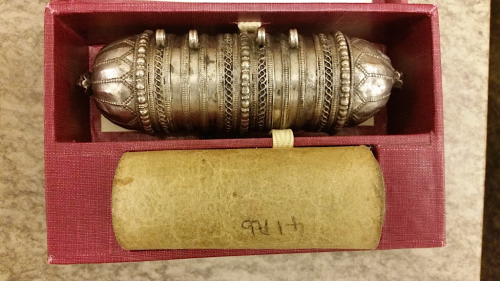 Amulet scrolls, one with a protective cylindrical case. Ethiopia, 18th century (BL Or.12859)

Handbooks are the main source used for producing amulets and talismanic drawings. Amulets, written on leather or metal, have been worn by Ethiopians and other peoples in the Horn of Africa for thousands of years. This practice remains strongest in the northern Highlands of Ethiopia, where amulets are believed to bring health, to protect babies and to ward off the evil eye. The parchment scrolls themselves are known as Ketab, and they vary considerably in length. They are kept in leather cases, or, as shown above, in a cylindrical silver case, which can be hung up at home or worn around the neck, depending on their size. This particular scroll contains prayers for undoing spells (maftehé seray), after which the talismanic drawings were added, giving effect to its powers. The drawings have a specific purpose: they are intended to cure sickness, to exorcize demons and to protect those taking long and difficult journeys.

An example of a talisman, is the eight-pointed star below, with four vertical and horizontal arms and a human face in the centre. The magical properties of this figurative drawing lie in the hidden symbolism. The eight-pointed star is a common motif, but has no traceable roots, appearing also in Islamic and Jewish Kabbalistic tradition. Harry Potter: A History of Magic is open in the British Library PACCAR Gallery until Wed 28 Feb 2018.