As part of our holdings at the British Library, the India Office collection of medals can now be found on the Explore Archives and Manuscripts online catalogue.  The extensive collection includes more than 500 medals, which range from campaign medals, orders of knighthood, as well as  decorations. This blog features a few of the eighteenth century medals issued to Indian officers.

The earliest campaign medal issued and in the collection is the Deccan Medal 1778-84. The Deccan medal, issued in either gold or silver, was issued by the East India Company to Indian officers who fought in Gujarat for the 1st Maratha War of 1778-82 and in the Carnatic during the 2nd Mysore War of 1780-84. The Deccan Medal, here in silver, features on the obverse a figure of Britannia seated on a military trophy, holding a laurel wreath in her right hand out towards a fort where the British flag is flying. A Persian inscription that reads: Presented by the Calcutta Government in memory of good service and intrepid valour, AD 1784, AH 1199 is in the centre on the reverse. Around the circumference of the medal on this side is written: ‘Like this coin may it endure in the world, and the exertions of those lion-hearted Englishmen of great name, victorious from Hindostan to the Deccan, become exalted.’ 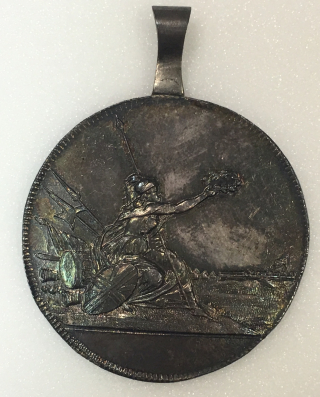 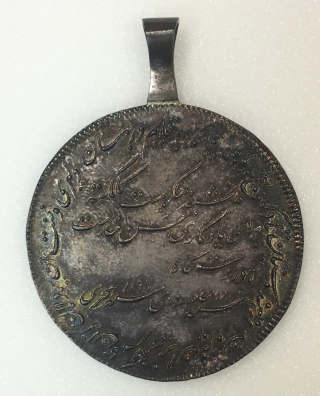 During the 3rd Mysore War of 1790-92, the Mysore campaign medal was issued in either gold or silver, by the East India Company to Indian troops who fought against Tipu Sultan. The Mysore Medal, here in silver, features on the obverse a sepoy with his foot resting on a dismounted cannon with a fortified town in the background. Inscribed on the reverse is For Services in Mysore AD 1791-1792 in four lines within a wreath, with a Persian inscription outside the wreath that reads: ‘A memorial of devoted services to the English Government at the war of Mysore. Christian Era, 1791-1792, equivalent to the Mahomedan Era, 1205-1206’. 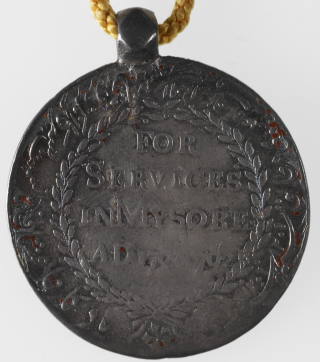 During the 4th Mysore War of 1799, both British and Indian officers who fought at Seringapatam, were presented with the Seringapatam medal. This was issued in silver-gilt, silver, bronze or pewter. The Library's collection holds 84 Seringapatam campaign medals (Foster 4005-4089). On the obverse is a representation of the storming of the beach at Seringapatam with the meridian sun signifying the time of the storm. Below this image is a Persian inscription that reads: 'The Fort at Seringapatam, the gift of God, the 4th May 1799'. The reverse shows a lion subduing a tiger with a banner overhead that shows the Union badge and an Arabic inscription that reads: 'The Lion of God is the conqueror'. 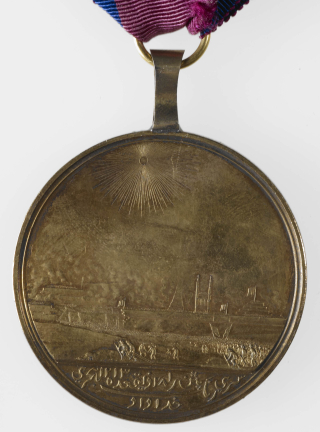 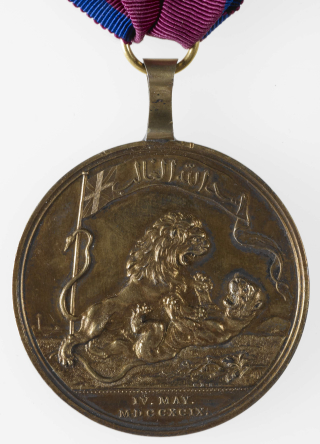 India Office medals can be viewed by appointment only in the Print Room, Asian and African Studies Reading Room. For further details and appointment requests, please send an email to apac-prints@bl.uk.

J.H. Mayo, Medals and decorations of the British army and navy, 2 volumes (Westminster, 1897)