Arts of the South Asian Sultanates at the British Library

The British Library holds one of the richest and most diverse collections of fifteenth-century South Asian manuscripts belonging to the sultanates. In association with a recent symposium, Connected Courts: Art of the South Asian Sultanates hosted at Wolfson College, Oxford, from 20-21 September, the library held a study session for a group of scholars who work on manuscripts, literature, and architecture. This viewing session provided a rare occasion for researchers of varying disciplines to share ideas on these manuscripts and discuss the interplay of different traditions. 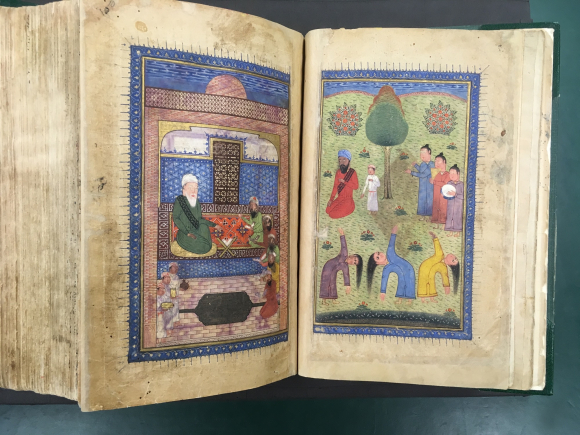 An initial group of manuscripts invited us to consider how and where the Persian narrative tradition spread across South Asia. Persian literature was certainly known, copied and enjoyed in India since at least the late thirteenth century. However, the earliest surviving manuscripts date to the fifteenth century. A copy of the Shāhnāmah of Firdawsī (Or 1403, fig. 1), dated 1438, contains illustrations that do not fit with contemporary Persian painting traditions, and has no colophon providing a provenance. Certain scholars have concluded this manuscript must have been produced elsewhere. There are various factors that suggest a South Asian origin, perhaps the Deccan region under the Bahmani sultanate. An intervention in the preface recounts Firdawsī’s journey to India and his visit to the Delhi court, not usually found in Persian copies of the Shāhnāmah. 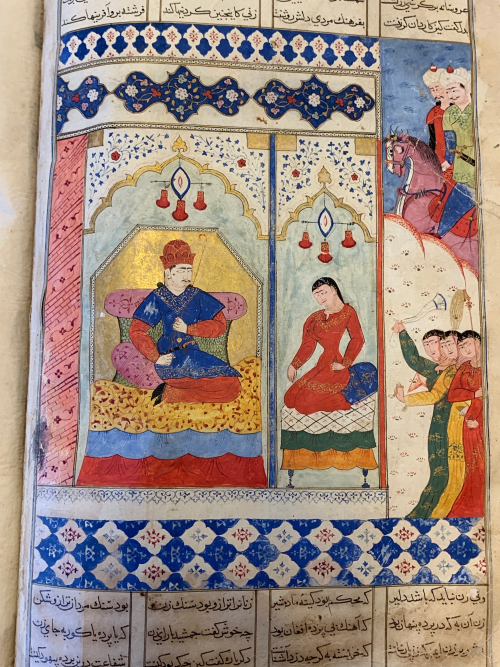 Another manuscript viewed at the session was a copy of the Sharafnāmah (Or 13836, fig. 2), dated 1531 and produced for Sulṭān Nuṣrat Shah, ruler of Bengal (r. 1519-38). The text is from Niẓāmī’s Khamsah (Quintet), and is the first half of the Iskandarnāmah that describes the conquests of the Alexander the Great, the last poem of the quintet. This slim volume contains nine vibrant paintings that show the assimilation of both Indic and Persian artistic traditions. Such adaptations were common to several fifteenth-century manuscripts from the Indian sultanates. 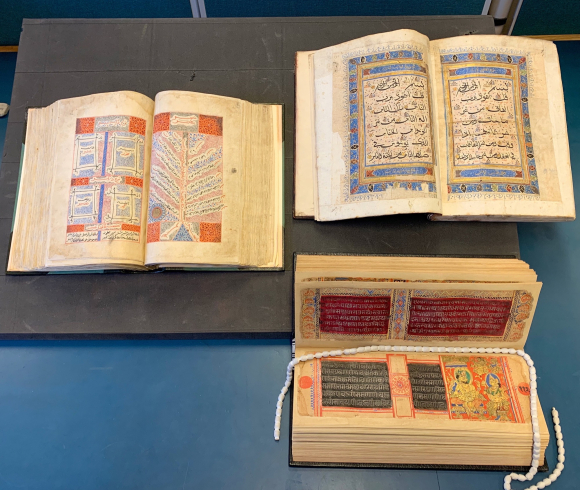 Within the second grouping of manuscripts a Qur’ān (Add 5549) was juxtaposed with an anthology of Persian poetry (Or 4110), and a Sanskrit work of Jain scriptures, all created in fifteenth-century India (IO San 3177) (fig. 3). Although each of these manuscripts is written in a different language they come into dialogue in their use of script and ornament. The Qur’ān’s interlinear Persian translations are inscribed in the naskhī-dīvānī script similar to the Persian anthology of poetry. The illumination and deep red and orange floral ornament used in the Jain Kalpasūtra and Kālakācāryakathā bear striking resemblances to illumination in the Persian anthology and Qur’ān. While we know such similarities exist in theory, viewing these manuscripts together highlights these connections and opens new paths for research. 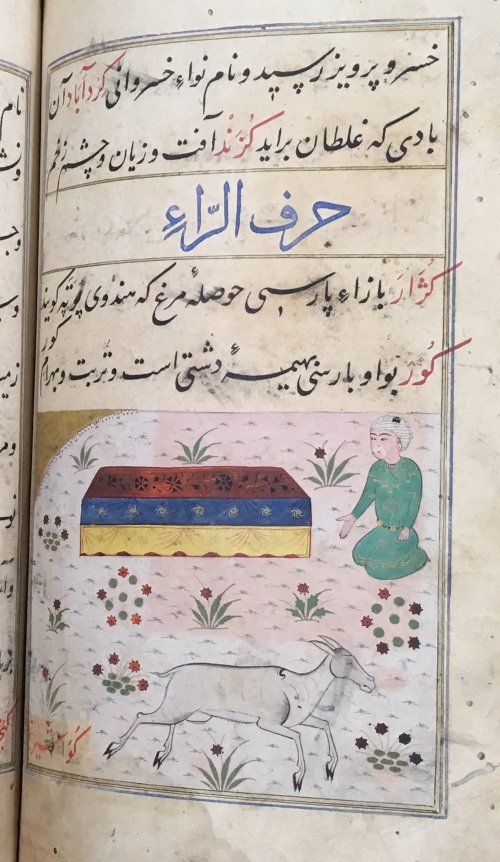 A final grouping brought together three manuscripts from the court of Malwa. Beyond the Ni‘matnāmah (Book of Delights), the British Library holds a few other manuscripts associated with the court of Malwa, based primarily in the capital of Mandu, each of which is entirely unique. The multilingual intellectual Muḥammad ibn Muḥammad Dā’ūd Shādiyābādī authored both of these manuscripts. The first is a multilingual Persian illustrated dictionary known as the Miftāḥ al-Fuz̤alā (Key of the Learned, Or 3299, fig. 4) and the second is a Persian adaptation of al-Jazarī’s twelfth-century book of automata, the ‘Ajā’ib al-Ṣanā‘ī (Wonders of Crafts, Add 13718). This group of manuscripts from Malwa revealed how rich the libraries of fifteenth-century India were—long before the Mughals—and how we can place the Ni‘matnāmah within a larger context.

The opportunity to view these manuscripts with other specialists in the field allowed us to imagine more vividly the inter-connected world of the sultanates, and will no doubt inspire further research. We are grateful to Ursula Sims-Williams, Malini Roy, and Saqib Baburi for their help in organizing this session, and the support of the Barakat Trust, Khalili Research Centre, and Iran Heritage Foundation.

Through the support of the Heritage Lottery Fund, the Purvai Project at An Lanntair cultural centre in Stornoway has curated an exhibition celebrating the life of Colin Mackenzie (1754-1821), one of the Isle of Lewis’ most famous 19th century explorers who travelled to India and Indonesia. Mackenzie was born on the Isle of Lewis but spent most of his life in India working for the East India Company as a military engineer and surveyor. He saw action across South India, including at the Battle of Seringapattam (1799) against Tipu Sultan, and also spent two years in Java (1811-1812/13) as part of the British occupation force during the Napoleonic Wars. After his return from Java (Indonesia), Mackenzie was appointed the first Surveyor General of India in 1815. He held this post until his death in 1821. He is buried in Park Street Cemetary in Kolkata. The exhibition Collector Extraordinaire brings together a selection of drawings, coins and sculpture collected by Mackenzie from the collections of the British Library, the British Museum and the Victoria and Albert Museum. For the first time ever, these collections have travelled so far north to Stornoway. 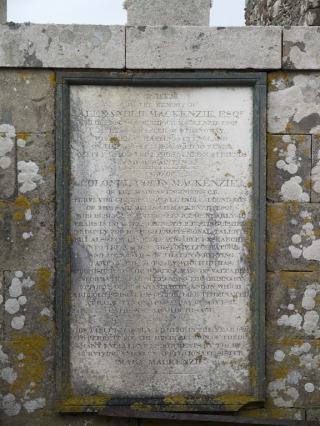 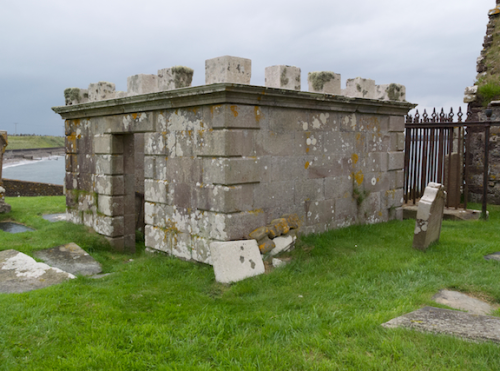 Mackenzie was interested in the rich history and culture of the lands in which he travelled and worked. He surveyed numerous sites of historical interest, including, famously, the stupa at Amaravati. During his long residence in India, Mackenzie, helped by his local assistants, amassed one of the largest and most diverse collections made here. The tens of thousands of objects in his collection ranged from coins to small bronzes and large stone sculptures, as well as natural history specimens, drawings, and both paper and palm-leaf manuscripts. After his death in 1821, his widow, Petronella, sold his collection to the East India Company for Rs100,000 (£10,000). Most of this material is now held at institutions in the UK and India, including: the British Museum, British Library, V&A, Chennai Government Museum, and the Indian Museum in Kolkata.

The British Library's collection includes more than 1,700 drawings collected by Mackenzie during his career in India. A selection of thirty-two drawings on a range of topics, from sculpture and architecture in India to antiquities in Java either drawn by Mackenzie or under his supervision, are currently on display in the exhibition. Additionally, the well known portrait of Colin Mackenzie painted by the British portraitist Thomas Hickey in 1816 is featured. The drawings are complemented by a number of sculptures and coins from the British Museum and the Victoria and Albert Museum. Highlights include: 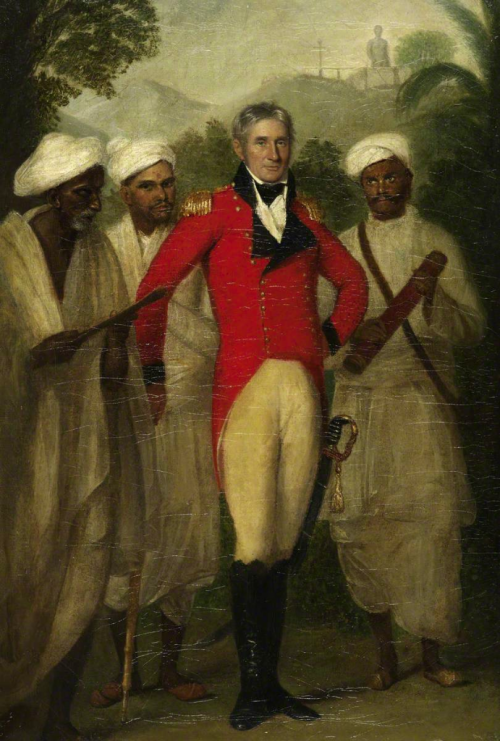 Portrait of Colin Mackenzie painted by Thomas Hickey in 1816. Mackenzie, wearing scarlet uniform, is accompanied by three of his Indian assistants. In the distance is the colossal Jain statue of Gomatesvara at Karkala. British Library, Foster 13 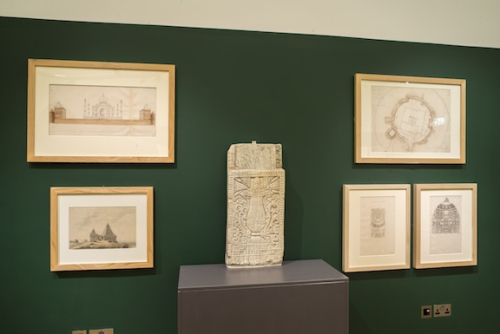 Selection of drawings and plans relating to the Buddhist stupa at Amaravati as well as a limestone panel with a high necked vase called a Pūrṇaghaṭa (dating to circa 8th-9th centuries) from the British Museum (1880,0709.68) are on display. Photograph by John Falconer, 2017 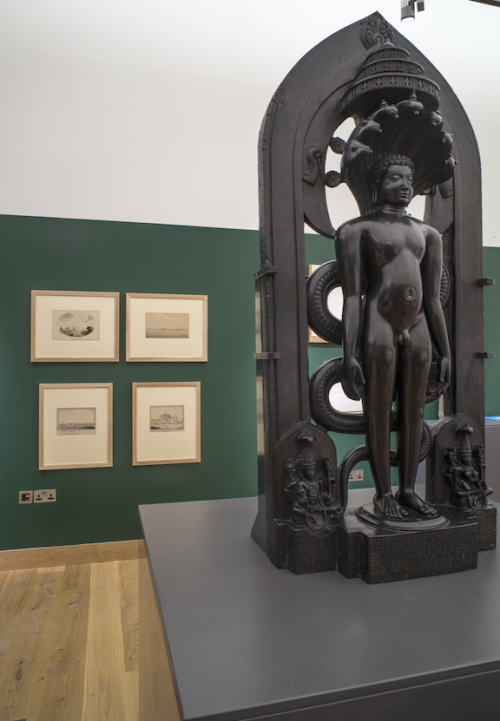 Exhibition also features the Jain sculpture of Parvanatha from the Victoria and Albert Museum (931 IS) which dates to the late 12th century - early 14th century and found by Mackenzie in a ruined Jain temple in Karnataka. Photograph by John Falconer, 2017

The exhibition 'Collector Extraordinaire' is on view at the An Lanntair and Museum nan Eilean from 12 August to 18 November 2017. The exhibition is curated by Catherine Maclean and is part of Storoway's Puravi festival.

Jain manuscripts in the British Library

The Jain manuscripts currently in the British Library collections have a long history and were formerly held by two distinct institutions, the British Museum and the India Office Library.

Built over a period of more than two and half centuries, from the earliest acquisitions of 1753 (in the British Museum’s Sloane and Harley collections), to the latest in 2005, the collection includes works in Sanskrit, Prakrit, Hindi, Gujarati and Rajasthani and in view of its size (over 1000 items), range of material and state of preservation, it is one of the most important outside India. Aḍhāī-dvīpa, ‘Two and a half continents’. Painting on cloth, 18th century (British Library Or 13937)

Most of the Jain manuscripts originally belonged in several individual collections acquired in India during the 19th century by Indologists and employees in the service of the East India Company (among them H.T. Colebrooke, G. Bühler, W. Erskine, H. Jacobi, C. Mackenzie, A.C. Burnell). The subject areas and literary traditions represented are numerous and diverse: canonical, ethics, ritualistic, narrative, astronomy, astrology, mathematics and music. 33 Jain manuscripts are now available online in Digitised Manuscripts. 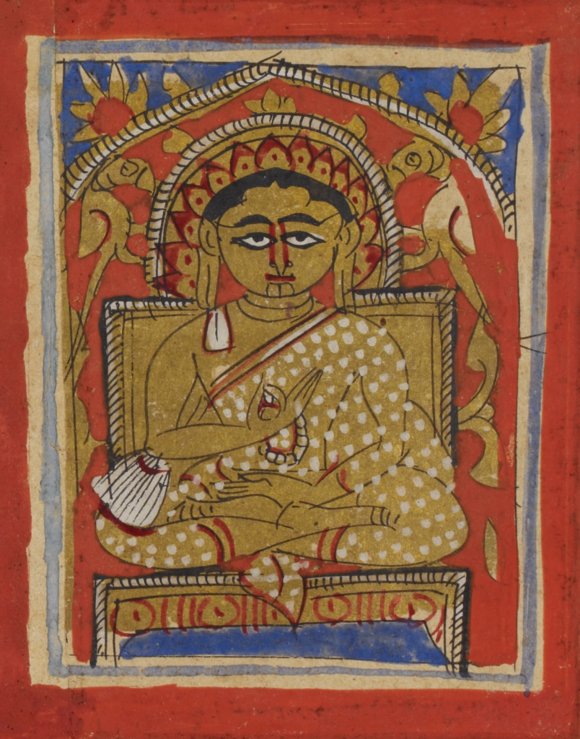 Miniature of Gautamasvāmin seated, in the typical Śvetāmbara monastic dress and holding a rosary, 15th century (British Library Or 2126A)

The selection includes rare and valuable palm leaf manuscripts such as Or 1385B, the oldest Jain manuscript in the British Library dated 1201 CE, several Kalpasūtra versions, some of them illuminated (i.e. Or 11921, Or 14262 and Or 13959),  and a 15th century manuscript of the Śrīpāla-kathā (Or 2126A) and IO San 3177, which contains the manuscript used by Hermann Jacobi for his edition, translation and glossary of the Kālakācārya-Kathānakam of 1880 (at that time the only known written version of the legend). Finely illustrated, it is also an amazing example of Jain calligraphy.

Folio from the Saṁgrahaṇīratna by Śrīcandra in Prakrit with interlinear Gujarati commentary. The miniature depicts the Pancaparameṣṭhins on Siddhaśilā, 17th century (British Library Or 2116C)

Beside poetical compositions like the Ādityavāra-kathā (Or 14290),  there are cosmological treatises such as Śrīcandra’s Saṁgrahaṇīratna (Or 2116C) and three Aḍhāī-dvīpa (‘Two and a half continents’), illuminated diagrams representing the world inhabited by human beings according to Jain cosmology (Add Or 1812, Add Or 1814 and Or 13937).

More digitised Jain manuscripts from the British Library and other collections in the UK are available at Jainpedia: the Jain universe online.